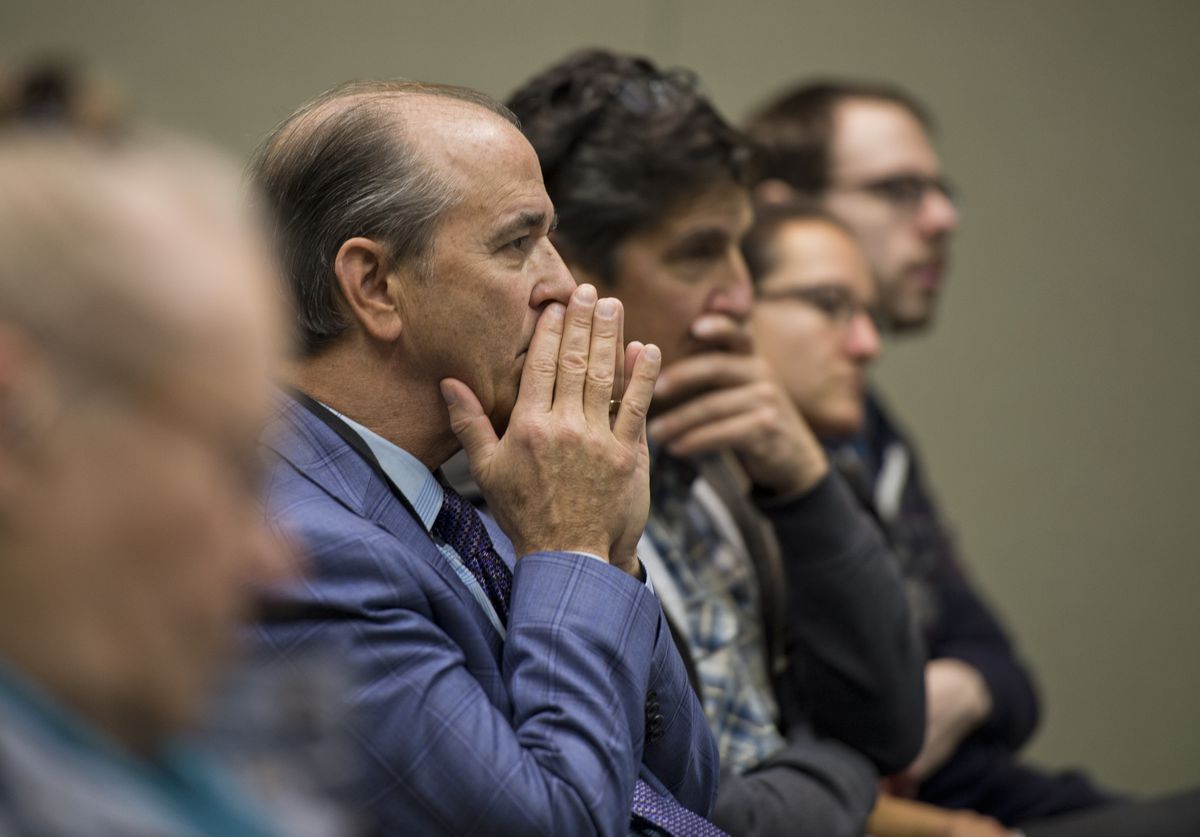 Mark Wiggin, deputy commissioner for Alaska’s Department of Natural Resources, listens as bids are announced. Alaska’s Division of Oil and Gas hosted an oil and gas lease sale for the North Slope and Beaufort Sea regions at the Dena’ina Center in Anchorage on Wednesday. (Marc Lester / ADN)

Mark Wiggin, deputy commissioner for Alaska’s Department of Natural Resources, listens as bids are announced. Alaska’s Division of Oil and Gas hosted an oil and gas lease sale for the North Slope and Beaufort Sea regions at the Dena’ina Center in Anchorage on Wednesday. (Marc Lester / ADN)

Major oil companies did not bid Wednesday on state leases near the Arctic National Wildlife Refuge as Congress moves to open the refuge's coastal plain to drilling, but small bidding groups did.

And new North Slope prospects generated interest in the annual state lease sale that officials said was one of the biggest of the last two decades.

The state received $19.9 million in bids for the North Slope lease sale on Wednesday, making it the third-largest sale in the last two decades, said Chantal Walsh, director of the Alaska Oil and Gas Division. That was a surprise because so much of the land in the region had already been leased, she said.

The amount of leased state land on the North Slope is at historically high levels, said Mark Wiggin, deputy commissioner of the state's Natural Resources department.

Alaska officials opened bids for the lease sale at the Dena'ina Center in Anchorage. The state also received $1.3 million in bids for leases in state waters of the Beaufort Sea.

The federal government also held a lease sale for the National Petroleum Reserve-Alaska on Wednesday afternoon. The Trump administration offered 900 tracts in the 23 million-acre reserve, the most ever.

ConocoPhillips and partner Anadarko made up the only bidding group in that sale, for seven tracts totaling 80,000 acres, said Ted Murphy, associate director of the BLM in Alaska. Bids totaled $1.2 million, for acreage near ConocoPhillips' existing prospects in the petroleum reserve's eastern section, including the large Willow discovery. Alaska receives 50 percent of the bids.

The companies were major bidding partners in an NPR-A lease sale last year that generated $18.8 million for 614,000 acres, the largest lease sale there in more than a decade.

The "measly" seven tracts were sold at $14.99 an acre in NPR-A, Miller said. At that price, leasing out the entire 1.5 million-acre ANWR coastal plain would generate $11 million in federal revenue. That's well below the $1 billion claimed by the Trump administration, she said.

Andy Mack, Alaska Natural Resources commissioner, said it's "inappropriate" to compare a single NPR-A lease sale in an area that has already had several lease sales with an "open-range" prospect with as much promise as ANWR. The NPR-A lease sale was the 13th sale since 1999.

ANWR, if leasing is allowed, has far greater potential for a big lease sale in part because of the huge estimate of oil there, said Mack. The federal portion of the coastal plain could contain 7.7 billion barrels of technically recoverable oil, according to the U.S. Energy Information Administration.

"The biggest point is this is wide open, with not one existing lease in this area," Mack said of ANWR.

The recent, large Pikka discovery east of NPR-A and the Willow discovery within NPR-A have raised interest in the state and federal lease sales.

At the state lease sale, Repsol E&P USA, a subsidiary of Spanish multinational Repsol, was the high bidder on acreage near the large Pikka prospect. Repsol is a partner in the prospect, which experts have said could produce at least 120,000 barrels of oil daily.

Repsol is looking to maximize its opportunity at Pikka, said Jason Sebastinas, a senior landman for Repsol, after the bid opening.

On several leases, Repsol outbid a partner in the project, independent Armstrong Oil and Gas of Denver. Repsol made its decision to bid at the 11th hour following a long administrative process, leading to the unexpected dueling bids with a partner, Sebastinas said.

ConocoPhillips also was the high bidder on tracts not far from Pikka and near its Kuparuk River unit.

Far to the North Slope's eastern flank, near the doorstep of the 19 million-acre ANWR, the state offered offshore tracts and a few onshore tracts. The tracts could generate strong interest if Congress succeeds in opening the refuge's coastal area to drilling as part of the tax bill that appears likely to pass.

Much of the state acreage near ANWR is already part of ExxonMobil's Point Thomson Unit, leaving limited onshore acreage available for leasing.

Major oil companies did not bid on the tracts near ANWR.

But the bidding group of individuals Dan Donkel and Samuel Cade won rights to offshore tracts in the state waters near ANWR. The tracts are extremely promising for a large oil discovery, Donkel said by phone Wednesday.

"There is room to boom for small oil companies on the North Slope of Alaska," said Donkel in an emailed statement.

A new company, Regenerate USA, outbid Donkel and Cade on a group of onshore tracts just west of the wildlife refuge.