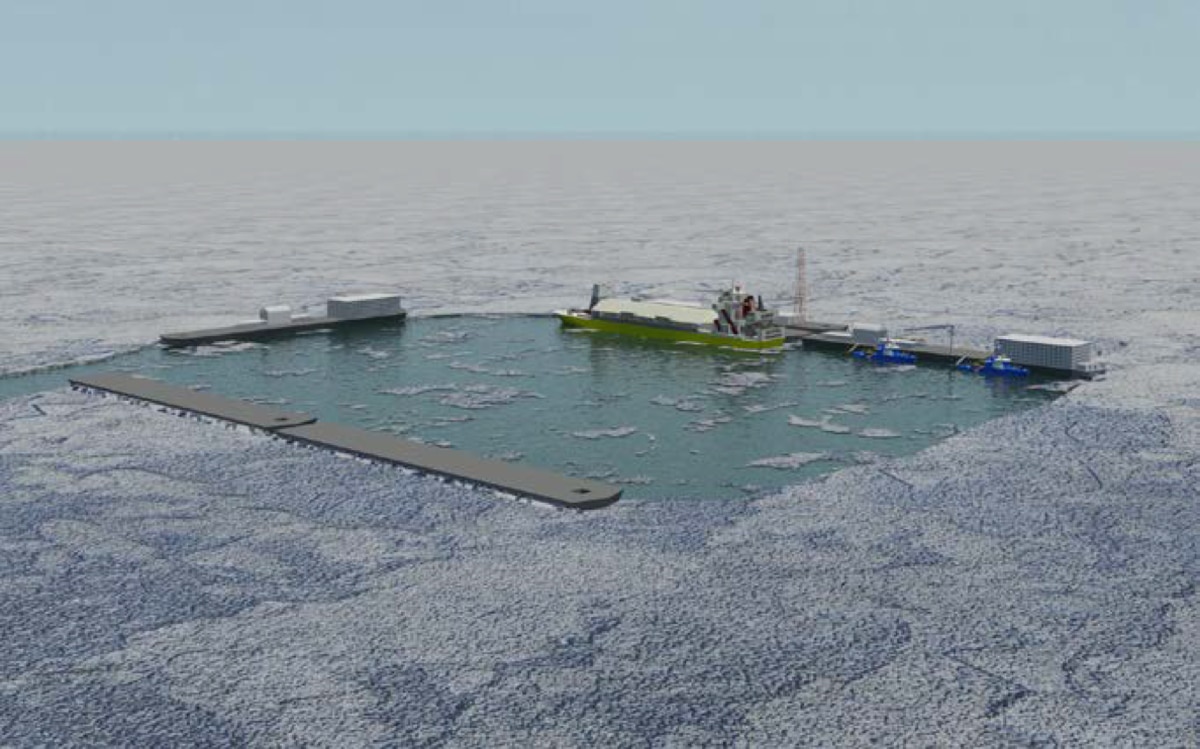 Others say that's a poor idea.

But technology has improved and sea ice has thinned, and North Slope LNG exports should be closely examined, said Mead Treadwell, former chair of the U.S. Arctic Research Commission and former lieutenant governor.

The plant would sit in an ice-protected harbor built from giant steel walls secured to the seafloor by their massive weight.

LNG plants generate heat and could keep the harbor water just above freezing. Icebreaking LNG carriers would be loaded there for delivery.

Components of the idea are already used in other projects, said Clarke, who has worked on the concept with Treadwell.

"(North Slope exports) should be cheaper than Alaska LNG because you don't need a pipeline and it's easier to build in phases," Clarke said.

In December, the Yamal LNG project in northern Russia began shipping gas in LNG icebreaking tankers. A second project being built off Russia's Arctic coast will use a harbor with protective structures held in place by weight, Clarke said.

Some of the Russian gas will reach Asian countries after it's shipped through the Bering Strait, Treadwell said, steaming by Alaska and potentially competing with Alaska LNG.

Keeping crews and getting supplies to the remote region would add huge extra costs compared to a Nikiski terminal, he said.

"The amount of money we would spend to winterize a large facility up there would pay for the pipeline," Meyer said.

Alaska LNG is deep into the effort to win federal approval. Starting in 2012, the state, ExxonMobil, BP and Conoco spent some $500 million studying Alaska LNG.

The oil companies backed out in late 2016, citing the project's lack of global competitiveness.

The state has trimmed cost estimates and in November announced potential new investors, signing a nonbinding deal with three Chinese-owned giants, including oil company Sinopec and Bank of China.

Inked as part of President Donald Trump's trade mission to Beijing, it might result in major Chinese investments. Or, it might not.

Both a gas line project and the less-studied North Slope LNG exports have been considered for decades. The gas line has gotten the most attention, but multiple versions of it have failed, with high costs often blamed.

"The big project has the problem of requiring tens of billions of dollars of investment over a decade before anything flows out of it," Heinze said.

The shipping distance to Shanghai is similar from the Prudhoe Bay gas fields and from Nikiski, said Treadwell. The trip is about 4,000 nautical miles, with Nikiski about 50 miles closer.

"Prudhoe Bay is shallow and ice-locked for much of the year," she said.

Out of Nikiski, sea ice would be far less problematic while infrastructure and vessel support would be much greater.

Treadwell said he's encouraged the state gas line corporation to study North Slope exports, without success. He said initial study might cost $2 million to determine if the idea could work.

"I think Alaska should not do anything to abandon the current efforts for Alaska LNG, but we should understand what our cost options are," said Treadwell, president of PT Capital, a private equity firm specializing in Arctic investments.

"PT Capital has no economic interest in this project," he said. "I consider getting North Slope gas to market one of the great unsolved mysteries of the Arctic."

In summer 2016 the Alaska LNG project, then led by ExxonMobil, gave federal regulators multiple reasons North Slope exports were not studied in detail, including that new technology is untested in the region.

Also, nixing the pipeline meant no gas deliveries to Alaskans — a key part of Alaska LNG. Partly for that reason, the detailed work to determine costs, feasibility and risks was not done, project officials said.

Treadwell said there are options to replace lost in-state gas delivery, such as energy subsidies if the idea is profitable.

Meyer said the agency has no plans to study the idea further.