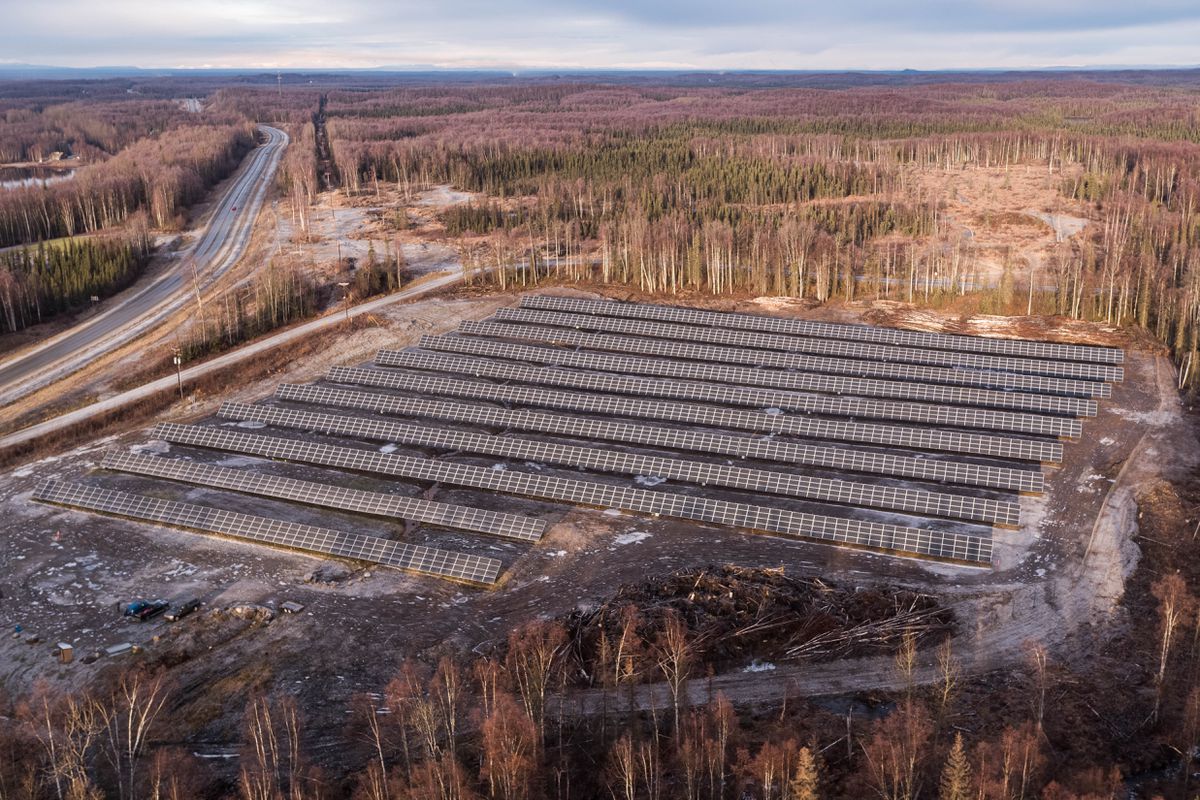 WILLOW — The sun is about to take its annual vacation from much of Alaska but Jenn Miller’s team will be ready for its return.

The now-1.2 megawatt facility installed last year by the Renewable IPP group on a 17-acre property along the Parks Highway near Willow has expanded from a 140-kilowatt pilot project.

Miller said the initial concept for a commercial-scale solar farm stemmed from the positive results she and other Renewable IPP members experienced after outfitting their homes with solar arrays in 2017. What they learned from those endeavors gave them the confidence to believe they could successfully have a community-wide impact with more solar panels.

“We just said, let’s do one big system and see how that goes,” Miller recalled in an interview.

The 140-kilowatt test case went well enough that the four-person team quickly began working on the expanded solar farm, which is expected to come online in December. When it does, it should generate enough electricity to power about 200 homes.

Renewable IPP reused old oil and gas drilling pipe to build the support structures that hold the 3,240 solar panels to reduce the environmental impact of the project.

Miller said an outpouring of support from nearby Willow residents has been the biggest surprise since starting work on the first phase of the project early in 2018.

Matanuska-Susitna Borough Mayor Vern Halter is among those supporters. Halter lives about a half-mile from the solar farm and acknowledged his initial skepticism in the project.

“The first time Jenn and her husband came on my lot and said they were going to put a solar farm on this property I thought, ‘Man, they’re nuts.’ With hard work and dedication — look at what happened — so it’s a great day in the Mat-Su Borough,” Halter said during Renewable IPP’s Nov. 15 re-opening celebration.

About half of the funding for the $1.5 million project was financed through the Alaska Energy Authority’s Power Project Fund loan program; the rest came from private capital. AEA Executive Director Curtis Thayer said in an interview that the Renewable IPP team approached the state-owned authority with their loan proposal barely six months ago.

“They came to us with a solid business plan and we were able to put a financing plan together,” Thayer said.

MEA CEO Tony Izzo said the solar farm will increase the amount of renewable-sourced power the utility uses from 12 percent to 15 percent of its overall generation portfolio. The vast majority of MEA’s renewable generation is hydropower from the state-owned Bradley Lake hydro facility on the Kenai Peninsula.

Integrating solar power into its grid has been a learning experience MEA officials have shared with the Renewable IPP team, Izzo said, adding it’s also something the member-owned utility’s customers expect more of. The utility recently hired a grid modernization expert to study what upgrades need to be made to its power transmission and distribution network to make it easier to accept more renewable power.

“We’re looking to the future and meeting members’ needs,” Izzo said. “A lot of them have expressed a desire for us to reduce our carbon footprint.”

Determining the best sites within its broad service territory — which stretches from Eagle River and Matanuska Glacier to the south and east and Denali State Park to the north — for future renewable projects will be part of the grid analysis, according to Izzo.

Miller said finding an adequate location was one of the biggest challenges in developing their solar farm. The parcel is adjacent to the Parks Highway and the “three-phase” power lines paralleling the highway that are necessary for connecting to a new power supply. She said the group is already looking for another property for another solar farm.

Renewable IPP Chief Financial Officer Chris Colbert said the 11 rows of solar panels pretty much max out the property’s power producing capacity. That’s because the panels have to be positioned at about a 45-degree angle to capture as much sunlight as possible and putting them closer together would cause the rows of panels to start casting shadows on each other when the sun is at a low angle, Colbert explained.

Even with about 50 feet of space between the rows Colbert said shadows will reach the lower part of the arrays in December.

At that point the Renewable IPP team won’t worry too much about snow covering the panels because the fleeting early winter sun doesn’t provide for much power generation, Miller said. However, she noted that when the sun starts making its return in February, the reflective snow cover around the panels will help boost power production.