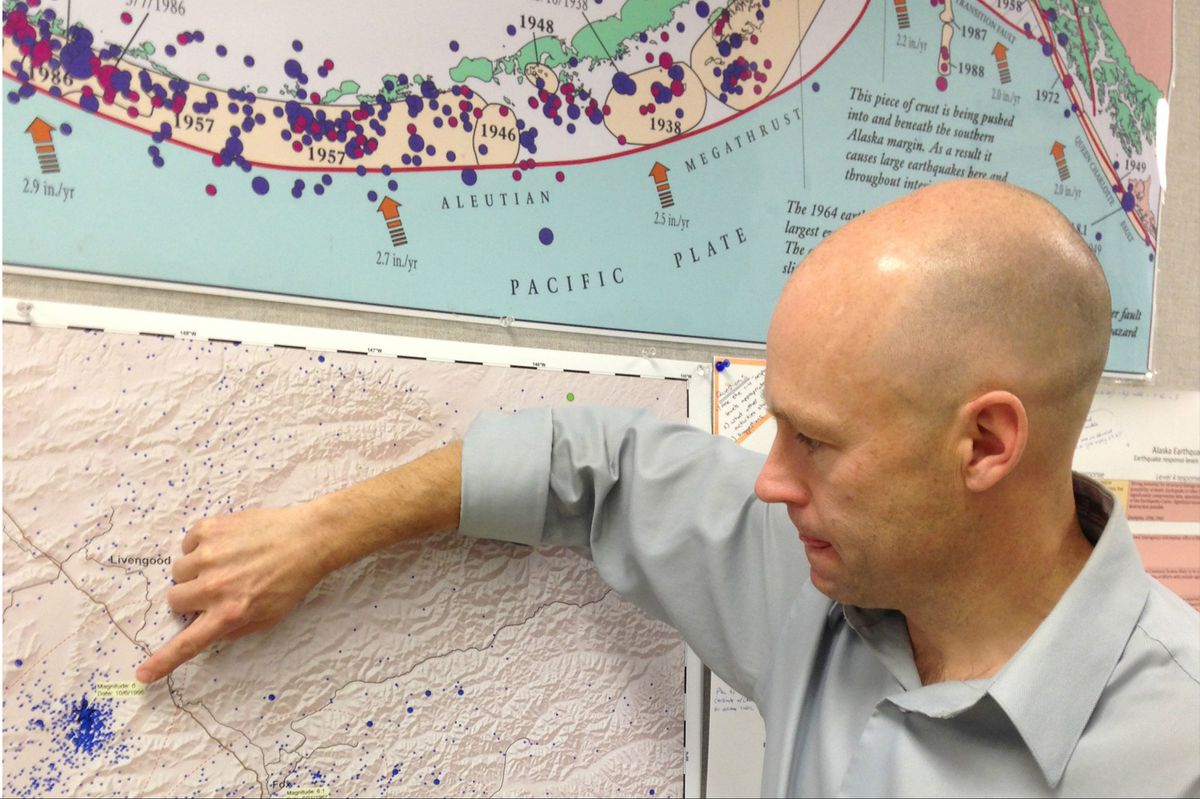 Sunday morning's magnitude-7.1 earthquake shook Anchorage neighborhoods with vastly different force even less than two miles apart, evidence that some pockets of the city are much safer than others.

The finding comes from one of the best urban seismograph networks in the country, conceived almost 20 years ago, installed a decade ago and receiving its definitive test Sunday.

"Since the network was installed more than a dozen years ago, this is the earthquake that people have been wanting to record from a data and research perspective," said state seismologist Michael West, who directs the Alaska Earthquake Center at the University of Alaska Fairbanks.

Instruments in the network show the strength of shaking compared to the strength of gravity. Sunday's measurements of 15% g in some neighborhoods -- or shaking that is 15 percent as strong as the normal acceleration of gravity -- are as high as Anchorage is believed to have experienced in the massive 1964 earthquake that transformed the region.

But that quake was 1,400 times stronger the Iniskin Earthquake, as Sunday's event is called. West said the '64 quake did vastly more damage with massively greater motion and much longer duration. The rupture in 1964 lasted 4 minutes, long enough to liquefy ground in Anchorage. The rupture in the Iniskin quake lasted only 10 to 15 seconds.

We felt Sunday's shaking much longer than that -- longer than a minute -- because of the soft geology of Cook Inlet and the weak soils under the city, factors that amplified and extended the impact. Figuring out those details is the point of the sensor network.

We've long known that the east side of town generally has stiffer soils and bedrock that resist shaking. The west side of town rests on a layer of clay that shakes readily and can turn to liquid with enough shaking.

After the 1964 earthquake, engineers and geologists tried to prevent rebuilding of some areas of the city where clay soils collapsed into slides that took down buildings. Downtown, they proposed allowing large structures only around Seventh Avenue, with land near the downtown bluffs restricted to parks and low buildings.

The experts succeeded in limiting development on some of the slides, including in Government Hill and on Fourth Avenue, where the federal government paid for a massive stabilization project.

But the city overruled the experts to allow rebuilding along the bluff near L Street downtown. In Turnagain, where scores of houses fell into cracks or sank into the ocean, new houses, roads and utilities were built over their ruins.

Earthquake experts have told me they would not live in those homes and they avoid some buildings downtown.

In the 1990s, UAF seismologist Nirendra Biswas began advocating for a system of instruments in Anchorage that would show how the ground moves differently over our varied soils. A thick network of 40 seismographs would operate continuously in fire houses, underground in drill holes, in high rises and parks, and elsewhere.

The network took many years to fund and build. West said it operates on shoestring funding through support from various agencies. Working out networking problems and other difficulties took years. Then came the long wait for the kind of large earthquake that could activate the strong-motion sensors and give detailed data.

"I think this is a huge teachable moment," West said. "We always tell people, 'It's better to build on this kind of soil and not on that. But now we can really show you.' … This is absolutely clear evidence that certain areas have shakier ground than other places."

UAA geotechnical engineer Joey Yang said the earthquake was the strongest he has ever felt. He immediately called Utpal Dutta, also a UAA engineering professor, who worked for years on the network with Biswas. They are excited about studying the trove of detailed data.

"Different types of soils have different response to seismic waves," Yang said. "This map is basically presenting our firsthand evidence of this phenomenon. We captured this event. We're lucky."

Yang said the information will help validate models that engineers use to design buildings in earthquake country. With extensive study, the data could also allow scientists to designate soils in different areas around town according to how they accelerate seismic shaking. That information could determine building design standards in closely defined zones.

A lot of work will come between now and then. One of the surprises from the raw data is the extreme variation and complexity of Anchorage's response to earthquakes.

"The important thing is that it is wildly different depending on where you are," West said. "I would be lying if I was to tell you I had all the answers to this. This is intriguing, and this is something that will hold engineers' interest for a long time to come. This is a data set that will have a whole lot of study."

Everyone who felt the earthquake got valuable data. Think of the shaking you felt in your own home. Now imagine the strongest of that jolt lasting for four minutes in a quake 1,400 times stronger, as happened 52 years go. While you're thinking about that, attach your book cases to the wall and do all the other things to be ready. Here's a list.

But as a city, we need to do much more. As West said, you can't really be prepared. That's the job of leaders, implementing the best advice of experts for safe buildings.

Brilliant professionals now dead, including architect Ed Crittenden and geologist Lidia Selkregg, tried to get Anchorage to do the right thing 50 years ago.

Structural engineer John Aho picked up the cause when he joined Anchorage's Geotechnical Advisory Commission almost 40 years ago. He fought projects like the Nesbett Courthouse, which was built on dangerously shaky ground, and high-rise buildings perched on the edge of the L Street slide.

I was fortunate to meet Professor Biswas almost 20 years ago, when he was proposing his idea for the seismograph network. He died almost exactly a year ago, before its big success.

I'm glad there's a new generation of seismic experts excited about carrying on what he started. I just wish we would follow their advice.

Charles Wohlforth's column appears three times weekly. He is the author, among other books, of "From the Shores of Ship Creek," the centennial history of Anchorage, which includes a chapter on the 1964 earthquake.