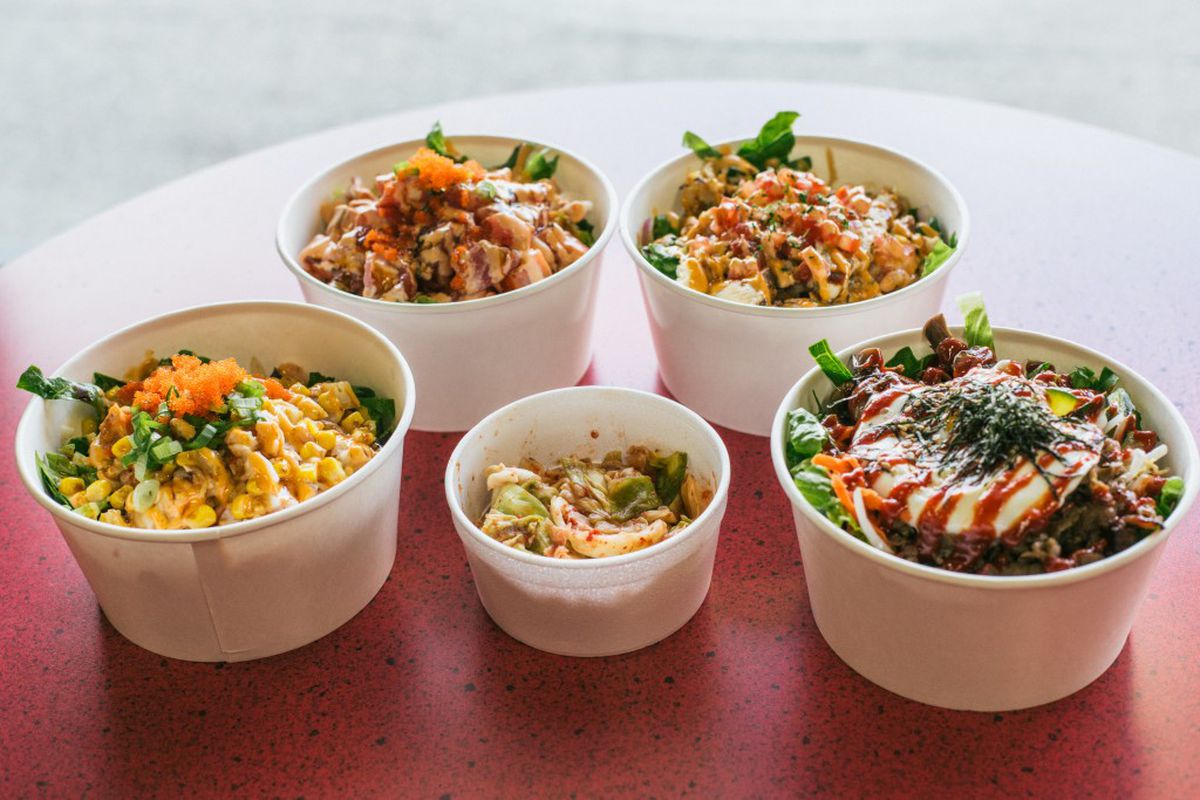 Some dishes from Top Bop are (clockwise from the top left): Poke Bop, Top Bop with Chicken, Bibim Bop, kimchi and Dynamite Bop. (Photo by Will Koeppen)

Some dishes from Top Bop are (clockwise from the top left): Poke Bop, Top Bop with Chicken, Bibim Bop, kimchi and Dynamite Bop. (Photo by Will Koeppen)

The uninitiated may wonder: What is bop? Simply put, it is steamed rice with mixed vegetable toppings, usually including a meat. "Soup without the broth," as one of my friends recently put it. "Or a rice and meat salad?" mused another.

Located in an otherwise-unremarkable strip mall on Muldoon Road, 7-month-old Top Bop is a shiny new kid on the block. Opened by four friends who grew up in Korea Town in Los Angeles, this Asian fusion restaurant with a Korean bent combines authentic food with modern, almost fast-food preparation and presentation techniques.

Catering to takeout diners, Top Bop's 60-seat capacity remained mostly unused during our one-hour stay. Nobody even tried the pop-a-shot basketball game. But a steady stream of customers visited to take their bop home to eat.

Fortunately, though the restaurant is mostly bop-based, there are eight rice bowl varieties. We ordered four of the essential Korean dishes.

We started with Bibim Bop ($7.99/$11.98), based on bibimbap, a traditional Korean dish featuring a bowl of warm white rice topped with sautéed vegetables and a variety of sauces. In a more formal setting, bibimbap is often served in a hot stone bowl, which continues to cook the ingredients as the meal is being eaten, but might burn your hand if you aren't careful.

Not so at Top Bop. Rather, the Bibim Bop arrives in a paper bowl, less medieval but more useful when it comes to taking food home and not scalding yourself. This version tops its rice base layer with rib-eye beef, lettuce, mushrooms, bean sprouts, zucchini, carrots, a red chili sauce called "gojuchang" and one egg, sunny side up.

And it's tasty; the quality rib-eye couples nicely with the spicy gojuchang. Unlike the other dishes, though, the rice stayed white instead of being flavored by the trickle-down flavornomics of the other bowls. But though simpler than its traditional counterpart, the Bibim Bop sacrifices little in taste.

Next, we tried the eponymous Top Bop ($6.99 regular/$10.98 large) with chicken (extra $1). This is the simplest of the rice bowl options, featuring meatballs, lettuce, tomatoes, onions and sauce over a steamed rice base. But "simple" isn't an insult; it was my favorite. The mixture of toppings and sauce infused the underlying rice layer, keeping the flavor consistent as we ate down past the toppings layer.

Our third dish, the Poke Bop ($8.99/$12.98), presents as a giant piece of diced sushi: salmon, tuna, masago and crabmeat mixed in with lettuce, cucumbers, onions and tomatoes, all over another bed of rice. It seemed to remind our whole dining party of the poke in Hawaii, or at least New Sagaya City Market. Though it was a little more expensive than the previous bowls, it didn't skimp: "There's a lot of meat on this," noted one of my friends. "These pieces of fish are larger than the cubes you get at the store."

The praise for this meal that would cost more than twice as much at a typical restaurant is echoed on Yelp; reviewers gave the restaurant strong reviews, but were over the moon about the poke.

Last, we tried the Dynamite Bop ($8.99/$12.98), featuring cooked shrimp, crabmeat, masago, lettuce, green onions, corn and sauce over rice. Unlike the first three spicy dishes, this bowl offered a surprisingly sweet taste and soft texture. It wasn't exactly Dessert Bop, but it was the closest we could get without buying the Kit Kat bars available at the cash register.

What if you just aren't in the mood for bop? Luckily, while bop constitutes most of the menu, it's not the only option. There are a few other items on the menu: Top Sandwich ($6.99), a dumpling dish called Top Mandu ($6.99) and some sides ($1.99 each). We tried the kimchi, which looks less fancy in a paper bowl than it would on porcelain in a more upscale Korean restaurant but tastes just as good — and costs less.

Top Bop co-founder Ken Kim was surprised to learn at the end of our visit that Top Bop was being reviewed. Only in business for seven months, he has seen business steadily rise, with many regulars coming in three or four times a week.

"My co-founders and I have known each other since junior high," said Kim, "and we wanted to go into business together. Anchorage needs more affordable Asian food. There isn't much here, and it's so expensive everywhere."

Whether for a meal itself, or for a car-ride pickup snack on the way to Denali, this roadside bop stop — reminiscent of a Korean Taco King — offers a delicious product at a very reasonable price.