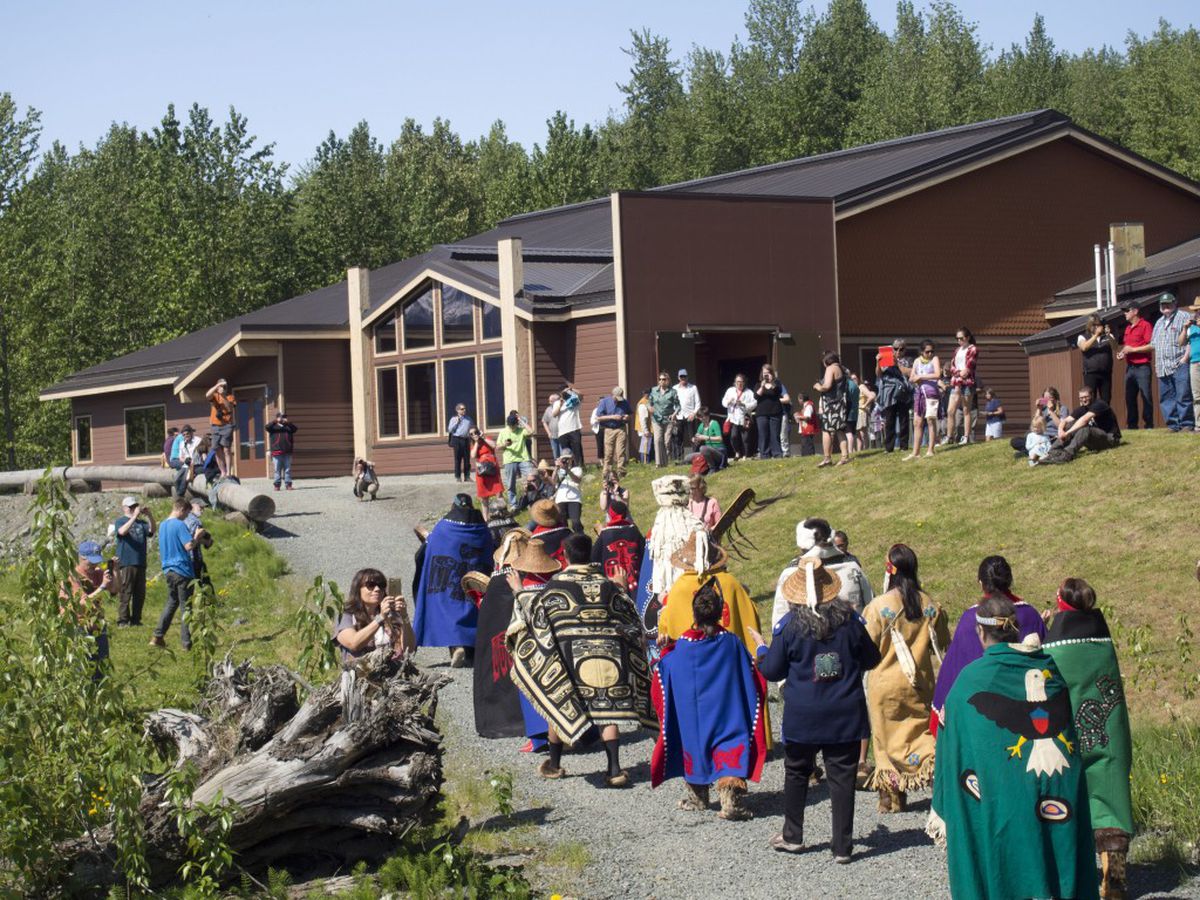 The Jilkaat Kwaan Heritage Center and Bald Eagle Preserve Visitor Center opened in the Tlingit village of Klukwan on May 14, 2016. (John Hagen / hagenphoto.photoshelter.com)

The Jilkaat Kwaan Heritage Center and Bald Eagle Preserve Visitor Center opened in the Tlingit village of Klukwan on May 14, 2016. (John Hagen / hagenphoto.photoshelter.com)

HAINES — Three hours of speeches in the hot sun at the grand opening of the Jilkaat Kwaan Heritage Center & Bald Eagle Preserve Visitor Center in the nearby Tlingit village of Klukwan on May 14 wilted me. My granddaughters, ages 2 and 4, were melting down, too. We were in charge, since our son-in-law danced with all other Tlingit dancers gathered for the event. Still, I know I wasn't as warm as he was in that black wool tunic with a Chilkat blanket over his shoulders and an ermine hat.

This was the first opportunity for most of us to see Whale House treasures that have been behind closed doors for decades, and for a time were even hidden in a Seattle-area warehouse under court order. The screen and house posts were carved in 1835 by Kadyisdu.axch and have been compared to the classical Greek Elgin Marbles. Alaska Indian Arts president Lee Heinmiller says that's because of the quality of the carving and design.

"Like most great sculptors, the artist didn't need to embellish with a lot of elaborate details," he said.

He said the carvings are like Michelangelo's "David," and look great without any fancy dressing up. The poles also tell the story of the people who have lived in Klukwan since, as they say, time immemorial.

Lani Hotch championed the idea of building a Tlingit cultural center in the center of her culture, Klukwan (population less than 100), rather than have the sacred art and artifacts housed in distant urban galleries. Lani says the large new tribal house-shaped Jilkaat Kwaan on the bank of the Chilkat River, "is not a museum that says 'this is how we were.' It honors our ancestors, but it also says 'this is who we are,' and ensures future generations will know that."

You may think the story here is how a tiny, typical Alaska Indian village with modest modern homes and old smokehouses could construct an $8 million facility like this, or how the women (mainly), and in particular sisters Lani Hotch and Kimberley Strong, made that so, and you'd be part right. When former state Sen. Albert Kookesh thanked them at the ceremony he choked up, and then laughed. "I tell you what — Lani and Kimberley? You don't want them chasing you around." He said he couldn't say no to those women.

They, however, were the first to credit others for the center's completion, noting that as far back as 1949 villagers began planning a local place to keep and display their valuables, many of which had been carted off by collectors. The sisters praised the Haines fundraising duo of Ann Myren and Cecily Stern, who took on the Klukwan project "as a matter of the heart," Lani said. Kimberley expressed gratitude for the backing of large foundations like Rasmuson, too.

"Since we began in earnest in about 2002, it's been one step forward, two steps back," Lani said. "But we never gave up."

The theme of this tale is rooted in healing, forgiveness and reconciliation — although there is still some grumbling, as this is Haines and Klukwan (it's in our collective genes). The Whale House artifacts story could have ended much differently. The first attempt in the late-1970s to remove the carvings, valued at the time at up to $2 million, from Klukwan and sell them was blocked when residents felled a tree across the village road. In 1984, a second attempt by the same clan, which keeps the key to the Whale House and claimed ownership, was successful and the artifacts made it as far as Seattle, where they remained locked up during years of legal battles over clan property versus private property, between art dealers, families, friends and even relatives in Klukwan and Haines. It could have destroyed the village, but instead, in many ways, strengthened it.

Lani's husband is a pastor, and she believes in providence. After she welcomed us to the opening, she said the ovoids in Tlingit form-line designs are the eyes of God — or, some say, "the ever-present spirit," whom she credited with the way the story unfolded.

In 1992, Lani, a master weaver, inspired by studying Holocaust survivors, gathered women to create a robe to heal the wounds from decades of oppression Tlingits suffered.

"It was a tangible object to begin healing generational trauma," she says.

They wove the robe upstairs in the Alaska Native Sisterhood Hall. Shortly after that, it was determined that the Whale House artifact case would be decided by a tribal court in the village. The trial began in February 1993 downstairs in the same hall the weavers used. Some days, the weaving stopped so the court could use the room for meetings. The very fibers in the healing robe held the space with the decision-makers, and in the end the Whale House artifacts were returned to the village.

Not only that, but the robe was completed in 2002, the same year the idea for the center took hold. Kimberley, now president of its board, wore the robe during the opening ceremony. Much of that history was barely alluded to at the grand opening, which also spoke volumes.

We took the hot and tired grandchildren home before the exhibit opened. We can see the Whale House artifacts anytime now. I hear they are magnificent, but that day, they weren't as important as having my granddaughters witness how two other sisters, who look more like them than I do, sang praises of their ancestors and traditions, and in doing so, have created a wiser, kinder world for the next generation of Tlingits and, for that matter, all of us.