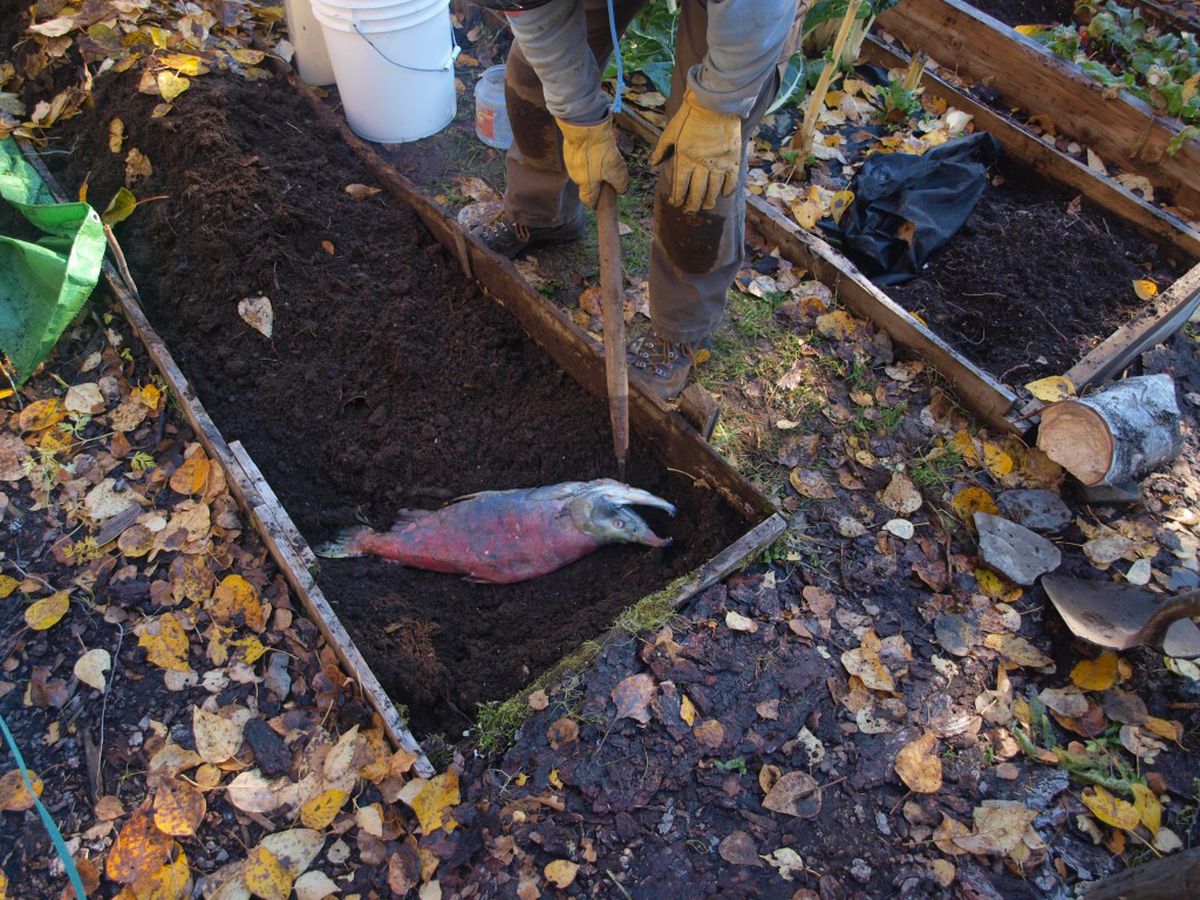 The fall ritual of burying salmon in the garden. (Steve Kahn)

The fall ritual of burying salmon in the garden. (Steve Kahn)

LAKE CLARK — An image from early school days always stayed with me: an illustration of a Native American assisting the pilgrims, showing them how dead fish buried alongside maize seeds help the plants grow.

To a kid it was an interesting and romantic notion, but not something I related to flourishing gardens in general. My parents used fertilizer for their garden, but it came in bags marked with three numbers and consisted of hard beads of several colors. We threw it on soil by the handful, like chicken feed.

My folks kept a compost bin, too, but cool Alaska temperatures kept the contents from breaking down. Eggshells took their sweet time. Don't even talk to me about avocado pits or nectarine seeds. My folks supplemented with horse and chicken manure, but it wasn't until I saw my grandfather's compost bin in Wisconsin that I realized making soil could be an art.

For our first years at Lake Clark, Anne and I spent so much time on construction projects that the garden got little attention. We pitched chemicals in the soil and plopped seedlings in the cold ground to fend for themselves. The results were less than stellar, and while we didn't feel good about it, we never gave the garden its due.

Somewhere around the time the "P" trap went in under the sink and the cardboard siding on the outhouse was replaced by wood, we finally turned to the garden. Improvements came gradually, and we eventually decided to try salmon instead of chemical fertilizer. OK, Anne was the one enthusiastically insisting we try fish, but I went along, hook, line and sinker. The results were stunning, but we didn't have the details mastered.

Plenty of spawned-out sockeyes wash up on the beach here every fall. Of course, brown bears are abundant, too. Since we didn't want the bears in the garden, we tried at first to get the timing right. We'd pick one of those perfect days late in the season when fewer and fewer bear tracks grace the beach, and the ground isn't frozen solid yet. That worked for several years.  But believing that I had critters figured out wasn't sound thinking. During one fall that should have been "safe" due to a bumper crop of finned fertilizer washing up on shore, we figured there was no way a bear would pay attention to a few fish buried in our garden.

One day, there were more than 100 dead salmon on the beach. So after getting out a gaff hook, rake and shovels, we went to work. We dusted each fish carcass with wood ashes and layered it with leaf mulch before covering it with soil.

The following morning, I looked down from our house on the hill to the garden and saw something amiss. Boards that formed our raised beds were broken and splintered. Soil was churned and turned as if by a rototiller with claws. It was a mess.

Anne often tells me I think like a wild animal, but I couldn't figure out why a bear would pass up relatively fresh fish on the edge of the lake for dirty ones covered with soil and ashes almost two feet down. Must be an acquired taste.

The frenetic furrowing by a neighborhood bruin jump-started our installation of electric fences. We strung the fences around both our garden and greenhouse. They worked well until something black and furry, likely a couple of black bear cubs, slipped under the bottom strand at the greenhouse enclosure. We added another strand closer to the ground and that seemed to solve the problem — until the following year when the energizer I had tested just two weeks before suddenly stopped pulsing. The result turned out to be a brilliant opportunity to hone my fence-repair skills and select and order a new energizer.

One October, needing to make a trip to town and not having time to bury our fish, we collected them in a drum. When Anne and I returned to the lake in early December, the fish were welded together by frozen slime. A crowbar and a fair amount of grunting allowed us to pry them apart, but the top few inches of garden soil was rock hard. I suggested we wait until the spring thaw, but Anne, whose head is as hard as a hard rock miner's, was determined to get the fish in the ground. "Whatever it takes" was her attitude.

It took an old steel axle, a pickax and several days of blasting away at super firm terra firma. Goggles kept flying frozen soil out of our eyes and a few choice cuss words didn't hurt either.

Not only do we bury fish in the garden, we also render fish emulsion to be used on indoor plants in our cabin and greenhouse. In the first few batches, we added a small amount of sugar to a 5-gallon bucket filled with salmon heads, entrails as well as handfuls of dry grass and sawdust. The airlock on the top of the bucket burped happily away. We strung the container from a pole hung from two tall trees to keep it from the bears, taking it down to stir a couple of times a week.

At first we were amazed that the odor was pleasantly sweet. Maybe it was the sugar addition. I thought I'd discovered something that had eluded chemists for centuries. But as the brew matured, it became increasingly rank — Limburger-on-a-hot-dashboard bad. We soon realized we could make emulsion just as easily by throwing salmon guts in a bucket and letting nature and time render it a wonderfully effective but whiffy product. Sugar or no sugar, it still works wonders on the plants. I make just three requests to Anne when she fertilizes the indoor plants: start early, open the windows and let me find something to do outdoors.

We've even taken to burning bones in our wood stove to add phosphorus to the ashes.

I'll be the first to admit that there are easier, less smelly ways of giving garden soil a boost, and our methods are not for everyone. Spawned-out salmon don't wash up in everyone's front yard. Folks who live with a greater density of bears, house cats, dogs — or neighbors with a keen olfactory sense — might be best served with more traditional methods. But salmon fertilizer is a big hit with almost all the plants we grow, although we do space the salmon out more for potatoes than for kale or lettuce. A huge plus is that we don't have to fertilize the main garden every few weeks. Other than a little compost addition when we plant seedlings, it's once the fall and we're done for the season.

We're hardly scientists, and we don't understand the nuances of why our recipe works. Experts would likely point out that fish adds a lot more than nitrogen, potassium and phosphorus to the soil. Growth of healthy plants is a result of complex interactions, and unlike chemical fertilizers, the nutrients in fish fertilizers are incorporated by the soil microbes and released slowly to plants, rather than leaching away to pollute rivers and lakes.

Fish as fertilizer for two semi-hermits at Lake Clark equals happy plants and bountiful harvests. Even though it's smelly at times, we are total converts. Hard to argue with success.