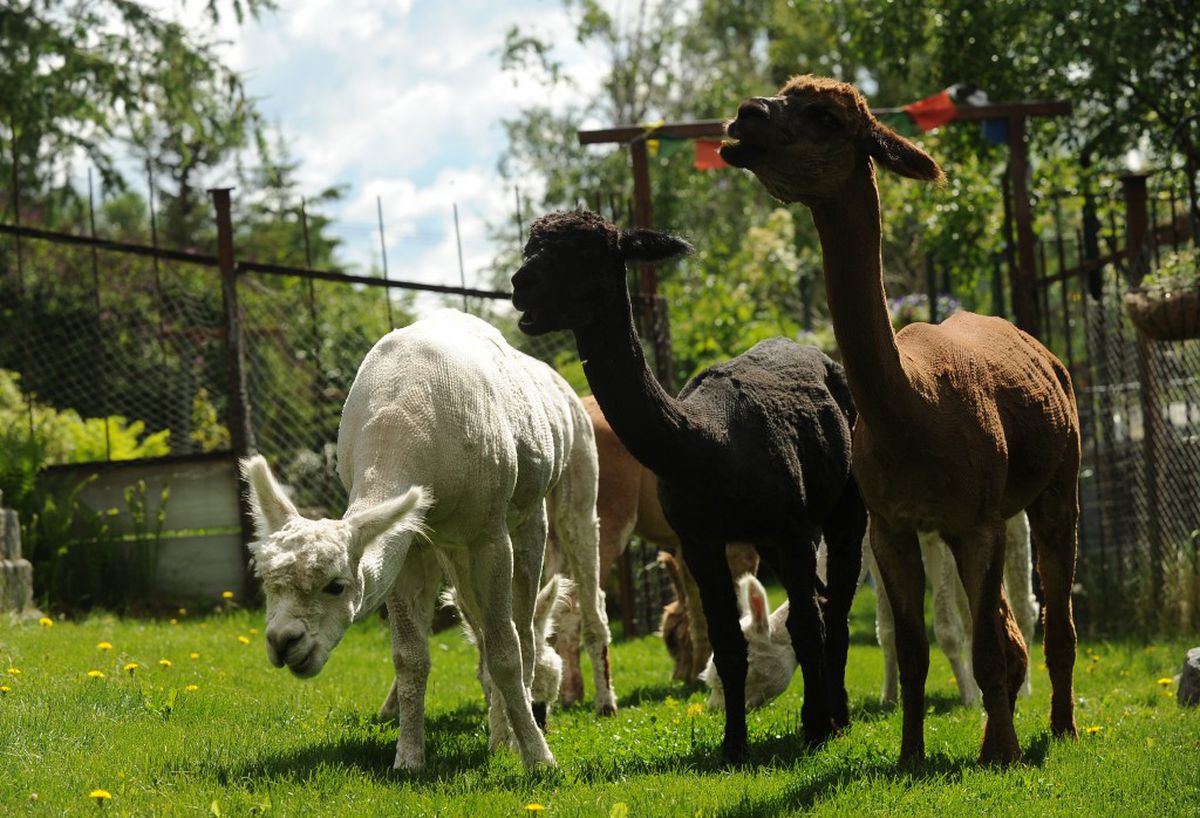 HOMER — I confess I fell in love with alpacas while watching a TV ad on vacation in Florida 13 years ago. After the initial infatuation, I researched alpacas, visited a few Alaska alpaca ranches, read information online and bought training books and tapes.

Eventually, I realized that breeding alpacas was an obscure niche in Alaska's livestock industry. After all my research, I was still attracted to the idea of a unique pet experience, but other Alaskans were captivated by an alternative lifestyle of breeding animals that could be sold for a small fortune.

Alpacas, originally from the mountainous regions of South America, are considered domestic livestock bred for their luxurious fiber, which is sometimes compared to cashmere and woven into fine sweaters and other garments. They were first imported to the United States in 1984.

During the mid-1980s, alpaca breeding was a small emerging industry in the 49th state. Alaska's first alpaca owners were three-term Alaska Sen. Jan Faiks and her husband Jim, who in 1978 became the second Alaskan to own llamas, which at 300-500 pounds are roughly twice the size of alpacas.

In 1984, the smaller, woolier, very cute alpacas were finally allowed to be imported to the United States.

"I fell in love with them," Jan said.

A year later, the Faiks traveled to New York and bought their first five alpacas at $15,000 each. (The price of some top-quality blue-ribbon studs can approach $100,000.) Before long, the herd at their Big Lake farm was up to 60 animals, a large breeding herd by Alaska standards.

In the late-1980s, as more Alaskans got into alpaca breeding, the Faiks helped form an association of Alaska alpaca owners and businesses. By the 1990s, some 36 farms or owners were on Jan's list. The organization Alpaca Lovers Actively Sharing Knowledge in Alaska (ALASKA) was affiliated with a big national organization, Alpaca Owners and Breeders Association (AOBA), a much-needed connection for those selling alpacas in the Lower 48.

Most of the original alpacas brought to Alaska had registered bloodlines with certificates registered with the federal Alpaca Registry Inc. The 2007 U.S. Department of Agriculture's census of agriculture recorded 20 farms and 196 alpacas in Alaska. By contrast, the 2012 census recorded only 10 farms with 114 alpacas.

Through the 1990s until about 2008, alpaca breeding operations spread from Fairbanks to Homer. At the peak, there were at least seven alpaca farms in the Mat-Su, two in Anchorage, one in Eagle River, three on the Kenai Peninsula, with others in the Delta and Fairbanks.

At that time, as the Faiks told the Peninsula Clarion in a May 2002 story, alpaca ranching was "a dandy business opportunity for Alaskans."

How dandy? The Faiks said they shipped 24 females to Oregon to be sold for $13,000 each. According to Jan, alpacas with good confirmation, fine fiber, desirable color and proven quality bloodlines could sell for up to $20,000 apiece.

The Faiks have retired from the alpaca breeding business but still have eight of the animals.

Good business while it lasted

Susie Dietz, an Anchorage emergency room doctor, was a latecomer to the business.

"I fell in love with alpacas after seeing an alpaca advertisement in the Alaska Airlines in-flight magazine," she confessed. She found them intriguing. Having bought a house with a barn, she decided she wanted alpacas. Those first animals led to breeding alpacas, and she built her herd to its peak of 54 animals in 2004.

As a breeder with good connections in the Lower 48, Dietz was able to ship out groups of 10 alpacas on Alaska Airlines, selling them at $20,000 per animal. In the end, she sold them all in 2006 at the height of the industry in Alaska, just ahead of a crash.

"I managed to break even," she said.  She donated two alpacas to the Alaska Zoo in Anchorage and kept two more.

One obstacle to greater success was the high price of quality breeding animals.

Not much has changed. Alaska alpacas are now selling for $500-$1,000 each. Some owners are reducing their herds by giving alpacas away.

The Alaska alpaca market was too far from the Lower 48. With the September 11 attacks in 2001 came increased costs of inspections and transportation. By the mid-2000s, flying alpacas out of Alaska became even more expensive when Alaska Airlines bought new planes and the alpaca shipping crates no longer fit.

Alpacas could not be trucked out of Alaska through Canada because of fear alpacas might carry brucellosis that could infect domestic animals. Hay costs were rising, too.

At the same time, bringing judges to alpaca shows at the Alaska State Fair became too expensive. And the cost of taking alpacas to the Lower 48 to compete in national shows was prohibitive, too. Alpaca shows allow breeders to have their animals judged in a performance event displaying how well the handler and alpaca work together. Production shows compare breeding genetics and alpaca conformation to correct body structure. Fleece shows judge fiber quality.

With no low-cost way to take alpacas to big shows down south, Alaska alpacas couldn't compete with blue-ribbon champions.

Alpacas have to be sheared annually, usually mid-May to early June, to harvest fiber that cleaned and spun can sell for $5 per ounce. When knitted or felted into sweaters, scarves, or hats the fiber is even more valuable. Beautiful, handcrafted alpaca fiber wearables are now the new "alpaca gold."

In the 1980s, a shearer was brought to Alaska in late May to visit all the alpaca farms around the state. But a professional Outside shearer became too expensive, too. Alpaca owners had to either hire someone who knew how to shear sheep or learn themselves.

On the lower Kenai Peninsula, alpaca owners shared in the cost of buying the shears, and Greg Simpson of Anchor River Llama and Alpaca Ranch became the local shearer.

As the market declined, some Alaskan alpaca owners began aging out of alpaca farming and selling off their herds. Then the Lower 48 recession struck.

"We managed to break even with our alpaca operation, but it has been difficult with the economic downturn," explained Kathy Simpson, co-owner with husband Greg of the Anchor River ranch. "We are selling most of our alpacas and will only keep a few of our favorites."

Today's alpaca business has transformed into a small cottage fiber industry and a unique pet experience, with herds ranging from two to 17 animals in Fairbanks, the Delta, the Valley, Anchorage, Sterling, Kenai and Homer. Roughly 100 alpacas remain in Alaska.

Alpaca fiber is highly valued because it does not contain lanolin, making it hypoallergenic. It is very soft, warmer than sheep wool, and water resistant.  Fiber guilds around the state seek natural fibers for artisan crafts.

Many of today's small alpaca herd owners double as fiber artists. Marilyn Methven, artist at Marilyn's Fiber Art in Wasilla, recently acquired five alpacas. She specializes in nuno felting, a technique bonding loose fiber into a sheer fabric like silk to create lightweight felt. Nuno means cloth in Japanese. She plans to use softer alpaca fiber in nuno-felted scarves and shawls as well as other creations.

The Alaska Natural Fiber Business Association works to help fiber artists bring their creations to market by "strengthening Alaska's natural fiber industry, economy, and marketplace." One of the biggest needs for this growing niche is fiber processing, according to the association.

Most Alaska alpaca breeders said that the money was in the animal, not the fiber. Shipping and fiber-processing costs in the Lower 48 were prohibitive for most Alaskan alpaca owners. And most mills declined small orders. The result: A lot of alpaca fiber was wasted or used for insulation.

"During the Exxon Valdez oil spill, we gave all our alpaca fiber to create booms to soak up the oil," Kathy Simpson recalled. "It just was not worthwhile economically to get it processed."

Some 30 years later, Alaska still has limited options for processing natural fiber. In North Pole, Arctic Qiviut processes only qiviut fiber from musk oxen. They do buy some natural fibers like alpaca to make special blends with the qiviut.

Becky Oviatt, owner of The Frayed Knot in Palmer, has the only small-batch natural fiber processing facility in Alaska. In her little processing center she'll wash, dry, pick, card, comb and even spin the fiber.

"I process all fibers, including alpaca," she said. "My prices are competitive despite the hand processing. Small-batch processing, one fleece at a time, is my specialty."

This October in Fairbanks, Coyote Trail Farm and Fiber Mill, owned by Kate Wattum, will receive a new full-service Belfast Mini Mill from Prince Edward Island, Canada. It will include a de-hairer that removes guard hairs, separating the courser fiber from the softer desirable fiber, a critical part of the process to produce a high-quality local product.

Wattum, who is retiring from her public relations job with the University of Alaska, plans to have the mill running by January.

"The mill will be housed in a 30-by-60-foot building along with a felting area, looms and knitting machine," Wattum explained. "And the mill will be able to process just about any fiber, including plant fibers."

Wattum plans to visit fiber guild gatherings around the state to introduce herself and her mill. With such new options to process fiber in Alaska, the fledgling alpaca niche market has the potential to become a valuable cottage industry.

Back to my story about falling in love with alpacas. In 2003, I was one of those seeking alpacas as pets, and I found my initial pair at Susie Dietz's Anchorage ranch. Alpacas are herd animals, so I knew I needed at least two.

Keeping alpacas safe from bears, coyotes, wolves and roving dogs at our rural Homer home requires a safe enclosure. My husband, Ed Bailey, and I contracted a fencing company to enclose roughly a half-acre with 10-foot predator-proof fencing from New Zealand.

We then installed three strands of electric wire on the outside.

Alpacas generally are very clean animals, especially males. Since alpacas tend to defecate in a specific area, cleanup is fairly easy. Mine do not do their business in the barn. Gelded males make the best pets, and are much mellower than intact males.

Alpacas are playful and love pronking, or racing forward in leaps and bounds.  Spats can spark a round of neck wrestling, and yes, spitting. Sometimes they spit just air and a bit of saliva. But more likely, if it is a serious spat, they spew slimy, green, foul-smelling acidic stomach material. Don't annoy an alpaca or you just might get a face full. For the most part, though, alpacas are content to eat grass and chew their cud all summer.

As a prey species, alpacas tend to be very shy and skittish. Generally, they do not like to be touched or handled, so positive training methods appealed most to me.  I selected an approach to handling alpacas that emphasizes understanding behavior, safety and building trust. At a Homer horse-training clinic I learned about clicker training, a method that marks the desired behavior of an animal with a "click" and rewards the animal, usually with a treat.

Using the two training approaches, I worked daily with my alpacas, Gypsy and Canela. Even though other alpaca owners laughed at me, I patiently taught them to let me cut their toenails, halter them, work safely and easily with the vet, take them for walks and play agility games. I was determined that my two new friends would have enough daily enrichment that they would not become neurotic, like many captive animals.

Alpacas love to learn. I have watched the expression of "I've got it now!" light up their faces when they finally understood what I was trying to teach, the result of trust between trainer and animal. They'll even let me scratch their necks and backs.

Gypsy and Canela are happy, engaged, enjoyable companions that have given back to me. They have taught me patience and how to be a good trainer, but also how to relax and enjoy life on alpaca time.