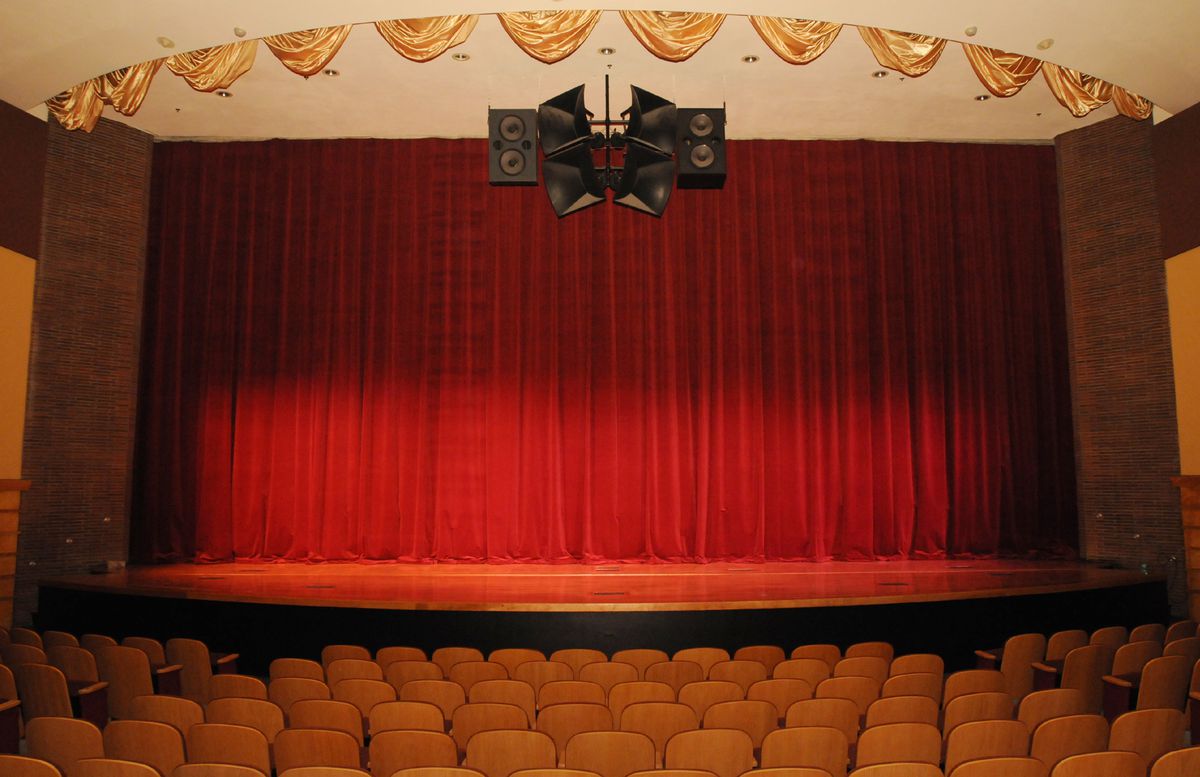 With new barn door curtains in place and an olio curtain tucked into the ceiling ready for deployment, the renovated auditorium is almost ready for use Wednesday January 16, 2008 at West High School. (Erik Hill / ADN archive 2008)

With new barn door curtains in place and an olio curtain tucked into the ceiling ready for deployment, the renovated auditorium is almost ready for use Wednesday January 16, 2008 at West High School. (Erik Hill / ADN archive 2008)

They say there's a lady in white who haunts the old auditorium of Anchorage's West High School, on the south bluff overlooking Westchester Lagoon. She's been spotted off and on for decades -- sometimes standing mute among darkened seats in the cavernous and echoing space, sometimes fleeing through corridors, sometimes lurking backstage or in the fluorescent-lit basement halls.

"I've never, ever seen a ghost in there -- I can't say I even believe in ghosts," West theater teacher David Block told a group of his students last week. "I haven't ever seen her, but enough people have seen her that I have to believe that something is going on."

As the teenagers in Block's stage production class listened in awed silence, Block told them that the sightings have a remarkable consistency -- always a female, elusive, wearing white clothes. A variety of people -- school officials, students, visitors -- have contributed to the unsettling reports. Some witnesses claim they have never heard of any kind of West High ghost in advance of their own weird encounters.

Another West haunting might include a former janitor, long deceased, who has been seen persistently sweeping the lobby when no one should be present, Block said. There have also been reports of footsteps tip-tapping around the corner of empty halls, slamming doors, lights switching on and off. All signs that one might not be as alone as one thinks, especially when the hour is particularly late.

But it's the unknown lady who returns most frequently.

A few years ago, a student stage manager saw a girl open an off-limits backstage door during a dress rehearsal and jumped up in exasperation. When he opened the door into an alcove to confront her for violating the rules, no one was there.

Two assistant principals and a security guard were rattled when something in white flashed by them in the strange, narrow corridor behind the balcony.

"To this day, one of those assistant principals will not talk about what happened -- refuses to discuss it," Block said. "Even I don't like going into the passage behind the balcony."

A girl in the class raised her hand. When entering the supposedly empty theater last year with a group, she spied a young woman wearing white clothes standing above them in the balcony, looking down. When she asked her friend -- "Do you see her?" -- the figure vanished.

Did you know about this ghost before today? Block asked.

She shook her head.

Another story: Down in "Hell" -- a basement vault formerly used as the school's rifle range and now filled with costumes and props -- a girl helping with a show opened a door into a tiny side room and was shocked to see a strange man glaring at her. She screamed. Yet when others investigated, no one was there. Or so the story goes.

"I'm dropping out of your class," one boy told Block.

The students then followed Block across the courtyard and entered the theater lobby. He unlocked the door and let them in. The empty seats and rows were well lit --not creepy at all -- with partly completed sets waiting on the stage. (The school's production of the musical "Legally Blonde" opens this week.)

Who wants to check out the balcony corridor? Block asked.

Half the students raised their hands, and the other half shrieked "No!" But when the volunteers dashed to the back of the theater, yelling and laughing, the rest joined.

And so they all went: Through a narrow door. Up 23 steep steps. Around a corner -- and there it was. The haunted corridor. White walls and sinister green carpet curved relentlessly to the right. With no end in sight, no obvious exit at all, it felt … buried.

Block told them he's been alone in the theater, sometimes at night, and heard footsteps up here.

"On many occasions, I've called out, 'Hello!'" But no one is ever there.

The class walked slowly down the carpeted passageway, finally exiting onto the balcony. Nothing strange happened, but the kids seemed relieved to be out in auditorium again.

"That stairway is sketchy," one boy said.

"Everything is sketchy," Block replied.

Editor's Note: This story was originally published in Alaska Dispatch for Halloween 2012.