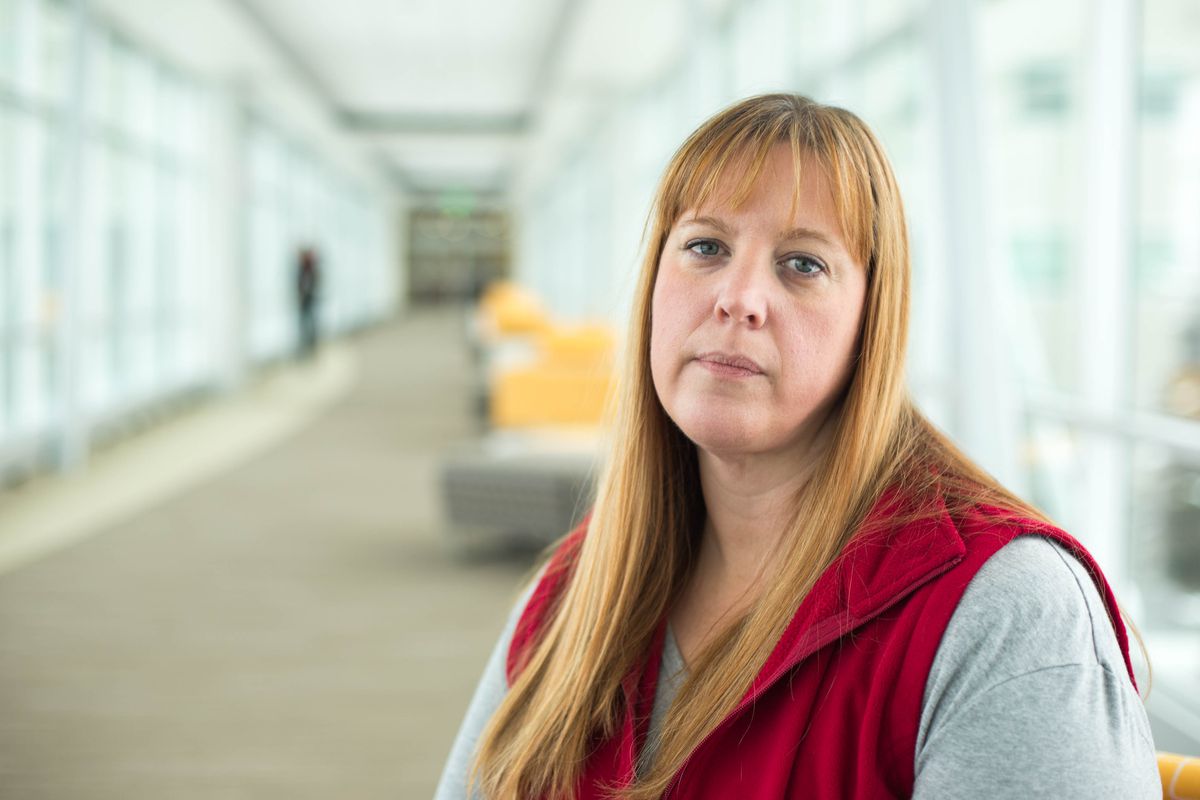 Marcy Merrill, a nursing student at UAA, traveled out of state multiple times for medical procedures, saving tens of thousands of dollars in the process. Photographed at UAA on Tuesday, November 3, 2015.

Marcy Merrill, a nursing student at UAA, traveled out of state multiple times for medical procedures, saving tens of thousands of dollars in the process. Photographed at UAA on Tuesday, November 3, 2015.

In 2007, Marcy Merrill decided it was finally time to get some help. She was obese, but wouldn't truly admit it.

Then one day, "I looked up and saw myself in the mirror … really saw myself," Merrill said. At that moment, she knew she needed a medical intervention.

Merrill, who was living in Nome at the time, began researching the costs of lap band bariatric surgery, a procedure that causes weight loss by restricting the amount of food a person's stomach can hold.

Her insurance didn't cover the procedure, so she was looking to finance the surgery on her own. Anchorage doctors told her that she'd need to fly there multiple times before the procedure. With the travels, the required counseling, the anesthesiologist and surgery, the entire procedure would cost her about $24,000, she said.

When she realized the expense, "I was actually thinking that I would just save that and be unhealthy," Merrill said. "I was not going to take money away from my family (for something) that was not an emergency."

A friend was the first to tell her about an alternative -- physicians in Mexico who offered "all-inclusive" bariatric surgery for $10,000. It looked promising until she found a doctor in Colorado who matched the price.

Merrill didn't want to leave Alaska for the surgery. "You worry about things when you fly," she said; some health complications can be exacerbated by air travel. But despite her trepidations, she traveled to Colorado, stayed with friends during the outpatient procedure and spent less than half what she would have if she'd stayed in Alaska.

Alaskans have been partaking in medical travel, or "medical tourism," as it's sometimes called, for years. The state government, which is self-insured, has had a travel program for its employees and retirees since 2006; in the first six months of this year alone nearly 200 trips out of state were reimbursed by the state.

Alaska's high costs for health care are well-known; a 2011 study for the Alaska Health Care Commission highlighted the differences between Alaska and five Western states (Washington, Oregon, Idaho, Wyoming and North Dakota). Alaska consistently came out at the top of the pack, with costs averaging 59 percent higher than the rest, the study authors write.

In some cases, procedures were more than three times as expensive -- the average cost in Alaska for a surgeon to insert an intracoronary stent was $4,866.68, compared to Washington, where the same procedure was $1,331.22.

Rolled out this year, Premera's medical travel program started both as a reaction to high costs of care and as a way to provide more access to health care, especially for rural residents, spokesperson Melanie Coon wrote.

The company started a trial run of its medical travel program in 2013, and in January expanded the program to all of its members in Alaska. There are 17 procedures covered, including hip replacement, shoulder arthroscopy, knee replacement and bariatric surgery.

About 25 people have flown out of state for surgeries this year so far, Coon said.

The approved procedures have a lower risk for complications, Coon said, and were also based on cost differences between states. Knee and hip surgeries are among the most popular procedures. For both Premera and the state, Seattle is the most common destination.

GCI also introduced its program in 2013 and has seen steady growth since then, with 10 people leaving Alaska for care so far this year. GCI uses Bridgehealth Medical, a company solely dedicated to negotiating lower rates for procedures to find savings, according to vice president of human resources Joe Wahl.

The cost difference is startling. For one surgery in late October (a cerebral angiogram with embolization and surgical resection of arteriovenous malformation) Bridgehealth's estimate of an Alaska surgery versus one at St. John's Hospital & Medical Center in Arizona showed savings of more than $200,000, Wahl wrote.

Unlike Premera's plan, there is no specific list of procedures, but general areas are orthopedic, nonemergency heart conditions and planned major surgeries. In May, the company opened up the program to cancer surgeries as well.

For many Alaskans, these kinds of procedures just aren't available locally. A few of Premera's medical travel patients have flown to Anchorage for their procedures. The same goes for the state of Alaska, which reimbursed around 160 in-state flights for medical procedures during the first six months of the year.

"Of course, none of us want Alaskans leaving the state for health care," Taylor said, both for economic and clinical reasons.

When Alaskans leave for health care, that impacts what medical procedures are offered over the long term. "We don't want to be a city that has a check-out service for health care," she said.

Costs are higher, she said, partially due to a greater overhead that Alaska providers face. Some of the overhead is about supporting the Alaska economy, Taylor said. For example, Alaska Regional purchases blood from the Blood Bank of Alaska, although blood purchased from the Lower 48 is cheaper.

Clinically, there's a danger, too. The possibility of complications from a surgical procedure become more dangerous from afar, Taylor said. "That is a big deal ... if you have something happen and you need follow-up care and you're thousands of miles away."

Patients can also negotiate the pay -- and in some cases get "aggressive" discounts. That's an option that Alaskans don't always realize they have, Taylor said. "Ask that question before you give up" and fly out of state, she said.

For Merrill, the benefits outweighed the potential issues. "We would love to help out local businesses … but don't triple the price," Merrill said.

Three years after her bariatric surgery, more procedures presented themselves. Merrill's weight had stabilized and she was told she needed to have some of her excess skin removed.

In one procedure alone -- a tummy tuck -- Merrill saved more than $15,000 by flying to a plastic surgeon in Seattle, she said.

Merrill lives in Anchorage now and is studying to be a registered nurse. She believes that many people delay or avoid health care procedures due to cost and they "just don't know that you can go somewhere else ... it's sad," Merrill said. "And we just have sicker people and it just drives up health care costs."

Taylor agreed that high costs sometimes prevent timely care. "We're all in this together," she said. "I am committed to getting the cost of health care down."