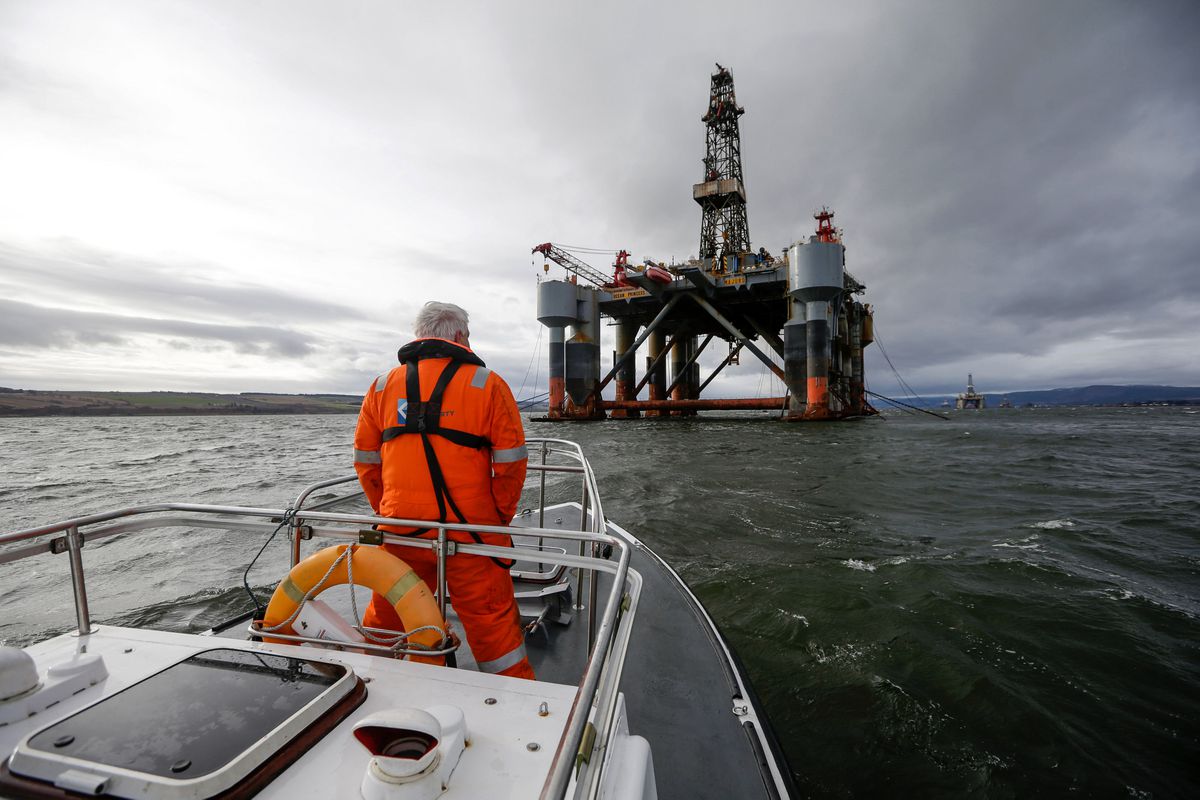 An employee stands on the deck of a pilot boat in view of the Ocean Princess oil platform, operated by Diamond Offshore Drilling Inc., in the Port of Cromarty Firth in Cromarty, Scotland, on Feb. 16, 2016. (Matthew Lloyd / Bloomberg)

An employee stands on the deck of a pilot boat in view of the Ocean Princess oil platform, operated by Diamond Offshore Drilling Inc., in the Port of Cromarty Firth in Cromarty, Scotland, on Feb. 16, 2016. (Matthew Lloyd / Bloomberg)

Explorers in 2015 discovered only about a tenth as much oil as they have annually on average since 1960. This year, they'll probably find even less, spurring new fears about their ability to meet future demand.

With oil prices down by more than half since the price collapse two years ago, drillers have cut their exploration budgets to the bone. The result: Just 2.7 billion barrels of new supply was discovered in 2015, the smallest amount since 1947, according to figures from Edinburgh-based consulting firm Wood Mackenzie. This year, drillers found just 736 million barrels of conventional crude as of the end of last month.

That's a concern for the industry at a time when the U.S. Energy Information Administration estimates that global oil demand will grow from 94.8 million barrels a day this year to 105.3 million barrels in 2026. While the U.S. shale boom could potentially make up the difference, prices locked in below $50 a barrel have undercut any substantial growth there.

New discoveries from conventional drilling, meanwhile, are "at rock bottom," said Nils-Henrik Bjurstroem, a senior project manager at Oslo-based consultants Rystad Energy. "There will definitely be a strong impact on oil and gas supply, and especially oil."

Global inventories have been buoyed by full-throttle output from Russia and OPEC, which have flooded the world with oil despite depressed prices as they defend market share. But years of under-investment will be felt as soon as 2025, Bjurstroem said. Producers will replace little more than one in 20 of the barrels consumed this year, he said.

Global spending on exploration, from seismic studies to actual drilling, has been cut to $40 billion this year from about $100 billion in 2014, said Andrew Latham, Wood Mackenzie's vice president for global exploration. Moving ahead, spending is likely to remain at the same level through 2018, he said.

Exploration is easier to scratch than development investments because of shorter supplier-contract commitments. This year, it will make up about 13 percent of the industry's spending, down from as much as 18 percent historically, Latham said.

The result is less drilling, even as the market downturn has driven down the cost of operations. There were 209 wells drilled through August this year, down from 680 in 2015 and 1,167 in 2014, according to Wood Mackenzie. That compares with an annual average of 1,500 in data going back to 1960.

Ten years down the line, when the low exploration data being seen now begins to hinder production, it will have a "significant potential to push oil prices up," Bjurstroem said.

"Exploration activity is among the easiest things to regulate, to take up and down," Statoil Chief Executive Officer Eldar Saetre said Monday in an interview at the ONS Conference in Stavanger, Norway. "It's not necessarily the right way to think. We need to keep a long-term perspective and maintain exploration activity through downturns as well, and Statoil has."

The Norwegian company will drill "a significant number" of wells in the Barents Sea over the next two to three years, exploration head Tim Dodson said Tuesday at the same conference. Given current levels of investment across the industry and decline rates at existing fields, a "significant" supply gap may open up by 2040, he said.

[If feds hold a Cook Inlet lease sale, will anyone come?]

Oil prices at about $50 a barrel remain at less than half their 2014 peak, as a glut caused by the U.S. shale boom sent prices crashing. When the Organization of Petroleum Exporting Countries decided to continue pumping without limits in a Saudi-led strategy designed to increase its share of the market, U.S. production retreated to a two-year low.

Kristin Faeroevik, managing director for the Norwegian unit of Lundin Petroleum AB, a Stockholm-based driller that's active in Norway, said it will take "five to eight years probably before we see the impact" on production from the current cutbacks. In the meantime, he said, "that creates opportunities for some."

Oil companies will need to invest about $1 trillion a year to continue to meet demand, said Ben Van Beurden, the CEO of Royal Dutch Shell, during a panel discussion at the Norway meeting. He sees demand rising by 1 million to 1.5 million barrels a day, with about 5 percent of supply lost to natural declines every year.

Persistently low prices mean that even when explorers invest in finding new resources, they are taking less risk, Bjurstroem said. They are focusing on appraisal wells on already-discovered fields and less on frontier areas such as the Arctic, where drilling and developing any discovery is more expensive. Shell and Statoil, among the world's biggest oil companies, abandoned exploration in Alaska last year.

"Traditionally, it's the big companies that have had the means to gamble, and they might be the ones that have cut the most," Bjurstroem said.

Overall, the proportion of new oil that the industry has added to offset the amount it pumps has dropped from 30 percent in 2013 to a reserve-replacement ratio of just 6 percent this year in terms of conventional resources, which excludes shale oil and gas, Bjurstroem predicted. Exxon Mobil said in February that it failed to replace at least 100 percent of its production by adding resources with new finds or acquisitions for the first time in 22 years.

"That's a scary thing because, seriously, there is no exploration going on today," Per Wullf, CEO of offshore drilling company Seadrill, said by phone.