Robots could replace 1.7 million American truckers in the next decade 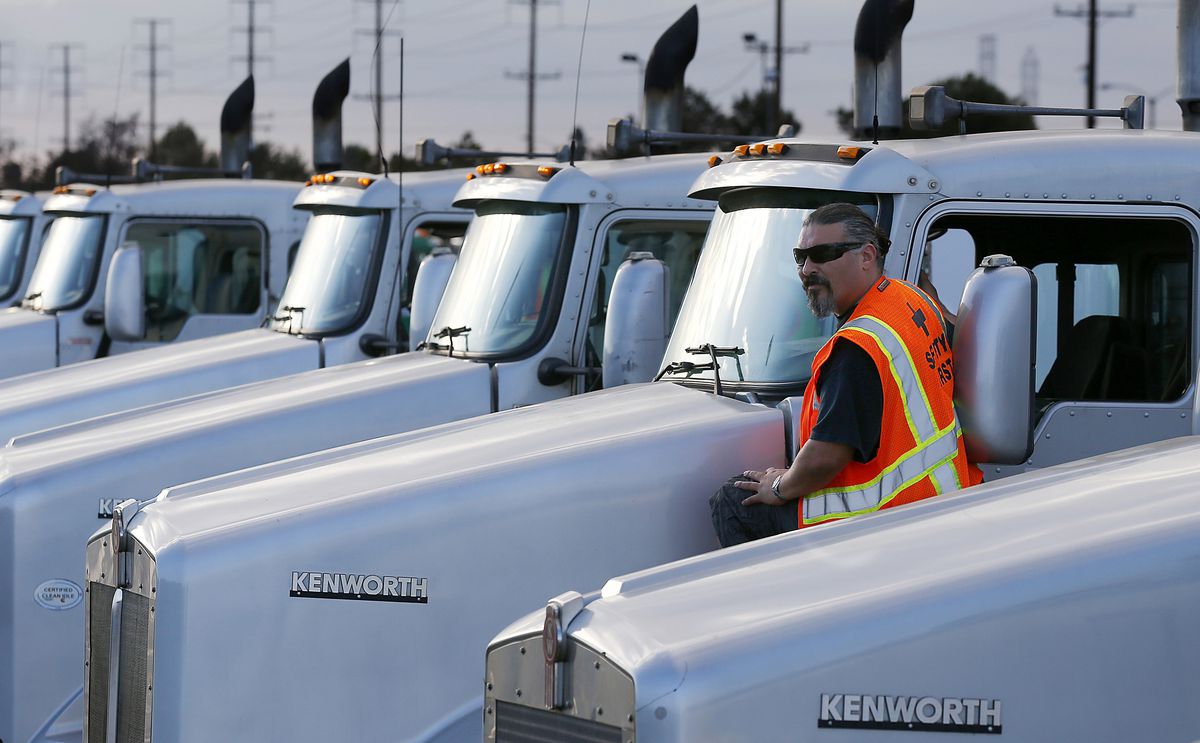 Scott Spendola has made a good living driving cargo around the ports of Long Beach and Los Angeles in California, and says the advent of automated trucking would eliminate many good-paying jobs for blue-collar workers at the harbor. (Luis Sinco / Los Angeles Times / TNS)

Scott Spendola has made a good living driving cargo around the ports of Long Beach and Los Angeles in California, and says the advent of automated trucking would eliminate many good-paying jobs for blue-collar workers at the harbor. (Luis Sinco / Los Angeles Times / TNS)

LOS ANGELES — Trucking paid for Scott Spindola to take a road trip down the coast of Spain, climb halfway up Machu Picchu, and sample a Costa Rican beach for two weeks. The 44-year-old Los Angeles-area resident makes up to $70,000 a year, with overtime, hauling goods from the Port of Long Beach. He has full medical coverage and plans to drive until he retires.

But in a decade, his big rig may not have any need for him.

Carmaking giants and ride-sharing upstarts racing to put autonomous vehicles on the road are dead set on replacing drivers, including truckers. Trucks without human hands at the wheel could be on U.S. roads within a decade, analysts and industry executives say.

At risk is one of the most common jobs in many states, and one of the last remaining careers that offer middle-class pay to those without a college degree. There are 1.7 million truckers in the U.S., and another 1.7 million drivers of taxis, buses and delivery vehicles. That compares with 4.1 million construction workers.

While factory jobs have gushed out of the country over the last decade, trucking has grown and pay has risen. Truckers make $42,500 a year on average, putting them firmly in the middle class.

On Sept. 20, the Obama administration put its weight behind automated driving, for the first time releasing federal guidelines for the systems. About a dozen states already have created laws that allow for the testing of self-driving vehicles. But the federal government, through the National Highway Traffic Safety Administration, will ultimately have to set rules to safely accommodate 80,000-pound autonomous trucks on U.S. highways.

In doing so, the feds have placed a bet that driverless cars and trucks will save lives. But autonomous big rigs, taxis and Ubers also promise to lower the cost of travel and transporting goods.

It would also be the first time that machines take direct aim at an entire class of blue-collar work in America. Other workers — such as gardeners, home builders and trash collectors — could be next.

"We are going to see a wave and an acceleration in automation, and it will affect job markets," said Jerry Kaplan, a Stanford lecturer and the author of "Humans Need Not Apply" and "Artificial Intelligence: What Everyone Needs to Know," which chronicle the effect of robotics on labor.

"Long-haul truck driving is a great example, where there isn't much judgment involved and it's a fairly controlled environment," Kaplan said.

"Automation tends to replace low-wage jobs with high-wage jobs," said James Bessen, a lecturer at the Boston University School of Law who researches the effect of innovation on labor. "The people whose skills become obsolete are low-wage workers, and to the extent that it's difficult for them to acquire new skills, it affects inequality."

Trucking will probably be the first type of driving to be fully automated — meaning there will be no one at the wheel. One reason is that long-haul big rigs spend most of their time on highways, which are the easiest roads to navigate without human intervention.

But there's also a sweeter financial incentive for automating trucks. Trucking is a $700 billion industry, in which a third of costs are spent on compensating drivers.

"If you can get rid of the drivers, those people are out of jobs, but the cost of moving all those goods goes down significantly," Kaplan said.

The companies pioneering these new technologies have tried to sell cost savings as something that will be good for trucking employers and workers.

Otto, a self-driving truck company started by former Google engineers and executives, pitches its system as a source of new income for drivers who will be able to spend more time in vehicles that can drive solo as they rest.

The startup retrofits trucks with kits allowing them to navigate freeways without a driver holding the wheel. For the last several months, at least one Volvo truck has been test-driving the system, with a person at the wheel, on Interstate 280 or on the 101 Freeway in California.

The system works through a set of motion sensors; cameras; lidar, which uses laser light; and computer software to make driving decisions.

Lior Ron, Otto's co-founder, says that as the system gathers data on tens of thousands of miles of U.S. highways, having the driver asleep in the back could become a possibility within the next few years. That would double the amount of time a truck could spend on the road each day, allowing freight companies to charge more for shorter delivery times, Ron said. "The truck can now move 24/7."

The question of whether to pay drivers for hours spent sleeping in a truck while it drives for them has "been an ongoing debate in the trucking industry," he said.

Otto says its system may eventually allow some big rigs to traverse highways without a driver at all. In that scenario, a driver would steer the big rigs to and from "pickup and drop-off locations," playing a role "similar to a tug boat," but trucks could drive without any human present during the longest stretches of the journey, Ron said.

Several states are already laying the groundwork for a future with fewer truckers. In September, the Michigan state Senate approved a law allowing trucks to drive autonomously in "platoons," in which two or more big rigs drive together and synchronize their movements. That bill follows laws in California, Florida and Utah that set regulations for testing truck platoons.

Wirelessly connected trucks made their European debut in April, when trucks from six major carmakers successfully drove in platoons through Sweden, Germany, Belgium and the Netherlands.

Those convoys will be on American roads within a year, says Josh Switkes, chief executive of Silicon Valley-based Peloton, whose software links two semi-trailer trucks. Peloton's investors include UPS and Volvo Group. The company has begun taking reservations for its system from freight fleets, and it plans to start delivering them "in volume" within a year.

The system works by transmitting specific data from the first truck to the second so they operate in tandem, almost as if they were a train on the open road. When the lead truck brakes, the following vehicle receives a signal telling it how much to apply its brake.

That communication can make it safe for the trucks to drive as close as 30 feet from one another, the company says. If a car cuts in between the two, the rear truck can automatically slow down, assume a safe following distance, and then return to its previous arrangement with the leader after the car changes lanes, Switkes said.

Reduced drag on the first and second vehicles can produce massive fuel savings. For the time being, drivers are installed in both trucks, with their feet off the pedals and their hands on the wheel.

Peloton says its technology reduces fuel expenses by 7 percent and could save companies even more on salaries.

"As we move to higher levels of automation, we can save them massive amounts in labor" costs, Switkes said. Peloton could make the rear truck in the convoy fully machine-driven, without any humans present, within a decade, he added.

But even before that happens, platooning could segregate drivers into different pay classes depending on whether they're driving the first or second rig.

"Maybe you pay the front driver more because they have a more important job," Switkes said. Eventually, as the system makes trucks more efficient, "you may be paying fewer drivers overall."

Like most companies trying to turn trucks into robots, Peloton sees itself being useful mainly on highways, which are more predictable and less people-filled than city streets. Still, the company announced in July that it will develop and help deploy technology to power a fleet of heavy-duty trucks to serve the San Diego port.

Spindola, the truck driver, perched atop a creaky seat as his big rig sat inside the Long Beach port waiting to be OK'd for a departure to a nearby storage yard, said he isn't convinced that a machine could ever do his job.

"You need a human being to deal with some of the problems we have out on the road," Spindola said. There are too many delicate maneuvers involved, he maintained, too many tricks and turns and unforeseen circumstances to hand the wheel over to a robot.

He had just spent about 20 minutes weaving in and out of corridors of 40-foot shipping containers at the port to attach a chassis to his rig and drive it toward a large forklift. There the lift operator slotted a container onto the bay of his truck.

"This is a good job as far as pay, one of the last good jobs," Spindola said. "Maybe I just don't want to accept that the future is here."