Houses of worship align to offer safe haven to immigrants 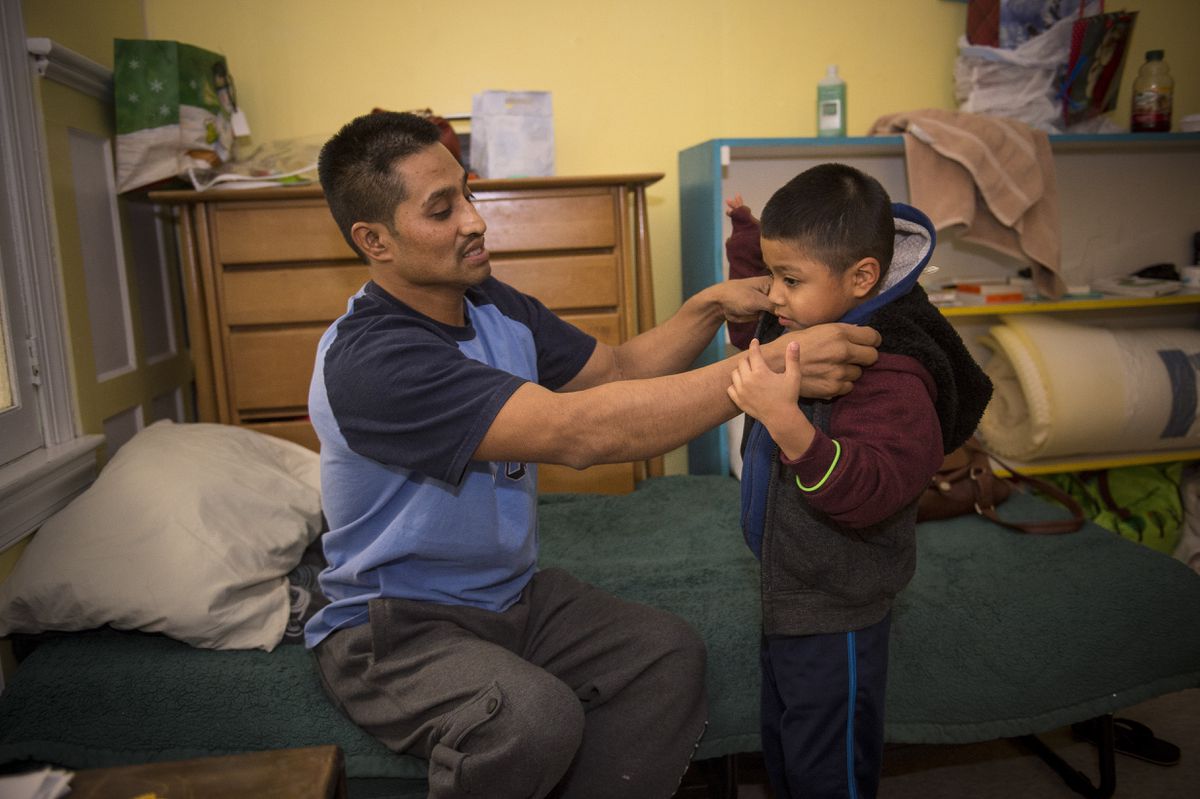 Javier Flores Garcia, who entered the U.S. illegally from Mexico, helps his son Javier Jr., 5, put on a jacket in the basement room they share at the Arch Street United Methodist Church, in downtown Philadelphia on Dec. 16. (Charles Mostoller/The New York Times)

Javier Flores Garcia, who entered the U.S. illegally from Mexico, helps his son Javier Jr., 5, put on a jacket in the basement room they share at the Arch Street United Methodist Church, in downtown Philadelphia on Dec. 16. (Charles Mostoller/The New York Times)

PHILADELPHIA — Tucked one floor below the majestic Gothic sanctuary of Arch Street United Methodist Church, Javier Flores Garcia sleeps on a cot in a basement Sunday-school classroom that church members have outfitted with a microwave, a compact refrigerator and a television.

Flores, an arborist, longs for the open air, but does not dare set foot outside. He was supposed to report to the immigration authorities last month to be deported to his homeland, Mexico, but one day before his report date, he took refuge in the church.

His family is why he is fighting to remain, and when they visited him in the church recently, his 5-year-old son, Javier Jr., parked on his lap. The boy often refuses to leave his father's side, and has ended up staying for days with him in the church. On Christmas Day, Flores had been there six weeks.

This downtown church is one of 450 houses of worship in the United States that have offered to provide sanctuary or other assistance to undocumented immigrants, according to leaders of the Sanctuary Movement. (Few congregations have the space and fortitude to risk harboring immigrants indefinitely, so others are lining up to contribute money, legal aid, food, child care or transportation.) The congregations joining this network have more than doubled since the election of Donald Trump — a rapid rebuttal to Trump's postelection promise to deport 2 million to 3 million unauthorized immigrants who he said have been convicted of crimes.

Protecting immigrants is shaping up to be a priority of the religious left, an amorphous collection of people and groups reflecting many faiths and ethnicities. It has been jolted into action by Trump's victory and his selection of an attorney general nominee who supports a crackdown on immigrants.

"Jesus said we are to provide hospitality to the stranger," said the Rev. Robin Hynicka, Arch Street's pastor, citing Matthew 25, in which Jesus instructs his followers to feed, house and clothe "the least of these," the poor and vulnerable.

"That's exactly what we were asked by Javier, to provide sanctuary. And of course, we said yes," he added.

Hynicka spoke in his chilly upstairs office at the church, which has 375 members. The heat worked better in the basement fellowship hall, where up to 30 homeless people take shelter on winter nights. This church is accustomed to mobilizing for social causes, from gay marriage to fights against casino gambling and for an increase in the minimum wage. Five years ago, the church joined the New Sanctuary Movement of Philadelphia, but Flores is the first person the church has taken in.

On this night, his children excitedly brought Flores stray pieces of candy that volunteers were stuffing into piñatas for a party later. Flores and his longtime partner, Alma Lopez, have two children: Javier Jr. and Yael, 2. He has also been a father to Lopez's daughter, Adamaris, 12, since she was abandoned as an infant by her birth father. All were born in the United States. The family's home is two bus rides away from the church.

Lopez, sucking on a lollipop, said having the family return to Mexico is not a solution: "We want a better future for our children. The situation in Mexico is very bad. There's no work, no good school. Here, we have a future."

Federal immigration authorities say Flores has a long history of violations: He was apprehended nine times between 1997 and 2002 trying to cross the border. He re-entered and was ordered removed by a judge in 2007. He re-entered twice in 2014 and served prison sentences for illegal re-entry, a criminal felony conviction.

Last year his children saw him taken away by the authorities, and it took a toll. While Flores was in detention this year, Adamaris attempted suicide in April, drinking a bottle of rubbing alcohol. She was hospitalized for nine days. Immigration officials released Flores for 90 days to prepare his family for deportation.

Sanctuary was his last hope.

"My only crime is coming back," said Flores, who wears a government-issued ankle bracelet.

During the Vietnam War, American churches offered sanctuary to soldiers who refused to serve. And in the 1980s, congregations opened their doors to Central Americans fleeing wars in El Salvador, Guatemala and Honduras.

The movement was revived in 2006 and grew during President Barack Obama's two terms, said the Rev. Alexia Salvatierra, a pastor in the Evangelical Lutheran Church in America. At least 2.5 million people were deported during Obama's time in office, earning him the nickname "deporter in chief."

One big change from the 1980s, Salvatierra said, is that now, thousands of Latino churches and their clergies are also involved in protecting immigrants — frequently their own members and often quietly. In the '80s, mostly white, Protestant churches led the way.

"We're in a different universe now. We don't need the white people to rescue us, thank you very much. We need to be in partnership," she said in an interview, before heading off to train sanctuary workers at a multiethnic church in downtown Los Angeles. She expected 25 people, but 150 signed up.

But some see sanctuary as misguided, or naive. Jessica Vaughan, director of policy studies at the Center for Immigration Studies, which supports tighter controls on immigration, said she understood that churches had sympathy for people facing deportation. "But I find myself wishing that they had as much sympathy for other parishioners they have who are adversely affected by illegal immigration" because of jobs, higher taxes or crime.

Churches, schools and hospitals are considered "sensitive locations," according to Immigration and Customs Enforcement. Immigration officers are supposed to avoid those locations, unless they have advance approval from a supervisor or face "exigent circumstances" that require immediate action, said Jennifer Elzea, an agency spokeswoman.

Religious leaders are preparing for the possibility that this could change under Trump. Auburn Seminary in New York City, which trains religious leaders on the left, convened a postelection "Long Game Faith Summit" this month, and invited the Rev. Alison Harrington from Tucson, Arizona, to give workshops on sanctuary.

Sanctuary workers in the '80s organized a sort of "underground railroad" to move immigrants from dangerous regions to safer ones, and that may have to be reactivated, she told her workshop.

In considering whether to offer sanctuary, congregations look for immigrants with viable cases and sympathetic stories. Flores was the victim of a knife attack outside Philadelphia in 2004 and gave the police testimony that resulted in the attackers' arrests. He has applied for a U Visa, given to crime victims, said his lawyer, Brennan Gian-Grasso.

In Denver this month, the Mountain View Friends Meeting, a Quaker church, took in a woman from Peru who worked for years in a nursing home using fake papers, pleaded to a felony, paid $12,000 in back taxes and served four years on probation, said Jennifer Piper, interfaith organizer with the American Friends Service Committee and coordinator for the Metro Denver Sanctuary Coalition. The Peruvian woman has two children, ages 8 and 1, who are both Americans.

There are about 11 people in sanctuary in churches in New York now, said the Rev. Donna Schaper, senior minister of Judson Memorial Church, which is sheltering one of them. These immigrants did not commit violent crimes, she said, and many, like the woman in Denver, paid their penalties and now face double jeopardy. Schaper said that these are hardly the Mexican "rapists" whom Trump has said he will deport.

"We are talking mostly about white-collar crime. Faking credit cards. Faking IDs. Many of these people are quite middle class and well educated," she said, and they are not only Latinos, but also Chinese, Russians, Pakistanis and many others.

For some churches, the immigrants at risk are their own parishioners. Robert W. McElroy, Roman Catholic bishop of San Diego, recently told a Catholic immigration conference, "It is unthinkable that we will stand by while more than 10 percent of our flock is ripped from our midst and deported."

The Episcopal Diocese of Los Angeles recently declared itself a "sanctuary diocese" and called for "holy resistance" to Trump's immigration plans. The California-Pacific Conference of the United Methodist Church also proclaimed support for sanctuary efforts.

And when its rabbis convene in February, the Jewish group T'ruah: The Rabbinic Call for Human Rights will offer training on how to turn synagogues into sanctuary congregations.

Before the piñata party at the Arch Street church, there was a ritual called Las Posadas, a re-enactment of the search for shelter by Mary and Joseph. Visitors collected outside the sanctuary doors and sang verses pleading to be let in. Church members responded from inside.

Flores and his family were inside, of course.

"What better work for the church to do," said the minister, Hynicka, his arm around them, "than to provide what we know God gives us, our heartfelt commitment to family, whether that family comes from Mexico, or from Philadelphia, or wherever."