In the shopping cart of a food stamp household: Lots of soda 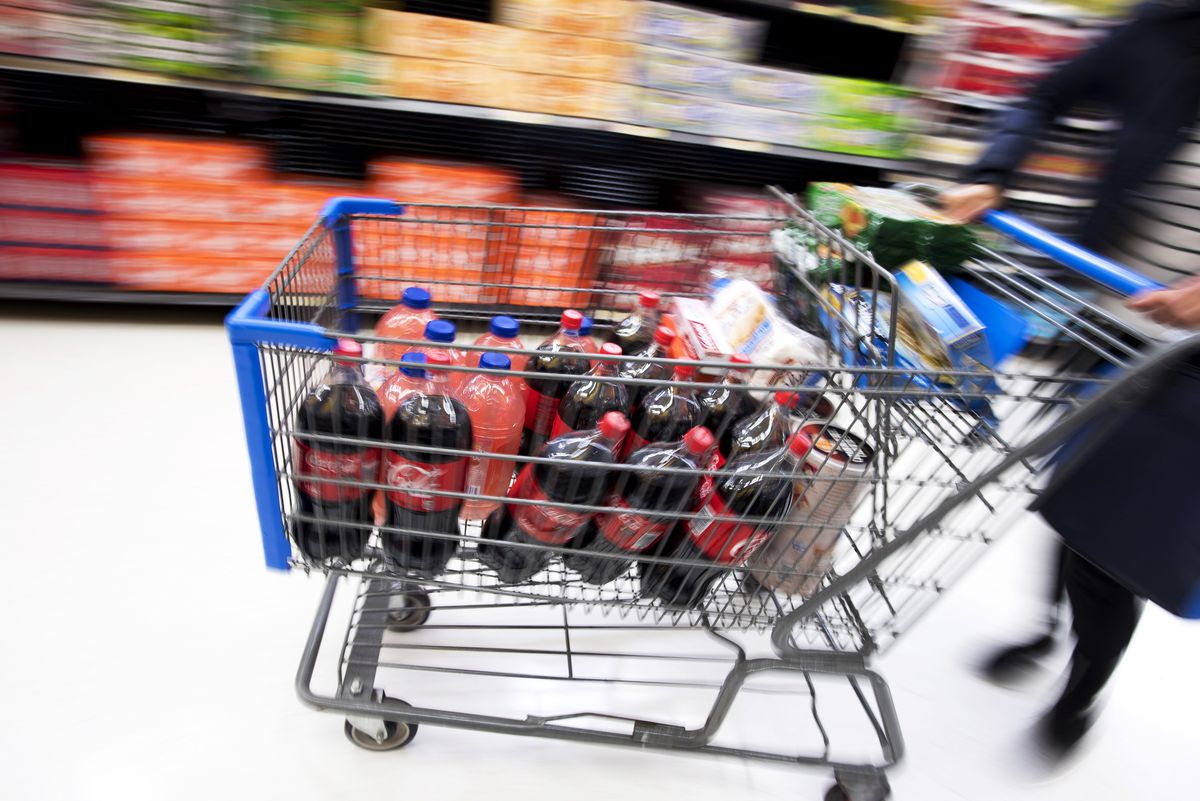 What do households on food stamps buy at the grocery store?

The answer was largely a mystery until now. The U.S. Department of Agriculture, which oversees the $74 billion food stamp program called SNAP, has published a detailed report that provides a glimpse into the shopping cart of the typical household that receives food stamps.

The findings show that the No. 1 purchases by SNAP households are soft drinks, which accounted for about 10 percent of the dollars they spent on food. "In this sense, SNAP is a multibillion-dollar taxpayer subsidy of the soda industry," said Marion Nestle, a professor of nutrition, food studies and public health at New York University. "It's pretty shocking."

For years, dozens of cities, states and medical groups have urged changes to SNAP, or the Supplemental Nutrition Assistance Program, to help improve nutrition among the 43 million poorest Americans who receive food stamps. Specifically, they have called for restrictions so that food stamps cannot be used to buy junk food or sugary soft drinks.

But the food and beverage industries have spent millions opposing such measures, and the USDA has denied every request, saying that selectively banning certain foods would be unfair to food stamp users and create too much red tape.

While the report, published recently, suggests that a disproportionate amount of food stamp money is going toward unhealthful foods, the USDA said it was unfair to single out food stamp recipients for their soft drink consumption.

The report was based on data from an unnamed, nationwide grocery chain, which provided the USDA with monthly records of food items bought in 2011 by more than 26 million households, about 3 million of them food stamp recipients. The grocery chain identified and tracked SNAP households by their use of SNAP benefit cards at the checkout aisle. One limitation of the report was that it could not always distinguish when SNAP households used their benefits, other money or a combination of the two to pay for transactions.

Across all households, the report found, "more money was spent on soft drinks than any other item" — a finding that reflects the fact that, while consumption of sugary drinks is lower today than it was a decade ago, the United States still consumes more sugary drinks than almost any other developed country, studies show.

The USDA report found that milk, cheese, potato chips, beef, cold cereal and baked bread were among the top purchases for all households. It indicated that all Americans bought ample amounts of desserts, salty snacks, candy and other junk foods. But the SNAP households spent slightly less money on nutritious foods, including fruits and vegetables, beans, eggs, nuts and seeds.

Overall, the report found, SNAP households spent about 40 cents of every dollar at the grocery store on "basic items" like meat, fruits, vegetables, milk, eggs and bread. Another 40 cents of every dollar was spent on "cereal, prepared foods, dairy products, rice and beans." Lastly, 20 cents of each dollar was spent on a broad category of junk foods that included "sweetened beverages, desserts, salty snacks, candy and sugar."

SNAP households spent 9.3 percent of their grocery budgets on soft drinks alone. That was slightly higher than the 7.1 percent figure for households that do not receive food stamps.

The USDA concluded that food stamp recipients and other households generally made similar purchases.

David Ludwig, director of the New Balance Foundation Obesity Prevention Center at Boston Children's Hospital, said the purpose of SNAP was to protect the health and well-being of the nation, not to ensure that poor households had ample access to sugary drinks.

"We have more evidence for the harms of sugary beverages than for any other category of food," he said, "and yet it tops the list of reimbursed products in SNAP."

Ludwig said other government programs had common-sense restrictions. The Special Supplemental Nutrition Program for Women, Infants and Children, better known as WIC, and the national school lunch program have strict nutrition standards. Medicare pays for necessary medical procedures but does not reimburse for ones it considers harmful, ineffective or unnecessary. SNAP, Ludwig said, should be structured similarly.

"No one is suggesting poor people can't choose what they want to eat," he said. "But we're saying let's not use government benefits to pay for foods that are demonstrably going to undermine public health."

The federal government provides SNAP benefits to roughly 23 million households each month, many of them single-parent homes at or below the poverty line. The average household receives about $256 in monthly benefits. That means a household that spent 10 percent of its SNAP money on soda could buy at least 20 2-liter bottles of orange Crush soda at a Fine Fare supermarket in New York City, or about 50 cans of Sprite at a Wal-Mart in Oakland, California.

Since 2004, a number of cities and states have sought to restrict sugary drinks from their SNAP programs, including Maine, Minnesota and New York City under Mayor Michael R. Bloomberg in 2011. But doing so requires permission from the USDA, and the agency has denied every official request.

Concannon at the USDA said the agency had "intermittent dialogue" with municipalities across the country about prohibiting the purchase of sugary drinks through SNAP. But he said the agency would grant a state or city permission to do so only on the condition that it first conducted "a rigorous pilot study" and offered food stamp recipients the ability to opt out of the soda restrictions.

"We'd want rigorous evaluation to see what is the impact of such a policy," he said.

PepsiCo lobbied the federal government to prevent restrictions on food stamp purchases in 2011, 2012 and 2013, according to the Center for Responsive Politics, a nonprofit that tracks money in politics. Coca-Cola, Kraft Foods and the sugar industry lobbied against a Florida bill in 2012 that would have banned using food stamps to buy soda and junk food. And in 2011, the Snack Food Association teamed up with beverage industry lobbyists and the National Confectioners Association, which represents candy companies, to defeat New York City's proposed ban on using food stamps to buy sugar-sweetened beverages.

Concannon said the USDA, rather than restricting junk foods, had made incentive programs that encourage nutritious foods a priority. The federal farm bill that designates money for the SNAP program, for example, set aside $100 million for programs that increase the value of food stamps that are used to buy fruits and vegetables at retail stores or farmers' markets.

"Our goal has been to nudge people in the right direction," he said.

While there is evidence that people do buy more fruits and vegetables when given incentives, research suggests that banning sugary drinks would have a far more powerful impact on health.

In 2014, a group of Stanford researchers studied 19,000 SNAP participants and compared whether banning sugary drinks or incentivizing fruits and vegetables would affect obesity rates. The researchers found that the incentive program would not. But banning sugary drinks from SNAP, they said, "would be expected to significantly reduce obesity prevalence and Type 2 diabetes incidence, particularly among ages 18 to 65 and some racial and ethnic minorities."

Michele Simon, a public health lawyer who published a critical 2012 report on the food stamp program, said the new report showed that the federal government was subsidizing many foods that its own dietary guidelines explicitly told Americans to consume less of.

"This is the first time we've had confirmation that this massive taxpayer program is promoting all the wrong kinds of foods," she said. "I think we now have the data to back up the policy argument that this program needs to be improved."