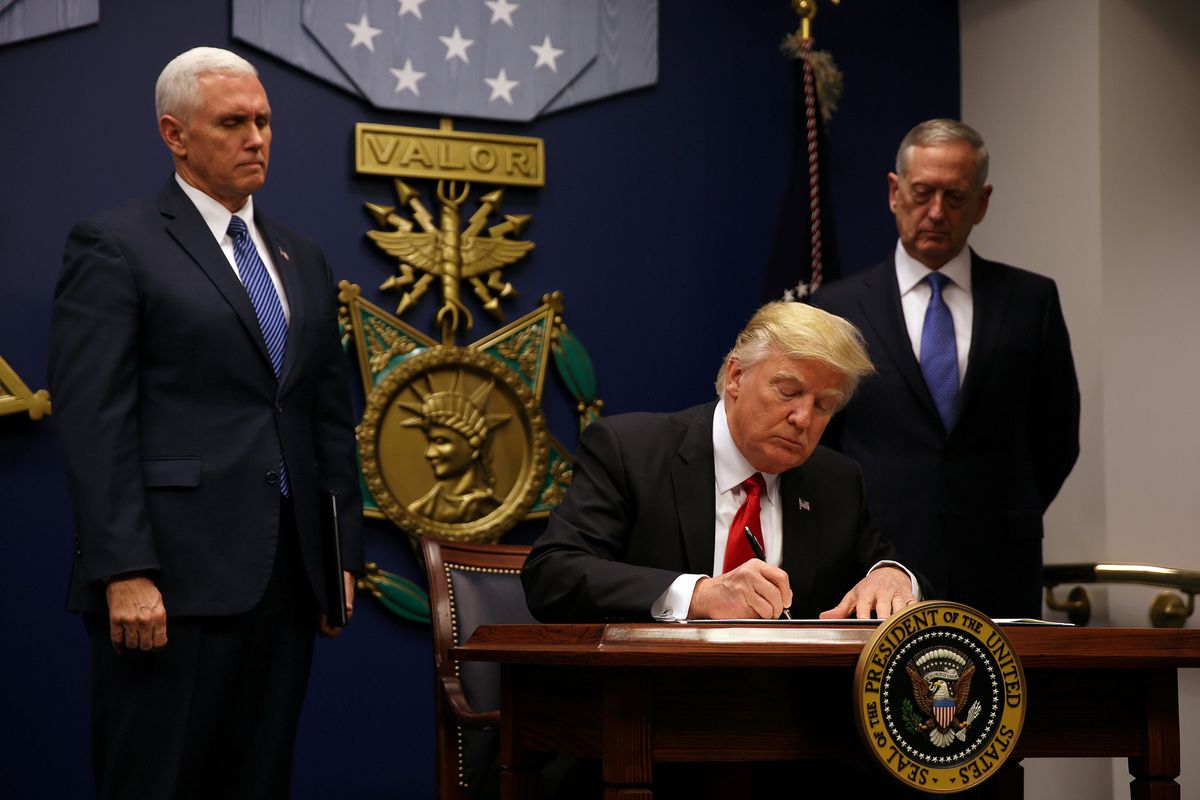 WASHINGTON – President Donald Trump signed an order Friday to suspend admission of all refugees for 120 days while a new system is put in place to tighten vetting for those from predominantly Muslim countries and give preference to religious minorities. Trump said that the goal is to screen out "radical Islamic terrorists" and that priority for admission would be given to Christians.

"We don't want them here," Trump said of terrorists in a signing ceremony at the Pentagon. "We only want to admit those into our country who will support our country and love deeply our people."

In an interview with the Christian Broadcasting Network earlier Friday, Trump was asked whether he would prioritize persecuted Christians in the Middle East for admission as refugees, and he replied, "Yes."

"So we are going to help them."

[How will Trump's executive orders on immigration, refugees impact Alaska?]

Since the beginning of the Syrian civil war and the rise of the Islamic State, many more Muslims than Christians have been killed or displaced because of the violence. A 2015 Washington Post poll found that 78 percent of Americans favored equal consideration for refugees regardless of religion.

The order was called "Protecting the Nation From Foreign Terrorist Entry into the United States" and contained a temporary entry ban that would affect citizens of seven countries – Iraq, Iran, Syria, Yemen, Sudan, Libya and Somalia.

The order calls for a halt to the flow of refugees from Syria until further notice and suspends all refugee admissions for 120 days until more analysis can determine which countries harbor the greatest threat. The annual intake of refugees for fiscal 2017 would also fall to 50,000 from more than 100,000 authorized now, according to the order.

The order also included a new policy that states and localities should have a say in determining whether refugees can resettle there. It calls for the secretary of homeland security to propose a way to make their involvement routine. Governors and mayors, mostly Republicans, have objected to refugees, once they are admitted to the country, being resettled in their jurisdictions, often in small and medium-size cities where the cost of living is lower than it is in big coastal cities.

Earlier drafts of the order called for the creation of safe zones to protect civilians in Syria – a feature that could require committing thousands of ground troops. But in the final order, there was no mention of such zones.

[Inside an Anchorage Somali restaurant, worry about a policy from a president some supported]

The downsizing of the refugee program, which had grown under former President Barack Obama's administration, fulfills Trump's campaign pledge to start the "extreme vetting" of immigrants and refugees, even though the United States already conducts the most rigorous and drawn-out screening process in the world.

Syrians are subject to special attention because the Islamic State controls significant amounts of territory in their country. An estimated 11 million Syrians have fled their homes since the outbreak of fighting in 2011, with almost 5 million registered as refugees and more than 6 million internally displaced.

U.S. vetting has changed significantly since the refugee program was suspended for several months after the attacks of Sept. 11, 2001.

After applicants register with the U.N. High Commissioner for Refugees, that agency refers some of the most vulnerable to the United States. They include single mothers and their children, victims of violence and people with severe medical conditions requiring sophisticated treatment. Last year, the UNHCR referred more than 34,000 applicants, up from 16,000 in 2015 and 10,000 the year before that.

Syrians being considered for resettlement in the United States pass through a complex, multitiered background investigation. It involves biometric and database screening, personal interviews to look for inconsistencies in their stories, and security screenings by the National Counterterrorism Center, the FBI, the Department of Homeland Security and the State Department.

In the fiscal year that ended in October, the United States admitted 12,500 Syrian refugees. An additional 3,500 were admitted for resettlement in the last three months of 2016. The overwhelming majority were women and children.

Now, with Trump's executive order, the flow grinds to an immediate halt. People who have sold their belongings in preparation for an imminent departure may not be allowed to board their flights to the United States. It was not immediately clear what would happen to those refugees already in the air when the order was signed.

Some refugees were finding their appointments with DHS officials canceled even before the order came into force, said Linda Hartke, head of the Lutheran Immigration and Refugee Service. Unaccompanied refugee minors living in camps, helped by the group, now cannot fly to the United States to live with foster families, she said.

Refugee advocates slammed the order as cruel, while proponents of tighter immigration controls said it would protect Americans from radical Islamists who might try to sneak into the United States as refugees and launch an attack.

"The ban on refugees will severely cripple the U.S. refugee program, leaving thousands who face life-threatening danger without humanitarian protection," said Greg Chen, director of advocacy for the American Immigration Lawyers Association. "This policy does not make us safer. It shows weakness and withdraws our nation from the position as global leader when so many refugees urgently need protection."

But skeptics of current vetting procedures question how effective they can be for refugees from a war-torn country such as Syria.

"If we're looking for the perfect way to deal with this, I'm not sure it exists," said Ira Mehlman, a spokesman for the Federation for American Immigration Reform (FAIR). "What we need to do is, the best we can, balancing the competing obligations of protecting people in imminent peril and the safety of the American people."

The UNHCR has warned for several years that the world is undergoing a refugee and migration crisis of epic proportions, comparable only to the period after World War II. Some analysts caution that the decision to suspend refugee admissions to a country that defines itself as a nation of immigrants could lead other governments to follow suit and undermine U.S. credibility.

"If you want ironclad guarantees, you'd have to stop all immigration, business travelers and students," said David Martin, who worked on immigration and refugee policy at the State Department and DHS. "If you're going to say you're not going to admit anybody to the United States, that's surrendering a key part of our heritage and blinding ourselves to genuine human suffering."