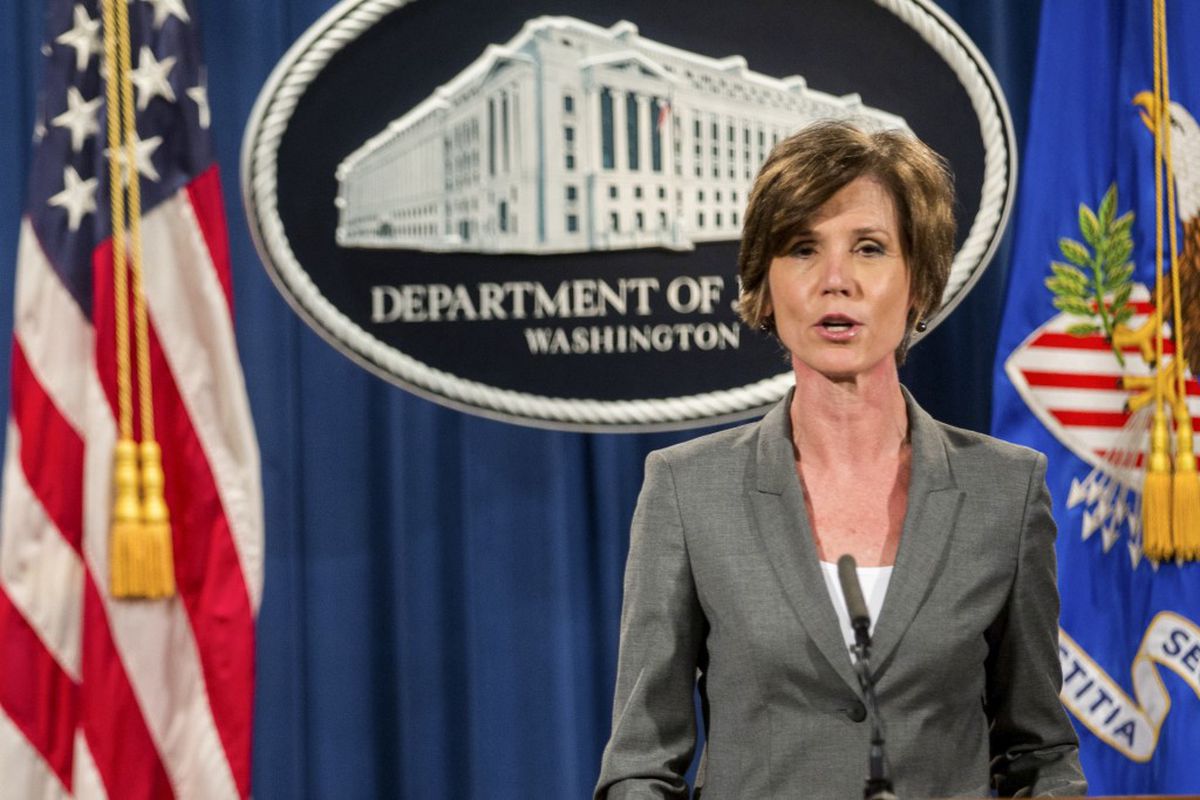 FILE — Sally Yates speaks during a news conference at the Department of Justice in Washington, June 28, 2016. Yates, a holdover from the Obama administration, was fired Monday after she ordered the Justice Department not to defend President Trump’s executive order on immigration in court. (Zach Gibson/The New York Times)

FILE — Sally Yates speaks during a news conference at the Department of Justice in Washington, June 28, 2016. Yates, a holdover from the Obama administration, was fired Monday after she ordered the Justice Department not to defend President Trump’s executive order on immigration in court. (Zach Gibson/The New York Times)

Repeated comments from President Donald Trump and his advisers about barring Muslims from entering the United States were at the heart of the decision Monday by acting Attorney General Sally Q. Yates to refuse to defend the president's executive order on immigration, senior officials involved said. Within hours of alerting Justice Department lawyers of her decision, the White House summarily fired her late Monday.

The firing capped three days of internal deliberations at the Justice Department. Like many others in the government, Yates, a holdover from the Obama administration, was caught by surprise Friday night by Trump's executive order temporarily halting all refugees from entering the country and indefinitely blocking immigration or visits from seven Muslim countries.

The Justice Department's Office of Legal Counsel had reviewed the order and signed off on its legality. But Yates and her staff lawyers believed the department had to consider the intent of the order, which she said appeared designed to single out people based on religion.

Trump had campaigned on a promise to single out Muslims for immigration restrictions. One of his advisers, Rudolph W. Giuliani, the former mayor of New York, said in an interview that Trump wanted a Muslim ban but needed "the right way to do it legally." Trump said in a later interview with the Christian Broadcasting Network that Christian refugees would be given priority for entry visas to the United States.

[In ban on migrants, Trump supporters see a promise kept]

In meetings Monday, some lawyers believed the department should defend the order, as it normally does. Others disagreed. Yates considered resigning, the officials said, but concluded that doing so would leave the decision to whomever succeeded her, even if in a temporary capacity.

So on Monday evening, she issued a stinging rebuke of the president and ordered government lawyers not to defend the ban in court, where it is being contested.

Yates, who was deputy attorney general for the past year and a half of the Obama administration, was running the department temporarily until the Senate could confirm a replacement. Her order was in effect for only a matter of hours before a White House courier arrived at the Justice Department with a handwritten letter.

Democrats hailed her as a hero. But while Yates was a reliably liberal voice on issues of civil rights, criminal justice and sentencing, she spent decades working as a career prosecutor in Atlanta under administrations from both parties. She prosecuted Eric Rudolph, known as the Olympic Park bomber, and was viewed as an aggressive white-collar prosecutor. Sen. Johnny Isakson, R-Ga., introduced her at her confirmation hearing in 2015.

At those hearings, Republicans were furious about former President Barack Obama's order liberalizing immigration policy and questioned Yates about whether she would be willing to stand up to the president. Sen. Jeff Sessions, R-Ala., Trump's nominee for attorney general, was particularly pointed in his questioning.

As deputy attorney general, Yates was the department's leading voice on issues of clemency and sentencing reform and led the push for prosecutors to bring charges against individual executives involved in corporate wrongdoing.

Yates and Attorney General Loretta E. Lynch earned the ire of Democrats — including many in the department — for not intervening and prohibiting FBI Director James B. Comey from sending a letter to Congress in the final days of the presidential campaign. The letter raised the prospect of new and potentially damaging evidence against Hillary Clinton related to an investigation that had been closed. Nothing came of the new evidence, and Clinton's team says the letter cost her the presidency.

Former Attorney General Eric H. Holder Jr., a Democrat, posted a photograph of Yates on Twitter late Monday and said, "This is what skill, judgment and courage look like."

Republicans disagreed, including George J. Terwilliger III, a former deputy attorney general who, like Yates, briefly served as acting attorney general. "In a legal dispute in our adversary system concerning an executive order, the attorney general's and the Justice Department's responsibility is to be an advocate for the president's position," he said.

He said Yates' actions "makes her and the Justice Department look blatantly political."