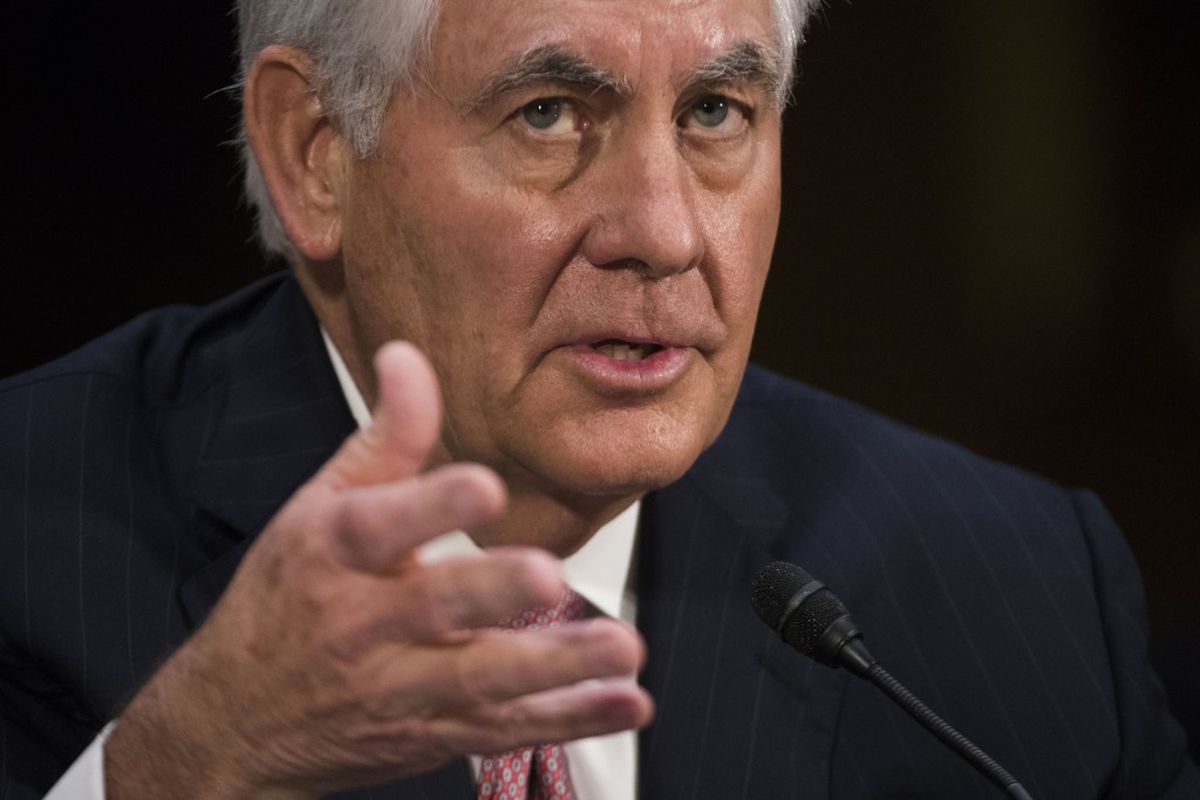 WASHINGTON – Rex Tillerson won confirmation Wednesday to become secretary of state, placing a lifelong oil company executive at the helm off what President Donald Trump has promised will be an "America first" foreign policy.

Tillerson takes office after a chaotic debut for the Trump administration that saw big swings away from the national security and foreign policy policies in place under the Obama administration. The State Department he now heads has a central role in refugee resettlement and other immigration and travel-related policies now at issue in a White House order suspending the admission of refugees and restricting entry for citizens from several Muslim-majority nations.

One of his chief outside backers, former defense secretary Robert M. Gates, said Sunday that the immigration order is likely to make Tillerson's job as chief diplomat harder. Gates, a Republican who recommended Tillerson to Trump as a dark horse candidate, is among a long bipartisan list of foreign policy experts who have argued that actions that appear to target Muslims play into the hands of extremists who claim that the United States is at war with Islam.

Tillerson's confirmation was not in doubt despite Democratic opposition. The 56-43 vote followed announcements of support from three Republicans who had earlier expressed reservations about the recently retired ExxonMobil CEO.

The Senate Foreign Relations Committee had approved Tillerson along party lines, a show of Republican unity that masked discomfort among some conservatives over Trump's approach to Russia and human rights issues.

Sen. Marco Rubio, R-Fla., who had questioned Tillerson more aggressively than many Democrats during a contentious day-long Jan. 11 confirmation hearing, had said last week that he would back Tillerson despite lingering doubts on human rights and other grounds.

"Given the uncertainty that exists both at home and abroad about the direction of our foreign policy, it would be against our national interests to have this confirmation unnecessarily delayed or embroiled in controversy," Rubio said in a lengthy statement posted on Facebook. "Therefore, despite my reservations, I will support Mr. Tillerson's nomination in committee and in the full Senate."

Rubio noted that he remains troubled that Tillerson refused to say that Russian President Vladimir Putin had committed war crimes. Democrats pointed to Tillerson's years-long relationship with Putin, his answers on climate change and other positions in voting against him.

Republican opposition was melting away even before Rubio's announcement. Sens. John McCain, R-Ariz., and Lindsey O. Graham, R-S.C., had announced their support for Tillerson before the committee voted. Like Rubio, McCain and Graham had voiced worries about Tillerson's ties to Russia.

Tillerson drew support from some Democrats, including Sen. Joe Manchin (W.Va.), who said he based his support in part on having known Tillerson from their shared involvement with the Boy Scouts of America.

"Rex Tillerson's extensive career will bring a unique perspective to the State Department, and I believe he will provide wise counsel and objective advice to the president on our nation's foreign policy," Manchin said in a statement announcing his intention to vote in favor.

Manchin also praised Tillerson's decision to divest all of his ExxonMobil stock and recuse himself at least temporarily from any State Department action involving the company.

The 64-year-old Texan has no prior government experience and no formal background in foreign policy or diplomacy. His admirers, however, say he has a vast knowledge of world affairs and geopolitics born of years of international energy exploration and production.

Tillerson set out a mostly mainstream Republican vision of foreign policy at his confirmation hearing and assured senators he would not be overly friendly with Russia or Middle Eastern nations where his company, the world's largest oil firm, has done business. He has said little about his personal goals for diplomacy and it is not clear whether he will have a signature issue, such as climate change for former Secretary of State John F. Kerry or helping women and girls for former Secretary of State Hillary Clinton.

The department he heads was in unusual turmoil before the executive order was announced Friday. A large number of senior Foreign Service officers resigned or were nudged out of top positions last week, signaling an intent by the Trump administration to install many new faces. There are vacancies at the top of major department offices, including those responsible for the Mideast and Europe.

Gates, who served as defense secretary under presidents George W. Bush and Barack Obama and as director of the Central Intelligence Agency under President George H.W. Bush, said he expects a number of countries will have a "negative reaction" to Trump's order. He said the order, paired with Obama's draw-down of troops in Iraq and Afghanistan and Trump's "America First" platform, could signal that the United States is backing away from global commitments.

"I would say that the actions and the rhetoric of the new president simply continue that drumbeat of giving the impression around the world that the United States is pulling back," Gates said Sunday on ABC's "This Week." "This creates, whether we want it or not, a vacuum, and that vacuum will not be filled by benign forces. "

Among the top issues facing the new secretary of state is the civil war and terrorist threat in Syria, which Trump has vowed to tackle immediately and more forcefully than Obama. The future of economic sanctions on Russia will also arise quickly and could be contentious. Tillerson was vague during his hearing about whether he supports the extension of international economic penalties imposed after Russia annexed Crimea and gave support to insurgents in Ukraine's eastern provinces.

Tillerson was also somewhat vague about climate change, an issue he oversaw as ExxonMobil gradually shifted its position over the last decade. He told senators he believes "the risk of climate change does exist, and the consequences could be serious enough that action should be taken." But he avoided blaming human activity directly or exclusively and said the ability to predict the effect is "very limited."

Tillerson was a late addition to the roster of candidates Trump auditioned for what is often considered the most important Cabinet post, and someone Trump did not know personally.

Trump chose Tillerson after passing over former Republican presidential nominee Mitt Romney, who had been highly critical of Trump during the campaign. Tillerson was also recommended by Secretary of State Condoleezza Rice, like Gates a prominent Republican who had worked closely with the oil executive.

In naming Tillerson, Trump called him an "embodiment of the American Dream" and cited the oil executive's "tenacity, broad experience and deep understanding of geopolitics."

Sean Sullivan and Kelsey Snell contributed to this post.