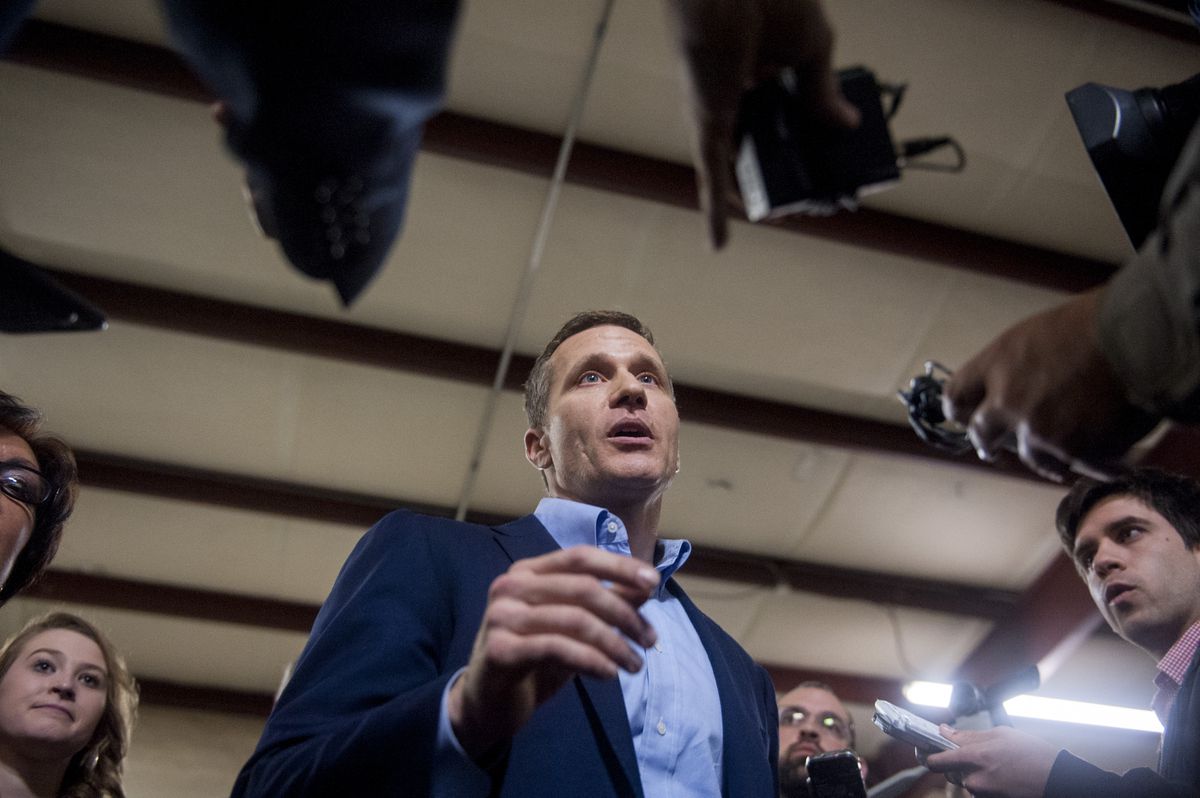 When Republicans in Kentucky seized total control of the state government last year, Damon Thayer, the majority leader in the state Senate, began asking around for advice from counterparts in other capitals where the party already dominated the legislative and executive branches.

How should we handle all this power? he wanted to know.

One answer impressed him, Thayer said, from a senior Republican lawmaker in Wisconsin: "Move quickly."

Kentucky Republicans have done just that, swiftly passing laws to roll back the powers of labor unions and restrict access to abortion. But they are only getting started, Thayer said in an interview: They also plan to make sweeping changes to the education and public pension systems this year.

And they have plenty of company.

While Republicans in Washington appear flummoxed by the complexities of one-party rule, struggling with issues from repealing the Affordable Care Act, known as Obamacare, to paying for President Donald Trump's promised wall on the Mexican border, rising party leaders in the states seem far more at ease and assertive. Republicans have top-to-bottom control in 25 states now, holding the governorship and the entire legislature, and Republican lawmakers are acting with lightning speed to enact long-standing conservative priorities.

[Democrats seek to convert activism into a movement]

In states from New England to the Midwest and across the South, conservative lawmakers have introduced or enacted legislation to erode union powers and abortion rights, loosen gun regulations, expand school-choice programs and slash taxes and spending.

State Sen. Scott L. Fitzgerald of Wisconsin, the Republican majority leader, said conservatives in the states had taken the party's national victories in November as a directive to "shake up" government.

"That has been amped up as a result of Donald Trump being elected president," he said. "There's a higher expectation now."

If Republicans in the states have taken Trump as an inspiration, in some respects they are also largely unburdened by his personality and his political whims. Republicans in Congress are plainly struggling to overcome deep internal disagreements and to balance traditional conservative goals with Trump's distinctive priorities. But for Republicans in state capitals, these are comparatively remote considerations.

Some Democrats fear that while their own party is consumed nationally with fighting Trump, leaders and activists may be too distracted to put up effective roadblocks to the ideological agenda that Republicans are advancing at the state level.

"Progressives cannot afford to forget about what's happening in our backyards," said Nick Rathod, executive director of State Innovation Exchange, a Colorado-based liberal group focused on state legislatures. "Some of it is even more egregious than what is currently happening in Washington, D.C."

Republicans have gained power rapidly in the states since the 2008 presidential election, winning 33 governorships and in many instances entrenching themselves in power through legislative redistricting.

Riding to office on a wave of discontent with the Obama administration, headstrong governors in states like Wisconsin and Ohio embarked on a ferocious quest to transform their states, repeatedly battling powerful unions and popular backlash. Sidelining Democratic lawmakers and grinding down liberal interest groups, these Republicans may have helped pave the way for Trump's victories in a string of traditionally blue Midwestern states last year.

Acting fastest at the moment, though, are four states where Republicans won total control of the government only in November. In addition to Kentucky, Missouri and New Hampshire became one-party states with the election of Republican governors, and Republicans in Iowa snatched away the state Senate, where Democrats had held their last grip on power.

In all four states, Republicans are racing to strip back the influence of labor unions, a key Democratic constituency.

In Missouri, where union membership has waned, Gov. Eric Greitens, a telegenic former member of the Navy SEALs, signed a "right to work" bill into law Monday, denying unions the power to require that workers at companies they represent pay dues or their equivalent as a condition of employment. In Kentucky, Gov. Matt Bevin signed a similar measure in January, along with the repeal of a law that kept wages high on public construction projects. And in New Hampshire, state Sen. Jeb Bradley, the Republican majority leader, said right-to-work legislation was a top priority.

In Iowa, Republican leaders announced this past week that they would pursue sweeping changes to the collective bargaining rights of public employees. State Sen. Bill Dix, the new Republican

majority leader, said his party had campaigned on such changes — which would cut deeply into unions' negotiating power — and intended to make good on its commitments. He said Republicans would also seek to change state laws governing health care and to enshrine in the state constitution the right to bear arms.

His counterpart in New Hampshire, Bradley, a former member of Congress, echoed that language, but cautioned in an interview that Republicans had to move deliberately and not just fast.

Democrats and labor unions, which in the past have been able to thwart conservative legislation with the help of a supportive governor or a bloc of allies in the legislature, describe the onslaught in newly Republican states as overwhelming.

"They're killing us here in the state of Missouri," said John Stiffler, executive secretary-treasurer of the St. Louis Building & Construction Trades Council.

Some unions in the state, shut out of power, are attempting to put the right-to-work law up for a direct vote in a 2018 referendum. For the moment, Stiffler said, union leaders are seeking to meet with Greitens in the hope of finding a compromise on other policies, like prevailing-wage legislation.

"We're trying to find a way to get even a small audience with him," Stiffler said of Greitens.

The Republican agenda in the states goes well beyond limiting unions. Party leaders in Kentucky, New Hampshire and Missouri have signaled that they plan to expand school-choice and charter school programs and, in some instances, to pursue tort reform and to place new regulations on voting.

Beleaguered Democrats see each policy as devised to undercut one of their core political constituencies: teachers, trial lawyers, minority voters or young people.

In several states that the party has controlled for a longer span, Republican governors have also announced aggressive plans to overhaul the size and functions of government, including a Wisconsin welfare-overhaul proposal, backed by Gov. Scott Walker, and a large program of tax cuts in Florida, championed by Gov. Rick Scott. Both men were first elected in 2010.

In New Hampshire, Bradley had long been pushing a bill to let people carry concealed guns without a permit; repeatedly, it passed both legislative houses only to be vetoed by Gov. Maggie Hassan, a Democrat.

"We had no chance of overriding her veto," lamented the silver-haired Bradley, but Hassan was elected to the Senate in November. The gun bill cleared the legislature again Thursday and the new Republican governor, Chris Sununu, has "every intention of signing it," David Abrams, a spokesman of his, said.

In Kentucky last month, Bevin, 50, an activist with close ties to the Tea Party, signed a set of new restrictions on abortion, banning the procedure after 20 weeks and requiring that every woman who seeks an abortion undergo an ultrasound first.

Iowa Republicans have advanced a bill to defund Planned Parenthood; Missouri legislators have filed a barrage of anti-abortion bills, including one that would ban the procedure entirely, in defiance of the Supreme Court. In a handful of states including Missouri and Texas, lawmakers are considering legislation that would designate public restrooms and locker rooms as gender-specific.

And as Trump attempts to crack down on "sanctuary cities" at the national level, lawmakers in states like Texas and Tennessee have proposed measures to force municipalities to enforce federal immigration law more assertively.

Democrats and their allies, including groups like Planned Parenthood, often have little recourse in these states but to rally popular outcry and organize for the next election, or to challenge Republican-enacted policies in court.

They have succeeded from time to time, including in North Carolina last year, ousting a Republican governor, Pat McCrory, who signed legislation gutting anti-discrimination protections for gay and transgender people. In 2013, Virginia voters broke a Republican monopoly by electing a Democratic governor, Terry McAuliffe, who campaigned in part against abortion restrictions passed by a Republican-controlled legislature.

And in deep-red Louisiana, voters elected a Democratic governor, John Bel Edwards, in 2015, to succeed the unpopular Bobby Jindal, who pursued a hard-line agenda and briefly ran for president.

McAuliffe, one of a growing number of Democrats who have called on the national party to devote more attention to state elections, said Democrats should recognize the role governors play in heading off the kind of conservative legislation they find deeply offensive.

"This isn't scare tactics — this is actually happening," McAuliffe said. "If you had a Republican governor, he would have had to sign them, and think where we would be today."

In Iowa, a Democratic state senator, Janet Petersen, said the zeal of the new Republican majority had broken a mood of passivity among rank-and-file Democrats. On the Planned Parenthood issue alone, Petersen said her office had received about 1,500 emails from alarmed constituents.

"If there's one positive thing to come out of this horrible legislation," she said, "it's that complacency is gone."