Trump criticized Obama for golfing. Now it's Trump on the links. 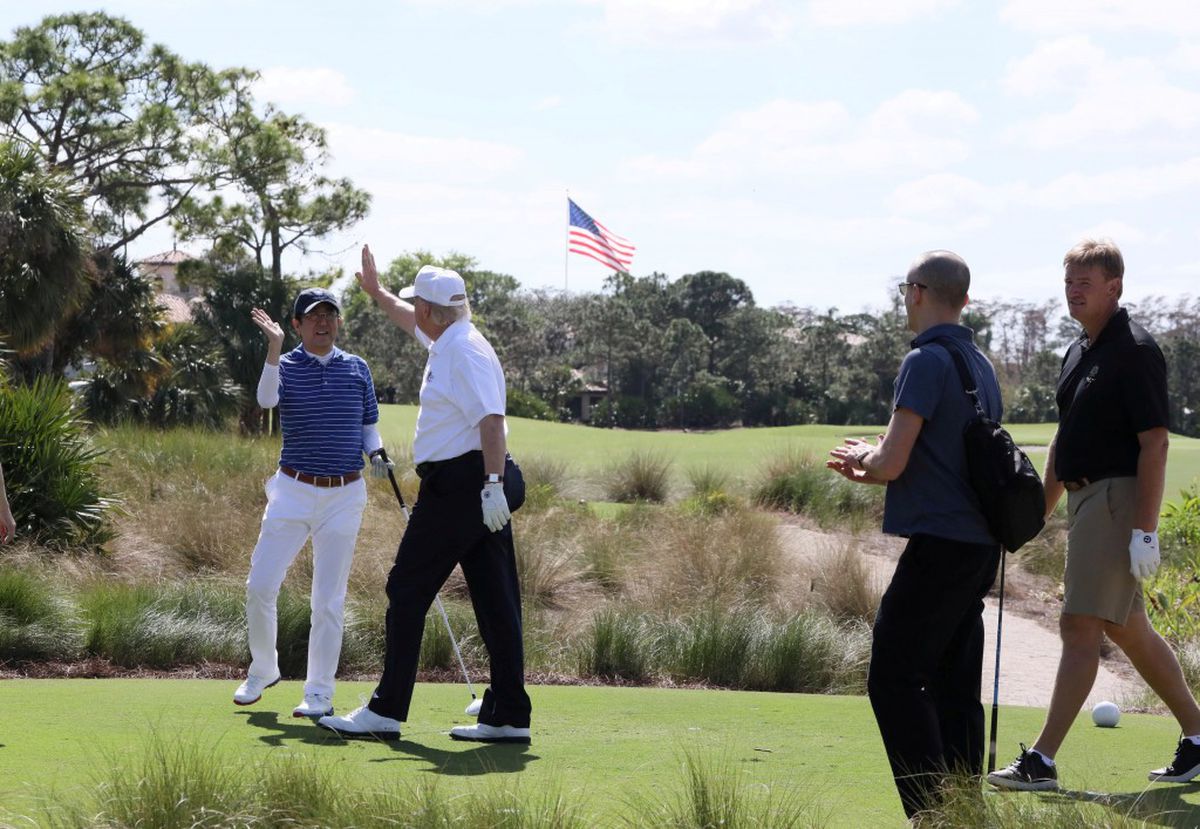 As a private citizen, Donald Trump was repeatedly critical of President Barack Obama's fondness for relaxing with a round of golf.

"Can you believe that, with all of the problems and difficulties facing the U.S., President Obama spent the day playing golf." Trump tweeted on Oct. 13, 2014. "Worse than Carter."

"We pay for Obama's travel so he can fundraise millions so Democrats can run on lies," he said a day later. "Then we pay for his golf."

Then for a third time that month, Trump tweeted about Obama's golf habit on Oct. 23, 2014.

"President Obama has a major meeting on the N.Y.C. Ebola outbreak, with people flying in from all over the country, but decided to play golf!"

As a president, though, Trump seems to have had a change of heart about the appropriateness of a president hitting the links.

It was the president's second visit this month to South Florida, where he owns the Mar-a-Lago resort in West Palm Beach along with the golf courses.

Last weekend, he spent four and a half hours at one of his golf clubs, a day before hosting a Super Bowl Party at Mar-a-Lago, which its original owner, heiress Marjorie Merriweather Post, named the "winter White House."

Little was known about Trump's time at either golf club this month — the White House last week declined to confirm whether he even played, or who accompanied him. On Saturday, Trump and his aides covered doors and windows at the Trump National Golf Club in Jupiter to keep the journalists inside from snapping photos of the president and Abe on the course.

But an administration-approved photo appeared on Trump's social media pages that showed the two leaders high-fiving under a blue sky dotted with fluffy white clouds, a gigantic American flag waving in the background.

It was a change for a man who over the past five years had repeatedly criticized the sitting president for golfing, on the grounds that the trips were costly to taxpayers and came at the expense of time that he thought Obama should have spent on government duties.

Since Trump became president, his resort, Mar-a-Lago, has doubled its initiation fee to $200,000, drawing a rebuke from critics who say he is profiting off the presidency. But Trump and his aides say that using an informal setting outside Washington to entertain foreign leaders — as other presidents have done — will put those dignitaries at ease.

On Saturday, Trump told reporters that he and Abe "got to know each other very, very well" while golfing.

Trump was not always so critical of Obama's golf habit. In June 2012, he tweeted that he would someday like to play a round of golf with the president.

And that same year, he suggested that Obama should have expanded his circle of golfing buddies to include more Republicans: "That way maybe the terrible gridlock would end."

But soon Trump had soured on Obama's time on the greens, often tweeting his critiques and retweeting those of his followers:

Trump is, by at least one account, a fine golfing companion. In December, he hit the greens with Tiger Woods, who had also played with former Presidents Bill Clinton, Obama and George H.W. Bush.

Woods' game with Obama, in 2013, became the subject of conservative anger when The Washington Times reported last year that the game had cost taxpayers nearly $4 million. The fact-checking website Snopes found that claim to be mostly false, and noted that the figure was "based on an accounting formula that is often highly misleading about the true costs involved."

As for his own round with Woods, Trump, in an Instagram post on Dec. 24, said he had had a "great" time, and that they were joined by Trump's son Donald Trump Jr. and granddaughter Kai.

Woods, in a blog post, said he and Donald Trump had played for fun while Woods tested new drivers.

"What most impressed me was how far he hits the ball at 70 years old," Woods wrote. "He takes a pretty good lash," he said, adding, "Our discussion topics were wide-ranging; it was fun."