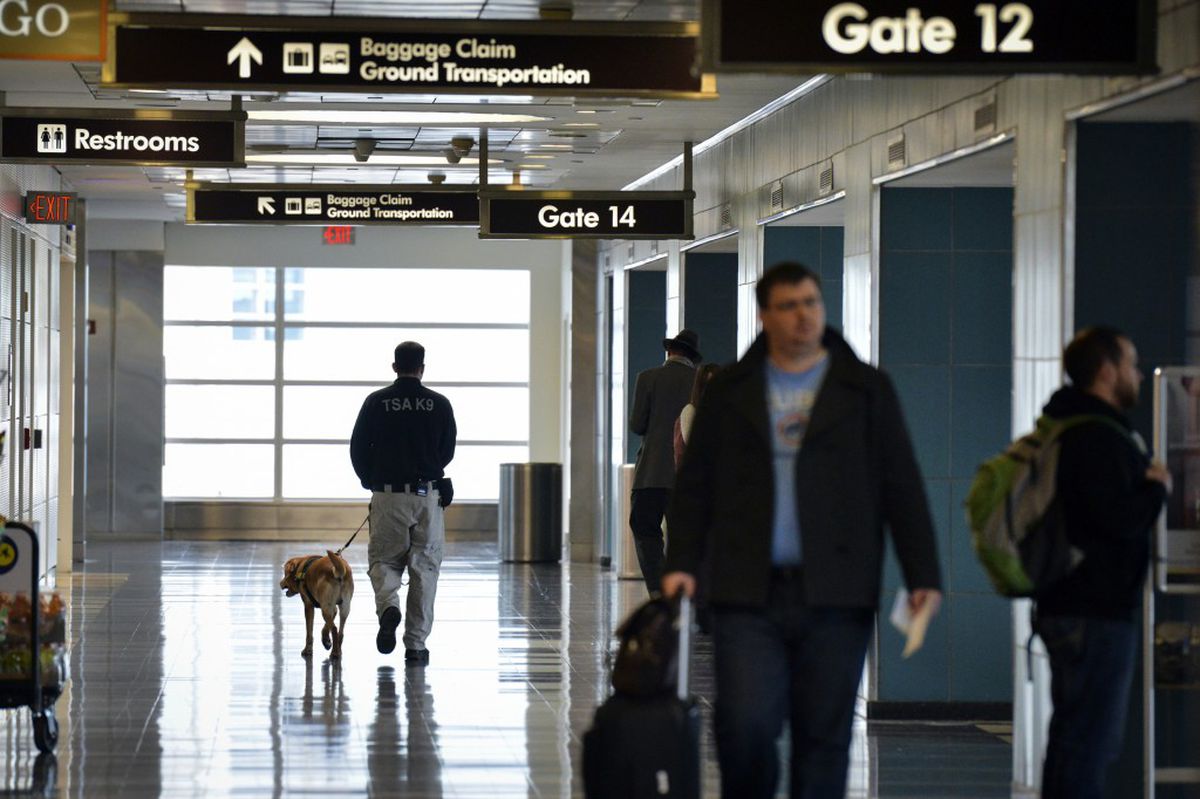 Douglas Timberlake of the Transportation Security Administration walks with a bomb-sniffing dog at Reagan National Airport in December. Under the Trump administration’s proposal, the TSA would have four programs cut that cost the agency $187 million. The programs are considered a vital piece of security. (Washington Post photo by Jahi Chikwendiu)

Douglas Timberlake of the Transportation Security Administration walks with a bomb-sniffing dog at Reagan National Airport in December. Under the Trump administration’s proposal, the TSA would have four programs cut that cost the agency $187 million. The programs are considered a vital piece of security. (Washington Post photo by Jahi Chikwendiu)

WASHINGTON – The Trump administration, searching for money to build the president's planned multibillion-dollar border wall and crack down on illegal immigration, is weighing significant cuts to the Coast Guard, the Transportation Security Administration and other agencies focused on national security threats, according to a draft plan.

The proposal, drawn up by the Office of Management and Budget, also would slash the budget of the Federal Emergency Management Agency, which provides disaster relief after hurricanes, tornadoes and other natural disasters. The Coast Guard's $9.1 billion budget in 2017 would be cut 14 percent to about $7.8 billion, while the TSA and FEMA budgets would be reduced about 11 percent each to $4.5 billion and $3.6 billion, respectively.

The cuts are proposed even as the planned budget for the Department of Homeland Security, which oversees all of them, grows 6.4 percent to $43.8 billion, according to the plan, which was obtained by The Washington Post. Some $2.9 billion of that would go to building the wall on the U.S.-Mexico border, with $1.9 billion funding "immigration detention beds" and other Immigration and Customs Enforcement expenses and $285 million set aside to hire 500 more Border Patrol agents and 1,000 more ICE agents and support staffers.

The plan puts the administration in the unusual position of trading spending on security programs for other security priorities at the southern border, raising questions among Republican lawmakers and homeland-security experts.

Overall, funding for ICE would grow about 36 percent to $7.9 billion, while the budget for Customs and Border Protection would increase 27 percent to $14.2 billion.

Michael Short, a White House spokesman, cautioned Tuesday that the Trump administration is still early in the process of working on the budget, which the administration will send to Congress later this month. He and a DHS spokesman, David Lapan, referred other questions to the OMB, which did not respond to requests for comment.

"Trying to draw conclusions this early would be extremely premature," Short said.

Rep. Duncan Hunter, R.-Calif., who supported Donald Trump's run for president and oversees the House Transportation subcommittee on the Coast Guard and maritime transportation, questioned whether OMB officials are on the same page as President Trump, citing the sea service's roles in stopping illegal immigration and the flow of drugs into the United States from South America.

"OMB has always treated the Coast Guard like a little piggy bank that they can go after whenever they need money for anything else," Hunter said. "If the president is serious about getting after the cartels and getting after drug networks, this makes no sense."

The Coast Guard cuts include deactivating Maritime Security Response Teams, which carry out counterterrorism patrols in ports and sensitive waterways, and canceling a contract with Huntington Ingalls Industries to build a ninth national security cutter, with a potential savings of $500 million.

Rick "Ozzie" Nelson, a former Navy helicopter pilot and national security expert with the Center for Strategic and International Studies, said that the decisions would effectively sideline the service in missions in which it could be the most effective.

"If they're not there to do it, who is there to do it?" Nelson said of port security. "We're not going to put destroyers and frigates off the coast to protect those ports. That's a Coast Guard mission and capability."

At the TSA, the proposed budget cuts, first detailed by Politico, would eliminate four programs that cost the agency $187 million. The programs have been considered a vital piece of airport security and for preventing a repetition of the Sept. 11, 2001, hijackings after planes are aloft.

Training for what is known as the "armed pilot" program, begun after 9/11, would be eliminated at a savings of $20 million. The training was intended to prepare pilots and crews for an attempted armed takeover of an aircraft.

"If you were on one of the four hijacked planes on 9/11, you'd sure say it was important," said former TSA administrator John Pistole. "To me, it's a relatively small investment for the potential for the risk-mitigation value. It's all about how much risk do you want to take on. I would advocate for a reduction in that program but not elimination."

The $45 million in grants that local law enforcement uses to patrol in and around airports also would be eliminated.

The fourth program slated for elimination uses specially trained TSA agents to watch passenger behavior in airports, and particularly as fliers approach checkpoints, to single out those who appear to behave oddly.

The budget proposal said $65 million also could be saved by eliminating that Behavior Detection Officer program. The value of the program was questioned by the Government Accountability Office in a 2013 report, but Pistole, who then headed the TSA, responded that it provided a "crucial layer of security" that brought 2,116 passengers to the attention of law enforcement in 2012, resulting in 30 boarding denials and 183 arrests.

At FEMA, a corner of the federal government whose budgets were beefed up after the 2001 terrorist attacks and Hurricane Katrina, the proposed cuts would slash some programs whose effectiveness has long come under criticism. Research into bio-surveillance threats and other research and development work that gets tens of millions of dollars in federal funding a year would take a 28 percent hit, examples of programs the budget proposal describes as "having failed to show meaningful results."

But the spending plan – which could cut $361 million from FEMA's $3.5 billion budget – also eliminates or reduces the federal commitment to helping states and local governments prepare for natural disasters through training, salaries and benefits for staff, coordination and state-of the-art equipment. These grants help communities prepare for emergencies so that local and state governments can coordinate and respond quickly.

Other programs would require localities and states to contribute a greater share than they do now.

Emergency management officials noted that FEMA has for years promoted and refined a national response system that requires local communities to follow the same emergency response strategies. The cuts would undermine that progress, they said, and result in a less sophisticated response to emergencies.

"When you propose not just cuts but draconian cuts, your ability to respond to a disaster can cause lives to be lost and property to be damaged," said Nick Crossley, emergency-management director in Hamilton County, Ohio, and first vice president of the International Association of Emergency Managers, which represents 4,000 local officials across the country.

He said pouring the money saved from FEMA into border security would be "catastrophic."

"Defense and security at the border are important," he said. "But you're damaging the national system that makes us the strongest country when it comes to being prepared for disasters."

Homeowners in flood-prone areas of the country also would be levied a surcharge on their flood insurance, according to the document, although the OMB has been asked to come up with a plan to limit the extra payment for homeowners with "lower-value" homes.