After Trump fired Comey, his staff scrambled to explain why 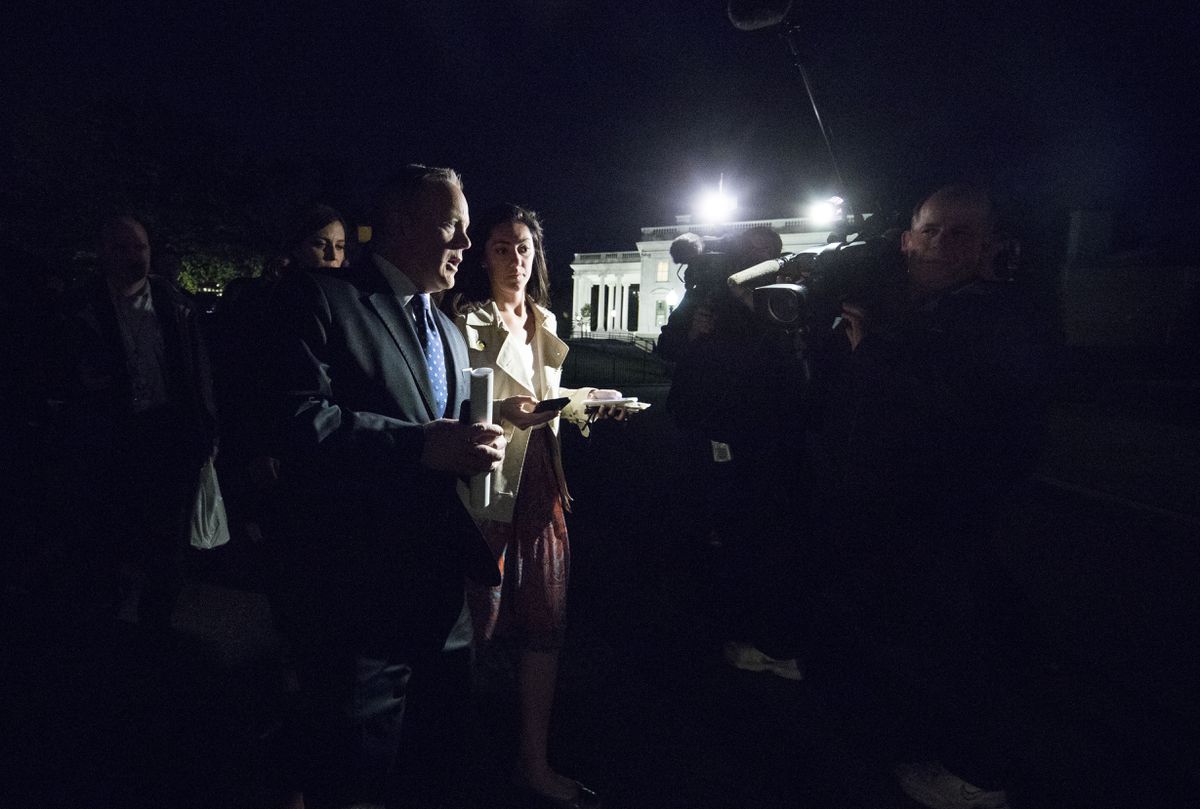 Sean Spicer, the White House press secretary, speaks with reporters about the firing of FBI Director James Comey as he walks into the West Wing of the White House, May 9, 2017. President Donald Trump fired Comey on Tuesday. (Doug Mills/The New York Times)

Sean Spicer, the White House press secretary, speaks with reporters about the firing of FBI Director James Comey as he walks into the West Wing of the White House, May 9, 2017. President Donald Trump fired Comey on Tuesday. (Doug Mills/The New York Times)

WASHINGTON – White House press secretary Sean Spicer wrapped up his brief interview with Fox Business from the White House grounds late Tuesday night and then disappeared into the shadows, huddling with his staff behind a tall hedge. To get back to his office, Spicer would have to pass a swarm of reporters wanting to know why President Donald Trump suddenly decided to fire the FBI director.

For four hours, Spicer and his staff had been scrambling to answer that question. Spicer had wanted to drop the bombshell news in an emailed statement but it was not transmitting quickly enough, so he ended up standing in the doorway of the press office around 5:40 p.m. and shouting a statement to reporters who happened to be gathered in the briefing room. He then vanished, with his staff locking the door leading to his office. The press staff said that Spicer might do a briefing, then announced that he definitely wouldn't say anything more that night. But as Democrats and Republicans began to criticize and question the firing with increasing levels of alarm, Spicer and two prominent spokeswomen were suddenly speed-walking up the White House drive to defend the president on CNN, Fox News and Fox Business.

"Another Tuesday at the White House," Sarah Huckabee Sanders quipped as she finished speaking on Fox News from its outdoor set, as the voice of Kellyanne Conway continued to banter with CNN's Anderson Cooper from the next booth over.

After Spicer spent several minutes hidden in the bushes behind these sets, Janet Montesi, an executive assistant in the press office, emerged and told reporters that Spicer would answer some questions, as long as he was not filmed doing so. Spicer then emerged.

Spicer got his wish and was soon standing in near darkness between two tall scrubs, with more than a dozen reporters closely gathered around him. For 10 minutes, he responded to a flurry of questions, vacillating between light-hearted asides and clear frustration with getting the same questions over and over again.

The first question: Did the president direct Deputy Attorney General Rod J. Rosenstein to conduct a probe of FBI Director James B. Comey?

As Spicer tells it, Rosenstein was confirmed about two weeks ago and independently took on this issue so the president was not aware of the probe until he received a memo from Rosenstein on Tuesday, along with a letter from Attorney General Jeff Sessions recommending that Comey be fired. The president then swiftly decided to follow the recommendation, notifying the FBI via e-mail around 5 p.m. and in a letter delivered to the FBI by the president's longtime bodyguard. At the same time, the president personally called congressional leaders to let them know his decision. Comey learned the news from media reports.

"It was all him," Spicer said of Rosenstein, as a reporter repeated his answer back to him. "That's correct – I mean, I can't, I guess I shouldn't say that, thank you for the help on that one. No one from the White House. That was a DOJ decision."

The news Tuesday was surprising for a number of reasons, especially since the president once delighted in Comey's investigation of Democrat Hillary Clinton's use of a private email server – an investigation that is now at the heart of Trump's explanation for firing Comey. Some have then wondered aloud if the president is instead trying to punish Comey for investigating ties between his campaign and Russia.

When pressed on this, Spicer would put forth Rosenstein's resume: A prosecutor with more than 30 years of experience who served as a U.S. Attorney during the Obama administration and was overwhelmingly confirmed for his new position as deputy attorney general by Congress.

Spicer said he's not aware of any of Rosenstein's superiors who might have directed him to do this – although he then said that such questions should be directed to Justice officials, not him. Spicer did a lot of referring.

Was Sessions involved? "That's something you should ask the Department of Justice," Spicer said.

Was Rosenstein's probe part of a larger review of the FBI? "That's, again, a question that you should ask the Department of Justice," he said.

What was the president's role? "Again, I have to get back to you on the tick-tock," he said.

What were the three occasions on which the president says Comey assured him that he was not under investigation? "I don't – we can follow – I can try, yeah," he said.

How long did the president deliberate? "I don't, I don't… I can look at the tick-tock. I know that he was presented with that today. I'm not sure what time," he said.

Why wasn't Comey given the news in a personal phone call? "I think we delivered it by hand and by email and that was – and I get it, but you asked me a question and that's the answer," he said.

Did Comey's testimony last week – which contained inaccuracies – influence the decision? "You'd have to ask the Department of Justice. They're the ones that made the recommendation," he said.

Why didn't the president do this months ago? "Again, I would refer you to the Department of Justice," he said.

Does he know about grand-jury subpoenas that have reportedly been issued in an investigation involving Michael Flynn, Trump's previous national security adviser? "I'm not – I'm not aware of any," he said.

Is it true that the president will meet on Wednesday with Russian diplomat Sergey Viktorovich Lavrov? "We'll see what the schedule says. I don't – I just – I've been a little tied up."

Spicer repeatedly batted down bipartisan calls that an independent prosecutor be assigned to handle the investigation into ties between Trump's campaign and Russian officials, saying that the current system is working just fine. CNN's Sara Murray noted that Trump has now fired Comey, who is leading the investigation, and Sessions has had to recuse himself.

As Murray continued to press him, Spicer told her: "Hold on, Sara, I get it, you're right there. You don't have to yell."

With Murray quieted, Spicer continued to explain why there's no need for a special prosecutor.

"There is clearly at this point no evidence of a reason to do that," Spicer said. "You have a system that's working."

As Spicer made his way toward the White House door, the swarm of reporters moved with him, shouting questions along the way: Why is the White House suddenly giving statements after pledging to not do so? Did Trump's bodyguard really deliver the message to the FBI? Can NBC get some one-on-one time?

Spicer walked with his head down. As he approached the door, aides warned reporters not to get too close. He then disappeared inside, enveloped by the warmly lit White House.

The Washington Post's Robert Costa contributed to this report.