After meeting with Trump, Russian foreign minister again denies interference in US election 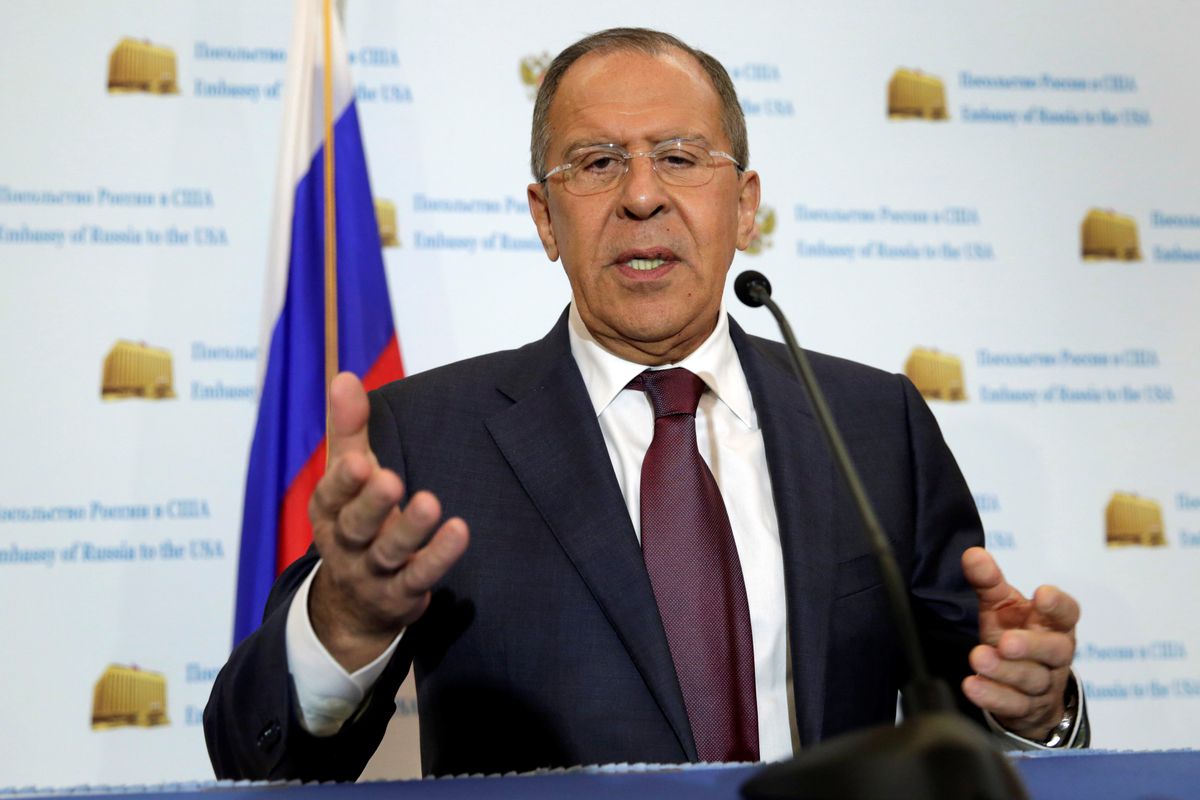 Russian Foreign Minister Sergey Lavrov speaks at his news conference at the Russian Embassy in Washington, U.S., May 10, 2017. REUTERS/Yuri Gripas

Russian Foreign Minister Sergey Lavrov speaks at his news conference at the Russian Embassy in Washington, U.S., May 10, 2017. REUTERS/Yuri Gripas

Russian Foreign Minister Sergei Lavrov said Wednesday that no evidence exists linking Russia to hacked emails during last year's election and that the issue never arose during his meeting in the morning with President Donald Trump.

Speaking to reporters at the Russian Embassy after his White House talks with Trump and Secretary of State Rex Tillerson, Lavrov showed his irritation over repeated questions about Moscow's alleged interference in the presidential elections.

"I never thought I'd have to answer such questions, particularly in the United States given your highly developed democratic system," he said, according to a simultaneous translation of his remarks into English.

Lavrov frequently disparaged the suspicions of Russian election intrusion, which U.S. intelligence agencies have all pinned on Moscow. He at turns characterized the allegations as "noise" and a "humiliation" for the American people.

"We are monitoring what is going on here concerning Russia and its alleged 'decisive role' in your domestic policy," he said, according to a quote reported in Tass, which added a remark phrased less colorfully by the embassy interpreter. "We have been discussing specific issues but never touched upon this bacchanalia."

Lavrov's visit to Washington comes as Russia is seeking U.S. backing for an agreement it made with Iran and Turkey for a cease-fire in Syria and the creation of four "de-escalation zones."

By chance, he arrived as the White House is coming under political fire for Trump's decision to fire FBI Director James Comey on Tuesday night. The FBI has been conducting an investigation into alleged ties between Russia and the Trump campaign.

Before a separate, early-morning meeting with Tillerson at the State Department, Lavrov professed mock surprise when asked whether Comey getting the boot had cast a shadow over his visit.

Lavrov then jerked his head back in a dismissive gesture and walked away, shaking his head.

In Moscow, the reaction to Comey's dismissal also has been acerbic.

"A Comical Firing" was the headline on a the Comey story on Russia's pro-Kremlin NTV news channel. In the report, Konstantin Kosyachev, a senior Russian legislator, said that the FBI director was let go "because he's not supposed to act like he's the president."

The official RIA-Novosti news agency, in a commentary titled "The Man Who Knew Too Much," compared Comey unfavorably to Anastas Mikoyan, the Soviet statesman who managed to serve in high office for three Soviet dictators, Stalin, Khruschev and Brezhnev.

"They used to say that he doesn't need an umbrella, he can walk in between the raindrops," it said. "Judging from everything, James Comey tried to play that trick. It didn't work."

And Russian President Vladimir Putin seemed to smirk when a CBS Evening News reporter caught up with him at a hockey exhibition. Asked how Comey's firing would affect U.S.-Russia relations, Putin said, "Don't be angry with me, but your question looks very funny to me. We have nothing to do with that."

The main purpose of Lavrov's visit to Washington was to discuss the ongoing conflicts in Syria and Ukraine.

In a statement after the meeting, the White House said Trump had "emphasized the need to work together to end the conflict in Syria," particularly urging Russia to "rein in" the Bashar Assad regime, Iran and Iranian allies. He also urged Russia to implement the Minsk accord reached in 2014 in an attempt to end fighting in Ukraine and "raised the possibility of broader cooperation on resolving conflicts in the Middle East and elsewhere," the statement said.

The White House barred press from the meeting. But Lavrov's delegation got Tass in to take photos of the closed-door meeting.One of the photos showed Trump shaking hands with Sergei Kislyak, the Russian ambassador who is a key figure in the FBI's Russia's probe.

"Unfortunately, the previous administration bent over backwards to undermine the solid foundation of our relations," he said. "We have to start from a very low level."

Lavrov also said he wants the United States to give back to Russia two vacation properties it seized outside New York and Washington last year after the Obama administration said they were linked to spying.

Lavrov and Tillerson have said relations between Moscow and Russia are worse than they have been in decades. This is the third meeting between the new U.S. diplomat, who had no experience in foreign policy before becoming secretary of state three months ago, and Lavrov, who has been representing his country for more than four decades.

Tillerson, who met with Lavrov last month in Moscow in a bid to smooth out differences, said he wanted to express "my appreciation for his making the trip to Washington so we can continue our dialogue and exchange of views that began in Moscow with the dialogue he hosted on a very broad range of topics."

After the White House meeting, Tillerson and Lavrov were expected to depart for Alaska to attend a meeting of the Arctic Council, which the United States has chaired for the past two years.