Trump budget would slash spending, reshape assistance to the poor 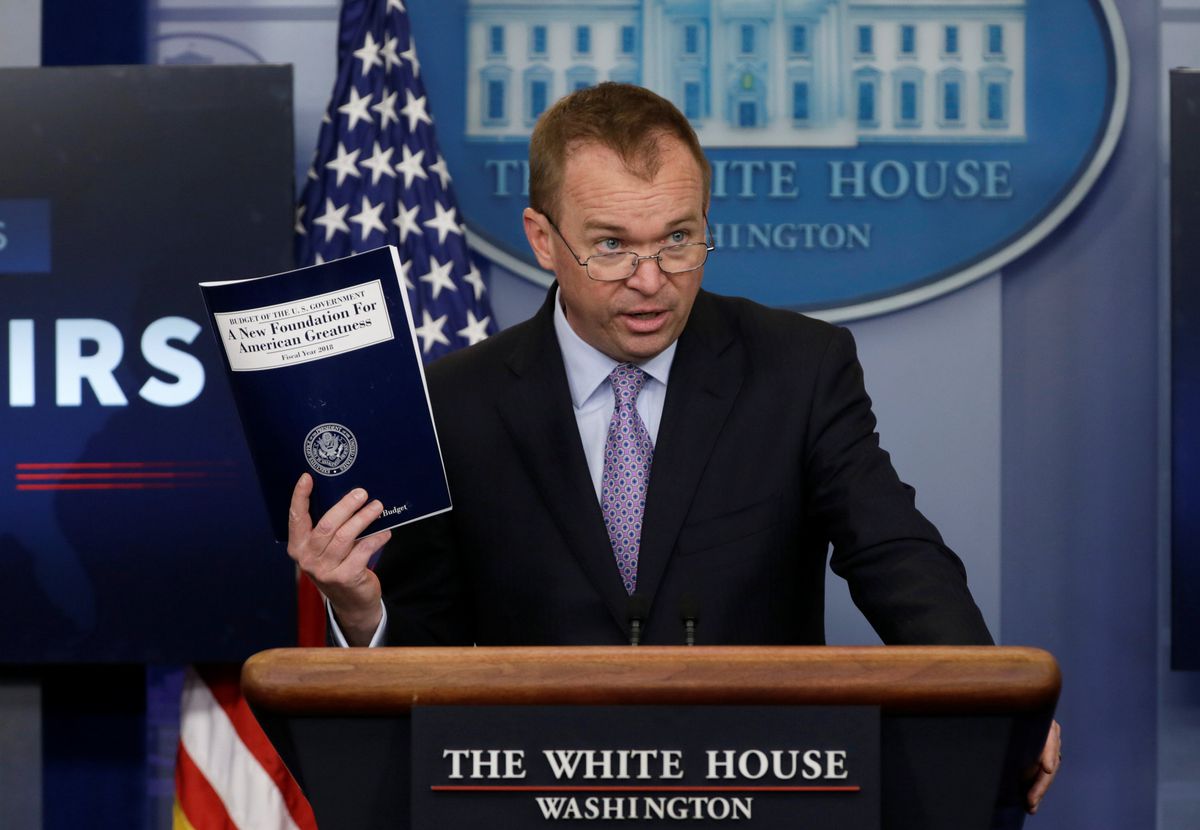 WASHINGTON — President Donald Trump on Tuesday proposed dramatic changes to the role of the federal government, issuing a budget plan that culls back or eliminates numerous programs that the White House says are a waste of money or create too much dependency.

Some of these programs – including Medicaid and the modern version of food stamps – provide benefits to up to a fifth of all Americans, and the breadth of the cuts has rattled lawmakers from both parties who have warned that the reductions go too far.

For Trump, his $4.094 trillion budget proposal for the fiscal year that begins in October marks his first exercise is spelling out – in great detail – how he wants the government to change. White House Office of Management and Budget Director Mick Mulvaney called the plan a "Taxpayer First Budget," and he said they worked to jettison any spending that they felt they could not defend. In total, this meant roughly $3.6 trillion in cuts over the next 10 years.

These cuts, White House officials said, would usher in a sustained period of strong economic growth that would grow wealth, create more jobs, and reduce poverty.

"I think what Trumponomics is and what this budget is a part of is an effort to get to sustained 3 percent economic growth in this country again," Mulvaney said in a briefing with reporters.

But getting there would require a lot of red ink.

Details of the budget circulating in Washington on Monday drew outrage from Democrats and a mix of anxiety and praise from Republicans, illustrating the political minefield that policymakers face as they debate whether to turn the proposals into law.

Mick Mulvaney, director of the Office of Management and Budget, said the spending plan, titled "A New Foundation for American Greatness," is focused on protecting taxpayer money and cutting spending on programs that are ineffective or encourage people not to work.

He singled out the Supplemental Nutrition Assistance Program (SNAP), the modern version of food stamps, which grew rapidly after the financial crisis and had 44 million beneficiaries in 2016.

Democrats and anti-poverty advocates decried the changes, saying that Trump is seeking to strip support for the most vulnerable Americans while cutting taxes for the wealthiest.

"This would pull the rug out from so many Americans who need help: those suffering from opioid and heroin addiction, people in nursing homes and their families who care for them, the elderly, the disabled and children," Senate Minority Leader Charles Schumer, D-N.Y., said.

The proposed budget refocuses decades of U.S. spending – both foreign and domestic – to reflect Trump's belief that too much taxpayer money is simply given away.

For example, the president will propose changing foreign aid programs in a way that no longer delivers much of the money as grants and instead extends loans to foreign governments that must be repaid, Mulvaney said. Special exemptions would be made for Israel and Egypt.

The budget would also impose a 2 percent cut to all spending that must be approved by Congress each year for the next decade, excluding military programs. Spending for these programs tends to increase each year under Democrats and Republicans. Separately, the budget would eliminate all federal support for Planned Parenthood, the health-care provider that conservatives often attack.

In writing the budget, White House officials were forced to walk a tightrope.

Trump insisted that they could not cut retirement benefits for Social Security or health benefits for Medicare, two of the most expensive parts of the federal budget. White House officials also were committed to protecting military spending.

To preserve those items and eliminate the budget deficit over 10 years, officials had to deliver major cuts across the rest of the budget. The budget also relies heavily on assumptions that economic growth will soar under tax cuts and regulatory reductions that Trump has promised to deliver.

"You have to understand that for Trump, growth is populism, so he doesn't see this as a budget of cuts but a budget for growth," said Sam Nunberg, a longtime Trump associate who worked on his campaign in 2015. "What he's trying to do is work with Congress, where a lot of these ideas started, and put something together."

The budget, in its deeply conservative framework, risks alarming some of the president's supporters.

"I'm not sure the White House understands who their base is," Patrick H. Caddell, a veteran strategist who works with Breitbart News, said. He cited Democrats and working-class independents as key parts of Trump's political coalition. "Where's the outreach to them?" he asked.

But a White House official, who was not authorized to speak publicly, said Trump saw the shrinking of the "welfare state" as a necessary component of his nationalist, working-class appeal and part of his pledge to "drain the swamp."

Meanwhile, Trump's critics in the GOP shrugged at the president's overture to the budget-cutting wing of the party.

One of the biggest surprises in the budget is that defense spending remains relatively flat, after months of promises from Trump that he would completely rebuild the military.

The plan proposes a $43 billion increase in defense spending next year, but in subsequent years the budget is almost identical to what it would be without any changes. A White House official said that is because the military is still planning spending priorities for those years and that the budget would eventually change.

For anti-poverty programs, the White House proposes shifting some of the financial costs to states, giving them a financial stake in deciding whether to permit people to receive benefits.

On Medicaid, Trump wants states to choose between agreeing to a cap based on how many people are enrolled or a "block grant" structure that delivers funds to states and gives them more flexibility in how it is spent.

A number of key Republicans have expressed concern about the approach.

New Jersey Gov. Chris Christie, R, a key Trump supporter during the campaign, said his state is a "state that has a lot of people who utilize Medicaid." Medicaid cuts of the scale Trump was proposing had him "concerned," Christie said.

For SNAP, the White House is proposing changes that would force states to pay a portion of the benefits, which could put more pressure on them to prevent people from enrolling.

On CHIP, the White House would propose eliminating a 23 percentage point increase in federal contributions and would cap other assistance to the program, something the White House argues would make sure it helps only the neediest children.

But Jared Bernstein, who served as a top economic adviser to former vice president Joe Biden, called the scale of Trump's cuts "otherworldly." He said that even if Senate Republicans are able to scale back the cuts, they could still have a major impact on government programs.

"At the end of the day, they may settle for something that's huge and egregious but less than the cosmic number they are throwing around" in the budget proposal, he said.

The budget would increase spending on immigration control and border security and provide another $200 billion for infrastructure projects over 10 years. It would allocate $1.6 billion for the creation of a wall along the U.S. border with Mexico.

"We are absolutely dead serious about the wall," Mulvaney said Tuesday.

Many of the programs targeted by Trump's budget provide health, housing or other assistance to millions of Americans, including a large number of Trump voters.

There are 74.6 million Americans who receive Medicaid or CHIP, according to the Kaiser Family Foundation. Almost 11 million receive Social Security Disability Insurance payments, and 8.3 million receive Supplemental Security Income, a small cash benefit for the poor and those with disabilities.

Many of these programs have rigorous screening mechanisms, and it is very difficult for people who are unemployed, childless and able to work to collect benefits for long. But Trump administration officials believe the rules should be even stricter, with the goal of pushing more people back into the workforce so that the economy can strengthen and create more growth.

Former House speaker Newt Gingrich, who engaged in numerous budget battles during the Clinton administration, said that Trump must steel himself against attacks and emphasize his insistence on how much he "values work."

"If the Trump people sell it as genuine reform that's getting rid of people who should be at work or are cheating, getting rid of redundancy and making the bureaucracy dramatically leaner, then it will be successful," Gingrich said. "People actually resent neighbors who are getting goodies they haven't worked for. It's going to be a huge fight. How this plays out will depend on how he handles it."