In Washington state, a natural disaster unfolds in slow motion

UNION GAP, Wash. — Jackie Rodriguez drives by the crack at about 9:30 p.m. most nights, as she heads home from her evening classes in dental hygienics, past the big spotlights aimed up at the mountain. She says it spooks her just about every time.

"You know that queasy feeling you get in your stomach?" she said.

The fissure was first spotted in October on Rattlesnake Ridge in south central Washington state, overlooking Interstate 82 and the Yakima River. Since then, a 20-acre chunk of mountainside — roughly 4 million cubic yards of rock, enough to fill 25 football stadiums to the top of the bleachers, eight stories up — has been sliding downhill. Geologists can measure its current speed — about 2 1/2 inches a day — but they cannot say for certain when, or if, it might accelerate into a catastrophe. And they are powerless to stop it.

"The mountain is moving, and at some point this slide will happen — it's just a matter of when," said Arlene Fisher-Maurer, the city manager in Union Gap, just north of the ridge.

"So we wait and see and prepare," said Fisher-Maurer, who keeps a police scanner on her desk for alerts. "The preparation has been key, and I think it's going to do us well."

The usual course of events when nature comes unhinged is for researchers and responders to look back in time, trying to understand what happened, as they assess and address the damage done. Here it is precisely the opposite: They are looking forward in time at a disaster in waiting, in which all is still potential and nothing is certain.

The worst-case scenarios — considered unlikely but possible — have the slide breaking loose suddenly and roaring down toward the Yakima River, blocking the channel and flooding the valley, or burying the interstate that runs along the river, carrying 30,000 vehicles a day. Either would mean big trouble for a rich agricultural district where apples and hops are king, about 2 1/2 hours' drive from Seattle.

By giving scientists, officials and the people who live nearby so much time to stew over what could be happening, the slow-motion nature of the slide — at least so far — has already created tensions.

About 75 people have been evacuated from nearby houses that may or may not ever be damaged. The local road at the foot of the hillside has been closed. Irrigation canal operators stand ready to open dams and take water from the river if it is blocked by a rock slide. Alternate highway routes have been mapped out, in case the interstate becomes impassable. 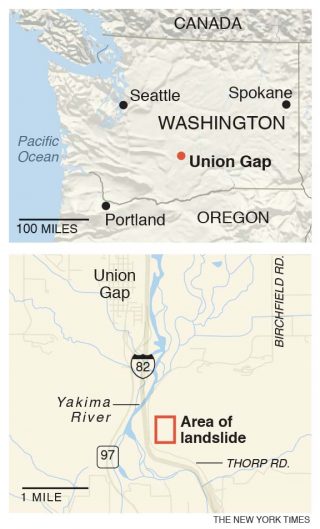 Current projections, based on dozens of motion sensors that have been installed on the ridge, suggest that the collapse is most likely to happen sometime in late February.

"In a lot of disasters, you don't have as much warning as months — hardly any," said Jeff Emmons, the emergency management director for Yakima County. "It's a unique thing."

In the last few weeks, the main mass of rock has been moving toward a gravel quarry at the base of the ridge. The company that runs the quarry has stopped operations and has voluntarily offered to put up evacuated residents in nearby hotels for five weeks at its own expense, though the cause of the crack has yet to be formally determined.

Some things, though, are clear. The slide is occurring in a rumpled layer cake of volcanic rock, or basalt, laid down by eruptions that began about 17 million years ago, interspersed with thin deposits of silt and other sediments. Over time, the layers have folded upward, forming the ridge, and the topmost basalt layer is now sliding over the sedimentary layer beneath it.

Many landslides are caused by infiltration of rainwater or groundwater, but geologists think that water is not involved in this case at all, just gravity.

That makes Rattlesnake Ridge a sharp contrast to the recent mudslides in California, which were caused by rain and erosion on lands loosened by fires — at least 21 people are dead, with many more still missing — or the devastating Oso landslide in northern Washington state nearly four years ago, which killed 43 people, after weeks of heavy rain.

Still, all these events reflect the restlessness of the earth and nature that is part of Pacific Rim life. Even the name of the town, Union Gap, is a testament to natural violence: It refers to the huge gash in the ridgeline carved thousands of years ago by a colossal flood from ancient Lake Missoula. That lake once covered much of Montana, and when the Ice Age dam that constrained it broke apart, its waters left scars across the northwest as they roared toward the Pacific Ocean.

Emmons says he gets updates every day from state geologists and other experts about the odds and percentage predictions of the slide's likely path. And then he tosses those odds out the window.

"I can't rely on percentages, because in my world, 1 percent is still a chance," he said. "I don't feel comfortable banking on a percent number for public safety, or life safety. In my view, everything is possible."

The uncertainty has made life harder for the people who have been evacuated, like Antonio Martinez, 42, a construction worker. He and his wife, Irma, and their four children got out last month, along with all their dogs, chickens and turkeys. He said he would like to return, but he wonders whether he would feel safe there, even if the slide comes down a different way and spares his house.

"I love my place, I raised my kids there, I've spent 15 years of my life there," he said in the hotel room where his family is staying. (Their animals have been taken in for safekeeping and care by neighbors who have not evacuated.)

Perhaps paradoxically, one of Emmons' nightmares is that the mountain will go on creeping, molasses-style, for so long that people grow tired of worrying about it and stop paying attention to advisories and alerts, putting them at greater risk when the break does come.

"If this goes on for months, it's going to become old news," he said.

In the meantime, he said, he is trying to use Rattlesnake Ridge as a teaching opportunity, urging people here and elsewhere in the country to think ahead about preparedness — where the flood plains and slide zones and fire hazards are near their homes, for example, as well as what their insurance will and will not cover — and then to talk about escape routes and communication plans so that family members know how to find one another when disaster strikes.

Geologists say the data they are getting from the mountain is astonishing in its detail. There is an array of GPS monitors and a system of reflectors along the ridge, and lasers are flashed across the valley at the slide area every half-hour. The reflection of the laser light can determine the slide's position within half an inch.

The structure and dynamics within the mountainside, though, are not measurable now. It is not possible to dig or drill for core samples to reveal the inner workings in a moving mass, because the motion would snap off a drill head in short order.

Stephen Slaughter, a geologist and landslide hazards program manager for the Washington state Department of Natural Resources, said one of his worries was that the mountain would grind to a halt but still be fractured and possibly unstable.

"It could totally do that," he said. "It could easily just stop moving, and then we're sort of at, 'Now what?'"

Alaska’s flu season is already the worst in years, and it’s far from over