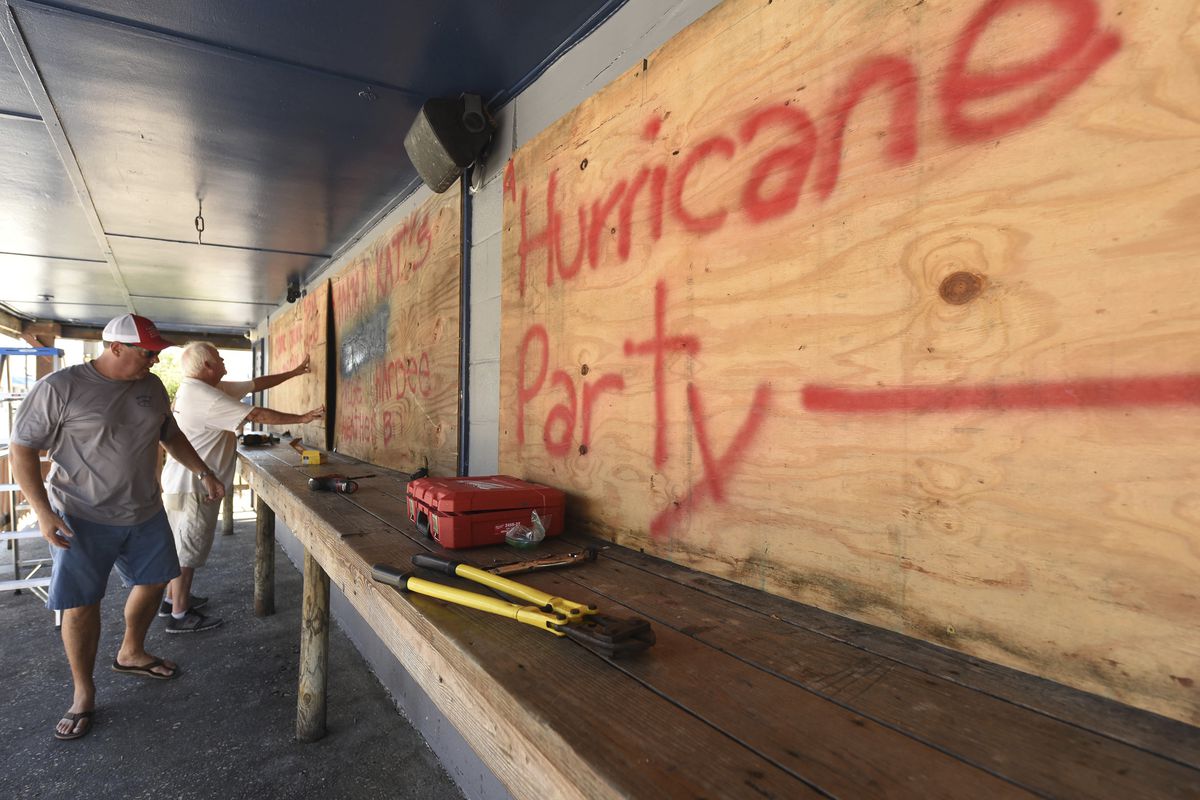 Jim Carter and Rob Quinn board up Lagerheads Tavern in Wrightsville Beach, N.C. as they prepare for Hurricane Florence Monday, Sept. 10, 2018. Hurricane Florence now a category 3 hurricane is expected to make land fall somewhere along the North Carolina coastline towards the end of the week. (Ken Blevins /The Star-News via AP)

Jim Carter and Rob Quinn board up Lagerheads Tavern in Wrightsville Beach, N.C. as they prepare for Hurricane Florence Monday, Sept. 10, 2018. Hurricane Florence now a category 3 hurricane is expected to make land fall somewhere along the North Carolina coastline towards the end of the week. (Ken Blevins /The Star-News via AP)

While some said they planned to stay put despite hurricane watches and warnings that include the homes of more than 5.4 million people on the East Coast, many weren't taking any chances.

Steady streams of vehicles full of people and belongings flowed inland Tuesday as Gov. Roy Cooper tried to convince everyone on North Carolina's coast to flee.

"The waves and the wind this storm may bring is nothing like you've ever seen. Even if you've ridden out storms before, this one is different. Don't bet your life on riding out a monster," he said.

Forecasters said hurricane-force winds will be blowing ashore early Friday as Florence stalls along the coast before dumping a torrential 1 to 2½ feet of rain. Flooding well inland could wreak environmental havoc by washing over industrial waste sites and hog farms.

Up to a foot of rain is now predicted places in the southern Appalachian mountains as projections shifted the storm's eventual path southward. "This rainfall would produce catastrophic flash flooding and significant river flooding," forecasters said Wednesday.

President Donald Trump declared states of emergency for North and South Carolina and Virginia, opening the way for federal aid. He said the federal government is “absolutely, totally prepared” for Florence.

All three states ordered mass evacuations along the coast. But getting out of harm's way has proved difficult.

American and Southwest Airlines were among the carriers canceling flights to and from the hurricane zone starting Wednesday. Charleston International Airport in South Carolina tweeted that it expected to close runways by midnight Wednesday.

Michelle Stober loaded up valuables on Tuesday at her home on Wrightsville Beach to drive back to her primary residence in Cary, North Carolina. Finding fuel for the journey was tough.

"This morning I drove around for an hour looking for gas in Cary. Everyone was sold out," she said.

Florence is so wide that a life-threatening storm surge was being pushed 300 miles ahead of its eye, and so wet that a swath from South Carolina to Ohio and Pennsylvania could get deluged.

People across the region rushed to buy bottled water and other supplies, board up their homes, pull their boats out of the water and get out of town.

Long lines formed at service stations, and some started running out of gas as far west as Raleigh, with bright yellow bags, signs or rags placed over the pumps to show they were out of order. Some store shelves were picked clean.

"There's no water. There's no juices. There's no canned goods," Kristin Harrington said as she shopped at a Walmart in Wilmington.

People weren't the only ones evacuating. Eight dogs and 18 cats from a shelter in Norfolk, Virginia, were sent to two shelters in Washington to make room for pets expected to be displaced by the hurricane. Wild horses on the barrier islands were expected to survive.

At 8 a.m., Florence had top sustained winds of 130 mph and was centered 530 miles southeast of Cape Fear, North Carolina, approaching the coast at 17 mph. Already a potentially catastrophic Category 4 hurricane, it was moving over warmer water and expected to intensify to near Category 5, which means winds of 157 mph or higher.

Florence is the most dangerous of three tropical systems in the Atlantic. Tropical Storm Isaac was east of the Lesser Antilles and expected to pass south of Puerto Rico, Hispaniola and Cuba, while Hurricane Helene was moving northward away from land. Forecasters also were tracking two other disturbances.

The coastal surge from Florence could leave the eastern tip of North Carolina under more than 9 feet of water in spots, projections showed. The Navy, Air Force and Army were moving ships and aircraft out of harm’s way. Thousands of Marines and their families evacuated from Camp Lejeune, leaving the rest to dig in ahead of what could be a direct hit.

Federal officials begged residents to put together emergency kits and have a plan on where to go.

Forecasters said parts of North Carolina could get 20 inches of rain, if not more, with as much as 10 inches elsewhere in the state and in Virginia, parts of Maryland and Washington, D.C.

One trusted computer model, the European simulation, predicted more than 45 inches in parts of North Carolina. A year ago, people would have laughed off such a forecast, but the European model was accurate in predicting 60 inches for Hurricane Harvey in the Houston area, so “you start to wonder what these models know that we don’t,” University of Miami hurricane expert Brian McNoldy said.

Rain measured in feet is "looking likely," he said.

North Carolina's governor issued what he called a first-of-its-kind mandatory evacuation order for all of North Carolina's fragile barrier islands. Typically, local governments in the state make the call on evacuations.

"We've seen nor'easters and we've seen hurricanes before," Cooper said, "but this one is different."

Despite all that, 65-year-old Liz Browning Fox plans to ride the storm out in the Outer Banks village of Buxton, North Carolina, despite a mandatory evacuation order. Her 88-year-old mother refused to evacuate and will stay with her.

"Everyone who is staying here is either a real old-timer, someone who doesn't know where would be better, or someone involved in emergency operations one way or another," said Fox.