Analysis: Under siege, Trump propels the government and markets into crisis 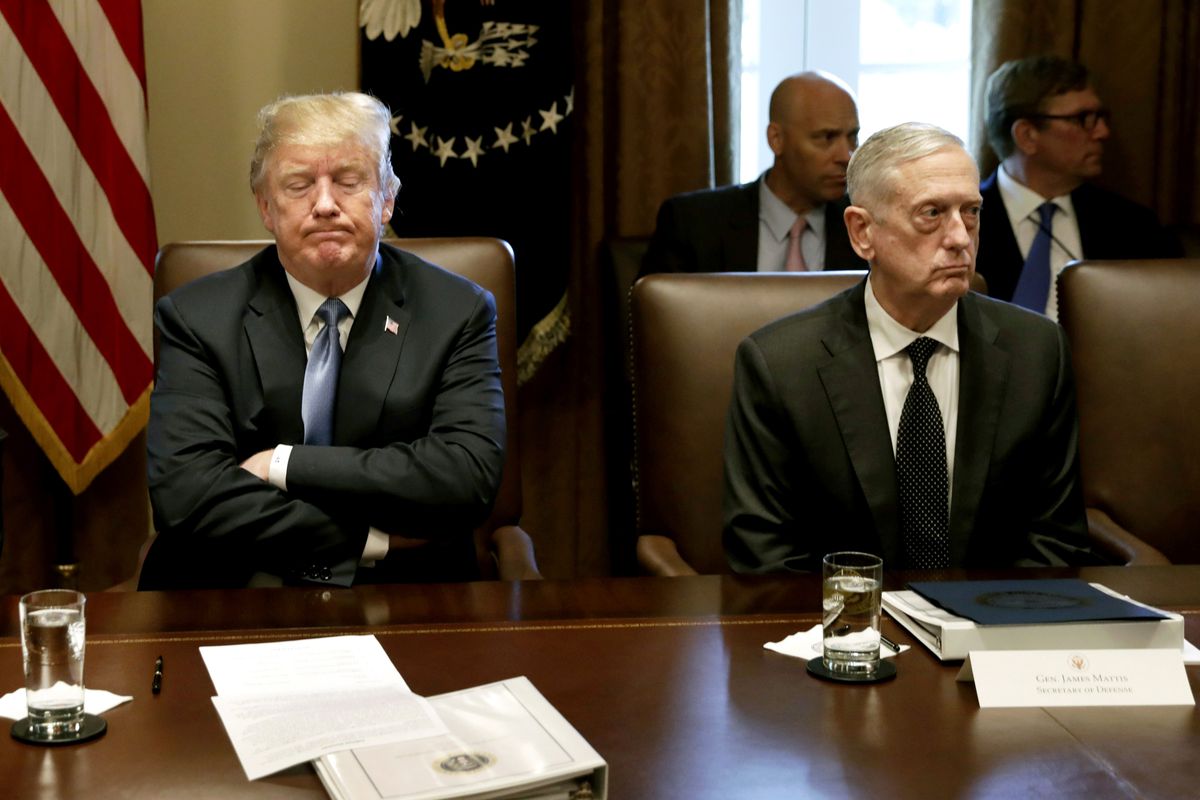 President Donald Trump, left, pauses while speaking as James Mattis, secretary of defense, listens during a Cabinet meeting at the White House in Washington on June 21, 2018. Bloomberg photo by Yuri Gripas.

President Donald Trump, left, pauses while speaking as James Mattis, secretary of defense, listens during a Cabinet meeting at the White House in Washington on June 21, 2018. Bloomberg photo by Yuri Gripas.

WASHINGTON - President Donald Trump began Thursday under siege, listening to howls of indignation from conservatives over his border wall and thrusting the government toward a shutdown. He ended it by announcing the exit of the man U.S. allies see as the last guardrail against the president’s erratic behavior: Defense Secretary Jim Mattis, whose resignation letter was a scathing rebuke of Trump’s worldview.

At perhaps the most fragile moment of his presidency - and vulnerable to convulsions on the political right - Trump single-handedly propelled the U.S. government into crisis and sent markets tumbling with his gambits this week to salvage signature campaign promises.

The president's decisions and conduct have led to a fracturing of Trump's coalition. Hawks condemned his sudden decision to withdraw U.S. troops from Syria. Conservatives called him a "gutless president" and questioned whether he would ever build a wall. Political friends began privately questioning whether Trump needed to be reined in.

After campaigning on shrinking America's footprint in overseas wars, Trump abruptly declared Wednesday that he was withdrawing U.S. troops from Syria, a move Mattis and other advisers counseled against. And officials said Thursday that Trump is preparing to send thousands of troops home from Afghanistan as well.

The president also issued an ultimatum to Congress to fund construction of his promised U.S.-Mexico border wall, a move poised to result in a government shutdown just before Christmas. Trump and his aides had signaled tacit support for a short-term spending compromise that would avert the shutdown, but the president abruptly changed course after absorbing a deluge of criticism from some of his most high-profile loyalists.

Leon Panetta, who served as former defense secretary, CIA director and White House chief of staff for Democratic presidents, said, "We're in a constant state of chaos right now in this country." He added, "While it may satisfy [Trump's] need for attention, it's raising hell with the country."

Panetta said the resignation of Mattis is a singular moment and his letter, which underscores how Mattis sees Trump's approach as misguided, "puts the security of the nation right now at some degree of risk."

Trump has been isolated in bunker mode in recent weeks as political and personal crises mount, according to interviews with 27 current and former White House officials, Republican lawmakers and outside advisers to the president, some of whom spoke on the condition of anonymity to offer candid assessments.

"There's going to be an intervention," one former senior administration official said speculatively. "Jim Mattis just sent a shot across the bow. He's the most credible member of the administration by five grades of magnitude. He's the steady, safe set of hands. And this letter is brutal. He quit because of the madness."

In his resignation letter, Mattis wrote, "My views on treating allies with respect and also being clear-eyed about malign actors and strategic competitors are strongly held and informed by over four decades of immersion in these issues . . . Because you have the right to a Secretary of Defense whose views are better aligned with yours on these and other subjects, I believe it is right for me to step down from my position."

Although Trump's relationship with Mattis has been rocky for months, the president spent the first part of Thursday focused on another fraying relationship: with his conservative base.

On Thursday, as criticism over his capitulation on the wall grew louder by the hour, Trump complained to friends and aides that he felt politically shackled. He had no plan, but was spoiling for a fight. By midday, the president picked one.

"I've made my position very clear: Any measure that funds the government must include border security. Has to," Trump said Thursday. He added that he had "no choice" but to act.

Trump's advisers acknowledged that the funding may not be secured in the end, but boasted that the spectacle would be remembered favorably by his base voters as proof of his mettle. A wall funding proposal was approved by the House late Thursday, but faced uncertain prospects in the Senate.

Senate Majority Leader Mitch McConnell, R-Ky., habitually careful in his approach to Trump, avoided strong-arming the president in their recent exchanges, knowing that urging him to stand down on the wall funding likely would only embolden him, according to two people familiar with the discussions. At every turn, McConnell confided to Trump that congressional efforts this month - from the passage of the farm bill to bipartisan criminal-justice reform - were a string of victories for him, the people said.

Thanks to McConnell's soothing, there was cautious optimism that the president would eventually sign a funding bill. "McConnell has a lot to do with it, of course. They talk a lot," Rep. Harold Rogers, R-Ky., said. "It's smart to save the fight for another day."

House Speaker Paul Ryan, R-Wis., - busy this week bidding farewell to Congress after two decades in office - followed McConnell's playbook, pointing out how Trump would be able to battle for wall funding in the new year, a person close to him said.

Both Ryan and House Majority Leader Kevin McCarthy, R-Calif., told Trump last week that they could not pass a spending bill with $5 billion for wall construction, and McConnell was told by the White House that Trump would sign a short-term bill without it, according to two people familiar with the conversations.

But on Fox News Channel and across conservative media, there was a brewing rebellion. Prominent voices urged Trump to hold firm on his wall money and warned that caving would jeopardize his reelection.

Rush Limbaugh dismissed the compromise bill on his radio program as "Trump gets nothing and the Democrats get everything." Another firebrand, Ann Coulter, published a column titled, "Gutless President in Wall-less Country." Trump even found resistance on the couch of his favorite show, "Fox & Friends," where reliable Trump-boosting host Brian Kilmeade chided him on the air Thursday.

The president was paying attention. He promptly unfollowed Coulter on Twitter. And he pecked out a series of defensive tweets blaming congressional leaders for not funding the wall, while also staking a defensive posture. He suggested that a massive wall may not be necessary in its entirety because the border already is "tight" thanks to the work of Border Patrol agents and troops.

"One of the things he's most vulnerable to is mockery and mockery by his own supporters," said Mark Krikorian, a leading anti-immigration activist.

Members of the conservative House Freedom Caucus joined in the rebellion. During House votes on Wednesday evening, caucus chair Rep. Mark Meadows, R-N.C., and other members refused to budge and held court with reporters, railing against the Republican leadership and warning Trump that he was being led astray.

At a Thursday Oval Office meeting with Ryan and McCarthy, Trump was calm and did not yell, but was resolute and "dug in on what he wants," said a Republican official briefed on the discussion.

Trump spent six to seven minutes in the meeting with Ryan and McCarthy talking about "steel slats" and saying that the term was preferable to calling the proposed construction a "wall," as the president has done for more than three years.

The administration drama comes at an especially perilous juncture for Trump, following his thumping at the polls in November's midterm elections. Democrats are preparing to take control of the House in January and to use their subpoena power to investigate Trump's finances and conduct in office, as well as alleged corruption in the administration.

Meanwhile, Republicans in their last gasp of unified government are divided. A band of hard-line conservative lawmakers voted against Trump's prison reform legislation, which passed the House and Senate with bipartisan support and is expected to be signed by the president Friday. And many foreign policy hawks, including Sen. Lindsey Graham, R-S.C., a Trump confidant, sharply criticized Trump's decision Wednesday to withdraw U.S. troops from Syria.

Inside the Oval Office on Thursday, Trump was in what one Republican close to the White House described as "a tailspin," acting "totally irrationally" and "flipping out" over criticisms in the media.

Even as aides argued to him that protesting over wall funding could deprive government workers paychecks over Christmas, Trump warned in private conversations with Republican lawmakers that they all would get "crushed" if they did not get the wall built.

Trump vented to his advisers that signing the short-term spending bill without wall money would make him look weak and make his base voters think he broke a campaign promise. He also complained that he did not have sufficient bargaining leverage with Congress and blamed senior aides - including White House legislative affairs director Shahira Knight - for not presenting him with better options.

"He's legitimately saying, 'This is ridiculous. Why would I sign this?'" said American Conservative Union Chairman Matt Schlapp, whose wife, Mercedes Schlapp, is a senior White House staffer. "If you're the outsider, you don't want to go along with the same old stupid rules. When he does that, he doesn't look like an outsider."

Marc Short, Trump's former White House legislative affairs director, said, "He feels he made a promise to voters that he would build the wall. There is a realization that with Congress changing hands, that the challenge of getting funding for the wall only gets larger."

Trump's pin-balling conduct - veering from a promise of a shutdown to moving toward a deal, and then changing his mind - has vexed members of his own party. Many Republican lawmakers said they sense that Trump is adjusting uneasily to the dynamics of soon-to-be divided government and lashing out to reclaim some of his dominance over the congressional agenda.

“Having Mattis there gave all of us a great deal more comfort than we have now,” retiring Sen. Jeff Flake, R-Ariz., said. “Chaos has kind of been the norm but it seems to have been heightened. Sometimes you think it’s got to settle, and then another thing happens.”