On patrol with Washington’s plastic-straw cop 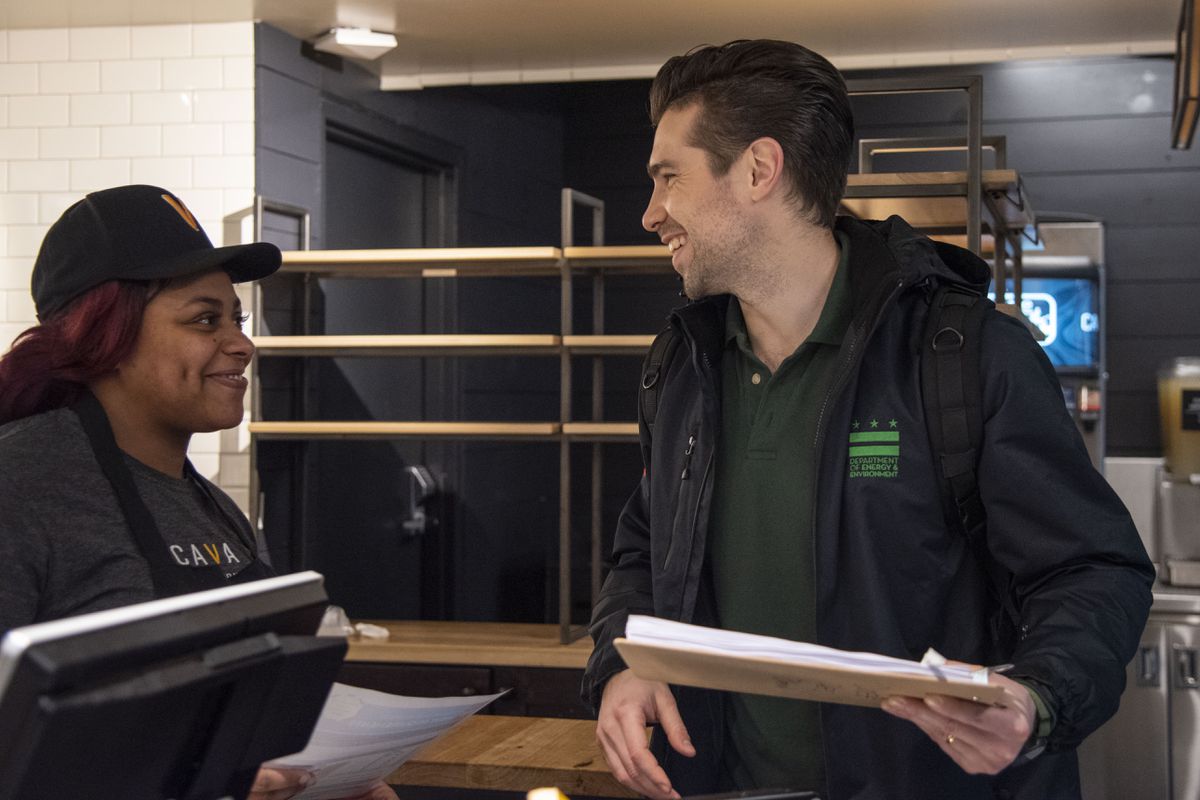 Zach Rybarczyk, who works for Washington's Department of Energy and Environment, inspects restaurants in Union Station on Jan. 8, 2019, to see if they are still using plastic straws after the city's ban went into effect this year. Cava passed its inspection. Washington Post photo by Calla Kessler

Zach Rybarczyk, who works for Washington's Department of Energy and Environment, inspects restaurants in Union Station on Jan. 8, 2019, to see if they are still using plastic straws after the city's ban went into effect this year. Cava passed its inspection. Washington Post photo by Calla Kessler

Past Auntie Anne's, past Johnny Rockets. At Lotus Express, a Chinese food joint, Rybarczyk peeled the wrapper from a red straw and bent the end - the telltale giveaway.

Washington has become the latest city in a nationwide movement to ban plastic straws, and it's up to Rybarczyk, an inspector for the D.C. Department of Energy and Environment, to enforce the new law.

The straw cop left the rattled cashier at Lotus Express with a warning that if the store was still using plastic straws by July, when a grace period expires, it could be fined up to $800.

Nine years after the District instituted a nickel bag tax and three years after it banned plastic foam food containers, it has turned on plastic straws - the newest target of environmentalists trying to reduce millions of tons of plastic that ends up in trees, waterways and in the bellies of wildlife. The effort has been galvanized by a viral video of a sea turtle with a straw stuck in its nostril.

"It's pretty absurd the amount of resources we put into creating plastic materials that we are using for five minutes to an hour, and then never again," said Julie Lawson, director of D.C. Mayor Muriel E. Bowser's Office of the Clean City. "Single-use plastics are taking the same cultural place as tobacco where it's socially unacceptable."

Straws and the District have a long history; the modern drinking straw was born in Washington in 1888, when inventor Marvin Chester Stone received the first patent for an "artificial straw" made from paper and produced them in his factory on F Street NW.

Over the next century, the straw evolved from straight to bendable, from paper to plastic.

But the popularity of the plastic straw, and its inability to decompose, is proving to be its undoing.

City officials estimate that plastic straws make up less than 1 percent of the trash in the Anacostia and Potomac rivers. Still, they pose a problem. Their thin design makes them too small for most recycling machinery, so they end up in trash and ultimately in waterways. Volunteers collected 10,000 plastic straws during the 30th annual Potomac River Watershed Cleanupin April.

"Plastic pollution that ends up on the street is carried by rain water into storm drains and eventually into streams and rivers," Laura Cattell Noll of the Alice Ferguson Foundation, a local environmental group, told the D.C. Council. "In many cases, this storm water is untreated, leaving local waterways choked with plastic bags, Styrofoam, plastic bottles and plastic straws."

The plastics industry has been pushing for reduced use instead of a ban.

"We don't think the ban is the right approach because it ends up substituting one material for another," said Keith Christman, managing director of plastics markets for the American Chemistry Council, which represents plastics manufacturers. "What we need to do here is reduce waste and not take a straw when you don't need one."

The District is among at least 15 jurisdictions that have outlawed plastic straws, including Seattle, Monmouth Beach, N.J., and a string of coastal cities in southern Florida and California, including San Francisco. There are no statewide bans, although California requires restaurants to serve straws only at customers' request. An increasing number of corporations, including Starbucks, Marriott and American Airlines, are voluntarily phasing out plastic straws.

The effort in the District has been pushed along by Dan Simons, co-owner of the Farmers Restaurant Group.

Simons never stocked plastic straws at his seven restaurants, including the flagship Founding Farmers in Foggy Bottom, preferring bioplastic straws that are supposed to decompose.

But when he stuck a bioplastic straw in a container of salt water for six months and it didn't change, he was convinced that they, too, have drawbacks.

Last spring, Simons formed Our Last Straw, a coalition of D.C.-area restaurants, bars, hotels, event venues and organizations to lobby for an end to single-use plastic straws. He said it was relatively easy to persuade others to join.

"When you are really getting into discussions with people on this topic and you look at photos and videos about the amount of trash in the ocean, this is just so logical and obvious that human behavior needs to change," Simons said.

He argued that the added cost of alternatives to plastic could be offset if restaurants use less.

"If you spend twice as much but use half as many, the math is pretty simple," Simons said.

At Union Station during the first week of January, when the ban took effect, many dining spots on the main level had already switched to compostable straws. But in the basement food court, Rybarczyk drew blank stares from cashiers who had no idea about the ban.

At Lotus Express, the inspector, one of three dispatched by the city to check cafeterias, bars and restaurants, scribbled the restaurant's name on the paper sleeve of the plastic straw and tucked it into his back pocket, along with two others from scofflaw restaurants. He planned to later check whether they floated in water, another telltale sign of prohibited plastic.

"Obviously there will be some holdouts until July, when we start issuing fines. But it's most fair to give businesses a heads up," said Rybarczyk, who keeps a metal straw for his personal use in his backpack.

At Sakura Japan, Rybarczyk explained the new rules to a cashier as a man waiting for his lunch looked on in disgust.

"What, is this California now?" grumbled the customer, who declined to give his name. "All these laws are just spreading from California. Everything is getting taken away from us, man. This is so stupid."

In 2014, D.C. lawmakers banned disposable food service items that can't be recycled or composted, but the city's Department of Energy and Environment released guidance saying plastic straws were acceptable to use.

Bars and food establishments in the nation's capital have been replacing plastic with straws made from paper, hay, bamboo or cornstarch.

"Honestly, we have not heard one complaint," said Kathy Hollinger, who leads the Restaurant Association of Metropolitan Washington. "Our folks will tell us pretty quickly if there's a big impact on their bottom line, and we have not heard that with this issue."

At Blue Bottle Coffee in Union Station, manager Derek Henry assured Rybarczyk that the store has been using straws made of vegetable material for four years.

"Every product we give a guest is compostable. It's been one of our core values," Henry said, although he acknowledged the straws end up in the trash because Union Station doesn't offer composting.

Business is booming for manufacturers of straws made from eco-friendly alternatives to plastic.

Orders have gone up so much for Indiana-based Aardvark Straws - which has made paper straws for more than a decade - that there is a six-to-eight-week backlog, and the company needed to open a new manufacturing facility.

As New York City considers a plastic-straw ban, Aardvark Straws wants it to hold off until 2020.

"All these bans just started hitting at once," said David Rhodes, global business director for Aardvark. "The last thing we want to do is start a movement and be in a position that we can't meet the demand."

One challenge facing D.C. restaurants, bars and coffee shops: What to do with outlawed plastic straws?

On the first day the law took effect, a Starbucks store downtown threw away large bags filled with straws, a move that seemed to defeat the purpose of the ban.

The D.C. Department of Energy and Environment advises businesses to keep a small stock of plastic straws for customers with disabilities who need them, while returning the rest to a supplier or sending them to businesses in Maryland or Virginia.

The issue came up in Seattle when activists heralded a restaurant that voluntarily ditched plastic straws before the ban took effect - only to realize that restaurant just gave the straws to a bar across the street.

"It was a reminder to us to not use them all up and not just throw them out," said Dune Ives, the Seattle-based executive director of Lonely Whale, a nonprofit devoted to eliminating plastic straws. "If we are going to do the best possible job we can, we have to get these straws out of the waste stream."

Ives has been collecting straws from businesses and has thousands piling up in her basement. She plans to ship them to a Netherlands company that makes furniture out of plastic.

In the District, Simons wants Our Last Straw to act as a repository for plastic straws from other businesses. He hopes to cut a deal with a recycling facility to accept a large shipment of straws at once, avoiding the problems of thin ones being lost in equipment during material sorting.

"I certainly don't want to see them go in the trash," Simons said.

Some conservatives and restaurant-goers say it's heavy-handed to target plastic straws when they aren't a leading source of pollution.

“Soon, it will be Our Last Plastic Fork,” Simons said. “It’s really an item-by-item, single-use plastic reduction and replacement strategy.”