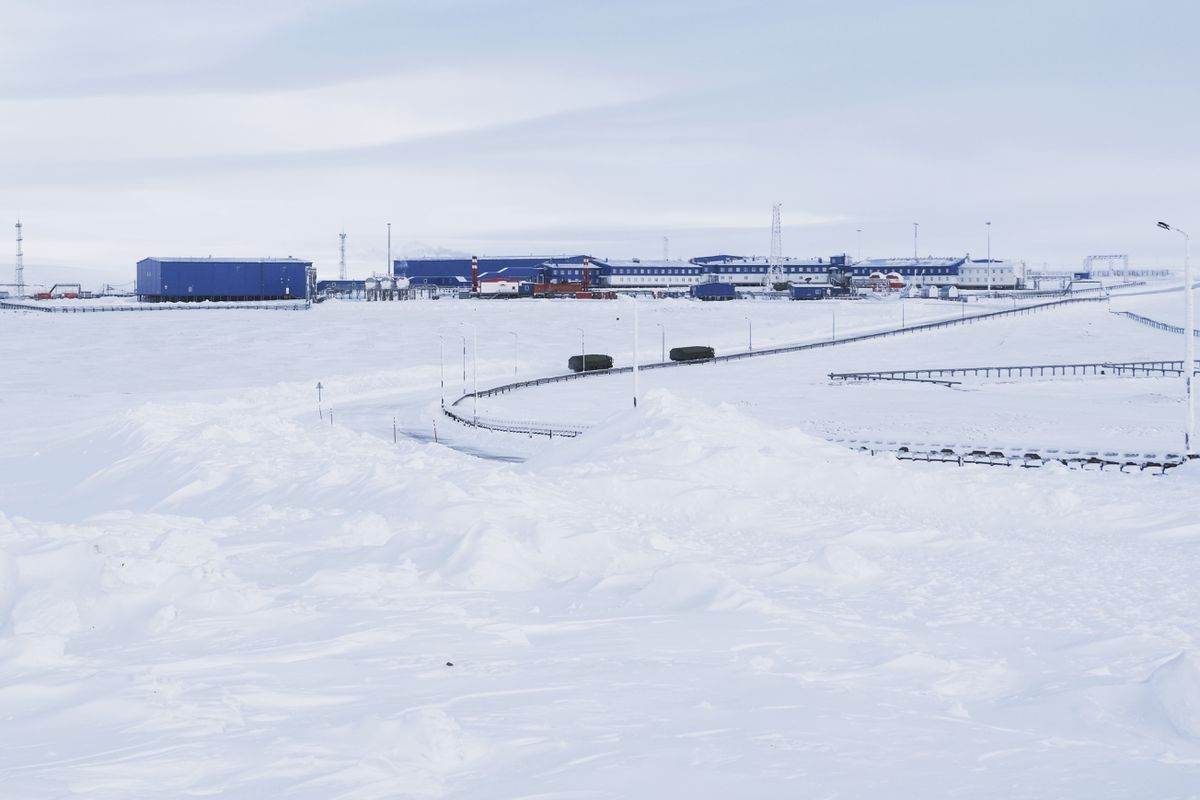 In this photo taken on Wednesday, April 3, 2019, Russian military's Bastion missile launchers are seen moving toward the Severny Klever (Northern Clover) Russian military base on Kotelny Island, part of the New Siberian Islands archipelago located between the Laptev Sea and the East Siberian Sea, Russia. Missile launchers ply icy roads and air defense systems point menacingly into the sky at this Arctic military outpost _ a key vantage point for Russia to project power to the resource-rich polar region. Russia, has made reaffirming its presence in the Arctic the top goal. The region is believed to hold up to one-quarter of the planet's undiscovered oil and gas. (AP Photo/Vladimir Isachenkov)

In this photo taken on Wednesday, April 3, 2019, Russian military's Bastion missile launchers are seen moving toward the Severny Klever (Northern Clover) Russian military base on Kotelny Island, part of the New Siberian Islands archipelago located between the Laptev Sea and the East Siberian Sea, Russia. Missile launchers ply icy roads and air defense systems point menacingly into the sky at this Arctic military outpost _ a key vantage point for Russia to project power to the resource-rich polar region. Russia, has made reaffirming its presence in the Arctic the top goal. The region is believed to hold up to one-quarter of the planet's undiscovered oil and gas. (AP Photo/Vladimir Isachenkov)

SEVERNY KLEVER MILITARY BASE, Russia — Missile launchers ply icy roads and air defense systems point menacingly into the sky at this Arctic military outpost, a key vantage point for Russia to project its power over the resource-rich polar region.

The base, dubbed Severny Klever (Northern Clover) for its trefoil shape, is painted in the white, blue and red colors of the Russian national flag. It has been designed so soldiers can reach all of its sprawling facilities without venturing outdoors — a useful precaution in an area where temperatures often plunge into the minus-50s during the winter, and are often below freezing in the short Arctic summer nights.

It's strategically located on Kotelny Island, between the Laptev Sea and the East Siberian Sea on the Arctic shipping route, and permanently houses up to 250 military personnel responsible for maintaining air and sea surveillance facilities and coastal defenses like anti-ship missiles.

The Russian base has enough supplies to remain fully autonomous for more than a year.

"Our task is to monitor the airspace and the northern sea route," said base commander Lt. Col. Vladimir Pasechnik. "We have all we need for our service and comfortable living."

Russia is not alone in trying to assert jurisdiction over parts of the Arctic, as shrinking polar ice opens fresh opportunities for resource exploration and new shipping lanes. The United States, Canada, Denmark and Norway are jostling for position, as well, and China also has shown an increasing interest in the polar region.

But while U.S. President Donald Trump's administration has seen the Arctic through the lens of security and economic competition with Russia and China, it has yet to demonstrate that the region is a significant priority in its overall foreign policy. The post of special U.S. representative for the Arctic has remained vacant since Trump assumed office.

Russia, however, has made reaffirming its presence in the Arctic a top goal, not the least because the region is believed to hold up to one-quarter of the Earth’s undiscovered oil and gas. Russian President Vladimir Putin has cited estimates that put the value of Arctic mineral riches at $30 trillion.

“In Russia, the northern sea route has been described as a bonanza with lots of potential of economic development,” said Flemming Splidsboel Hansen of the Danish Institute for International Studies. “And that’s why there is a need for military capacity in the area. It is likely meant as defensive, but it is being interpreted by the West as offensive.”

Kristian Soeby Kristensen, a researcher at Copenhagen University in Denmark, said the problem of Russian hegemony in the Arctic was most obvious to Norway.

"Norway is a small country, whose next-door neighbor is mighty Russia, which has placed the bulk of its military capacity right next to them," Soeby Kristensen said. "Norway is extraordinarily worried."

In 2015, Russia submitted to the United Nations a revised bid for vast territories in the Arctic. It claimed over 463,000 square miles of Arctic sea shelf, extending more than 350 nautical miles from the shore.

As part of a multipronged effort to stake Russia’s claims on the Arctic region, the Kremlin has poured massive resources into modernizing Soviet-era installations there.

The military outpost on Kotelny Island fell into neglect after the 1991 collapse of the Soviet Union, but a massive effort to build a new base began in 2014 and took several years.

A group of reporters brought to the island by the Russian Defense Ministry on Wednesday were shown Bastion anti-ship missile launchers positioned for a drill near the shore and Pantsyr-S1 air defense systems firing shots at a practice target.

The Russian military has kept Western media from visiting its Arctic facilities, so the trip offered a unique opportunity to watch the Russian expansion up close.

A big radar dome looms on a hill overlooking the coast, underlining the base's main mission of monitoring the strategic area.

In contrast with drab, Soviet-era facilities, the pristine new base features spacious living quarters, a gym and a sauna. Putin's words about the importance of the Arctic for Russia dot the base's walls and a symbolic border post sits in a hallway.

Soldiers at the base say they are proud of their mission despite the challenging Arctic environment.

"Proving to myself that I can do it raises my self-esteem," said one of the soldiers, Sergei Belogov. "Weather is our enemy here, so we need to protect ourselves from it to serve the Motherland."

Extreme cold and fierce winds often make it hard to venture outside, and even winterized vehicles may have trouble operating when temperatures plunge to extreme lows and even special lubricants freeze.

Russian Defense Minister Sergei Shoigu reported to Putin in December that the military has rebuilt or expanded numerous facilities across the polar region, revamping runways and deploying air defense assets. He said renovation works were conducted on a long string of Arctic territories.

The expanded infrastructure has allowed the Russian military to restore full radar coverage of the nation’s 14,000-mile Arctic frontier and deploy fighter jets to protect its airspace.

The military also has undertaken a cleanup effort across the region, working to remove tens of thousands of tons of waste from the Arctic territories, most of it rusty fuel tanks left behind by the Soviet military.

The Russian soldiers share the island with polar bears, arctic foxes and wolves.

Officers said that, soon after the base opened, curious bears regularly prowled near its walls, sometimes even peering into its windows. On some occasions, soldiers had to use a truck to spook away a particularly curious bear wandering nearby.

Soldiers interviewed at the base said they marveled at the area's wildlife and its majestic Arctic landscapes.

"The nature here is extremely beautiful," said Navy Lt. Umar Erkenov, who came from southern Russia. "Meeting a polar bear is an experience that fills you with emotions. We have established friendly ties with them from the start. We don't touch them, they don't touch us."

He said he's missing his wife and daughter, whom he can only see during his leave period once a year, but is proud of his mission.

"Few people do their job under such conditions," he said. "I feel proud that I'm here with my unit, doing my duty and protecting the Motherland."

Matthew Lee in Washington, D.C. and Jan M. Olsen in Copenhagen, Denmark contributed to this report.