Senate panel votes to advance Trump’s pick to be military’s No. 2, despite sexual assault allegations 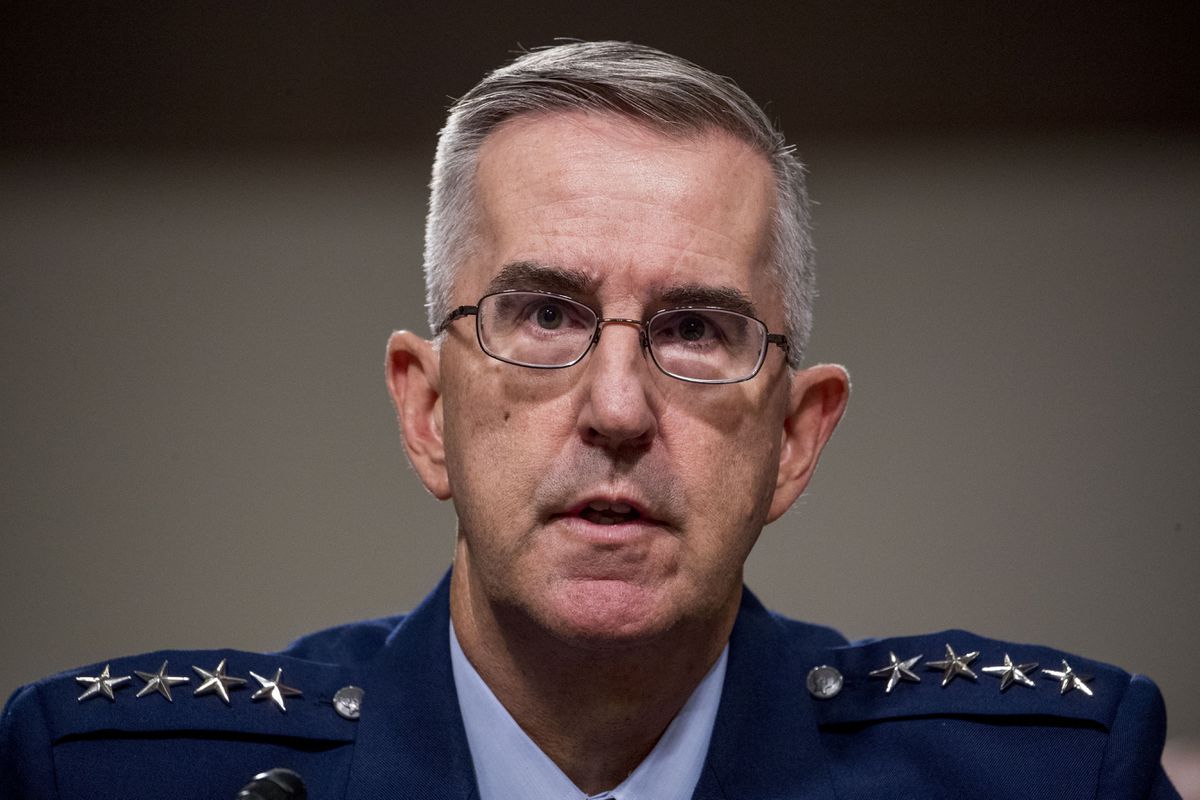 Gen. John Hyten appears before the Senate Armed Services Committee on Capitol Hill in Washington, Tuesday, July 30, 2019, for his confirmation hearing to be Vice Chairman of the Joint Chiefs of Staff. (AP Photo/Andrew Harnik)

Gen. John Hyten appears before the Senate Armed Services Committee on Capitol Hill in Washington, Tuesday, July 30, 2019, for his confirmation hearing to be Vice Chairman of the Joint Chiefs of Staff. (AP Photo/Andrew Harnik)

WASHINGTON - The Senate Armed Services Committee voted Wednesday to recommend that President Donald Trump’s pick to be the military’s second-highest officer be confirmed by the full Senate, despite an Army colonel’s allegations that he repeatedly sexually assaulted her while she served under him.

The vote was 20 to 7, reflecting bipartisan support for Gen. John Hyten, currently in charge of the national's nuclear arsenal as the head of U.S. Strategic Command, and who was nominated in April to serve as vice chairman of the Joint Chiefs of Staff.

The vote also reflected bipartisan opposition, after Sen. Joni Ernst (R-Iowa) decided to vote against recommending Hyten's confirmation due to "his inability to address toxic leadership and exercise sound judgment while serving as STRATCOM Commander," according to her spokeswoman, Kelsi Daniell.

Hyten appeared before the committee for his confirmation hearing Tuesday, where he flatly denied Col. Kathryn Spletstoser's charges that during 2017, he attempted to kiss or have sex with her on multiple occasions while the two were on work trips.

"These allegations are false," Hyten told senators Tuesday. "There was a very extensive, thorough investigation . . . that revealed the truth: Nothing happened, ever."

The Air Force Office of Special Investigations' probe produced a 1,400-page report that did not substantiate Spletstoser's claims, according to the military and senators on the panel, who were able to review it. Most of them backed Hyten up this week - including, critically, Sen. Martha McSally, R-Ariz., who was raped by a superior officer while she served in the Air Force, and who said she was sure that Hyten had been "falsely accused."

Former Air Force secretary Heather Wilson also defended Hyten to the panel, telling senators that he "was falsely accused," and surmising that Spletstoser might be "a wounded soldier who believes what she is saying is true, even if it is not."

Spletstoser, who was watching from the audience after the committee denied her request to speak publicly at the hearing, said Wilson's comments were "disrespectful and uninformed." She also fully disputed Hyten's testimony that the encounters she alleged did not happen, telling reporters afterward that Hyten "lied" and made "false official statements under oath."

Hyten testified that Spletstoser had been a "brilliant" employee, but one who created a "toxic work environment" that ultimately led to him signing off on a reprimand that pushed her out of his command in early 2018. Yet his enthusiastic support of her through late 2017, reflected in performance evaluations provided by Spletstoser to The Washington Post that could not be independently verified, perplexed some senators - and Spletstoser has questioned why Hyten only chose to discipline her after she alleges the worst of the assaults happened.

In December 2017, she alleges that Hyten came to her hotel room while both were traveling for the Reagan National Defense Forum, and pinned her to him while he attempted to have sex with her, but prematurely ejaculated. She did not tell anybody about it at the time, she said in an interview, because she was concerned about the personal and professional repercussions of reporting on a four-star general.

After reviewing the materials and hearing from both Hyten and Spletstoser behind closed doors, as well as Hyten in his public confirmation hearing, most senators on the panel decided they did not believe her.

"If at the end of this process there had still been ambiguity over whether General Hyten may have committed the heinous crimes described in the allegations, I would have voted against advancing his nomination," Sen. Tim Kaine, D-Va., said in a statement. "But the investigations conducted both by the military and the Committee produced evidence that General Hyten did not sexually assault Colonel Spletstoser or engage in an unprofessional relationship with her."

But some senators aren't so sure. Even if they didn't leap to defend Spletstoser's version of events during Tuesday's confirmation hearing, some Democrats said they still questioned why Hyten was never removed from his post while the investigation was ongoing - and why certain text messages from his devices were never recovered as part of the Air Force's investigation.

"Even if there is no corroborating evidence - so far - there's still a question of judgment. I'm weighing all of those factors," said Sen. Mazie Hirono, D-Hawaii, one of the senators who voted no.

“I don’t see why we need to rush this,” she added, noting that the committee had raced to vote barely more than 24 hours after Hyten’s hearing, though the full Senate will not vote on his confirmation until September. “I am withholding on judgment on the ultimate vote though,” she said.