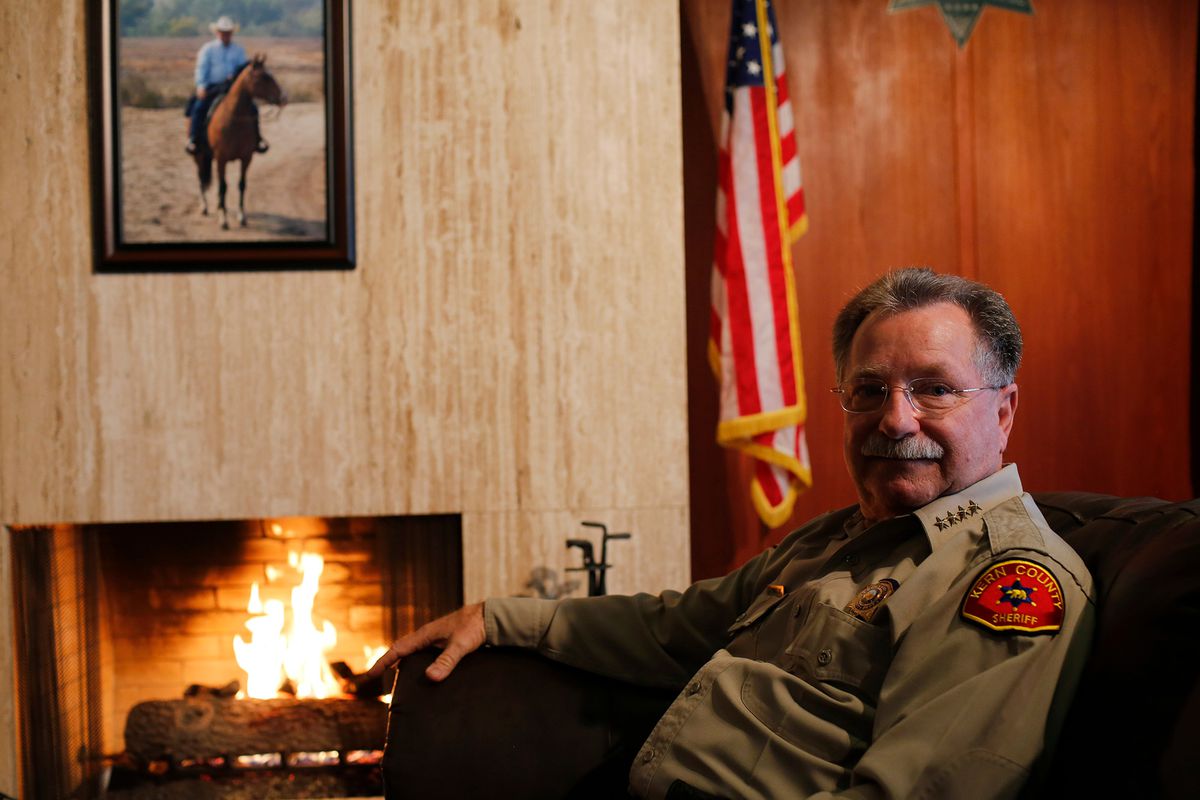 BAKERSFIELD, Calif. — In the face of an ever-growing homelessness crisis, cities across California have been searching for solutions, from adding shelters and affordable housing to improving mental health and substance abuse services.

But in Bakersfield, officials are considering a more radical approach: They want to put homeless people in jail for misdemeanor drug offenses and potentially for trespassing.

The tactic would fly in the face of criminal justice reform over the past decade in California, as the state has leaned away from incarceration for low-level, nonviolent drug crimes. It also would counter mainstream thinking on preventing homelessness and addressing the reality of it.

The plan, which is being spearheaded by Kern County Sheriff Donny Youngblood and Kern County District Attorney Cynthia Zimmer, remains in its early stages. But it has widespread support from the corridors of power in Bakersfield and Kern County.

To become reality, the pilot program will need approval from the Bakersfield City Council for the appropriation of funds, but won't require any official changes in policy. Although the county operates the jails and courts, a substantial portion of the money for the proposal is likely to come from the city.

The lack of opposition to trying to use the criminal justice system to deal with homelessness speaks to the political climate in this part of the Central Valley.

"Obviously, it's a more conservative approach," Youngblood said, describing Kern as "the last large conservative county, probably, in the state of California."

Homelessness is not a new problem in Bakersfield, the seat of Kern County, but it has surged dramatically in recent years. The city's 2019 point-in-time count, which was conducted in January, recorded a 108% increase in unsheltered homeless people compared to the prior year.

Vandalism and property damage, which law enforcement and residents associate with the homeless population, have become major issues, particularly downtown.

"The pressure from the public is enormous," Youngblood said. "When I say that the people in San Francisco and Los Angeles are fed up and they care about this issue, it's 10 times that in my county."

Youngblood and Zimmer stressed that the homeless people who would receive jail sentences would be repeat offenders. The focus would be on jailing those charged with misdemeanors for heroin and methamphetamine possession and use, but Zimmer said she would also like to see trespassing charges included.

It's unclear how arresting people for trespassing would work within the confines of current law. There are a number of court rulings and settlements that prohibit law enforcement from arresting or otherwise punishing homeless people for sleeping on public property when there aren't enough shelter beds. But Zimmer said she intends to work to develop a policy that is in line with those cases.

The sheriff said he fears that if something isn't done, more people will start trying to take matters into their own hands.

"We already have some people that go out and try and move people when they don't have the authority to do that. And that can be dangerous," he said.

Bakersfield is having a moment.

The Central Valley city topped the National Association of Realtors' recent list of the most popular housing markets for millennials, sparking a spate of good press.

In September, the city unveiled a new logo and slogan: "The sound of something better." It references the iconic country music genre known as the Bakersfield Sound and what draws many here — the idea of a better life, where what might have been out of reach in L.A. or San Francisco is attainable.

This is a place where the average rent for an apartment is $1,016 and you're likely to know your neighbors. An increasing number of downtown restaurants celebrate the agricultural bounty of the surrounding Central Valley with farm-to-table fare that's marketed as such.

But while rents may be comparatively low, the median household income in Bakersfield is also substantially lower than that of the state as a whole. In 2017, the most recent year for which census data are available, Bakersfield's median household income was $57,105 — $14,700 lower than the statewide median of $71,805. And there is increasing competition for a limited number of affordable housing units: The Bakersfield Californian recently reported that the city's multifamily residential vacancy rate fell from 4% to 2% over the last two years.

"As we continue to write our city's new narrative, we must move quickly to find solutions for those experiencing homelessness, elevate the quality of life for all people, and improve public safety," Bakersfield Mayor Karen Goh said via email.

In November 2018, local voters approved Measure N, a 1-cent sales tax focused on enhancing public safety and reducing homelessness. A homelessness crisis was officially declared by the City Council a day after the measure passed.

Measure N, which is expected to provide about $58 million annually in new funding, went into effect in April.

Both of the city's existing shelters — the Mission at Kern County and the Bakersfield Homeless Center — are at capacity. Bakersfield is working to add 40 beds to each, as well as construct a new "low-barrier" shelter to accept homeless people regardless of their sobriety. But all of that will take time, and the planned low-barrier shelter does not even have a location yet. No one seems to want it nearby.

In the meantime, there are plenty of beds — about 600 — at the Kern County jail complex, or "Lerdo," as it's commonly known. The effort would begin with a now-empty "mega barracks" that could house roughly 120 individuals.

Using the empty beds wouldn't require any new laws or sentencing guidelines to go into effect. Rather, Youngblood wants to use existing rules, but for it to work, judges would have to cooperate.

Proposition 47, a ballot initiative passed by California voters in November 2014, reclassified certain non-serious, non-violent crimes from felonies to misdemeanors, meaning they no longer carried state prison time. But many low-level theft and drug misdemeanors can still carry a potential sentence of up to one year behind bars. It's just that those sentencing maximums aren't typically followed, and misdemeanor drug crimes rarely result in jail time.

Youngblood underscored that in his view, Proposition 47 had taken away his department's ability to provide drug treatment to individuals while incarcerated.

"This really isn't about locking people up because they have a drug problem," he said. "It's about keeping them incarcerated so that they can receive treatment for whatever their affliction is."

Eve Garrow, a homelessness policy analyst with the ACLU of Southern California, said there’s no evidence that substance abuse treatment during incarceration is more effective, or as effective, as community-based treatment. The ACLU recommends community-based treatment with a heavy emphasis on diversion “because all of the research shows that this is a much more effective and humane way to help people improve their health and mental health and get back to their lives,” Garrow said.

Numerous studies also have shown that not all homeless people have a substance abuse problem.

But Youngblood admitted the proposal isn't just about drug treatment. It's also about quality of life for residents. The district attorney agreed.

"I think people have been hesitant to say these kinds of things for a while, even people in law enforcement," Zimmer said. "Because the transient population, it's just so sad and it's so pitiful and you sound like you're so mean." But, she continued, "to be safe, we've got to put some of these people in jail."

Zimmer was careful to distinguish between homeless people who are down on their luck and drug addicts and criminals. She believes that the homeless population in Bakersfield is overwhelmingly composed of the latter categories, and that the city differs from other California cities in this respect because it still has affordable housing.

She estimated that 80% of the local homeless population is severely addicted to drugs.

"Some people have severe mental health issues, but most are drug addicts," she said.

The latest point-in-time count of homeless people in Kern County found that 51% of those surveyed reported a substance abuse issue.

The idea that criminal justice reform efforts are responsible for the homelessness crisis might be considered fringe in other parts of California, but it's common in Bakersfield, voiced by civic leaders on down to business owners speaking at City Council meetings.

So much so that a slide in a city-prepared PowerPoint presentation titled "The Face of Homelessness in 2019" juxtaposed demographic data from the point-in-time count with bullet points of changes in California law — including Assembly Bill 109, commonly known as realignment, and Proposition 47 — on the same page.

Drew Soderborg, a policy analyst in the California Legislative Analyst's Office, noted that Kern County's homeless population did not rise in a straight line following the passage of Proposition 47 in 2014. Looking at yearly point-in-time data, the county's homeless population actually fell slightly from 2014 to 2015 before spiking in 2016, and then staying well below that high during 2017 and 2018.

"The size of the homeless population is going to be impacted by numerous variables, so it's hard to know how much Prop. 47 affected it," he said.

Josth Stenner, a community organizer with the grassroots nonprofit Faith in the Valley, said Bakersfield has a "tendency of kind of picking the scapegoat of the year. Last year, immigrants were causing all of our problems. This year, it's the homeless.

A few things would have to happen for the plan to become a reality.

Judges also would need to cooperate with the decision to follow sentencing maximums. In an emailed statement, Kern County Superior Court Presiding Judge Judith K. Dulcich said Zimmer had informed her of the plan, but that judges could not decide on sentences before defendants appeared in court.

The largest hurdle to surmount will be staffing at the jail complex.

Youngblood estimates that 12 new deputies will be necessary to operate that first 120-person mega-barracks. The Kern County Sheriff's Department will need to hire and train those new deputies, which will take time. The cost of paying the deputies and operating the reopened section of the jail would be about $1.6 million per year, according to the department.

The cost would grow to more than $3 million if a women's section is opened, the sheriff estimated. The amount the city will pay remains under discussion. They plan to use Measure N funds, which would require City Council approval.

There is not yet a firm timeline in place for reopening sections of the jail, but Youngblood said that, best-case scenario, the first facility could be up and running in four to six months.

Zimmer said the proposal is not a done deal yet by any stretch of the imagination.

“We’re all just very prayerful,” she said, pointing to a Bible on her desk, which was open to the second chapter of the Gospel of Matthew. “I just hope that God helps us and gives us wisdom to make the best decisions that we can for the public.”