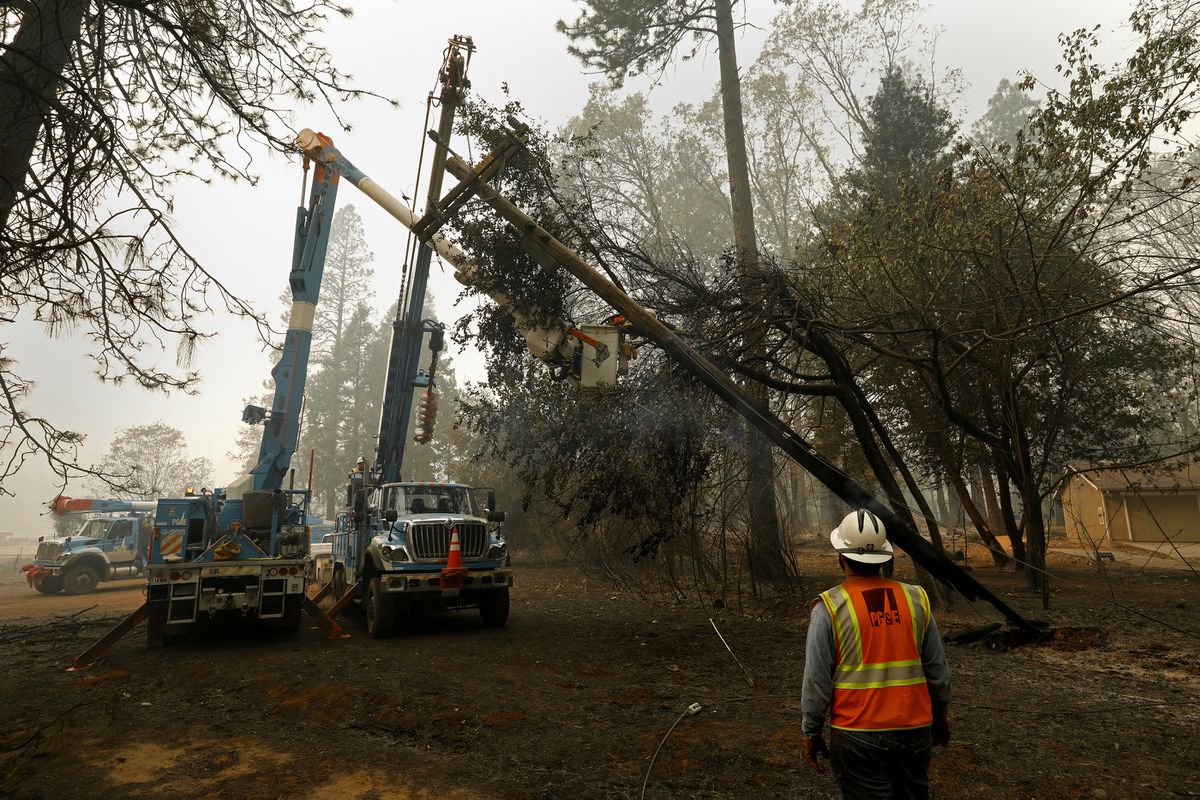 The Camp fire was the deadliest and most destructive wildfire in California history. A state investigation found that Pacific Gas & Electric equipment caused the blaze, which killed 86 people. (Carolyn Cole/Los Angeles Times/TNS)

The Camp fire was the deadliest and most destructive wildfire in California history. A state investigation found that Pacific Gas & Electric equipment caused the blaze, which killed 86 people. (Carolyn Cole/Los Angeles Times/TNS)

LOS ANGELES — Millions of Californians could spend days without power as the state’s largest utility continues shutting off electricity in a desperate attempt to avoid wildfires sparked by windblown power lines.

The first power cutoffs, affecting about 513,000 Pacific Gas & Electric Co. customers, began shortly after midnight Wednesday in several counties around Sacramento, including Placer and Yuba. Roughly five hours later, the outages had extended to Humboldt County to the north, Marin County to the south and Nevada County to the east, according to a map provided by the utility.

The second phase of the shutoff was expected to begin around noon in areas around Silicon Valley and the East San Francisco Bay, but the utility said those outages would be delayed until later in the day. About 234,000 customers in Alameda, Alpine, Contra Costa, Mariposa, San Joaquin, San Mateo, Santa Clara, Stanislaus, Tuolumne and parts of Mendocino and Calaveras counties are expected to lose power by the evening.

The PG&E blackouts will ultimately affect 34 counties in Central and Northern California, more than half of the counties in the state. Overall, power to about 800,000 customers is expected to be shut off, leaving more than 2 million people in the dark, as potentially hazardous winds continue to strengthen throughout the day.

The utility said Wednesday that it also was considering shutting off power to about 42,000 customers in the southernmost portion of PG&E’s service area, but specific locations have not been determined.

Southern California Edison said Wednesday that it too was considering preventive power outages. The utility said that, given the strong Santa Ana winds forecast for the area, power could be cut off to more than 173,000 customers in parts of eight Southern California counties. The outage could affect customers in Los Angeles, San Bernardino and Riverside counties, as well as areas in Ventura County and portions of Kern, Tulare, Inyo and Mono counties.

The move by PG&E marks the largest power shutdown to date as California utilities attempt to reduce wildfire risks amid strong winds. Equipment malfunctions have been tied to some of the state’s most destructive and deadly fires, including last year’s Camp fire, which devastated the town of Paradise, killing 85 people, and the 2017 wine country blazes.

“The safety of our customers and the communities we serve is our most important responsibility, which is why PG&E has decided to turn power off to customers during this widespread, severe wind event. We understand the effects this event will have on our customers and appreciate the public’s patience as we do what is necessary to keep our communities safe and reduce the risk of wildfire,” said Michael Lewis, PG&E’s senior vice president of electric operations.

Based on the latest forecasts, the utility says it expects high winds will last through midday Thursday, with peak winds reaching 70 mph through Thursday morning. Gusty winds and low humidity across much of the northern section of the state prompted the National Weather Service on Wednesday to issue an extreme fire weather warning.

Once the fire weather subsides, PG&E will inspect and test the grid with on-site crews and electronically before restoring service. That could take up to five days, a company official said.

The power shutoffs have generated backlash, with some residents saying they create a whole new set of dangers as they try to watch for news about fires. There is also concern about those with health issues who rely on electrically powered medical equipment to stay alive. Critics worry that communications and evacuations will be hampered if the power is out, especially if traffic signals don’t work and cellphone service is affected.

“I think this is a tacit admission that they recognize their liability for huge wildfires we’ve had and that their grid has a lot of deficiencies,” James Moore, an attorney from Auburn in Placer County, said of the widespread outages.

Moore, 35, said he realized the power had been cut off when his CPAP machine stopped working overnight. Moore and his wife, Kristen, tried to prepare as best they could with limited notice, filling cars with gas and buying ice to keep refrigerated items cold, he said.

Their home has electric appliances, so cooking will be limited to a propane grill they use for camping. And because an electric pump brings water to the property, the couple also will not have running water.

“I wish they would have been more transparent in informing people earlier of their plan to do these kind of power shutoffs,” Moore said. “I recognize the weather is not something they can predict very far in the future, but the fact they’re turning off power in 34 counties is a humongous inconvenience, to say the least.”

Lilli Heart, 73, a jeweler who works out of her home crafting pendants, bracelets and other decorative objects out of Swarovski crystals, lost everything when the Camp fire swept through Paradise 11 months ago. She’s back on her feet, living in a lakefront home in Cottonwood, but on Wednesday, she was struggling to maintain a positive outlook after her power was cut off.

At first her Facebook posts were upbeat, even cheerful.

“Ok power now down glad I just got my bowl of ice cream eating by flashlight,” she wrote and signed off with a heart emoji.

Eleven or so hours later, she was still mostly holding her own: “The wind is certainly strong today,” she posted to Facebook. “My Hummingbirds are struggling to get to their feeders. They are freaking out. Cold here too. So with no electricity or propane I used what was left to get some hot water out of the tap the last of it to make more nectar for them.”

By lunchtime, though, all bets were off. She’d swung by the vet to pick up medication for her ailing rescue cat and his cancerous thyroid. She headed to the market to pick up groceries, knowing the place was cash only and all she had on hand was $15. She answered her cellphone and let loose on PG&E and its crippled electrical grid.

“I’m really mad at them,” Heart fumed. “We’ve had high winds in California for years and they’ve never shut down the power. It’s unconscionable. They’re talking about possibly six days. I have nine orders today. I can’t fill my orders. And that’s just me. Some people are on oxygen. I think the governor needs to step in and do something.”

Daniel Swain, a University of California, Los Angeles climate scientist, wrote on Twitter that the outage is “a necessary bad idea in the short term.”

“It has high likelihood of preventing additional catastrophes like in Santa Rosa/Paradise, but shifts costs from utilities to communities in highly inequitable ways and creates new fire risks,” he said.

Online chat boards dedicated to monitoring police and fire activity in rural counties were filled with residents asking for help and advice. Some said the short notice of blackouts had caused turmoil as people searched for open gas stations to buy fuel for generators, and rushed to buy batteries and other supplies.

Brady Miller, a resident of Red Bluff, about two hours north of Sacramento, said he barely had cell service and no way to charge his phone, lamenting he had and only flashlights and canned goods to get through the power outage.

“It sucks,” he said. “Twenty-four-hour notice gave panic to our community.”

Angie Sheets of El Dorado Hills noticed that generators were flying off the shelves at the local Costco as she shopped for groceries earlier in the week. Considering the nearly $1,000 worth of food she planned to purchase and the imminent power outage, Sheets said she called her husband to talk about buying one for their home.

“By the time I had done that, the last big generator was gone off the shelves,” she said.

Her husband, a law enforcement officer, later found a generator at a Costco in Rancho Cordova and paid around $600 for it. On Tuesday night, they filled up their bathtubs with water, unsure whether the toilets would flush without electricity. Sheets went to Safeway to pick up more bottled water and said a line of cars snaked around the gas station parking lot.

“In this particular area, they did say we could lose power for up to seven days,” Sheets said. “I think that’s what’s making people on edge, the fear of the unknown and wanting to be safe for your family.”

Families in Rocklin, a city in Placer County about 20 miles from Sacramento, went to sleep Tuesday night unsure whether schools would be open in the morning or whether they would have electricity.

Ultimately, power was cut to homes in parts of the city, but the campuses in the Rocklin Unified School District opened as scheduled. Residents flooded a nearby Starbucks that still had power early Wednesday to charge electronics and buy a hot cup of coffee.

About an hour away in Placerville, the power went off around 3 a.m., leaving many angry and scrambling for supplies.

Placerville Hardware owner Albert Fausel had his store’s cash registers running on a generator at midmorning as customers roamed the aisles in darkness, loading up on flashlights, oil lamps and batteries.

Some lamented that the utility had shut off power amid only a slight breeze.

“There isn’t a tree moving right now because of the wind, and we don’t have power,” Tod Pickett said as he bought battery-powered lamps from the hardware store. “And they are telling us there’s a hurricane.”

Outages forced the closure of several schools across Northern California, including the University of California, Berkeley, which canceled classes after it was notified by PG&E that power would be cut for up to 48 hours, according to a statement by university officials.

The California State University system also had to cancel classes at Sonoma State and Humboldt State, which together have about 17,000 students.

Gov. Gavin Newsom said Wednesday he supports the utility’s decision to take “proactive measures” in the face of severe wildfire conditions. But he again lashed out at PG&E leadership for not making more efforts to make the company’s infrastructure ready for fire danger.

“They’re in bankruptcy because of their terrible management, going back decades,” Newsom said at a housing-related event in San Diego. “It’s time for them to do the right thing. Get out of bankruptcy and get this system into the 21st century.”