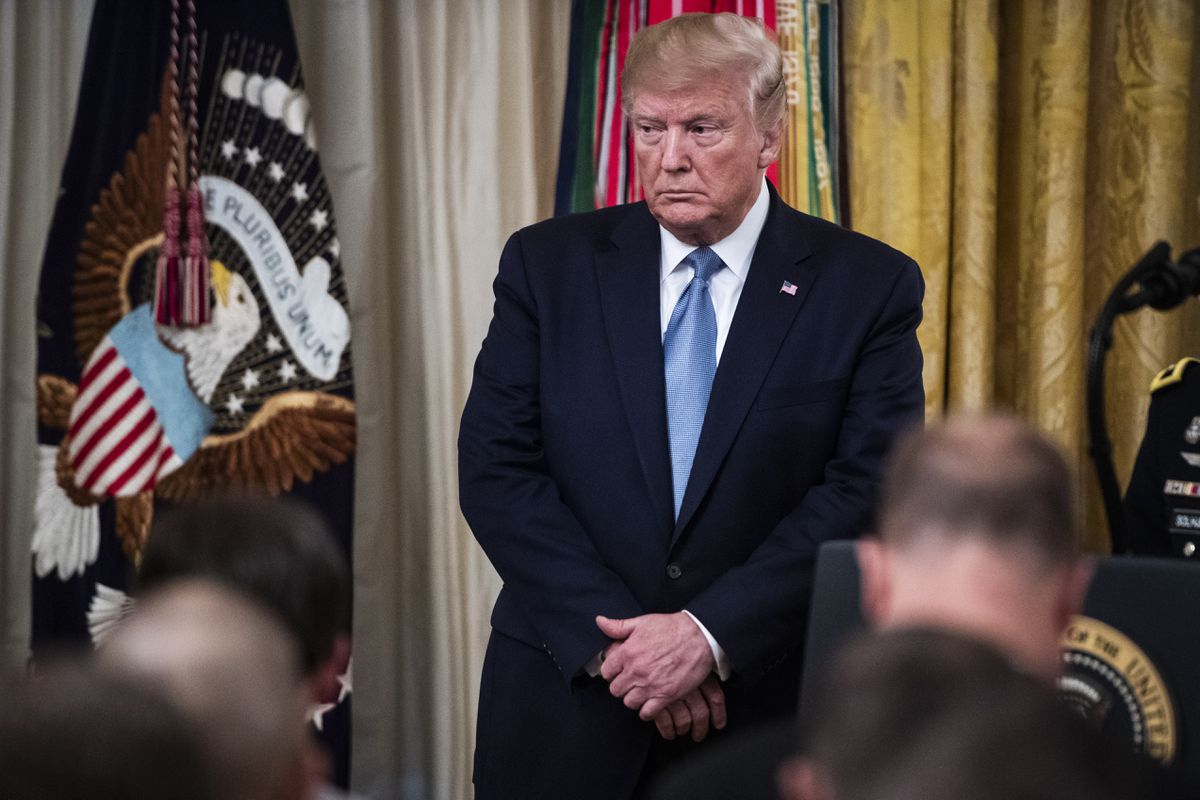 President Donald Trump listens before presenting the Medal of Honor in the East Room of the White House on Oct. 30, 2019. (Washington Post photo by by Jabin Botsford)

President Donald Trump listens before presenting the Medal of Honor in the East Room of the White House on Oct. 30, 2019. (Washington Post photo by by Jabin Botsford)

WASHINGTON - President Donald Trump has sought to intimidate witnesses in the impeachment inquiry, attacking them as “Never Trumpers” and badgering an anonymous whistleblower. He has directed the White House to withhold documents and block testimony requested by Congress. And he has labored to publicly discredit the investigation as a “scam” overseen by “a totally compromised kangaroo court.”

To the Democratic leaders directing the impeachment proceedings, Trump's actions to stymie their probe into his conduct with Ukraine add up to another likely article of impeachment: Obstruction.

The centerpiece of House Democrats’ eventual impeachment charges is widely expected to be Trump’s alleged abuse of power over Ukraine. But obstruction of Congress is now all but certain to be introduced as well, according to multiple Democratic lawmakers and aides, just as it was five decades ago when the House impeached then-president Richard Nixon. But Nixon resigned before the full House vote.

"It's important to vindicate the role of Congress as an independent branch of government with substantial oversight responsibly, that if the executive branch just simply obstructs and prevents witnesses from coming forward, or prevents others from producing documents, they could effectively eviscerate congressional oversight," said Rep. David N. Cicilline, D-R.I. "That would be very dangerous for the country."

Democrats argue that the Trump administration's stonewalling - including trying to stop subpoenaed witnesses from testifying and blocking the executive branch from turning over documents - creates a strong case that the president has infringed on the separation of powers and undercut lawmakers' oversight duties as laid out in the Constitution.

"I know of no instance when a president subject to a serious impeachment effort, whether Andrew Johnson or Richard Nixon or Bill Clinton, has essentially tried to lower the curtain entirely - treating the whole impeachment process as illegitimate, deriding it as a 'lynching' and calling it a 'kangaroo court,'" Tribe said.

"It's not simply getting in the way of an inquiry," he added. "It's basically saying one process that the Constitution put in place, thanks to people like James Madison and Alexander Hamilton, for dealing with an out-of-control president, is a process he is trying to subvert, undermine and delegitimate. That, to me, is clearly a high crime and misdemeanor."

In recent weeks, House Speaker Nancy Pelosi, D-Calif., Intelligence Committee Chairman Adam Schiff, D-Calif., and other top Democrats have become more forceful in their obstruction language. They have regularly warned the White House that any attempt to withhold or conceal evidence related to the Ukraine episode from congressional investigators could be grounds for impeachment.

Republican lawmakers, meanwhile, have been accusing Democrats of overreaching, despite their own history of using congressional subpoenas to interrogate Obama administration officials while they held the majority.

"Generally speaking, a fishing expedition that would offer subpoenas for high ranking executive officials is not something that Congress has ever expected in the past nor should it expect now - unless there is a true impeachment," said Rep. Mark Meadows, R-N.C., a Trump confidant.

"A fishing expedition like this, where [they've] gone on for three years, hoping they can subpoena everybody who's potentially talked to the president, is not what congressional subpoena power is all about and it certainly goes against the division of the branches," Meadows said.

Lawmakers have wide latitude to decide what constitutes "high crimes and misdemeanors" in drawing up articles of impeachment, which would be voted on by the House and, if passed, be subject to trial in the Senate. The standard for constituting obstruction, therefore, is different than in a criminal probe, such as special counsel Robert Mueller's Russia investigation.

"Impeachment, unlike indictment, doesn't require that you prove all the elements of the crime," said Joyce White Vance, a former U.S. attorney in Alabama during the Obama administration. "Congress is charged with determining high crimes and misdemeanors, not with violations of the federal code."

Barbara McQuade, another former Obama administration U.S. attorney from Michigan, said there is no standard for impeachment.

"Impeachment is anything Congress says it is for charging purposes in the House and for conviction purposes in the Senate," said McQuade, a professor at the University of Michigan Law School. "There can be some crimes that are not impeachable, like littering or jaywalking, and then there are some that are impeachable but not criminal, such as abusing one's power for personal purposes as opposed to acting in the best interests of the country."

Trump's treatment of Congress's witnesses is reminiscent of his behavior during the Mueller investigation. He worked to keep witnesses on his side through a mix of personal warmth to those who appeared to remain loyal and public and private hectoring and bullying of those he believed had not.

Trump was especially aggressive with his former personal attorney, Michael Cohen, who last year pleaded guilty to arranging hush-money payments to women before the 2016 election and implicated the president in the illegal scheme. When Cohen began cooperating with prosecutors, Trump lashed out, castigating his former employee as a "rat" and calling for Cohen's family members to be criminally investigated.

Similarly, Trump has been blasting witnesses now testifying against him as part of the House impeachment proceedings, even some administration officials that he appointed. The president slammed Ambassador Bill Taylor, a longtime Foreign Service officer who agreed to lead the Ukraine embassy at the personal request of Trump's secretary of state, as a "Never Trumper" who had hired Trump enemies as his lawyers.

Trump applied the same moniker to Lt. Col. Alex Vindman, a decorated Army officer and National Security Council official who flagged Trump's call with Ukraine's president as inappropriate as soon as it ended.

In another parallel to his behavior during the Mueller probe, Trump has also engaged in a relentless campaign to undermine the Ukraine investigation itself as illegitimate. This is partly a political tactic seemingly aimed at persuading his supporters to reject any damaging information that emerges from the probe as tainted and unfair.

Trump has called Democrats leading the process rank names, accused them of treason and has said they should face criminal investigations for unspecified behavior. The president also has revived the same dismissive title for the impeachment inquiry that he wielded effectively for nearly two years against Mueller: "Witch Hunt."

Trump also directed the executive branch not to comply with congressional requests for documents or testimony - a posture articulated earlier this month in a scathing memorandum to Congress from White House counsel Pat Cipollone that effectively declared war on the inquiry.

Keeping people from testifying based on intimidation or a pretextual assertion of executive privilege is the clearest element of Trump's obstruction of the congressional inquiry, according to Vance, a University of Alabama School of Law professor. She said Trump's obstructive actions have been obvious yet have not triggered commensurate outrage because they follow his now-familiar pattern of behavior.

“We’re like the frogs that are boiling,” Vance said. “It’s happened so persistently that something that’s really just blatant and obvious is obscured.”