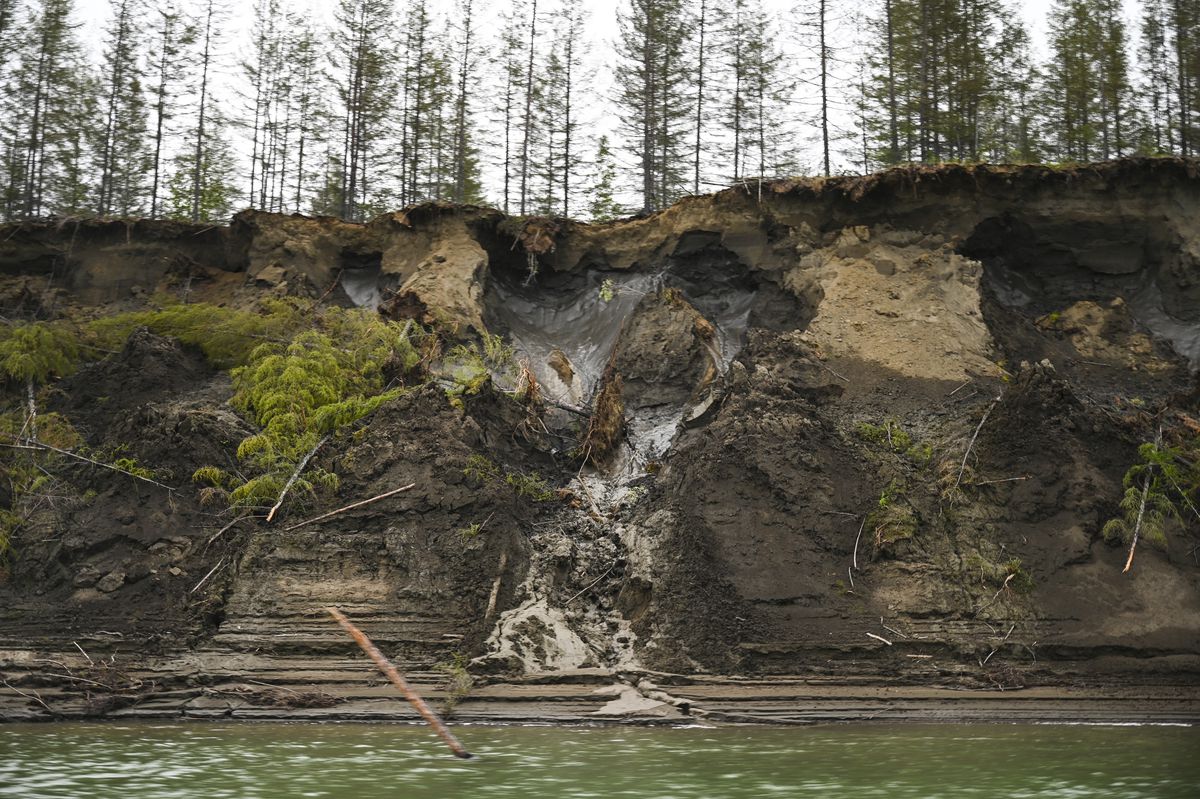 Permafrost, seen at the top of the cliff, melts into the Kolyma River outside of Zyryanka, Russia on July 4, 2019. Melting permafrost is altering Siberia's landscape and economy. (Photo by The Washington Post's Michael Robinson Chavez)

Permafrost, seen at the top of the cliff, melts into the Kolyma River outside of Zyryanka, Russia on July 4, 2019. Melting permafrost is altering Siberia's landscape and economy. (Photo by The Washington Post's Michael Robinson Chavez)

The Arctic is undergoing a profound, rapid and unmitigated shift into a new climate state, one that is greener, features far less ice, and is a net source of greenhouse gas emissions from melting permafrost, according to a major new federal assessment of the region released Tuesday.

The consequences of these climate shifts will be felt far outside the Arctic in the form of altered weather patterns, increased greenhouse gas emissions, and rising sea levels from the melting Greenland ice sheet and mountain glaciers.

The findings are contained in the 2019 Arctic Report Card, a major federal assessment of climate change trends and impacts throughout the region. The study paints an ominous picture of a region lurching to an entirely new and unfamiliar climate state.

Especially noteworthy is the report's conclusion that the Arctic may have already turned into a net emitter of planet-warming carbon emissions due to thawing permafrost, which would only accelerate global warming. Permafrost is the carbon-rich frozen soil that covers 24% of Northern Hemisphere land area, encompassing vast stretches of territory across Alaska, Canada, Siberia and Greenland.

There has been concern throughout the scientific community that the approximately 1,460-1,600 billion metric tons of organic carbon stored in frozen Arctic soils, which amounts to nearly twice as much greenhouse gases than what is contained in the atmosphere, could be released as the permafrost melts.

Warming temperatures allow microbes within the soil to convert permafrost carbon into the greenhouse gases - carbon dioxide and methane - which can be released into the atmosphere and accelerate warming. Ted Schuur, a researcher at Northern Arizona University and author of the permafrost chapter, said the report "takes on a new stand on the issue" based on other published work, including a study in Nature Climate Change in November.

Taking advantage of the new studies - one on regional carbon emissions from permafrost in Alaska during the warm season, and another on winter season emissions in the Arctic compared to how much carbon is absorbed by vegetation during the growing season - the report concludes that permafrost ecosystems could be releasing as much as 1.1 to 2.2 billion tons of carbon per year. This is almost as much as the annual emissions of Japan and Russia in 2018, respectively.

"These observations signify that the feedback to accelerating climate change may already be underway," the report concludes.

"Each of the studies has some parts of the story. Together they really paint the picture of - we've turned this corner for Arctic carbon," said Schuur. "Together they complement each other nicely and really in my mind are a smoking gun for this change already taking place."

The report notes there is still considerable uncertainty about carbon emissions estimates given the relatively limited observational measurements. But it also warns that the Arctic region - which is warming at more than twice the rate of the rest of the world, may have already turned into the global warming accelerator long been feared.

The findings come just as U.N. climate negotiators meet in Madrid to address the need for more ambitious cuts in greenhouse gas emissions, and would mean that the world faces an even steeper challenge in meeting the targets outlined in the Paris Climate Agreement.

Schuur said that the carbon being emitted by the Arctic amounts to less than 10% of fossil fuel emissions each year. "So it's a small addition to what humans are already producing," he said.

However, that number is likely to grow with time, as the Arctic continues to warm. "We've crossed the zero line," Schuur said.

"We don't think the Arctic is going to admit so much more emissions that it will make fossil fuel emissions irrelevant," but any extra emissions complicate the already difficult task of slashing them to net zero by mid-century to limit global warming to no more than 1.5-degrees Celsius, he said.

Merritt Turetsky, an ecologist at the University of Guelph who was not involved in the Arctic Report Card, said three new discoveries support its conclusion.

New information on fall and winter carbon, as opposed to summer when plants are active in the far north, "shows much greater ecosystem losses of carbon to the atmosphere than we expected," she said in an email. "So our biosphere in the North is leakier than we thought because soils are remaining warm and respiring both carbon dioxide and methane." Methane is another powerful greenhouse gas.

She said wildfires are pushing farther north into the boreal forests, and these also release carbon stored in ecosystems.

And studies in the past few years have shown that permafrost can respond rapidly to warming and increased rainfall.

"We know little about abrupt permafrost thaw, and it occurs at local scales so [it] is difficult to scale up. But our best estimate shows that abrupt thaw has the potential to double the climate impacts of traditional measurements of permafrost thaw," Turetsky said.

Sea ice in the Bering Sea grew rapidly in mid-November but has slowed dramatically in the past 10 days. As of Monday extent in @NSIDC data is similar to recent years. The trend though is dramatic: barely a third of what was typical Dec 02 in the early '80s. #akwx @Climatologist49 pic.twitter.com/OqIiEBaKVn

The broader Arctic Report Card shows the region is undergoing extensive changes in the marine environment as well as frozen lands. The Bering Sea, in particular, has seen “disquieting” shifts in the past two years, the report finds. What happens here is crucial for the U.S. economy, given that about 40% of the domestic fish and shellfish catch, worth more than $1 billion, comes from this region every year.

For the past two years, the maximum sea ice extent in the Bering Sea has been at record lows, at about 30% of the long-term mean from 1980 through 2010, the new report finds.

This is due to a few factors, including unusually mild, southerly winds during winter that pushed sea ice northward and transported warm, moist air into the Pacific portion of the Arctic. In addition, the late freeze-up of the bordering Chukchi Sea in the previous fall seasons helped to delay ice formation in the northern Bering Sea, and warm ocean temperatures from low sea ice conditions slowed the advance of new ice as air temperatures cooled.

The wintertime ice retreat is crucial, since it causes ripple effects on fisheries by governing the placement of frigid waters that sink near the bottom of the continental shelf. As ice retreats, taking this cold water with it, a mass migration of fish species is underway in the Bering Sea, with Arctic species such as Pacific cod and walleye pollock moving north, replaced by southern species such as northern rock sole.

In the southeastern Bering Sea, warming has accelerated to the point that the "cold pool" - the frigid, salty water that provides a barrier between its southern stretch from its northern, Arctic region - shrank from covering 56% in 2010 to 1.4% in 2018. It only inched up to 6.3% this year, and species such as Pacific cod surged north.

"I don't think it was on anyone's radar that it could disappear," said Lyle Britt, who oversees the NOAA Fisheries Bering Sea bottom trawl survey.

Britt said he and other researchers are still analyzing the area’s fish to determine how many have migrated from southern waters.

"This is a big change to the ecosystem," he said. "We have a lot of work to do with genetics just to make sure we know where the fish is coming from."

According to Mellisa Johnson, an Inupiaq who is executive director of Bering Sea Elders Group, coastal Bering Sea communities are grappling with the loss of sea ice, which dramatically alters their ability to access food sources such as seals, walrus and bowhead whales.

"We have to continue to look for alternative food sources," she said in an interview.

To illustrate the swiftness and complexity of the changes indigenous communities are seeing, she said people are "having to create new words to depict what is going on with our changing environment," citing a new type of plant that has shown up in the region as air and ground temperatures have warmed.

Alaska has had its hottest year to date in 2019, with no sea ice visible from the shoreline in Nome as of Dec. 9, which is highly unusual for this time of year.

"We fear for our young people; we worry that they will grow without the same foods and places that we have known throughout our lives," says a chapter written by a group of indigenous representatives in the Arctic Report Card. "We are no longer able to reliably predict the weather," the report states, citing the reduced use of knowledge passed down from one generation to the next.