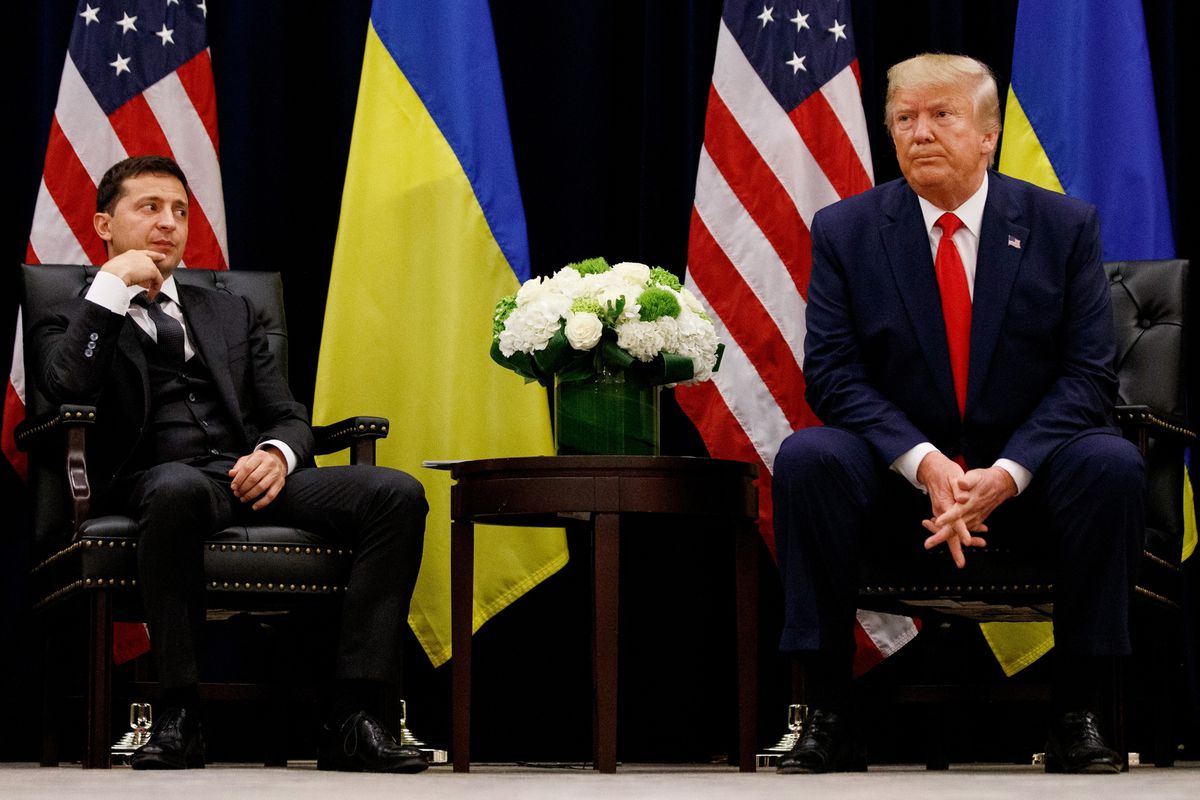 FILE - In this Sept. 25, 2019 file photo, President Donald Trump meets with Ukrainian President Volodymyr Zelenskiy in New York during the United Nations General Assembly. Trump's demand that Ukraine look into its own purported interference in the 2016 U.S. election and investigate a political rival, former Vice President Joe Biden, while the U.S. withheld the aid is at the heart of the congressional investigation that produced Trump's impeachment in the House on charges of abuse of power and obstruction of Congress. (AP Photo/Evan Vucci, File)

FILE - In this Sept. 25, 2019 file photo, President Donald Trump meets with Ukrainian President Volodymyr Zelenskiy in New York during the United Nations General Assembly. Trump's demand that Ukraine look into its own purported interference in the 2016 U.S. election and investigate a political rival, former Vice President Joe Biden, while the U.S. withheld the aid is at the heart of the congressional investigation that produced Trump's impeachment in the House on charges of abuse of power and obstruction of Congress. (AP Photo/Evan Vucci, File)

WASHINGTON - The White House violated federal law in its hold on security aid to Ukraine last year, according to a decision by a congressional watchdog released on Thursday.

The Government Accountability Office, a nonpartisan agency that reports to Congress, found the Trump administration violated a law that governs how the White House disburses money approved by Congress.

The GAO decision comes as the Senate prepares for the impeachment trial of President Donald Trump, a process set to begin Thursday.

"Faithful execution of the law does not permit the President to substitute his own policy priorities for those that Congress has enacted into law," the decision states. "OMB withheld funds for a policy reason, which is not permitted under the Impoundment Control Act."

The White House quickly rebutted the charge, criticizing the agency's decision as an "overreach" and an attempt to insert itself into the "media's controversy of the day."

"We disagree with GAO's opinion," said OMB spokeswoman Rachel Semmel. "OMB uses its apportionment authority to ensure taxpayer dollars are properly spent consistent with the President's priorities and with the law."

There are no potential criminal penalties associated with violating the Impoundment Control Act, meaning there will be no prosecution of officials for the violation. But Democrats immediately tried to use the report to demand more disclosures as part of their impeachment push.

"The OMB, the White House, the administration broke - I'm saying this - broke the law," House Speaker Nancy Pelosi, D-Calif., said Thursday. "This reinforces, again, the need for documents and eyewitnesses in the Senate."

Last month, the Democratic-controlled House impeached Trump on charges of abusing the power of his office in a pressure campaign against Ukraine.

Trump has attacked the impeachment charges as politically motivated. White House budget officials have defended their power to stop the money from being given to the Defense Department, arguing both congressional lawmakers and executive branch officials routinely demand delays on funding already signed into law.

The report brings new scrutiny to a chain of events at the White House's Office of Management and Budget last year. When top White House officials gave directives to the Pentagon to withhold aid for Ukraine, some OMB officials objected, warning the halt could be improper. At least two officials resigned, in part over concerns about the Ukraine money.

White House officials were withholding the security aid at a time when Trump was pressing Ukraine's new leader to announce an investigation into Joe Biden's son. Emails released in late December showed that a senior budget official directed the Defense Department to hold off on the aid less than two hours after Trump's July 25 call with Ukrainian President Volodymyr Zelensky.

The president and White House have strongly denied any wrongdoing over the hold on security assistance. The U.S. Ambassador to the European Union, Gordon Sondland, told Congress that he believed there was a connection between the aid and Trump's desire for Ukraine to announce investigations.

The GAO found that the administration broke the Impoundment Control Act - a 1974 law that provides a mechanism for the executive branch to request that Congress reconsider a funding decision that's been signed into law.

The GAO report was widely expected to stay away from the specific House impeachment charges. House lawmakers impeached Trump on two counts, abuse of power and obstruction of Congress. Lawmakers alleged that the president abused the power of his office in withholding the money as leverage to pressure Zelensky into publicly announcing investigations that would undermine a political rival, and then obstructed the investigation into those actions.

The release of the GAO decision, one day after the House voted to send its articles of impeachment to the Senate, may give political ammunition to congressional Democrats hoping to portray the president and his administration as willing to violate the law for political gain.

Senate Majority Leader Mitch McConnell, R-Ky., has characterized the House articles of impeachment as flimsy, and it is unlikely there are enough votes in the Senate to remove Trump from office. Trump has "done nothing wrong," White House press secretary Stephanie Grisham said Wednesday.

The controversy has for months focused attention on the White House budget office over its central role in delaying the aid.

The administration has previously disagreed with the GAO's findings, including last year when GAO said the Trump administration violated federal spending law during the government shutdown by allowing popular park sites to stay open.

In cases of a violation, the most the GAO can do is sue the administration to release money, which has happened only once - in the 1970s. The lawsuit was later dismissed when the funds were released.

Several administrations have been slapped by the GAO, including that of Bill Clinton and George W. Bush. In general, those administrations released funds after being cited, making lawsuits unnecessary. Most recently, in December 2018, the GAO said the Department of Homeland Security illegally withheld $95 million appropriated for the Coast Guard to support national security efforts. The funds were eventually released.

GAO also found in 2014 that the Obama administration broke the law in exchanging five Taliban commanders for a captured U.S. soldier without giving Congress 30 days notice.

OMB first began discussing the aid to Ukraine on June 19, the day Trump learned of the assistance from an article in the Washington Examiner.

OMB extended a temporary hold on the aid eight times in August and September before Trump agreed to its release under pressure to do so from Vice President Mike Pence and Sen. Rob Portman, R-Ohio, on Sept. 11, having already been informed about a whistleblower complaint about the aid hold and Ukraine pressure campaign and in the wake of a Sept. 9 announcement by three Democratic-controlled House committees that they were probing whether the aid was withheld to pressure Ukraine for political purposes.

Democrats have alleged that OMB overstepped its legal authority in restricting the funds. The White House cannot legally substitute its policy judgment over a decision signed into law by Congress.

"If the executive branch violates the [Impoundment Control Act] with impunity, then Congress loses its power to direct the expenditures of federal funds and any program authorized in law could be defunded by Executive fiat," Van Hollen wrote in a letter to Gene L. Dodaro, comptroller general of the GAO, in December.

In a legal memo released in December, OMB's top lawyer defended the hold as legal and within the bounds of precedent.

"For decades, OMB has routinely used its apportionment authority to prevent funds from being used," OMB general counsel Mark Paoletta wrote in a December memo to GAO.

"Often, in managing appropriations, OMB must briefly pause an agency's legal ability to spend those funds for a number of reasons, including to ensure that the funds are being spent efficiently, that they are being spent in accordance with statutory directives, or to assess how or whether funds should be used for a particular activity."

Paoletta asserted the hold was a "programmatic delay," a routine hold on funding that is legal.

GAO General Counsel Tom Armstrong in his decision states that "OMB's assertions have no basis in law." Programmatic delays occur when an agency is "taking necessary steps to implement a program, but because of factors external to the program, funds temporarily go [unreleased]." Here, Armstrong wrote, "there was no external factor causing an unavoidable delay. Rather, OMB on its own volition explicitly barred DOD from obligating amounts."

In September, on the sidelines of a United Nations General Assembly session, Trump told reporters his concern over the Ukraine aid was corruption. "We want to make sure that country is honest," he said. "It's very important to talk about corruption. If you don't talk about corruption, why would you give money to a country that you think is corrupt?"

The following day, he suggested he blocked the aid because European countries weren't providing their fair share of aid Ukraine.

“OMB was withholding the funds as part of an extortion scheme to pressure Ukraine,” said Sam Berger, a former senior attorney at OMB during the Obama administration. "That’s illegal.