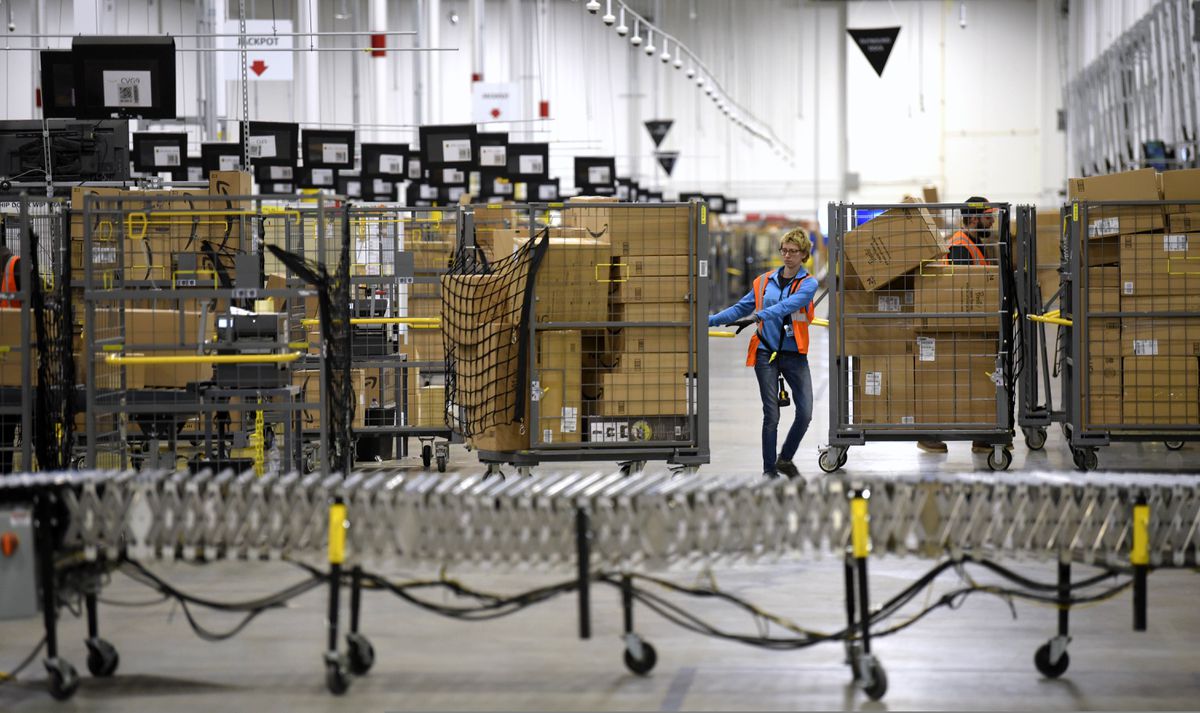 FILE - In this Friday, March 23, 2018, file photo, associates move bins filled with products at the loading dock of Amazon's then-new fulfillment center in Livonia, Mich. On Monday, March 16, 2020, Amazon said that it needs to hire 100,000 people across the U.S. to keep up with a crush of orders as the coronavirus spreads and keeps more people at home, shopping online. (Todd McInturf/Detroit News via AP, File)

FILE - In this Friday, March 23, 2018, file photo, associates move bins filled with products at the loading dock of Amazon's then-new fulfillment center in Livonia, Mich. On Monday, March 16, 2020, Amazon said that it needs to hire 100,000 people across the U.S. to keep up with a crush of orders as the coronavirus spreads and keeps more people at home, shopping online. (Todd McInturf/Detroit News via AP, File)

SEATTLE - The U.S. coronavirus outbreak has spread to at least 10 Amazon warehouses, infecting workers racing to deliver massive volumes of packages for consumers leery of leaving their homes to shop.

In the past few days, workers tested positive for covid-19 at Amazon warehouses and shipping facilities across the country, from New York to California and Michigan to Texas. In some cases, Amazon shut down facilities for cleaning, and some workers who were in close contact with their infected colleagues have been quarantined.

But some workers complain Amazon hasn't provided them with enough information about the spread of virus in their facilities.

Bobbi Johnson heard rumors at her sortation center but only found out there was an infected co-worker after confronting a human resources staffer in the break room. Worried about her immunocompromised children, she took off three days last week and another two this week and is nervous about returning, but she needs the paycheck.

"You still have bills. You still have children you have to feed," said Johnson, who works in Brownstown, Michigan, just outside Detroit.

Just last week, warehouse workers sounded alarms that the company is not doing enough to protect them from the virus. That came after workers at Amazon warehouses in Spain and Italy tested positive for the virus. Since then, more than 1,500 workers from around the world have signed a petition that calls on the company to take additional steps to ensure safety in the workplace.

Some workers complained that Amazon pushes them to meet the per-hour rate at which it wants orders fulfilled, a practice that they worry discourages safe sanitary practices such as washing hands after a cough or sneeze. Others have complained about "stand-up" meetings, where workers stand shoulder-to-shoulder at the start of each shift.

"We are supporting the individuals, following guidelines from local officials, and are taking extreme measures to ensure the safety of all the employees at our sites," Amazon spokeswoman Lisa Levandowski said in an emailed statement.

The company has recently adopted new policies for its warehouses, including more regularly cleaning door handles, stairway handrails, touch screens and more, Levandowski said. It's nixed stand-up meetings, staggered start and break times to aid social distancing, and suspended screening workers as they leave to improve the flow of workers, she said.

Amazon, though, is struggling to get workers all the protection it wants them to have. The company placed orders for "millions of face masks" to give to employees and contractors who cannot work from home, Bezos wrote in a letter to employees Saturday. Because of the global shortage of those masks, though, very few of those orders have been filled, he wrote.

The new outbreaks at Amazon's U.S. facilities come days after the online retail giant announced plans to hire 100,000 new workers to help cope with the flood of orders that have clogged its system. That unexpected surge has rendered Amazon unable to stock and ship household staples to many customers who have come to rely on the company's convenience.

Amazon has more than 175 warehouses around the globe, including more than 110 in North America. In the space of just the past few days, Amazon workers tested positive for covid-19, the disease caused by the novel virus, in Shepherdsville, Kentucky; Jacksonville, Florida; Katy, Texas; Brownstown; Oklahoma City; Moreno Valley, California; Joliet, Illinois; Wallingford, Connecticut; and at two New York City facilities, according to Amazon and local media reports.

Levandowski declined to say whether workers at any other Amazon facility have tested positive for covid-19.

Some workers said the lack of information is frightening, even in facilities where there haven't been confirmed reports of the virus. Jana Jumpp works stowing products at a warehouse in Jeffersonville, Indiana, not far from the Kentucky facility where the virus has spread. Jumpp has worked for Amazon for four years, and she praised the company for offering a program that helped pay for her studies at a local massage school.

But little information and protective equipment and limited paid leave have caused her to sour.

"It's showing you the callousness of the company," Jumpp said.

Politicians are increasing pressure on the company to do more. On Wednesday, a group of attorneys general from 14 states and the District of Columbia called the paid sick leave policies at Amazon and Amazon-owned Whole Foods "inadequate to protect the public health during the developing covid-19 crisis." The attorneys general, who include Bob Ferguson from Amazon's home state of Washington, expressed concern that the leave policy might encourage workers who have the virus to show up for work and spread it to others.

"This would seriously undercut efforts to promote 'social distancing' in order to 'flatten the curve' of infections and to avoid overloading our already strained health care system," the attorneys general wrote in a letter to Bezos and Whole Foods chief executive John Mackey.

One thing Amazon has done to help workers, and lure new ones, is increase the pay for hourly employees through April by $2 an hour in the United States, 2 pounds an hour in the United Kingdom and about 2 euros an hour in parts of the European Union. The company, which generated $280.5 billion in sales last year, said the pay hikes will cost $350 million.

Despite the spread of the coronavirus in Amazon's U.S. warehouses, it probably will find workers for the new posts, said Elaine Kwon, founder of e-commerce management and software firm Kwontified and a former Amazon manager. With unemployment claims already soaring as businesses shutter from the coronavirus fallout, laid-off workers will need income to pay their rents and feed their families.

"Quite a few people will be willing to take the risk," Kwon said.

Amazon has long had a contentious relationship with some warehouse workers, fighting efforts in the United States and abroad to unionize. The company, which has nearly 800,000 workers worldwide, most of whom work in its warehouses, has faced criticism for harsh working conditions, insufficient bathroom breaks and difficult-to-attain goals.

Democratic presidential candidate Sen. Bernie Sanders, I-Vt., has denounced the company for paying subsistence wages to its warehouse staff. And after the company raised its minimum wage to $15 an hour in 2018, it caught heat for taking away some bonuses and stock grants for warehouse workers.

"We write today to strongly urge you to prioritize the health, safety, and well-being of your employees who are also our constituents, friends, family, and neighbors," the senators wrote.

The senators noted that Amazon could also put “the entire country at risk” if warehouse conditions aren’t sanitary, because the coronavirus can live for up to 24 hours on cardboard and up to three days on plastic and stainless steel. They asked Bezos to respond to a series of questions by Thursday.