Hospitals overflow with bodies in New York City, the US epicenter of the coronavirus 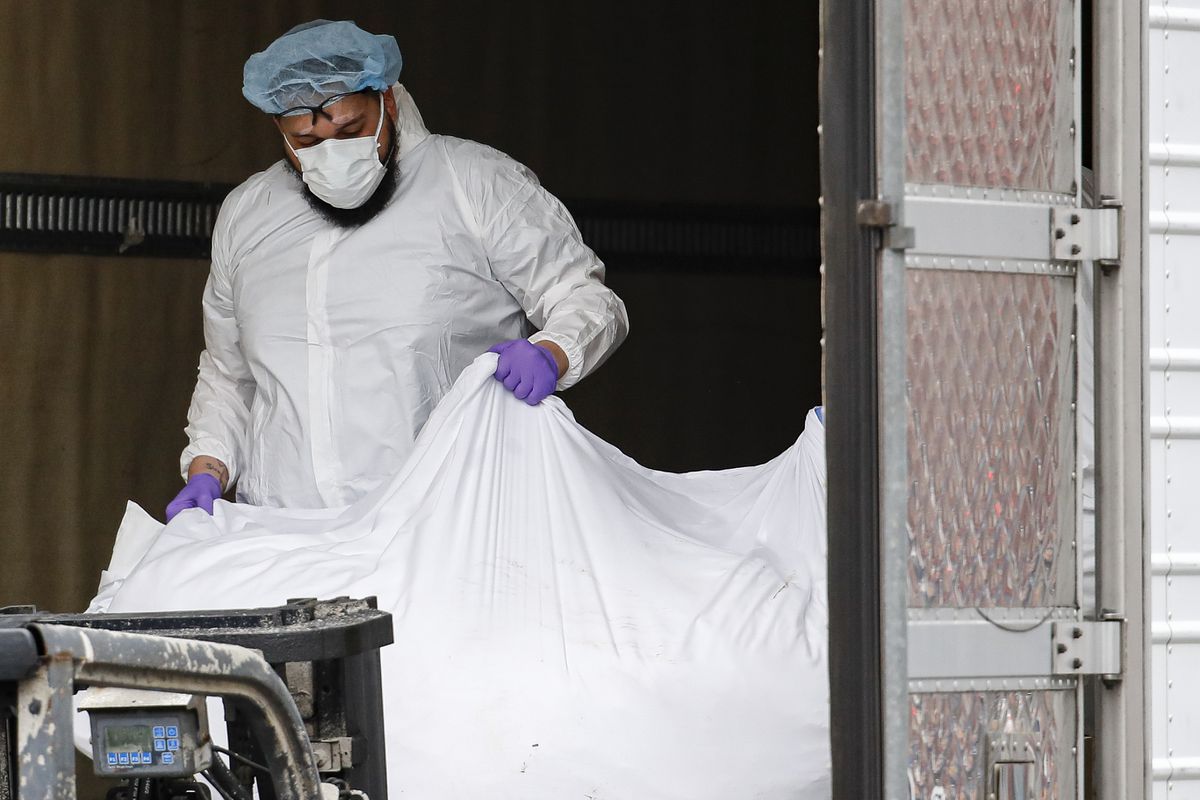 A body wrapped in plastic is loaded onto a refrigerated container truck used as a temporary morgue by medical workers wearing personal protective equipment due to COVID-19 concerns, Tuesday, March 31, 2020, at Brooklyn Hospital Center in the Brooklyn borough of New York. (AP Photo/John Minchillo)

A body wrapped in plastic is loaded onto a refrigerated container truck used as a temporary morgue by medical workers wearing personal protective equipment due to COVID-19 concerns, Tuesday, March 31, 2020, at Brooklyn Hospital Center in the Brooklyn borough of New York. (AP Photo/John Minchillo)

NEW YORK — It has become a grim ritual outside New York City’s hospitals: workers in protective gear loading the bodies of coronavirus victims into refrigerated trailers.

A surge in deaths in the epicenter of the crisis in the U.S. has overwhelmed the city’s permanent morgues and filled storage spaces in many hospitals to capacity. The Federal Emergency Management Agency is sending 85 refrigerated trucks to serve as temporary morgues, the city said.

The number of coronavirus deaths in New York state more than doubled in 72 hours to 1,941, and Gov. Andrew Cuomo said projections show the outbreak worsening through the month.

The sobering news from the governor came as he pledged to close New York City playgrounds to slow the spread of the virus, leaving green spaces open. He said overburdened hospitals in hard-hit downstate areas have begun transferring patients north to the Albany area.

A month after New York discovered its first infection, the state tallied more than 83,000 positive cases. The 1,941 deaths were up from 965 Sunday morning.

The governor cited projections showing the outbreak reaching its apex roughly by the end of April, “which means another month of this.”

There are more than 12,000 people hospitalized currently. The number is expected to grow dramatically.

Data released by the city shows that the disease is having a disproportionate effect in certain neighborhoods, mainly in Brooklyn and Queens.

An emergency field hospital opened Wednesday in Central Park near The Mount Sinai Hospital, days after a temporary hospital in the Jacob K. Javits Convention Center began taking patients and a Navy hospital ship docked off Manhattan. Officials are scrambling to add more beds around the city as hospitals become overrun.

Nearly 16% of the New York Police Department's uniformed force is now out sick. More than 1,000 officers have tested positive for the virus.

At Brooklyn Hospital Center, where a worker Tuesday wheeled out a gurney carrying a body covered in white plastic, a forklift operator carefully raised a body into the trailer and undertakers came to claim the remains of yet another of the city’s nearly 1,000 coronavirus dead.

The hospital said in a statement that the “unprecedented crisis calls for extraordinary measures” and that extra storage is needed “to accommodate the tragic spike in deaths, placing a strain on the entire system of care — from hospitals to funeral homes.”

“Grieving families cannot quickly make arrangements, and their loved ones who have passed are remaining in hospitals longer, thus the need for this accommodation,” the hospital in Brooklyn’s Fort Greene neighborhood said.

The city's medical examiner's office has also started operating a makeshift morgue, as it did after the Sept. 11 attacks, to provide emergency capacity as the city’s permanent facilities fill up.

For most people, the coronavirus causes mild or moderate symptoms, such as fever and cough. But for others, especially older adults and people with existing health problems, the virus can cause severe symptoms like pneumonia and can be fatal.

The city and FEMA have delivered refrigerated trucks to various hospitals, while the Office of Chief Medical Examiner has been guiding them on how to properly move and store bodies, officials said.

“To see the scenes of trailers out there and what they're doing with those trailers — they're freezers, and nobody can even believe it,” President Donald Trump said Tuesday.

At some hospitals, like Lenox Hill in Manhattan, the trailers are being parked on city streets, along sidewalks and in front of apartments. Cars and buses passed by as bodies were loaded Tuesday outside Brooklyn Hospital Center.

Cellphone videos posted on social media over the weekend drew attention to hospitals using trailers to store bodies. An image from one video of the activity outside Brooklyn Hospital Center appeared on the front page of Tuesday’s New York Post.