Crowds gather near White House for 10th day of protests in D.C. 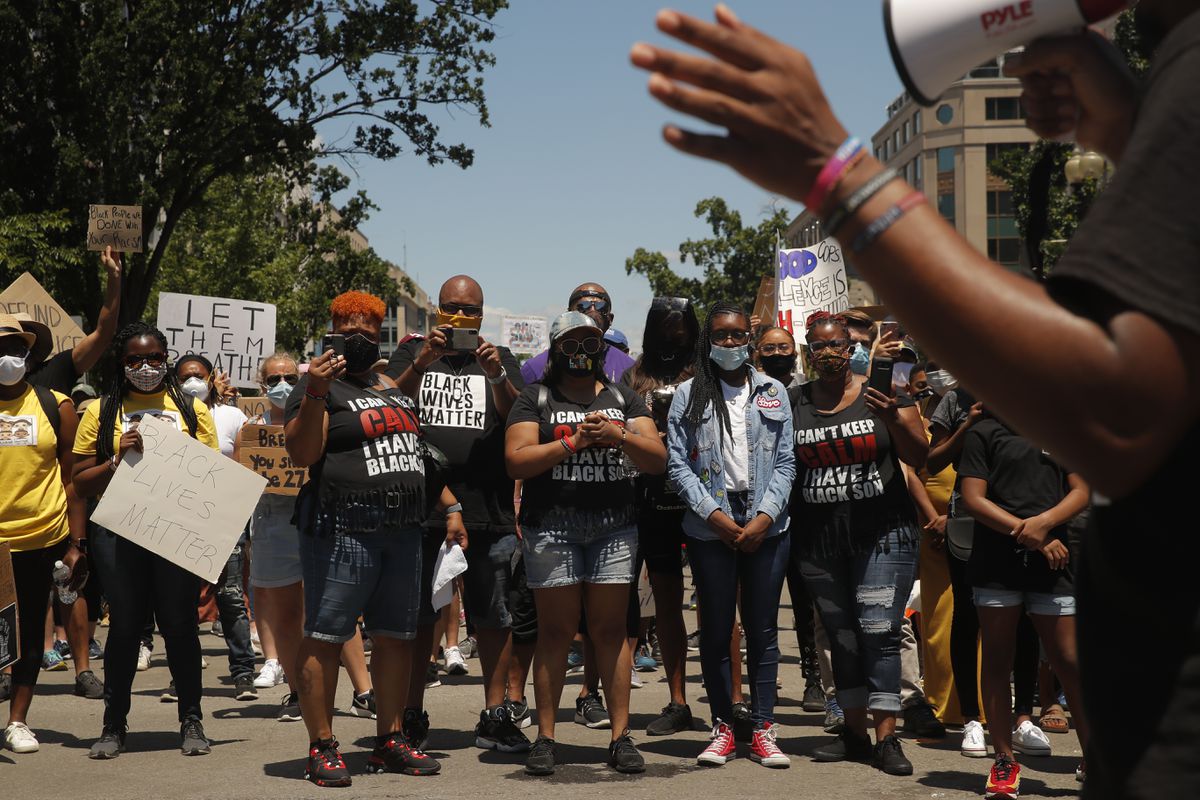 Demonstrators protest Sunday, June 7, 2020, near the White House in Washington, over the death of George Floyd, a black man who was in police custody in Minneapolis. Floyd died after being restrained by Minneapolis police officers on Memorial Day. (AP Photo/Maya Alleruzzo)

Demonstrators protest Sunday, June 7, 2020, near the White House in Washington, over the death of George Floyd, a black man who was in police custody in Minneapolis. Floyd died after being restrained by Minneapolis police officers on Memorial Day. (AP Photo/Maya Alleruzzo)

WASHINGTON - On Sunday, a day after more than 10,000 protesters gathered in Washington - the biggest crowd so far in a week of anti-racism marches in the nation’s capital - hundreds of people strolled along newly named Black Lives Matter Plaza near the White House, basking in the early sun and gearing up for yet another planned demonstration.

Sunday dawned as Day 10 since continuing protests against police brutality began May 29 in cities all over the country after George Floyd, a 49-year-old black man, died on a Minneapolis street with a white police officer's knee pressed against his neck.

Just as the ongoing massive demonstrations have become increasingly peaceful in most cities after outbreaks of mayhem in the initial days, Saturday's march in Washington was nonviolent, and the mood of Sunday's early crowd promised more of the same.

As a racially diverse gathering, people of all ages, milled near Lafayette Square along H Street NW and the adjoining stretch of 16th Street rechristened Black Lives Matter Plaza by Mayor Muriel Bowser, parents pushed strollers Sunday and teenagers posed in front of a big cloth sign reading "Black Lives Matter" on the metal fence surrounding the park at Lafayette Square, in front of the White House.

Just west of that sign, David Inoue spoke into a microphone as people recorded him on their phones. Several members of his Japanese-American organization, Tsuru for Solidarity, stood behind him holding paper cranes meant to symbolize peace.

"Where is the law and order," Inoue asked, "when we see black men killed by those sworn to protect ... and serve us?"

Then his group started handing out paper cranes to passersby and hanging some of them on the eight-foot-high black fence, erected by federal authorities last week to keep protesters from entering Lafayette Square. They folded roughly 1,000 cranes, believing it means they will be granted a wish: an end to violence against marginalized people.

Not far away, a dozen white Quakers sat silently in a circle on the pavement in front of a sign that read, "End white silence."

Gary Harvey and Laurie Corkey, from Reston, Virginia, rested nearby with an identical sign. This was their first day protesting near the White House. "The more peaceful - and especially, white - protesters, the better," Corkey, 64, said. "I think the black community has carried it largely alone for too long."

Meanwhile, despite the enormous crowd that massed near the White House on Saturday, President Donald Trump sought to downplay the gathering while announcing he was decreasing the heavy presence of federal crowd-control forces on D.C. streets.

"I have just given an order for our National Guard to start the process of withdrawing from Washington, D.C., now that everything is under perfect control," Trump said in a Sunday morning tweet. "They will be going home, but can quickly return, if needed. Far fewer protesters showed up last night than anticipated!"

As he tweeted those words, more demonstrators were headed toward the White House. About 11 a.m., Michael A. Jackson pressed his face against the metal fence at Lafayette Square and sang "America (My Country, 'Tis of Thee)" in the direction of the White House.

"From every mountainside, let freedom ring!" he sang, as bystanders cheered and clapped. Jackson, vice president of the Georgia Avenue Business Improvement District and Development Corporation, said he came downtown to send a public message that George Floyd's killing was unacceptable in a nation that stands for freedom and democracy.

Jackson gestured toward the new barrier at the park and borrowed from President Ronald Reagan's 1987 speech about tearing down the Berlin Wall. "Mr. Trump," Jackson said, "take this fence down and heal this nation."

Wickham's statue came down shortly before 11 p.m., following a day and night of otherwise peaceful protest in Virginia's capital - the former capital of the Confederacy. Police removed the toppled statue for safety reasons, Richmond police spokesman Gene Lepley said in an email Sunday.

There were no injuries or arrests related to vandalism of the monument or the larger protest, Lepley said. City police have warned demonstrators that toppling heavy metal statues could injure those in the crowd.

Most of the demonstrators had dispersed when the statue was toppled, the Richmond Times Dispatch reported.

The monument stood in Monroe Park, in the center of the Virginia Commonwealth University campus. That is more than a mile from the towering statues of Robert E. Lee and other Confederate figures memorialized on Monument Avenue.

Gov. Ralph Northam vowed last week to remove the Lee sculpture, the only Monument Avenue statue owned by the state. Richmond Mayor Levar Stoney and members of the City Council announced that they would support an ordinance to remove of the other four Confederate tributes on the avenue.

Wickham's statue was erected in 1891. A cousin to Lee who grew up on a Hanover farm, Wickham practiced law and was a member of the House of Delegates and state Senate. Wickham voted against secession in 1861, according the Hanover County Historical Society.

In Washington, after initial nights of tension between protesters and law enforcement, no arrests were made in the city during Saturday night's protests, Bowser said in an interview with "Fox News Sunday's" Chris Wallace.

"What we saw last week was basically an invasion of our city," Bowser said. "Active duty Army troops moved from all points around the country to threaten our autonomy. What you saw - and I won't have it reduced to a spat - was how I have to defend out taxpayers."

Bowser rebuffed criticism that she had evicted the Utah National Guard from a hotel, saying that it was up to the U.S. Army to pay the housing bills of its troops.

“We did insist that D.C. residents don’t pay the bills for troops we didn’t request,” she told Wallace. “I understand the Army has worked out all payment arrangements.”