In reversal, Texas and Florida order bars to shut, restaurants to scale back as coronavirus cases surge 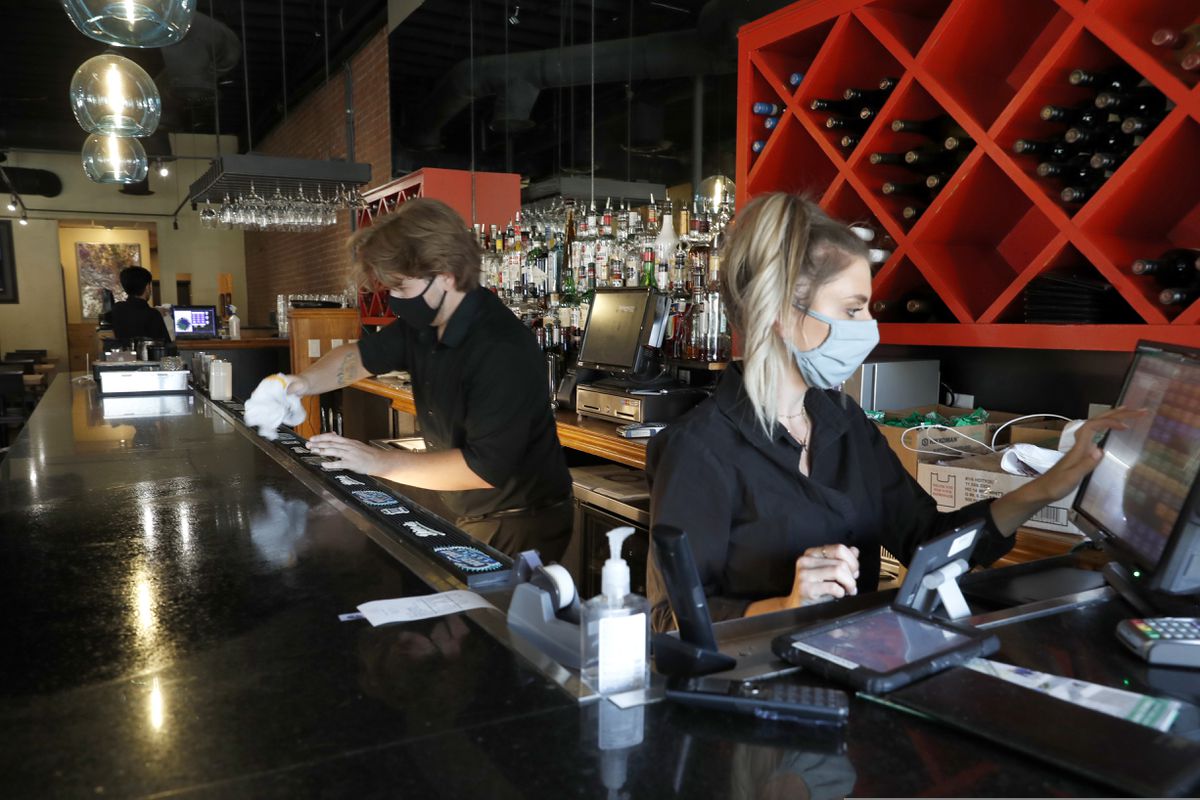 Deep Sushi restaurant employees Jordan Arrowood, left, cleans the bar top as Carrie Souza enters an order at the sushi restaurant in the Deep Ellum entertainment district in Dallas, Friday, June 26, 2020. Texas Gov. Greg Abbott announced Friday that he is shutting bars back down and scaling back restaurant capacity to 50%, in response to the increasing number of COVID-19 cases in the state. (AP Photo/Tony Gutierrez)

Deep Sushi restaurant employees Jordan Arrowood, left, cleans the bar top as Carrie Souza enters an order at the sushi restaurant in the Deep Ellum entertainment district in Dallas, Friday, June 26, 2020. Texas Gov. Greg Abbott announced Friday that he is shutting bars back down and scaling back restaurant capacity to 50%, in response to the increasing number of COVID-19 cases in the state. (AP Photo/Tony Gutierrez)

HOUSTON — In a major reversal, the Republican governors of Florida and Texas rolled back their states’ aggressive reopenings Friday — which President Donald Trump had touted as successful national models —ordering bars to close and restaurants to reduce capacity as coronavirus infections surged.

Florida banned alcohol consumption at bars as new coronavirus cases neared 9,000, almost double the previous record set two days ago. The state has reported 111,724 COVID-19 cases since March, more than a fifth of them this week, and 3,327 deaths as of Thursday.

Florida officials attributed the new outbreak to young people crowding bars that reopened three weeks ago at half capacity, although many patrons ignored social distancing restrictions. The state's seven-day average for positive COVID-19 tests has tripled since the start of the month to 13.4%.

Infections have risen dramatically across the nation following business reopenings and protests that began last month after the police killing of George Floyd in Minneapolis.

In Texas, where Vice President Mike Pence was scheduled to visit Sunday for an indoor "Celebrate Freedom" event at a 14,000-member Dallas megachurch, Republican Gov. Greg Abbott announced he was effectively closing bars and reducing restaurant capacity from 75% to 50%.

Democrats leading the state's largest counties and cities have been pressuring the governor to reopen more slowly, to no avail.

Dallas County's chief executive, Clay Jenkins, called on Abbott to limit public gatherings of 10 or more people ahead of the Fourth of July, noting the event that Pence planned to attend was "not really safe, but they have a right to do it."

"We'd all be better served if those leading the response were at their desks working their butts off instead of holding events," Jenkins said.

"This virus is out of control in Houston," said Marvin Odum, former Shell Oil president serving as Houston's COVID-19 relief and recovery adviser.

Houston's infection rate has tripled during the last three months, with eight deaths Friday, for a total of 216. The average age of those testing positive has fallen from 50 to 40, officials said.

As concern mounted about large gatherings at parks and beaches this summer, Abbott on Friday ordered rafting and tubing outfitters to close and said outdoor gatherings of 100 or more must be approved by local government.

The announcement came less than two months after Texas began a phased reopening that Trump and other Republicans highlighted among the country's earliest and purportedly the most effective. But as cases increased this month, leaders in the state's largest cities and counties imposed mask requirements and lobbied for statewide restrictions to slow the virus's spread.

Texas has reported more than 135,000 coronavirus cases and at least 2,317 deaths, mostly in the counties including Dallas and Houston. More than 17,000 new COVID-19 cases were reported in the last three days and a record number of positive tests — 5,996 — on Thursday. Hospitalizations also set a record, and Abbott suspended elective medical procedures in the state's major cities to increase hospital capacity. The state infection rate reached 12%, a red flag that Abbott said led him to slow the state's reopening.

"As I said from the start, if the positivity rate rose above 10%, the state of Texas would take further action to mitigate the spread of COVID-19," Abbott said in a Friday statement. "At this time, it is clear that the rise in cases is largely driven by certain types of activities, including Texans congregating in bars. The actions in this executive order are essential to our mission to swiftly contain this virus and protect public health. We want this to be as limited in duration as possible."

Abbott urged people to stay home, warning that a "massive outbreak" is sweeping through Texas. He didn't say when the newly imposed restrictions would be lifted.

City and county leaders in Houston, Texas' largest city with a population of about 4 million, announced that they had reached the worst COVID-19 threat level. Texas Medical Center, billed as the largest in the world, was expected to fill in days; a local arena was on standby for overflow. They called on Abbott to reinstate a stay-at-home order last invoked in March.

"We find ourselves careening into an overwhelming and catastrophic situation," said Lina Hidalgo, chief executive of Harris County, which includes Houston.

Hidalgo appeared visibly upset as she explained that the latest report on public health data "begs for aggressive and sustained action," that it took weeks to flatten the curve of infections this spring, and now "we may not have weeks."

Local officials have required people to wear masks at Houston-area businesses, and violating the order carries potential fines. Hidalgo also announced a local ban Friday on public gatherings of more than 100 people through the Fourth of July. But she noted it was not within her power to issue a stay-home order — only the governor could do that, and she asked him repeatedly to do so.

"What works is a stay-home requirement. What does not work is the status quo," Hidalgo said, calling anything in between "a gamble and an experiment on our own people" that is "setting us up for failure."

She said that the state had reopened too quickly and that other parts of the country should learn from Texas' mistake.

"Consider us the canary in the coal mine," Hidalgo said. "There are no shortcuts to getting around the crisis."

Arizona and Florida have seen similar COVID-19 spikes after reopening this spring.

Florida Gov. Ron DeSantis, who had been downplaying the widening outbreak, changed his tone this week, promising state agencies would crack down on those violating COVID-19 restrictions. But like the Texas governor, DeSantis stopped short of requiring residents to wear masks or stay home.

Speaking at Gulf Coast Medical Center in Fort Myers on Friday, the governor said trying to police such mandates "would backfire."

Some Florida cities and counties already have required masks inside public buildings. DeSantis said those decisions are up to local officials.