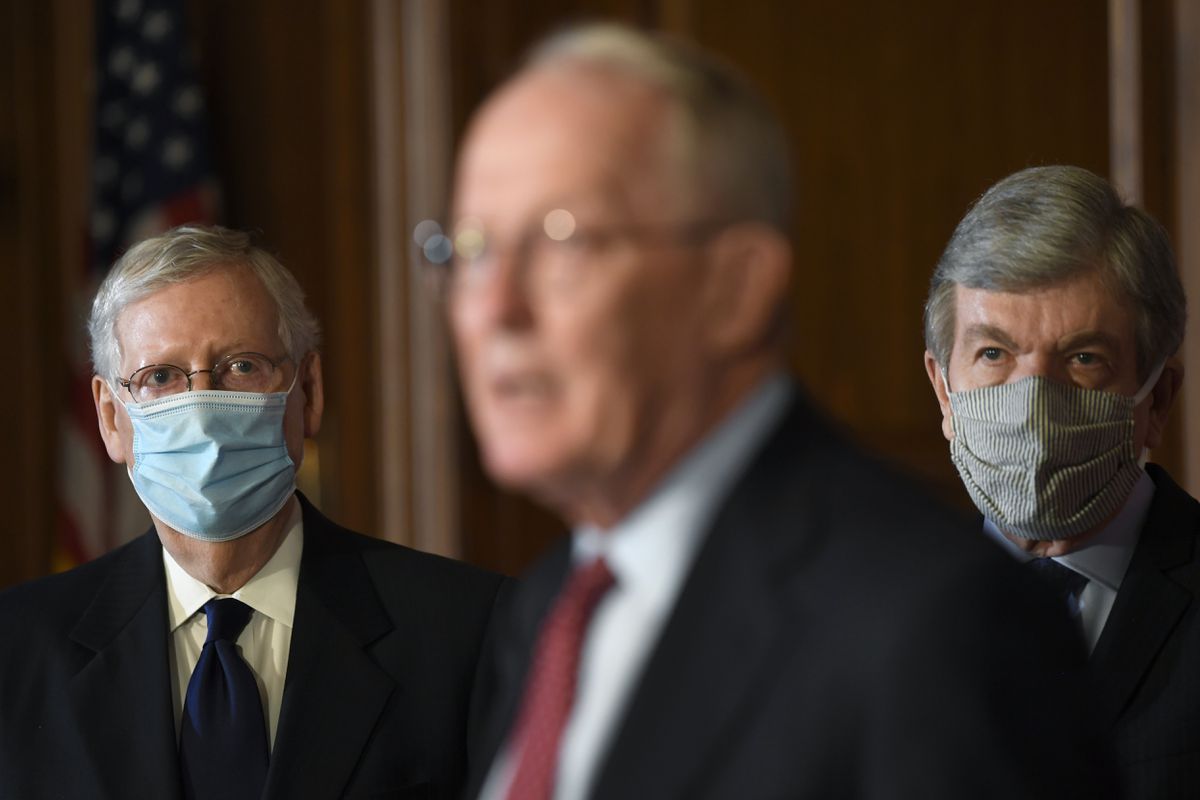 Senate Republicans' legislation, titled the "HEALS Act," is expected to prompt negotiations with congressional Democrats, who have already vowed to oppose many of the provisions in the Republican plan. House Democrats in May approved a $3 trillion coronavirus response package that differs from McConnell's bill in key ways, leaving the path toward a final compromise unclear on many key questions.

The GOP legislation left out some White House priorities, such as the president's demand for a payroll tax cut, but includes more than $100 billion for U.S. schools; a liability shield to protect businesses from coronavirus-related lawsuits; another round of direct stimulus payments; a new round of funding for the Paycheck Protection Program, as well as more money for emergency business loans; and a reduced extension of emergency federal unemployment benefits, among other measures.

The legislation is also notable for what it leaves out: The GOP opted against including new funding for state and local governments; student debt relief; and hazard pay for essential frontline workers, among other policies pushed by congressional Democrats.

Here is a rundown of the key components of McConnell's bill - and how they compare to what House Speaker Nancy Pelosi, D-Calif., has approved.

In March, Congress approved a $600-per-week increase in unemployment benefits to help Americans who lost their jobs amid the pandemic. More than 20 million people are receiving these benefits, but they are set to expire at the end of this month.

The current benefits can in some cases amount to more than what workers were making in their old jobs, leading Republicans and business leaders to push for curbing them after their expiration. Under the plan released by Senate Finance Chair Chuck Grassley, R-Iowa, states would have until October to switch over to the new system in which workers would be paid 70% of their prior earnings. Until then, the federal government would provide a $200-per-week benefit for each jobless worker - down from the $600 it is currently providing. States "unable" to provide the more targeted form of benefit by Oct. 5 can ask the Department of Labor for a waiver to continue the flat payment for an additional two months, the proposal states.

Grassley's provision puts a cap on how much of prior income the new unemployment benefits will make up, to avoid larger sums from being paid out by the government to unemployment recipients. The legislation proposes capping at $500 the payments kicked in by the federal government, which means workers in some states earning as little as $50,000 annually would hit the cap on wage replacement and not be compensated up to that amount, according to Ernie Tedeschi, who served as an economist at the Treasury Department during the Obama administration.

State unemployment offices have been overwhelmed while trying to approve the more simple $600 bonus, and are expected to struggle with implementing the new system effectively.

This additional benefit comes on top of unemployment benefits already paid by the state, which vary but generally replace 45% of a worker's wages.

Congressional Democrats have called for a full extension of the $600-per-week benefit. Pelosi has said she will make that amount her starting point in negotiations with Republicans. Democrats have also rejected the GOP's proposed switch to calculating unemployment benefits, expressing concern that overwhelmed state agencies will be unable to handle the change.

The stimulus package also includes a second round of direct payments to tens of millions of American households.

In March, Congress approved $1,200 stimulus payments for individuals, money that has been sent to as many as 159 million U.S. households. The size of the benefit diminished or disappeared entirely for those who earned more than $75,000 in 2019. Republican lawmakers had considered restricting the number of people receiving the benefit, but Grassley's proposal follows the same formula and sends payments over the next several months to largely the same set of people as the first round of checks.

There are some new restrictions in the GOP plan, such as blocking dead people and prisoners from receiving the benefits and tweaking the eligibility of dependents so they can access a $500 supplement even if the dependents are older than 17.

House Democrats' package also calls for another round of $1,200 stimulus payments. Democrats' legislation would make the benefit bigger by providing families with an additional $1,200 for reach child for up to three children, whereas the initial bill approved in March gave families only $500 per child.

The stimulus payments represent a rare area of bipartisan agreement in which action is likely in final legislation.

The Senate bill includes a five-year "liability shield" aimed at preventing businesses, universities, schools and hospitals from being sued over coronavirus-related damages. McConnell has called the provision a "red line" in negotiations and insisted he would not sign a stimulus package without it.

A summary of the legislation circulated by McConnell's office this month said that under his proposal, plaintiffs would be required to prove both gross negligence and violation of state and local public health guidelines to sue successfully. The measure would also give federal courts jurisdiction over lawsuit claims related to the pandemic.

Congressional Democrats have criticized the liability shield and said it could give large employers the ability to escape damages from mistreating their workers and customers.

The path forward for a compromise on this provision is unclear.

For city, county and state leaders, the GOP plan offers minimal relief. It contains no new dollars, despite months of pleas from local government leaders who sought as much as $1 trillion in new federal aid.

Instead, Senate Republicans will allow municipalities and their states to use an existing $150 billion - approved as part of the last coronavirus relief bill - in a more flexible manner. For the first time, local governments could put some of this money to use to close their massive budget deficits, something the Cares Act currently prohibits. Giving states greater flexibility with the money is opposed by some conservative Republican lawmakers, with Sen. Rick Scott, R-Fla., arguing that doing so will lead to states wasting federal funds.

The money can only be put to use to cover shortfalls relative to the 2019 fiscal year. States also cannot use the program to cover their gaps unless they have distributed at least 25% of their allocations to "downstream" governments, such as cities and counties. The requirement seeks to remedy concerns that states hoarded their original allotments of Cares Act dollars to cover their own coronavirus expenses after Congress did not institute a mandate in the law and the Treasury Department issued confusing guidance on how to implement it.

House Democrats approved $1 trillion in new funding for states, cities, and U.S. territories in the HEROES Act. Senate Republicans also seek to prohibit the money from being put to use to cover pensions liabilities after Trump and other GOP leaders expressed concern that Democrat-led states sought more federal aid for such purposes.

The GOP bill includes $105 billion for education, with $70 billion targeted to K-12 schools. Of that, two-thirds of the funding would be reserved to help schools to reopen for in-person instruction. To get the funding schools would have to meet certain "minimum opening requirements" established by their states. Trump has demanded that schools open fully for the fall term, even as coronavirus cases spread. He's threatened to pull federal funding from those who do not. He does not have the power to do that, but he has insisted that new funding be tied to schools reopening.

The measure also includes $29 billion higher education, and $5 billion would go to governors to distribute to schools. Another billion is targeted to the Bureau of Indian Education and outlying areas.

The package also authorizes one-time emergency funding for state scholarship programs, which help families pay for private school tuition and other expenses. Education Secretary Betsy DeVos has campaigned for a tax credit for people who donate to these funds; this measure does not go that far. A Senate GOP aide said this fund would get 10% of the $70 billion.

Trump administration officials and GOP lawmakers are including a second round of funding for the Paycheck Protection Program (PPP), the small business rescue approved by Congress in March. The initial PPP has sent more than $500 billion in primarily forgivable loans to businesses across the country, and more than $100 billion remains unspent in PPP money that Congress has already approved.

But pressure has increased for lawmakers to approve another round amid signs of stress on the economic recovery, with evidence that many firms who avoided layoffs because of the PPP money will need additional federal assistance. The program also faced some criticism, including from members of Congress, for benefiting large firms such as the National Basketball Association's Los Angeles Lakers and Shake Shack, though many of the most controversial loans were repaid promptly.

The proposal includes $190 billion to support second loans for PPP recipients. The bill would address some of these criticisms by mandating that only firms with 300 or fewer employees can qualify, and requiring firms to demonstrate that their revenue fell by at least 50%.

Additionally, the package includes a separate and new pot of funding - totaling $100 billion - to provide long-term loans to seasonal businesses and businesses located in "low-income census tracts," according to a summary of the legislation provided by the office of Sen. Marco Rubio, R-Fla. These loans would be quite large, at up to twice a borrower's annual revenue up to $10 million, and only accrue interest at 1 percent.

Rubio and Sen. Susan Collins, R-Maine, who sit on the small business committee, led the proposal.

Health funding. Senate Republicans are also proposing an additional $16 billion in funding for testing funding, $16 billion for the National Institutes of Health, and $3 billion for the Centers for Disease Control in their efforts to contain the virus.

Under a measure led by Sen. Tim Scott, R-S.C., the legislation offers a 100% deduction on business meals through the end of 2020. Trump and White House economic adviser Larry Kudlow have pushed the measure as a way to encourage people to support hard-hit restaurants. Experts have noted that few businesses are paying for their employees to eat out during the pandemic.