Trump again says he may not abide by election results 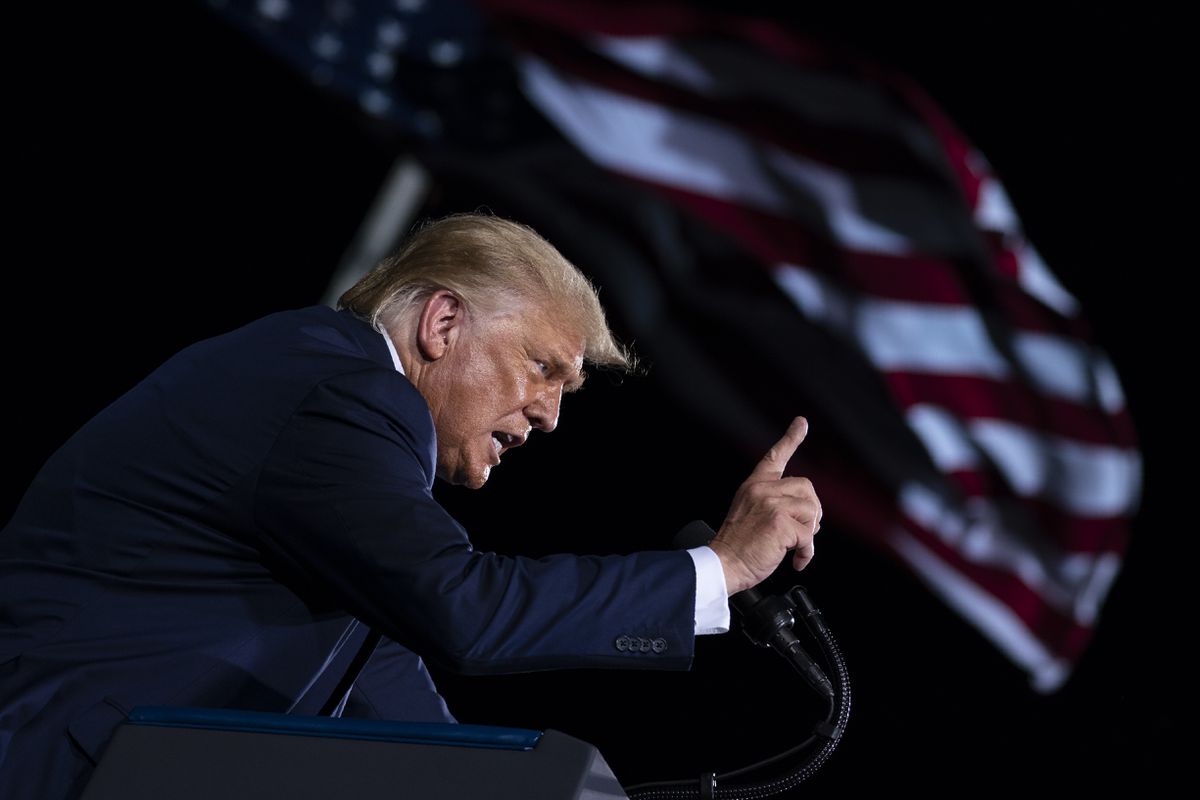 WASHINGTON - President Donald Trump reiterated Thursday that he may not honor the results should he lose reelection, reaffirming his extraordinary refusal to commit to a peaceful transition of power and prompting election and law enforcement authorities nationwide to prepare for an unprecedented constitutional crisis.

Trump escalated his months-long campaign to undermine the legitimacy of the Nov. 3 election with a series of comments Wednesday that, taken together and at face value, pose his most substantial threat yet to the nation’s history of free and fair elections.

In recent days, the president cast doubt on the integrity of vote totals. He said he might not accept the results if they show him losing to Democratic nominee Joe Biden. He said it was imperative to quickly fill the Supreme Court vacancy created by the death of Justice Ruth Bader Ginsburg because the nation’s high court could determine the winner of the election.

And when asked directly whether he would commit to a “peaceful transition of power,” Trump responded, “We’re going to have to see what happens.” He went on to suggest that authorities “get rid of the ballots,” an apparent reference to the huge uptick in votes cast by mail amid the coronavirus pandemic, adding that, if they did, “there won’t be a transfer [of power], frankly. There will be a continuation.”

Trump reaffirmed his views Thursday, saying on Fox News Radio that he would agree with a Supreme Court ruling that Biden won the election but that short of a court decision, the vote count would amount to “a horror show” because of fraudulent ballots. There is no evidence of widespread fraud.

Later Thursday, as he left the White House for a campaign rally in North Carolina, Trump reiterated to reporters, “We want to make sure the election is honest, and I’m not sure that it can be.”

Trump’s running commentary about an illegitimate vote reverberated from coast to coast. Many of Trump’s Republican allies in Congress, including Senate Majority Leader Mitch McConnell, R-Ky., issued perfunctory statements declaring that the winner of the Nov. 3 election would be inaugurated on Jan. 20 - an orderly transition as there traditionally has been in the United States.

Democratic state attorneys general strategized among themselves on what to do if the president refuses to accept the result and said they were most concerned that his drumbeat of unfounded accusations about fraud could undermine public confidence in the election.

“If there’s one thing that I’ve learned in suing Trump and his administration dozens of times, it’s that when he threatens to cross democratic boundaries and constitutional norms, he usually does - and when he denies it, it often turns out he was actually doing it all along,” said Virginia Attorney General Mark Herring, a Democrat.

Meanwhile, state election officials said they were considering what federal resources Trump might seek to deploy before and during the election - such as the president’s statement last month that he would send U.S. attorneys, sheriffs and other law enforcement officers to polling places.

Biden at first dismissed Trump’s Wednesday night comments with mocking incredulity. “What country are we in? I’m being facetious,” he told reporters Wednesday evening. “Look, he says the most irrational things. I don’t know what to say.”

Though the former vice president for months has warned that Trump might do something to jeopardize the integrity of the election - he said in June that Trump stealing the election was “my single greatest concern” - he also has avoided amplifying the president’s baseless claims in an apparent effort to maintain public confidence in the election.

On Thursday, the Biden campaign highlighted the massive election protection program it has quietly been building that includes thousands of lawyers and other volunteers and has been preparing for litigation during and after the election.

“The Biden campaign has assembled the biggest voter protection program in history to ensure the election runs smoothly and to combat any attempt by Donald Trump to create fear and confusion with our voting system, or interfere in the democratic process,” campaign spokesman Michael Gwin said in a statement. “We’re confident that we’ll have free and fair elections this November, and that voters will decisively reject Donald Trump’s erratic, divisive, and failed leadership at the ballot box.”

There was a growing recognition Thursday that Trump’s challenges to the legitimacy of the election could be decided in the courts.

The Supreme Court is poised to be reconstituted with Trump’s personal imprint, as Republicans move quickly to fill Ginsburg’s vacant seat before the election with what would be a third Trump nominee - cementing the court’s ideological shift to the right. It is unclear how the Supreme Court - which 20 years ago effectively awarded the presidency to George W. Bush as part of a legal dispute over the vote in Florida - might rule on a challenge brought by Trump.

“For the first time in my life, and maybe for the first time since the Civil War, the fate of constitutional democracy in the United States is on the line, and it’s on the line because the president has put it there,” said William Galston, chair of the Brookings Institution’s Governance Studies Program. “It is a clear and present danger.”

State election officials said they are alarmed by the president’s rhetoric.

“Categorically and emphatically, when you have public officials casting doubt on the process, it’s incredibly corrosive,” said Maine Secretary of State Matthew Dunlap, a Democrat. “I cannot describe that with enough vehemence. It’s nearly a criminal or treasonous act. We hold a sacred trust, and it is our job to make people feel like they’re protected in their decision-making, as the authors of our future.”

Dunlap said he is trying to prepare for every problem he can imagine, including the possibility that disinformation could be spread by foreign powers - or by Trump himself - while voting is underway or while ballots are being counted, or the possibility that protesters or armed groups show up at polling places.

“I view myself as a shortstop in baseball,” Dunlap said. “You really have no idea what’s going to come at you - but you have to be prepared to field it.”

Voters interviewed in Michigan, Indiana and North Carolina expressed uncertainty about whether mail-in ballots would be counted and dismay about the president’s willingness to challenge the results.

“I’m afraid he’ll do whatever he wants,” Socorro Herrera, 36, who is unemployed, said as she cast her ballot Thursday in Waukegan, Ill., a community north of Chicago. “I’ve never seen a president not be OK with the results. How is that possible? At this point, it seems he can do anything.”

In Warren, Mich., voters expressed similar disbelief. “To go against all norms, that’s what upsets me,” said Deborah Grimaldi, 66, a retired sewing machine operator. “It’s like he wants to be a king or a monarch.”

The Justice Department, which traditionally has sought to keep a modicum of independence from politics, on Thursday announced an inquiry into nine discarded ballots found in Luzerne County, Pa. - a move that Trump and his aides quickly seized upon as evidence of an alleged Democratic plot to rig the election.

At a hearing Thursday before the Senate Homeland Security and Governmental Affairs Committee, FBI Director Christopher Wray said that while there are small local instances of mail-in ballot fraud, “we have not seen, historically, any kind of coordinated national voter fraud effort in a major election, whether it’s by mail or otherwise.”

The FBI director - seemingly aware that his comments last week about Russian election interference had angered the president - said he was “in no way minimizing” any threat to ballots. But changing the outcome of a federal election, he said, “would be a major challenge for an adversary,” adding that the FBI “would investigate seriously” if it saw indications of such an effort.

Republican lawmakers did not give much credence to Trump’s remarks, with some senators characterizing them as stray comments from a president without a filter.

But those assurances did little to quell growing fears among state election officials, state attorneys general and other institutionalists who worried that the president’s words would have far greater impact.

“His statement is political theater at its most destructive,” said North Carolina Attorney General Josh Stein, a Democrat. “He and the Republican Party need to respect our democracy instead of trying to undermine it.”

Several Democratic officials said privately that they were less concerned that the country’s electoral and judicial systems would allow Trump to remain in office if he refused to concede. And they played down the possibility that Trump could somehow subvert the electoral process - such as by declaring victory before counts are complete, seeking a court decision to toss mail ballots or encouraging Republican-controlled legislatures to appoint their own electors - even as they said they were preparing for those possibilities.

“No candidate can declare that the count is just over,” said Wisconsin Attorney General Josh Kaul, a Democrat. “All lawful votes will be counted. It is the voters in Wisconsin who select who the winner of the presidential race is in Wisconsin. Any attempt to interfere with that process would be unlawful.”

Kaul said the legal disputes that lawyers from both parties are preparing to wage after the election are likely to focus on what ballots should and should not be counted. But for such a dispute to decide the election, the vote margin in that state would have to be narrow, he said.

State election officials said they were bracing for legal battles and civil unrest to follow. In North Carolina, the State Board of Elections is preparing to relocate its Election Day operation to the state’s Emergency Operations Center. The state board considered evacuating its workforce on Wednesday after a woman called accusing Democratic board members of trying to steal the election and warning that she and about 1,000 other conservatives were on their way to protest, board spokesman Pat Gannon said.

In Wisconsin, state Elections Commission spokesman Reid Magney said he was on an election security call with federal officials several weeks ago in which an FBI official assured election administrators that any deployment of military or law enforcement for election monitoring would be illegal and would not happen.

Officials in some states said they were preparing for turmoil. Arizona Secretary of State Katie Hobbs, a Democrat, said she has had discussions about how to police voter intimidation in a way that doesn’t make the problem worse.

“One of the conversations we are having is what that response should look like,” Hobbs said. “A uniformed officer with a weapon can look intimidating, and we want to be very careful about that.”