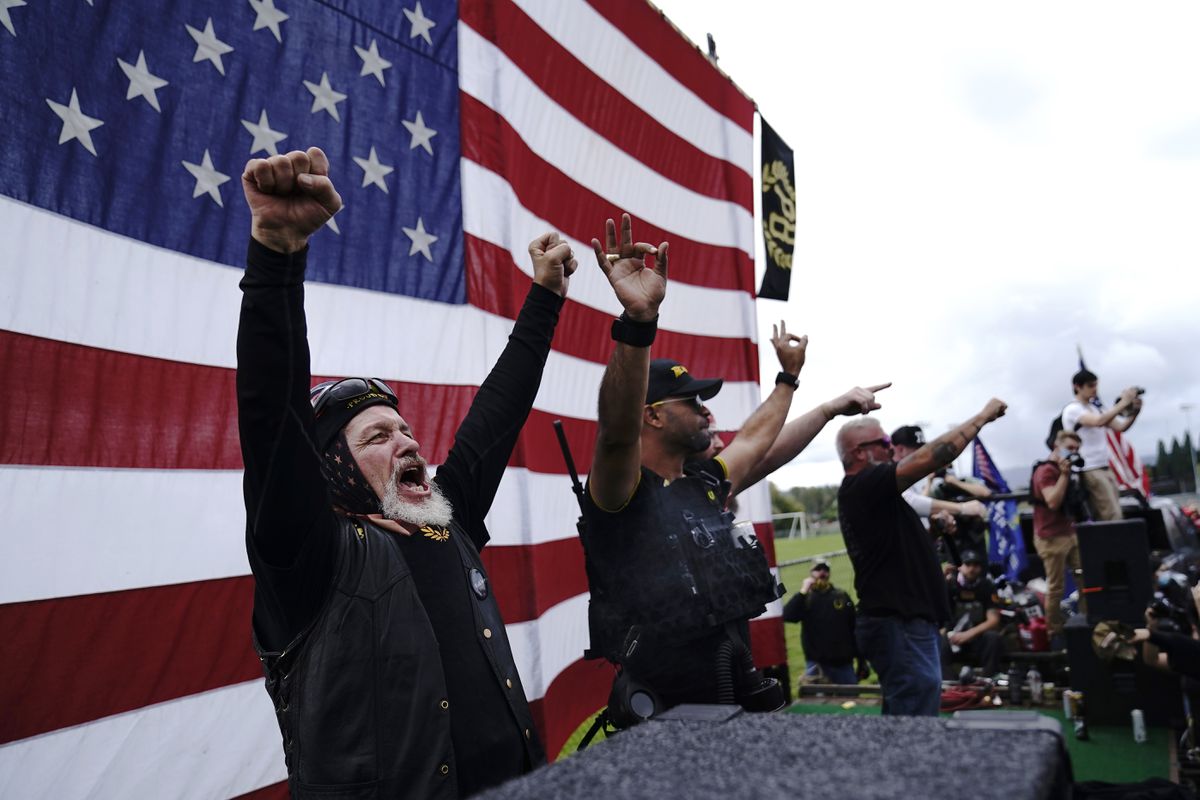 Members of the Proud Boys cheer on stage as they and other right-wing demonstrators rally, Saturday, Sept. 26, 2020, in Portland, Ore. (AP Photo/John Locher)

Members of the Proud Boys cheer on stage as they and other right-wing demonstrators rally, Saturday, Sept. 26, 2020, in Portland, Ore. (AP Photo/John Locher)

CLEVELAND - President Donald Trump refused to condemn white supremacists and armed militia members Tuesday during a bellicose debate in which racism emerged as one of the most contentious issues.

He called out one far-right group, using words that some of its members embraced as a call to arms rather than a denunciation.

“Proud Boys - stand back and stand by,” Trump said after Democratic rival Joe Biden challenged him to condemn far-right supporters who have taken to the streets in recent months brandishing weapons. “But I’ll tell you what, somebody’s got to do something about antifa and the left.”

Trump’s equivocation came during an intense and openly hostile portion of the 98-minute debate, with the two candidates offering sharply different approaches to the issue of racial division.

Trump’s comments playing down right-wing violence and urging the Proud Boys to stand by followed a long pattern of declining to forcefully criticize extremist views within his base. The president claimed there were “very fine people” on both sides of a deadly white supremacist rally in Charlottesville, Va., in 2017 and was hesitant to disavow the endorsement of white supremacist David Duke during the 2016 campaign. More recently, as protests exploded across the nation, he has emphasized, as he did Tuesday, his claims against leftist protesters while refusing to criticize their counterparts on the right.

The exchange came almost an hour into the debate, with moderator Chris Wallace of Fox News asking Trump to directly address his supporters and urge calm.

“Are you willing to condemn white supremacists, and militia groups and to say that they need to stand down and not add to the violence in a number of these cities?” Wallace said.

After initially saying “sure,” Trump said, “I’m prepared to do that, but I would say almost everything I see is from the left wing, not from the right wing.”

Pressed by Biden to directly rein in his supporters, Trump said, “What do you want to call them? Give me a name . . .who would you like me to condemn?”

When Biden said “Proud Boys,” Trump responded by telling the group to “stand back and stand by,” terminology that was seized by both the president’s detractors and members of the group.

“This is not a right-wing problem; this is a left-wing problem,” Trump said, directly contradicting intelligence community officials who have said violence from across the political spectrum has posed a threat to the country.Earlier this month, FBI Director Christopher Wray told Congress that racially motivated extremism makes up the largest share of the FBI’s domestic terrorism cases and that white supremacist ideology appears to drive the bulk of those racially motivated extremism cases.

Still, Trump’s rhetoric was quickly embraced by members of Proud Boys, the so-called Western chauvinist group that espouses pro-Trump, police-friendly rhetoric. Though the group has tried to cast itself as largely peaceful, its members have a reputation for sparking fights with the far left that devolve into mayhem. The Proud Boys say they believe in ending welfare, closing the borders and adhering to traditional gender roles. According to the Southern Poverty Law Center, the group maintains affiliations with extremists and is known for misogynistic and anti-Muslim rhetoric.

On Parler, the platform and social network where numerous extremist groups have moved following crackdowns on Facebook, the chairman of the Proud Boys, Enrique Tarrio, responded to Trump’s remarks by posting, “That’s my president!” Numerous effusive posts followed. “Standing by sir,” he wrote. Another message soon followed: “So Proud of my guys right now.”

Members of the group used Trump’s “stand back and stand by” comments to create and messaging campaign on social media.

A few minutes after the debate, the Proud Boys' main account on Parler had tweeted a video of Trump’s statement. “YES SIR, PROUD BOYS STANDING BY,” it said.

In an interview, Tarrio said he supported Trump’s commentary, a sign that the group’s attempts to achieve legitimacy and recognition got a boost during the first presidential debate.

“When he said the Proud Boys, he said, ‘Stand back, stand by.’ That’s basically what we did in [Portland],” Tarrio said. “We stood back, stood by, while the antifa did what they do and were part of the largest number of mass arrests so far.”

Tarrio added, “It also gives me joy that America sees that we are the ones that are the ones willing to stand back against and do something about domestic terrorism in Portland,” he said.

For Biden, who said Trump’s initial equivocation about attendees at the Charlottesville rally three years ago convinced him to enter the presidential race, the portion of the debate focused on race offered multiple opportunities to directly press the president on what he described as “racist dog whistles.”

Trump, who has run a campaign on stoking many of the country’s racial divisions, turned to many of his familiar talking points during the course of the debate, from law and order to crime in the suburbs to racial sensitivity training.

Biden sought to cast himself as a healer and the president as a divider.

“This is not 1950. All these dog whistles and racism don’t work anymore,” Biden said when Trump claimed that Democrats were trying to destroy the suburbs by building low-income housing. “Suburbs are by and large integrated.”

Asked whether he thought there was systemic racism in the country, Trump sidestepped the question and instead focused on his decision to curtail racial sensitivity training in the federal government. Trump’s administration has taken action against such training, using the argument that it involves reverse racism and discriminates against White people.

“I ended it because it’s racist,” Trump said. “If you were a certain person, you had no status in life - it was sort of a reversal.”

Biden responded by saying that systemic racism did exist and such training helped root it out.

“The fact is, there is racial insensitivity,” he said. “People have to be made aware of what other people feel like.”

Early on in the discussion over race, Trump went on offense, challenging Biden over his support of the 1994 crime bill."You have treated the Black community about as bad as anybody," Trump said to Biden. The former vice president responded by claiming that Trump had done little for Black voters.

Trump also declined to call for his supporters to remain calm in the aftermath of the election, if it is not clear who the winner is on Nov. 3.

“I’m urging my supporters to go into the polls and watch very carefully,” he said, arguing without evidence that cities like Philadelphia are engaged in “bad things” like vote manipulation.

Biden said Trump’s commentary on race was one reason the country needed to replace him with a more unifying president.

“He keeps trying to rile everything up. He doesn’t want to calm things down,” Biden said. “Instead of going in and talking to people and saying, ‘Let’s get everyone together and figure out how to deal with this. What does he do?’ He just pours gasoline on the fire.”

The Washington Post’s Isaac Stanley-Becker contributed to this report.