Why a coronavirus vaccine might not get things back to normal 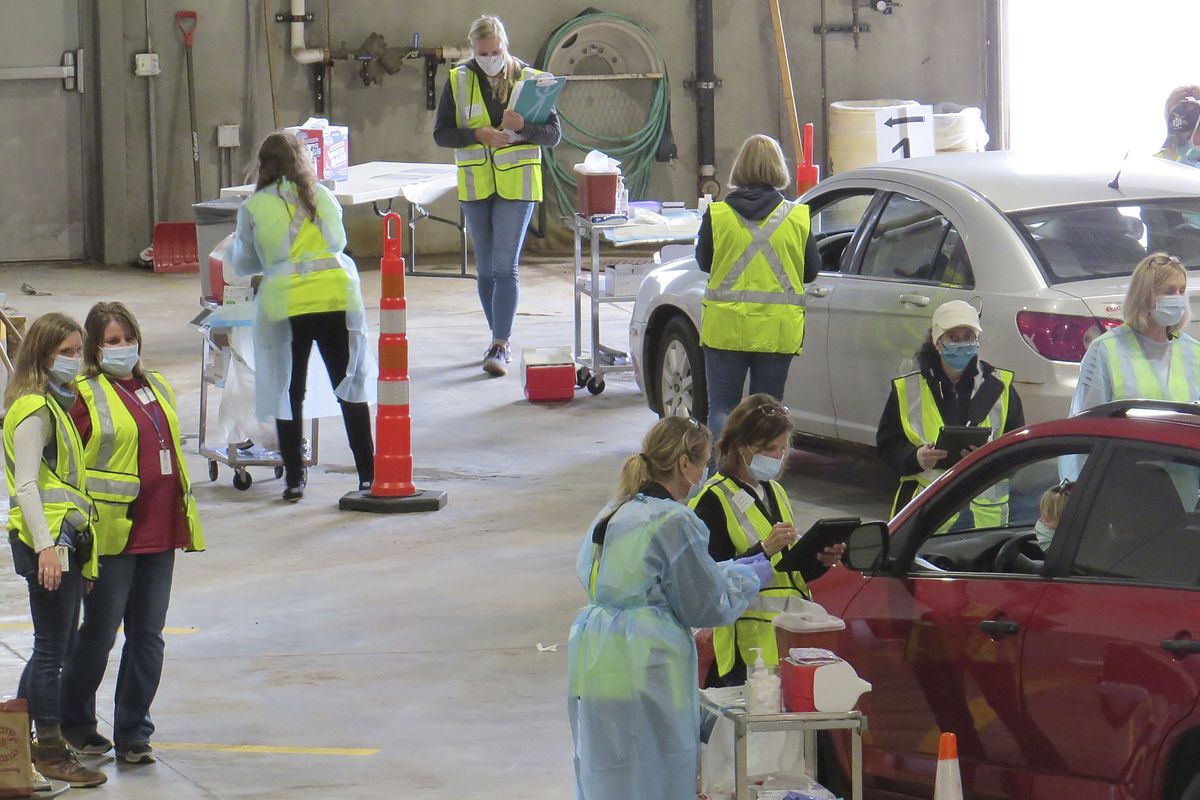 This 2020 photo provided by Carlton County shows their drive-thru flu clinic in Carlton, Minn. The facility is a way to social distance in the coronavirus pandemic, but also served as a test run for the COVID-19 vaccines that county health officials still know little about. (Jared Hovi/Carlton County GIS via AP)

This 2020 photo provided by Carlton County shows their drive-thru flu clinic in Carlton, Minn. The facility is a way to social distance in the coronavirus pandemic, but also served as a test run for the COVID-19 vaccines that county health officials still know little about. (Jared Hovi/Carlton County GIS via AP)

Coronavirus infections are climbing to record highs in Washington state and nationwide. Patients are filling hospitals in some states. Experts fear we’re in for a dark winter.

A shot of hope could be coming, as vaccine makers are deep in clinical trials. Governments are stockpiling doses and preparing for efficient delivery of a vaccine, should one be proven safe and effective.

But over time, the stiffest challenge when it comes to vaccines may not be creating, approving or distributing them. It might be getting people to take them.

Americans' willingness to be vaccinated dropped over the summer, with about half of people polled now saying they’d be reluctant, according to recent surveys. Vaccinating only half the population would likely fall short of stopping transmission of the virus.

Decisions made now, by scientists and by those in political power, could have a lasting effect on whether vaccines succeed in driving out COVID-19 and other diseases.

The U.S. has set its sights on herd immunity, a term describing when a large enough proportion of society is immune from infection and even those without immunity are indirectly protected because the virus cannot be readily transmitted from person to person.

How is “large enough” defined, when it comes to immunity to this coronavirus? Epidemiologists believe it could be around 70% of the population, but there’s little certainty, and it’s a moving target.

This number, known as the herd immunity threshold, is one of the major factors scientists are still puzzling over when it comes to how — or whether — coronavirus vaccines could achieve herd immunity.

The threshold is determined largely by the virus’s transmissibility and how long immunity lasts.

“On average, an infectious person will infect three people,” said Luis Barreiro, an associate professor in genetic medicine at the University of Chicago.

And there are signs people can be infected with coronavirus more than once. Scientists are trying to understand more about these cases of re-infection. If someone who’s had the virus is protected from re-infection for only a few months, then herd immunity is unreachable.

“The virus will become, basically, another like flu, another thing we’ll have to live with,” Barreiro said.

Some politicians, and a few scientists, have called for the U.S. to seek herd immunity without a vaccine — that is, by simply allowing much of the population to get infected, on the hope that those who recover would remain immune. Barreiro dismissed that idea, saying it was “crazy” to allow the virus to spread without control.

“There’s no strategy,” he said.

No vaccine maker has applied for emergency use authorization from the Food and Drug Administration (FDA) — yet. During that process, regulators — and the public — will be able to review safety and efficacy data.

The pharmaceutical company Pfizer indicated in a news release Monday that its mRNA vaccine had shown 90% efficacy in early data and did not present significant safety concerns. More data and details are needed to understand the nature of the protection this vaccine provides, which populations it protects well and whether it provides lasting immunity.

“Nobody yet has actually seen the actual published reports with statistics and numbers,” said Dr. John Dunn, the medical director of preventive care at Kaiser Permanente Washington. If the efficacy data holds up and protection lasts, Dunn said it would be “marvelous.”

A vaccine using the mRNA platform has never been approved, and it’s an encouraging sign that Pfizer’s vaccine — and several others based on the platform — could be effective.

The FDA has long said it wanted vaccines to show at least 50% efficacy, meaning vaccines that prevent infection, disease or transmission in at least half of people who receive them.

But that represents “a low-end threshold to make sure no one is wasting their time,” said Dunn.

Even with an effective vaccine, the math is daunting.

A 90% effective vaccine would likely require at least two-thirds of those susceptible to be vaccinated “to start to see what we think of as herd immunity,” Dunn said, adding that it could require a much higher percentage, even 90%.

Gallup polling released in October found that if a free, FDA-approved vaccine were available now, only half of Americans would agree to get it. And a survey from STAT and The Harris Poll found that 58% said they would get vaccinated as soon as a vaccine was available, a sharp drop since summer polling.

“The rate at which we vaccinate people is critical,” Dunn said. “As the joke goes in medicine: The effectiveness of a vaccine that doesn’t go into someone’s arm is zero.”

Vaccination traces its roots to centuries-old inoculation practices that researchers believe originated in Asia, in which people inhaled dried pustules of smallpox to induce mild infection.

An enslaved man named Onesimus taken from West Africa brought knowledge of the practice to North America and helped quell an outbreak in Boston in 1721.

By that century’s end, researchers had developed a smallpox vaccine. The World Health Organization declared the disease eradicated in 1980 — a public health triumph.

In the United States, vaccines have eliminated polio, which primarily affects children and can cause paralysis, and largely eliminated measles and tetanus, among other diseases.

Vaccines inspire both unbridled optimism and skepticism, said Emily Harrison, a postdoctoral fellow in the history of epidemiology at Harvard University.

Groups have opposed vaccination for religious reasons, over safety concerns, in reaction to colonialism and over concerns about medical experimentation and exploitation.

“Vaccines have often been deployed by authorities with conflicting motives,” Harrison said.

In the early 1900s, for example, as occupying American soldiers in the Philippines became sickened with smallpox, the U.S. Army led a vaccination campaign for the population at the same time it routinely tortured Filipinos during interrogations.

A history of medical exploitation and missteps also has eroded trust among some communities of color in the United States, said Abigail Echo-Hawk, chief research officer for the Seattle Indian Health Board and a member of the Pawnee Nation of Oklahoma.

High-profile technical mistakes also led to reforms. In the 1950s, during what came to be known as the Cutter Incident, some batches of polio vaccine were shipped out containing live virus, which paralyzed dozens of children and killed several.

“I don’t want to scare the public,” Harrison said, adding that the Cutter Incident spawned a comprehensive safety overhaul, government regulations and oversight that continues today.

These safeguards have been negotiated, over time, for public trust.

“Vaccines today are highly regulated, and they need to meet the most rigorous of safety standards,” Harrison said.

Harrison said skepticism of vaccines today is marked by several characteristics: distrust in public institutions; a growing number of people who don’t wish to participate in the common cause; and the influence of social media, where “theatrical, orchestrated disinformation” can thrive.

Kolina Koltai, a postdoctoral researcher at the Center for an Informed Public at the University of Washington, said anti-vaccination proponents have been discussing the novel coronavirus on Facebook since January, before it hit broad mainstream discourse in the U.S.

Koltai, who has studied these groups for about five years, said conspiracy theories have accelerated during the pandemic. Prominent anti-vaccination groups have mixed their messages with QAnon conspiracies and anti-lockdown messages.

The relatively quick pace of vaccine development, the perception of political influence and even the name of the federal vaccine effort — Operation Warp Speed — have also spurred concern among people who typically support vaccines, Koltai said.

“We are seeing people otherwise normally classified as pro-vaccine, who think childhood vaccines are safe, who now have reservations about a [coronavirus] vaccine,” Koltai said. “You almost couldn’t have picked a worse name.”

President Trump has said no president has ever “pushed” the FDA so hard. He’s shared rosy predictions of when a vaccine would be ready and accused the FDA of a “political hit job” for implementing rules that would push the timeline for a vaccine past Election Day.

For some, that’s left an impression.

Anne Jaworski, a 65-year-old retiree from Des Moines who described herself as a “fan of public health” and whose parents met while working on a polio project, said she typically views vaccines with favor but remains “skeptical” of COVID-19 vaccines.

Jaworski distrusts the large pharmaceutical companies at the helm of vaccine efforts and was concerned about political influence over vaccine development and approval.

“It’s the fascist, racist administration, overall. How do you trust that?” she said. “Everybody is a bootlicker for Trump.”

Jaworski now views once “trusted sources” like the FDA and the Centers for Disease Control and Prevention as “pawns in a political game.”

Regulators have rallied to assert independence and provide public reassurance. Peter Marks, director of the FDA’s Center for Biologics Evaluation and Research, promised to resign if politicians fast-walked a vaccine that wasn’t safe and effective.

“This will be an added layer of assurance” for residents “so that we can increase the number of folks that actually get the vaccination,” Inslee said. The state Department of Health is planning a campaign to promote approved vaccines.

Dunn, of Kaiser Permanente, said clear, transparent communication about risks and benefits of each vaccine will be critical. The message should be consistent among doctors and medical organizations, he said.

“Their hesitancy now is going to affect whether their communities are willing to be vaccinated later,” Echo-Hawk said.

A vaccine, at least initially, will be no panacea, and experts shouldn’t make promises they can’t keep, Echo-Hawk said.

Santiago Rodriguez-Anderson, a 31-year-old Burien engineer who grew up in developing countries affected by polio and other diseases, said he’s been dismayed by anti-vaccine messages shared by friends on Facebook.

He fears that the vaccines, as expected, won’t be 100% effective, and that enough people will decline vaccination to miss herd immunity and leave everyone potentially at risk.

“Even if I’m vaccinated, I could catch it,” Rodriguez-Anderson said of this scenario. “That’s a problem. That affects whether or not I can continue to live my life as I’m used to.”