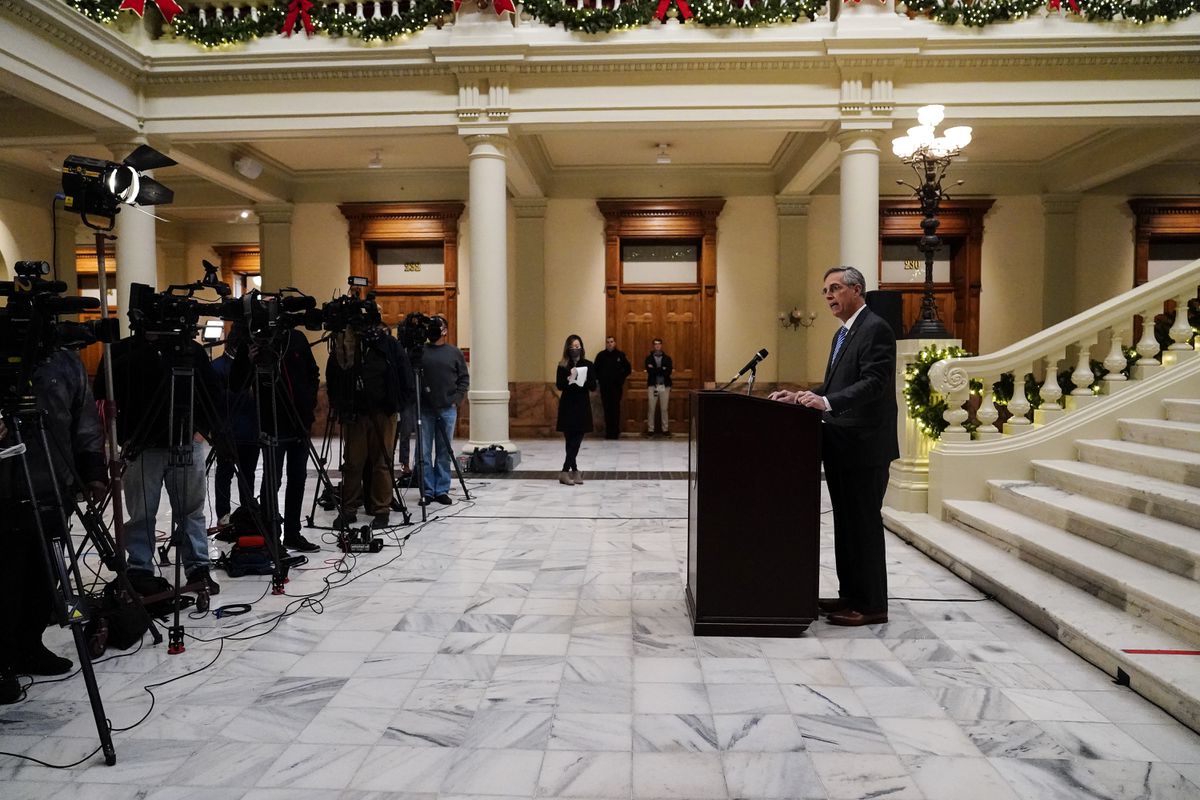 The final results certified by Secretary of State Brad Raffensperger had Biden with 2.47 million votes, President Donald Trump with 2.46 million votes and Libertarian Jo Jorgensen with 62,138. That leaves Biden leading by a margin of 12,670 votes or 0.25%.

Raffensperger said during a news conference Friday that he believes the numbers his office has presented are correct. Now, Republican Gov. Brian Kemp has until 5 p.m. Saturday to certify the state’s slate of 16 presidential electors. Kemp has called a news conference for 5 p.m. Friday.

The hand count affirmed Biden won by more than 12,000 votes out of about 5 million cast, according to data released by Raffensperger’s office Thursday.

“Working as an engineer throughout my life, I live by the motto that numbers don’t lie,” Secretary of State Brad Raffensperger said during a news conference at the state Capitol. “As secretary of state, I believe that the numbers that we have presented today are correct. The numbers reflect the verdict of the people, not a decision by the secretary of state’s office or of courts or of either campaign.”

State law requires Raffensperger to certify the election results by 5 p.m. Friday. Then, Gov. Brian Kemp has until 5 p.m. Saturday to certify the state’s slate of 16 presidential electors.

Kemp announced a news conference for Friday at 5 p.m. The Republican governor hasn’t stepped forward to defend the integrity of this year’s elections amid attacks by Trump and other members of his own party, who claim without evidence that the presidential vote in Georgia was tainted by fraud. Kemp has neither endorsed Trump’s fraud claims nor backed Raffensperger in his assertion that the election was conducted fairly.

Raffensperger’s office stumbled earlier in the day when it prematurely announced the certification while it was still unfinished. Forty minutes later, a corrected news release was sent out saying that the results would be released later. The momentary slip was yet another moment of drama in a race that has been fraught with accusations.

Once Raffensperger certifies the results, Trump’s campaign will have two business days to request a recount since the margin is within 0.5%. That recount would be done using scanning machines that read and tally the votes and would be paid for by the counties, the secretary of state’s office has said.

The hand tally stemmed from an audit required by a new state law and wasn’t in response to any suspected problems with the state’s results or an official recount request. The audit was meant to confirm that the voting machines correctly tabulated the votes.

The hand count produced some slight differences from the previous machine tally, but no individual county showed a variation in margin larger than 0.73%, and the variation in margin in 103 of the state’s 159 counties was less than 0.05%, the secretary of state’s office said. During the audit, several counties discovered previously uncounted ballots and were recertifying their results.

Raffensperger also said Friday that he plans to propose legislative changes aimed at increasing trust in the results, including allowing state officials to intervene in counties that have systemic problems in administering elections, requiring photo ID for absentee voting and adding stricter controls to allow for challenges to voters who might not live where they say.

“These measures will improve the security of our elections, and that should lead to greater public trust,” he said.

Raffensperger, a self-described “passionate conservative,” has endured criticism and insults from fellow Republicans — from the president to the chair of the state Republican Party — over his handling of the election. He acknowledged their feelings on Friday.

But Raffensperger, as he had repeatedly done before, defended the integrity of the process and the results.