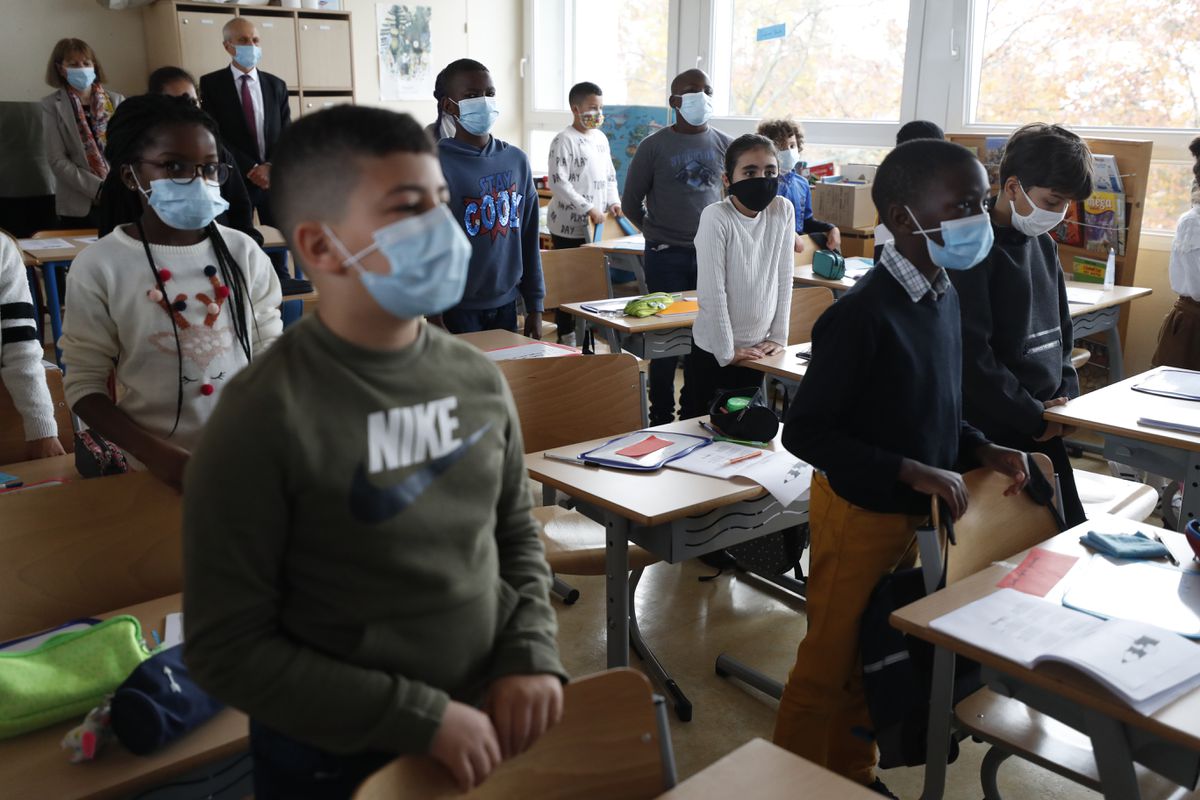 When European schools reopened their classrooms in the spring, after the first wave of the coronavirus had crested, some parents expressed concern their children were being used as “guinea pigs” in a dangerous experiment.

But to the extent that European schools have acted as laboratories for the world, the findings eight months later are largely positive. Most of Europe kept schools open even during a worst-on-the-planet second wave of infections this fall. And still, schools appear to be relatively safe environments, public health officials say. As long as they adhere to a now-established set of precautions - mask-wearing, handwashing, ventilation - schools are thought to have played only a limited role in accelerating coronavirus transmission in Europe.

Those conclusions contrast sharply with the prevailing wisdom in the United States, where public health officials have focused on low rates of positive coronavirus tests in the broader community as a prerequisite for in-person schooling. Some U.S. school districts recently announced they are going remote again, as coronavirus cases rise, and other districts have yet to reopen their classrooms at all.

“It is still difficult for me to understand why schools are closed in the United States,” said Otto Helve, a specialist in pediatric infectious diseases at the Finnish Institute for Health and Welfare who has studied coronavirus transmission in schools. “Schools are not driving the epidemic.”

Though cases among students and teachers have risen along with overall viral levels in their communities, the rate at which the virus has been passed on within classrooms has stayed low and constant - unlike universities, which have emerged as a concern.

In Finland, 20,000 of about 1.2 million students and teachers this school year have been asked to quarantine because of possible in-school exposure, Helve said. But just one percent of that group - about 200 people - has gone on to exhibit any coronavirus symptoms and then tested positive. Not everyone without symptoms gets tested, but based on those who have, another 1% probably has asymptomatic cases of the virus, Helve said.

Skeptics say schools aren’t doing enough testing to have a true sense of how much the virus is spreading. But communities with enough resources to conduct broader testing after possible exposure haven’t typically found many asymptomatic cases hiding among teachers and students. And because most European schools have embraced bubbles, where students and teachers mix only with their class and no one else, thorough contact tracing can be done in schools even when it falters in wider society.

“We are not seeing the tip of the iceberg, we are seeing the whole iceberg, because of our good tracing,” said Quique Bassat, a Spanish pediatrician and epidemiologist who was the coordinator of the Spanish Pediatrics Association’s working group for school reopenings.

In Spain, coronavirus cases were already rising sharply across the country in early September, as classrooms prepared to reopen for the first time since the pandemic hit.

“There were legitimate concerns that perhaps we were fueling the epidemic, and perhaps we were adding more fuel to the fire, and this was going to be the apocalypse,” Bassat said. “To the surprise of many, reopening the schools, applying all these measures in a strict way, controlled transmission, and there were no big outbreaks.”

In Bassat’s region, Catalonia, 87% of initial cases in classrooms did not spread to another person. And among the 13% that did, the “vast majority” spread to only two or three other people in the school, he said.

The virus’s onward spread was limited even though Spain’s positive coronavirus test rate - 13% at its peak in early November, and 10% now - is far higher than the level that many U.S. school districts have said is acceptable for in-person schooling. New York City closed its schools last month after 3% of city tests came back positive, then reversed itself and made plans to resume classes for the youngest grades.

Most Spanish schools have continued without interruption for the youngest age groups, up to about 12. In Spain and elsewhere, high schools have been more likely than younger grades to switch to part-time or full-time remote education, since risks of infection and transmission appear higher among teenagers than among younger children.

Italy is again seeing one of the world’s highest coronavirus death tolls, but it no longer registers as a national tragedy

France, which spiked worse than Spain last month, also saw relatively low numbers in schools. The week of France’s peak last month, 0.1% of students and 0.2% of school personnel tested positive for the coronavirus. Across the country, 142 of 528,400 classrooms quarantined, about 0.03%, while 21 of 61,500 schools went into fuller quarantine, according to data from the education ministry.

Rising infection levels among German children have been sparked nervousness there, but public health experts say that partly reflects a more relaxed approach to safety measures. People between the ages of 15 and 19 have been among the most-infected in Germany in recent weeks, and cases among them tripled between the mid-October and their peak in mid-November - faster than the population at large, which doubled. Chancellor Angela Merkel has called for stricter mask-wearing and smaller class sizes, but those decisions are left up to individual states.

Overall, while some parents and teachers unions continue to have concerns, many European societies are broadly behind efforts to keep students in their classrooms. Advocates of in-person school say the cost of virtual classrooms for vulnerable students is steep, as is the economic toll of taking parents out of the workforce because their young children are at home.

“It’s not that we think schools are no danger, that there’s no effect,” said Steven Van Gucht, the head of viral diseases at the Belgian public health agency. “Schools are the last thing to close, they’re really the last thing on the list. There is political pressure and societal pressure. We consider schooling an absolute priority.”

Austria, the Czech Republic and Italy have been exceptions within Europe, opting for widespread school shutdowns or restricted reopenings amid outbreaks. In Italy, that decision sparked protests from students, who in several cities donned hats and gloves and sat with their laptops outside of their school buildings, saying they have a right to in-person education.

Pandemic measures are significantly less polarized in Europe than they are in the United States, where President Trump has contradicted his own scientific advisers and made reopening society a political loyalty test, sparking backlash among his opponents. Teachers unions, which have emerged as a powerful force of opposition to school reopenings in the United States, have generally been more acquiescent in Europe, pushing for safety measures rather than closures.

And European societies have generally been willing to make sacrifices to keep schools open, such as banning indoor dining, or channeling money for safety measures that in some countries are estimated to cost about $12,000 a month for a school of 1,000 students.

Cristina Trujillo’s English-instruction classroom in the southern Spanish city of Seville now has a carbon dioxide monitor to keep watch over how much exhaled air is building up. Some rooms have had new windows cut into them so that air can flow in from two sides. The school, Colegio Santo Ángel de la Guarda, bought N95 masks for its teachers. Then, when their voices became too muffled, it bought them microphones. They’ll get voice lessons next month to project better. Because students can’t leave books in their classroom overnight anymore - that would get in the way of the thorough disinfection - their load has been lightened by doing work on Chromebooks that the school purchased for the pandemic. The school’s technology coordinator now devotes most of his time to keeping everyone safe: checking carbon dioxide levels, overseeing renovations, buying masks and hand gel.

Keeping the virus in check is “easier in school,” Trujillo said. “Here, the environment is under control.”

As cases mounted across Spain, to levels that at their Nov. 4 peak were comparable to those in the United States, not a single case spread inside the school, officials said. Two teachers and 11 students brought cases into classrooms from outside, but none infected anyone else.

Bassat said he worried less about the risk from in-person education and more about what happens when the country’s 8 million students get a break from it. Spain has three-week winter holidays, and children will stay at home or mix with family and friends. The transition from a controlled to an uncontrolled environment could be perilous, he said.

Policymakers across Europe say students can and do infect each other. Sometimes they bring cases home and infect their families. But even in societies where cases have been off-the-charts, as was the case for Belgium in October, public health officials say they believe cases in schools reflected viral growth in society at large but weren’t a driver of it. One indicator: Incidence of the virus among teachers and students never exceeded that of the country at large.

When Belgium buckled under a second wave where daily cases peaked at 1,536 per million people - more than three times the level in the United States right now - it doubled a preplanned post-Halloween school vacation to two weeks, creating a 14-day-long circuit breaker that built on a broad, nationwide lockdown. Afterward, schools resumed, and infections have dropped for weeks.

“It is very clear to everyone what the downsides are to having school closures,” Helve said. “The downside to closing would need to be compensated by an extremely good outcome in terms of disease control, and it doesn’t seem to do that.”

Birnbaum reported from Riga, Latvia. The Washington Post’s Quentin Ariès in Brussels, Luisa Beck in Berlin, Chico Harlan in Rome and Karla Adam in London contributed to this report.