‘Someone’s going to get killed’: Republican election official in Georgia blames Trump for fostering threats of violence over election 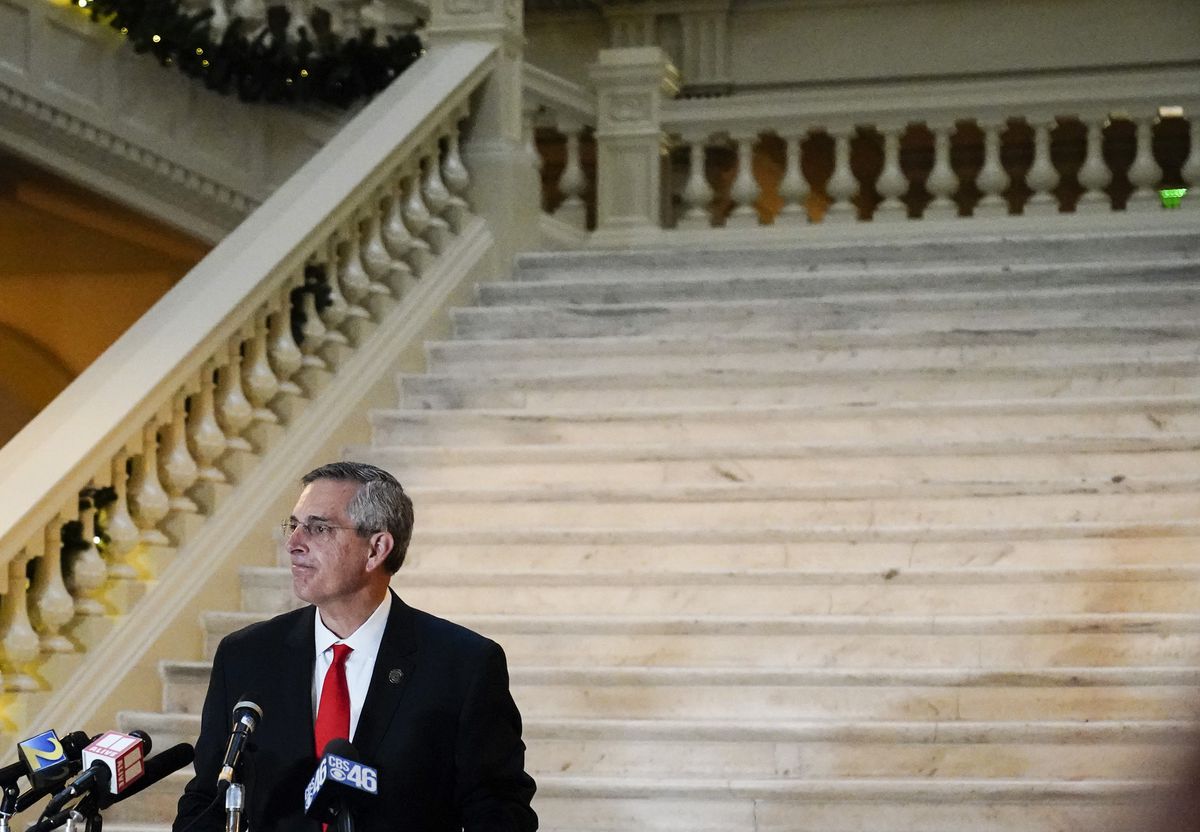 Georgia Secretary of State Brad Raffensperger speaks during a news conference on Monday, Nov. 30, 2020, in Atlanta. He was among the first Republicans to speak out against Trump’s false claims of voter fraud. (AP Photo/Brynn Anderson)

Georgia Secretary of State Brad Raffensperger speaks during a news conference on Monday, Nov. 30, 2020, in Atlanta. He was among the first Republicans to speak out against Trump’s false claims of voter fraud. (AP Photo/Brynn Anderson)

A top Republican election official in Georgia lashed out at President Donald Trump during a news conference Tuesday in Atlanta, blaming him for a flood of threats that have besieged his office and calling on the president and other Republicans to condemn the behavior.

Gabriel Sterling, a voting systems manager for Secretary of State Brad Raffensperger, was visibly angry and shaken as he approached a lectern in the Georgia Capitol Tuesday.

He added: “That shouldn’t be too much to ask for people who ask us to give them responsibility.”

Sterling’s public chastisement represents one of the strongest rebukes yet of Trump’s baseless attacks on the election’s integrity by a member of his own party.

The episode revealed a fissure that has been widening within the Republican Party for weeks as Trump has claimed falsely, again and again, that President-elect Joe Biden won through election fraud.

Although more and more local and state Republicans have acknowledged Biden’s victory - and said they have seen no evidence of widespread fraud - most national GOP officials, including Georgia’s two U.S. senators seeking reelection in twin runoffs on Jan. 5, have refused to do so.

In addition to calling out Trump by name, Sterling also demanded that the two senators, David Perdue and Kelly Loeffler, denounce the threats that flowed into his office after Trump began attacking Raffensperger for failing to repeat his false accusations of fraud.

“When the president called Brad Raffensperger, who is a fine, upstanding, lifelong Republican, an ‘enemy of the people,’ that helped open the floodgates to this kind of crap,” Sterling said. “It takes people who are already spun up . . . There are some nut balls out there.”

A Perdue spokeswoman, Casey Black, said in a statement that her boss “condemns violence of any kind, against anybody. Period.” But she added: “We won’t apologize for addressing the obvious issues with the way our state conducts its elections.”

A Loeffler spokesman tweeted that it is “ridiculous” to suggest the senator wouldn’t condemn physical threats, but said the senator “won’t apologize” for calling out “inaction and lack of accountability.

And Trump campaign spokesman Tim Murtaugh said the campaign condemns threats or violence “if that has happened” - but remains “focused on ensuring that all legal votes are counted and all illegal votes are not.”

Neither senator has offered any evidence of fraud or mismanagement by Raffensperger, nor a rationale for their call for his resignation, which came after Trump began attacking him and Gov. Brian Kemp, also a Republican, for their failure to support the president’s claims of fraud. Trump is scheduled to travel to Georgia on Saturday to campaign on behalf of Loeffler and Perdue.

Earlier Tuesday, Senate Majority Leader Mitch McConnell, R-Ky., refused to take any questions about the presidential election or Trump’s claims, talking only about legislation that Congress is trying to pass this month. “The future will take care of itself,” McConnell told reporters, when pressed about Trump’s statements.

Sterling, 50, is a Georgia native, a graduate of the University of Georgia and a Republican who has worked as a political consultant and served on the Sandy Springs City Council, north of Atlanta.

Raffensperger, his boss, was among the first Republicans to speak out against Trump’s false claims of voter fraud, defending the integrity of Georgia’s elections and calling out Sen. Lindsey Graham, R-S.C., for suggesting that he find a way to invalidate of tens of thousands of legally cast absentee ballots.

That stance has drawn a fusillade of online attacks and personal threats against the secretary of state and others in his office.

But Sterling said Tuesday that for him, the last straw came when a 20-year-old technician for the state’s voting machine contractor, Dominion Voting Systems, was targeted by far-right social media users who falsely claimed they’d caught him on camera manipulating election data. Some people called for the worker’s imprisonment, torture or execution. One tweet accused him of treason and included an animated image of a hanging noose.

When Sterling stepped to the lectern inside the Georgia Capitol Tuesday afternoon, he was noticeably upset.

“This kid took a job,” he added, his voice growing louder. “He just took a job. And it’s just wrong. I can’t begin to explain the level of anger I have right now over this. Every American, every Georgian, Republican or Democrat alike, should have the same level of anger.”

Sterling specifically called out Joseph diGenova, a conservative lawyer and Trump ally who on Monday appeared to call for the execution of former cybersecurity official Christopher Krebs during an appearance on a radio talk show. DiGenova later said he was joking.

Sterling said he was off script and at one point quipped, “I’ve probably stepped out of line, but I’m kind of pissed.”

But Raffensperger gave Sterling the green light to speak his mind, Jordan Fuchs, a deputy secretary of state, said in an interview. “We pointed him in a direction and said, ‘Just do your thing.’”

Fuchs said Raffensperger’s wife, Tricia, has received “sexualized death threats.” Members of far-right groups have been found trespassing at the Raffenspergers’ home. Someone broke into one of their adult children’s home and turned all the lights on, “sending a clear signal that they can get access to their house,” Fuchs said. And members of her staff have had to filter through “thousands” of emails saying, “You should be shot” and “You should be hanged,” she said.

All of it has left her and her colleagues bewildered by and infuriated with their own party.

Sterling also had another message for Trump Tuesday that Republicans in Washington have been unwilling to deliver: The election is over.

“Mr. President, as the secretary said yesterday, people aren’t giving you the best advice on what’s actually going on on the ground,” he said. “It’s time to look forward. If you want to run for reelection in four years, fine, do it. But everything we’re seeing right now - there’s not a path.”

Sterling declined to name the Dominion employee who had been threatened. The individual’s name was surfaced by Ron Watkins, whose father, Jim, owns the far-right Internet message board 8kun, which has been linked to white supremacism, neo-Nazism and QAnon.

Shortly after midnight Tuesday, Watkins posted what he called “a smoking-gun video” that he claimed showed the Dominion worker manipulating Georgia voting data.

In fact, the undated video - which was recorded at a distance and includes a man and woman offering ongoing commentary of the “nerd boy” as he works inside an election office - shows a man simply using a computer and thumb drive.