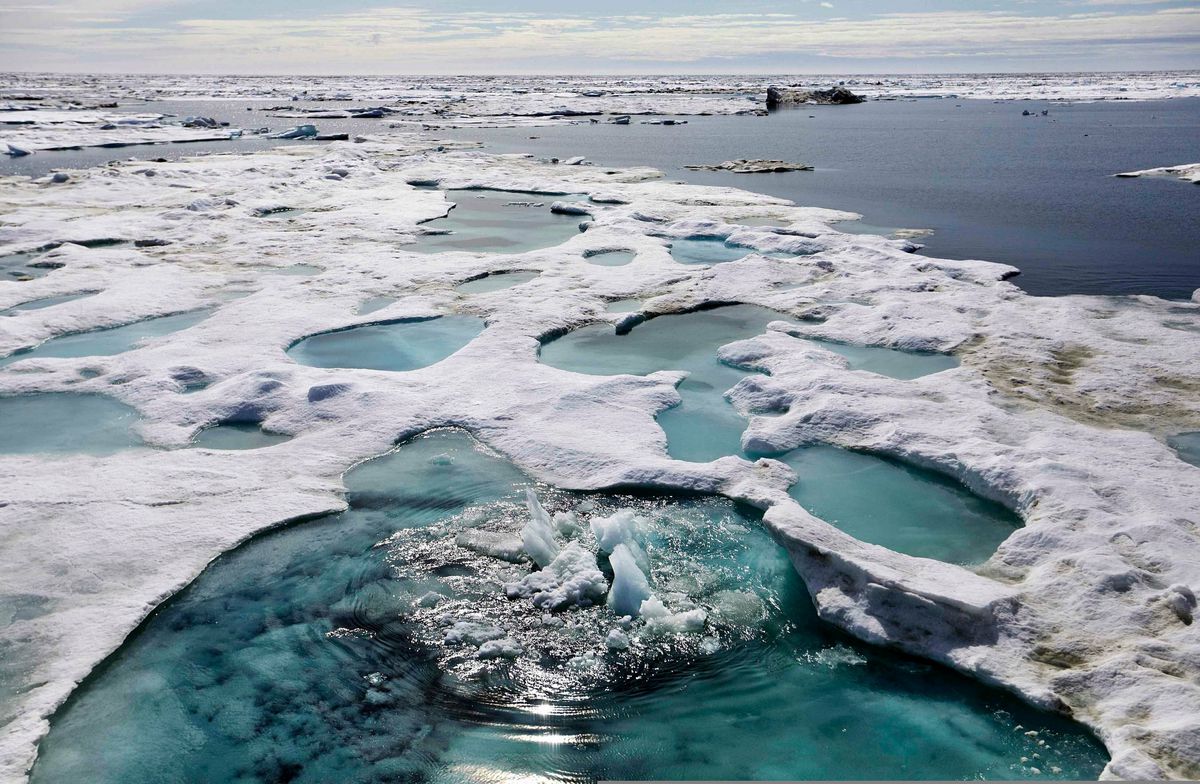 FILE - In this July 16, 2017, file photo, ice is broken up by the passing of the Finnish icebreaker MSV Nordica as it sails through the Beaufort Sea off the coast of Alaska. (AP Photo/David Goldman, File)

FILE - In this July 16, 2017, file photo, ice is broken up by the passing of the Finnish icebreaker MSV Nordica as it sails through the Beaufort Sea off the coast of Alaska. (AP Photo/David Goldman, File)

The Arctic as we once knew it, an inhospitable, barely accessible and icebound place, is gone. Climate change has transformed it into a region that can heat up to 100 degrees, is beset by ferocious wildfires, and is covered in permafrost that is no longer permanent. The sea ice cover that has long defined the Far North is fast disappearing. This is the picture from a new international scientific assessment released Tuesday.

The 2020 Arctic Report Card, a report led by the National Oceanic and Atmospheric Administration (NOAA) involving 133 scientists from 15 countries, points to a slew of trends that with each passing year have grown more extreme and have far-reaching implications for people living far outside the region, including in the Lower 48 states.

The Arctic as a whole is warming at nearly three times the rate of the rest of the world, owing to feedback loops between snow, ice and land cover.

This rapid warming, studies have shown, is largely the result of increased emissions of greenhouse gases from the burning of fossil fuels, such as coal, oil and natural gas.

This year, the biggest Arctic climate extremes were the persistent, dramatically warmer than average conditions in the Siberian Arctic, which had a domino effect that led to record low sea ice in the adjacent Kara and Laptev Seas, a wildfire season that defied historic norms, melting permafrost and changes in wildlife populations.

“Taken as a whole, across a variety of disciplines and viewpoints, the story is unambiguous: the transformation of the Arctic to a warmer, less frozen and biologically changed region is well underway,” the report states.

The report cards, which began in 2006, provide a window into how swiftly the Far North is changing, in many cases catching the scientists who study the unique ecosystems off guard.

“When the report card series started back in 2006, in my view the Arctic was getting around a ‘C-minus,” said Mark Serreze, the director of the National Snow and Ice Data Center in Boulder, Colo., in an email. “Sea ice extent was clearly on its way down, and Arctic temperatures were clearly rising.”

“But then came 2007, when September sea ice extent didn’t just drop to a new record low, it blew away the old record. In may ways, 2007 was the beginning of the ‘new Arctic.’ Since 2007 it been one piece of bad news after another. The Arctic is quickly losing its ice, and as it loses its ice, it loses its soul. In terms of a report card, the Arctic has been failing for a long time, and the blame lies on us.”

In 2020, the Arctic saw its second-lowest sea ice extent at the end of the melt season, and temperature over the region for was four degrees (2.2 Celsius) warmer than the 1981-2010 average, the report says. This means the year was the second-hottest on record for the Arctic since at least 1900, and 9 of the past 10 years were at least 1.8 degrees (1 Celsius) above average.

In Siberia and other parts of the boreal forest, the world’s largest terrestrial biome, new spikes in wildfire ferocity, changes in fire locations, and an extension of the fire season was seen this year, though there is considerable variability from year-to-year, the report states.

The extreme wildfires in Russia’s Sakha Republic show what can happen when extremely warm spring and summer air temperatures melt snow far earlier than is typical, drying out vegetation, or fuels, for wildfires in the process. “We’re moving from fire-resistant to fire-prone,” said Jessica McCarty, who studies Arctic fires at Miami University of Ohio, in an interview. McCarty did not contribute to the new report.

Global attention on the warmth in Eurasia came when the town of Verkhoyansk, about 3,000 miles east of Moscow, reached 100.4 degrees (38 Celsius) on June 20, which would be a record high temperature for the Arctic since such data began in 1885.

The unusual warmth seen in Siberia this past spring and summer has had lingering effects, with the delayed freeze up of sea ice in parts of the Arctic Ocean north of Siberia, and continued abnormally warm temperatures across land areas. The consistent Siberian hot spot, given its size, is having a major impact on the average temperature of the planet in 2020, which is making a run at the top spot on the list of hottest years on record.

Merritt Turetsky, an ecologist at the University of Colorado at Boulder, said some of her research sites in Arctic boreal forests and tundra are going through “the most rapid climate change on Earth.”

She said the Siberian fires of 2020 are an example of an Arctic climate change trend that was not entirely unexpected but has happened much faster than previously anticipated.

“Because of a prolonged heat spell in the Russian Arctic for the most part of 2020, the fire season started early, ended late, released an enormous amount of greenhouse gases through biomass burning, and thawed some of the world’s most sensitive permafrost,” Turetsky said.

Climate change speeds up when these greenhouse gases, including the potent warming agent methane, are released into the atmosphere.

“In 2020, tundra and other vegetation types that tend to be fire-resistant far north of the Arctic Circle burned from May until at least September. We know that this burning will have big consequences for the stability of this ice-rich permafrost for decades, but all we can do is watch and monitor,” Turetsky said.

While many iconic Arctic species, such as walruses and polar bears, are threatened by sea ice loss and changing availability and timing of snowfall, among other trends, one species that seems to be benefiting is the bowhead whale, the report said.

The whale species, which is the only truly Arctic baleen whale and a staple of indigenous peoples’ diets, is finding food to be more abundant thanks to increases in the amount of open water. The waters allow more sunlight to be absorbed by the sea, contributing to increases in species at the base of the food chain that comprise the whales’ diet, such as various species of plankton.

The report cites population increases in the Pacific Arctic in particular as being tied to increases in what is known as ocean primary productivity, which refers to the amount of biological activity taking place in the water, as well as the northward movement in zooplankton.

This year was also a landmark period for Arctic scientific observations, with the completion of a challenging research project to find out more about the poorly observed Arctic environment. In September, the Multidisciplinary drifting Observatory for the Study of Arctic Climate (MOSAiC) project finished an unprecedented expedition in which a ship was intentionally entombed within the Arctic sea ice pack to collect data to advance the understanding and modeling of the Arctic environment.