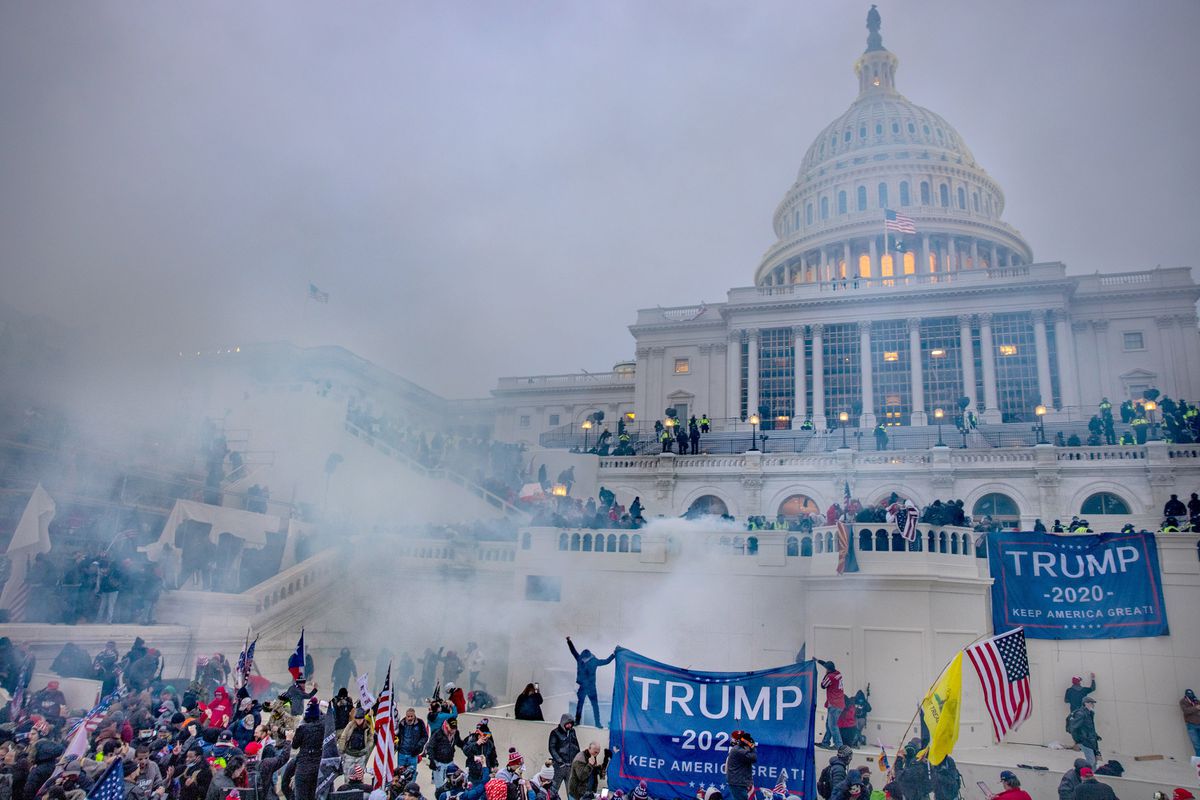 Tear gas engulfs the crowd in front of the Capitol. (Photo for The Washington Post by Evelyn Hockstein)

Tear gas engulfs the crowd in front of the Capitol. (Photo for The Washington Post by Evelyn Hockstein)

WASHINGTON - One sure sign that the violence that wracked the Capitol on Wednesday was broadly unacceptable to President Donald Trump’s usual allies was how quickly some blamed people other than the president and his base of supporters.

From the House floor, Rep. Matt Gaetz, R-Fla., a Trump ally, cited “pretty compelling evidence from a facial recognition company” that he claimed showed that “some of the people who breached the Capitol today were not Trump supporters.” Instead, they were “masquerading as Trump supporters and, in fact, were members of the violent terrorist group antifa.”

Antifa is a frequent target of Trump’s. The loose-knit ideology isn’t generally manifested in any sort of formal organization, but that very nebulousness has allowed Trump and others to use it as a blanket descriptor for any person or group that can be cast as left-wing and dangerous. Hence Gaetz’s elevation of the claim: If someone somewhere is doing something that is a problem for the country, Trump or someone linked to him will probably finagle an antifa allegation into the mix.

Gaetz wasn’t alone. On Fox News Channel’s prime-time shows, hosts and guests similarly claimed that perhaps the mob was spurred on by antifa. The fringier networks that have blossomed in the wake of the election made similar claims.

The genesis for the assertion appears to be an article published by the right-wing Washington Times claiming that a “retired military officer” had provided information from a firm called XRVision that used facial recognition software to identify several people who invaded the Capitol - and that two of them were linked to antifa. A third was “someone who shows up at climate and Black Lives Matter protests in the West.”

In a statement to The Washington Post, XRVision executive Yaacov Apelbaum denied that his firm had provided any such analysis.

“XRVision didn’t generate any composites or detection imagery for the Washington Times nor for a ‘retired military officer,’ " Apelbaum said, “and did not authorize them to make any such representations.”

What happened, Apelbaum explained, was that the firm “performed an analysis on the footage” and, in doing so, was able to identify three people.

“We concluded that two of individuals . . . were affiliated with the Maryland Skinheads and the National Socialist Movements,” the firm determined. “These two are known Nazi organizations, they are not Antifa. The third individual identified . . . was an actor with some QAnon promotion history. Again, no Antifa identification was made for him either.”

XRVision did create graphics comparing people who had been at the Capitol with other photographs, Apelbaum said, which “were distributed to a handful of individuals for their private consumption and not for publication.”

One of the graphics includes a photograph of two people that can also be found on the website Philly Antifa. As noted by Twitter user Respectable Lawyer, though, the reason the photo of those people is on the website isn’t that they are antifa, but that they were believed to be fascists. That’s the “fa” in antifa: The ideology is predicated on combating fascism.

Somehow, the identification by XRVision - which, we should note, is itself not confirmed - was blended with the antifa website, perhaps by searching for the people’s names on the internet. That became “these two guys are antifa” when it appears that, instead, they were targeted by antifa adherents as opponents. Someone then shared that incorrect connection with the Times. (Apelbaum’s statement asserts that they’ve demanded the Times retract its story. The Times removed the story, which can still be seen at the Internet Archive.)

[After excusing violence by his supporters, Trump acknowledges election loss]

If there’s a silver lining to this claim that antifa was somehow involved in the mob’s actions, it’s that it is at least rooted in something resembling evidence. It’s wrong, but at least it’s not simply unsubstantiated rumors without any attempt at verification.

For that, we turn to Rep. Mo Brooks. R-Ala., who tweeted:

“Please, don’t be like #FakeNewsMedia, don’t rush to judgment on assault on Capitol. Wait for investigation. All may not be (and likely is not) what appears. Evidence growing that fascist ANTIFA orchestrated Capitol attack with clever mob control tactics. Evidence follows:”

The evidence that followed:

1. A member of Congress told him that there was an antifa threat.

2. A member of Congress told him that a Capitol Police officer speculated that antifa might infiltrate the pro-Trump crowd.

3. Capitol Police advised against leaving the Capitol complex on Tuesday.

4. A vague reference to other evidence.

With all due respect to the gentleman from Alabama, none of that is evidence. It is all hearsay, and not even necessarily hearsay that bolsters the point. The identity of the congressman or -men providing those warnings to Brooks is not disclosed, but anyone familiar with recent events can probably identify some likely contenders.

What we know about the crowd at the Capitol was that many, if not most, were wearing clothing or carrying flags that identified them as Trump supporters. We know that Trump viewed them as allies to the extent that he posted a video on Twitter in which he expressed “love” for them. We know, too, that there was some anti-antifa sentiment on display from the group.

Even if it were the case that two demonstrated members of antifa were among the mob Wednesday, it’s hard to see how that shifts responsibility for what occurred away from Trump’s supporters. It’s analogous to Trump’s claims two years ago that the presence of possible terrorists in immigrants arriving at the U.S.-Mexico border precipitated a crisis demanding the construction of a wall. There was never robust evidence of any such threat, but it was nonetheless effective at casting immigrants to the United States in a more nefarious light.

The best evidence for what motivated those who stormed the Capitol is their own presentation of their motivation. Multiple news reports have captured it directly: They were spurred by the false idea - spread by Trump, his allies and conservative media - that the election had been stolen.

It is safe to assume, in other words, that Fox News bears more culpability for the collapse of order on Wednesday than does antifa.