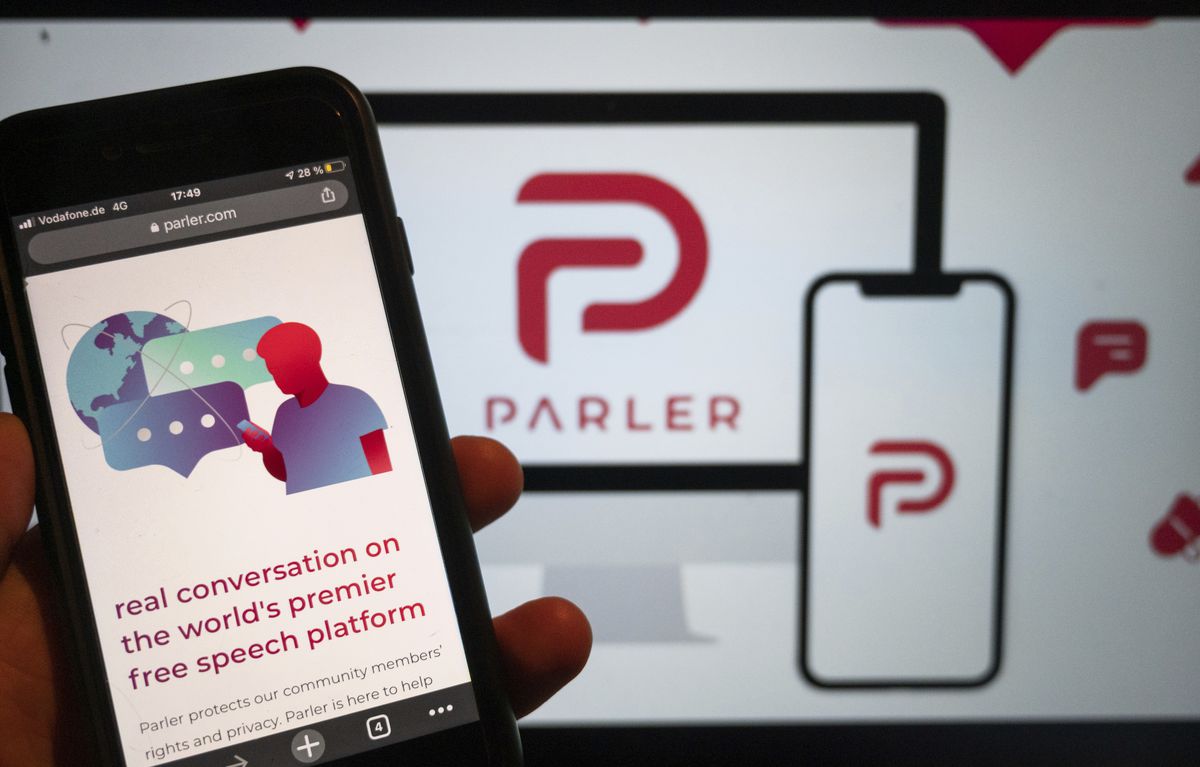 The website of the social media platform Parler is displayed in Berlin, Jan. 10, 2021. The platform's logo is on a screen in the background. The conservative-friendly social network Parler was booted off the internet Monday, Jan. 11, over ties to last week's siege on the U.S. Capitol, but not before hackers made off with an archive of its posts, including any that might have helped organize or document the riot. (Christophe Gateau/dpa via AP)

The website of the social media platform Parler is displayed in Berlin, Jan. 10, 2021. The platform's logo is on a screen in the background. The conservative-friendly social network Parler was booted off the internet Monday, Jan. 11, over ties to last week's siege on the U.S. Capitol, but not before hackers made off with an archive of its posts, including any that might have helped organize or document the riot. (Christophe Gateau/dpa via AP)

WASHINGTON - The chairwoman of the House Oversight and Reform Committee on Thursday asked the FBI to conduct a “robust examination” of the alleged role in the Jan. 6 Capitol siege of Parler, the now-disabled social media site that bristled with violent chatter before and after rioters stormed the Capitol in a rampage that left five people dead.

Rep. Carolyn Maloney, D-N.Y., the chairwoman, said the request is a step toward opening a formal committee investigation into sites that may encourage violence, including Parler. It became prominent last year as a freewheeling alternative to Twitter, gaining popularity in particular among conservatives.

She said the committee will begin its own formal investigation of Parler and similar sites, and that it was a “top priority” for her to learn answers to a range of questions about Parler, including its alleged ties to Russia, as documented in news reports. Her letter to FBI Director Christopher Wray Thursday singled out Parler’s use of a Russian-owned web services company, DDoS-Guard, that also has Russian government clients and may leave Parler vulnerable to data requests by Russian agencies.

“I am going to get to the bottom of who owns and funds social media platforms like Parler that condone and create violence,” Maloney said in an interview with The Washington Post.

In response to Maloney’s letter, Parler Chief Operating Officer Jeffrey Wernick said in a statement to The Post, “Like other social-media platforms, we have been cooperating and will continue to cooperate with law-enforcement efforts to identify and prosecute those individuals responsible for organizing and carrying out the shameless Jan. 6 attack on the Capitol. Parler welcomes Rep. Maloney’s call to have the Federal Bureau of Investigation conduct a robust examination of our policies and actions.”

Parler previously has described its ownership and leadership as based in the United States, with conservative financier Rebekah Mercer and commentator Dan Bongino among its investors. It hired DDoS-Guard to protect it from cyberattacks after Amazon Web Services suspended Parler for having inadequate moderation policies, citing in a legal filing what it said was the site’s “unwillingness and inability” to remove content “inciting and planning the rape, torture, and assassination of named public officials and private citizens.”

The move knocked Parler offline, further clouding its future after Apple and Google also had removed it from their app stores for similar policy violations. It has struggled to get back online, but its officers have vowed to do so.

Parler’s legal fight to force Amazon to restore its service suffered a setback on Thursday when a federal district judge in Seattle denied Parler’s request for a preliminary injunction.

“Our return is inevitable due to hard work, and persistence against all odds. Despite the threats and harassment not one Parler employee has quit. We are becoming closer and stronger as a team,” chief executive John Matze wrote in a post Monday. As the letter from Maloney noted, Matze is married to a Russian woman, a fact previously noted in numerous news reports that raised the issue without documenting improper influence over the company.

Maloney’s letter called on the bureau to “conduct a robust examination of the role that the social media site Parler played in the assault, including as a potential facilitator of planning and incitement related to the violence.”

The FBI national press office said in a statement to The Post: “We have received the letter and are reviewing.”

DDoS-Guard did not respond immediately to a request for comment Thursday, but officials with the company said in a statement Tuesday, “At this time, Parler.com does not violate either our Acceptable Use Policy or the current US law to the best of our knowledge.”

Congress has wide-ranging authority to inquire about private companies, but Parler and other social media sites also enjoy broad legal immunity for what others post on their platforms through Section 230 of the Communications Decency Act. While there is ample evidence of hateful conversation ahead of the attack on the Capitol and calls for violence against members of Congress, those were made by Parler’s users - many of them using pseudonyms - a fact limiting Parler’s responsibility.

The company, based in Henderson, Nev., and founded in 2018, has engaged in limited moderation, using panels of users to review potentially problematic posts while portraying itself as a haven for free speech at a time of rising restrictions and enforcement on mainstream platforms such as Twitter, Facebook and YouTube.

Parler refused to remove accounts affiliated with Russian influence operations documented in October by research firm Graphika, saying that no government authority had asked it do so.

Maloney wrote in her letter: “The company was founded by John Matze shortly after he traveled in Russia with his wife, who is Russian and whose family reportedly has ties to the Russian government. Concerns about the company’s connections to Russia have grown since the company re-emerged on a Russian hosting service, DDoS-Guard.”

She wrote the Russian company “has ties to the Russian government and hosts the websites of other far-right extremist groups, as well as the terrorist group Hamas.”

DDoS-Guard stopped protecting the Hamas website in November, according to SITE Intelligence Group.

The new Congress is only just forming, but Maloney made it clear in her interview with The Post that studying Parler is a priority for the investigative oversight panel. Maloney has a long-standing interest in possible foreign support of U.S. companies. In December, legislation she has championed for years was passed into law requiring more disclosure for shell companies.

The new law will require shell companies to provide the names of their owners or face stiff penalties and jail sentences. The Corporate Transparency Act mandates that information about shell companies be stored in a confidential database accessible to federal law enforcement and shared with banks, which are often unwitting accomplices to international corruption and terrorism.