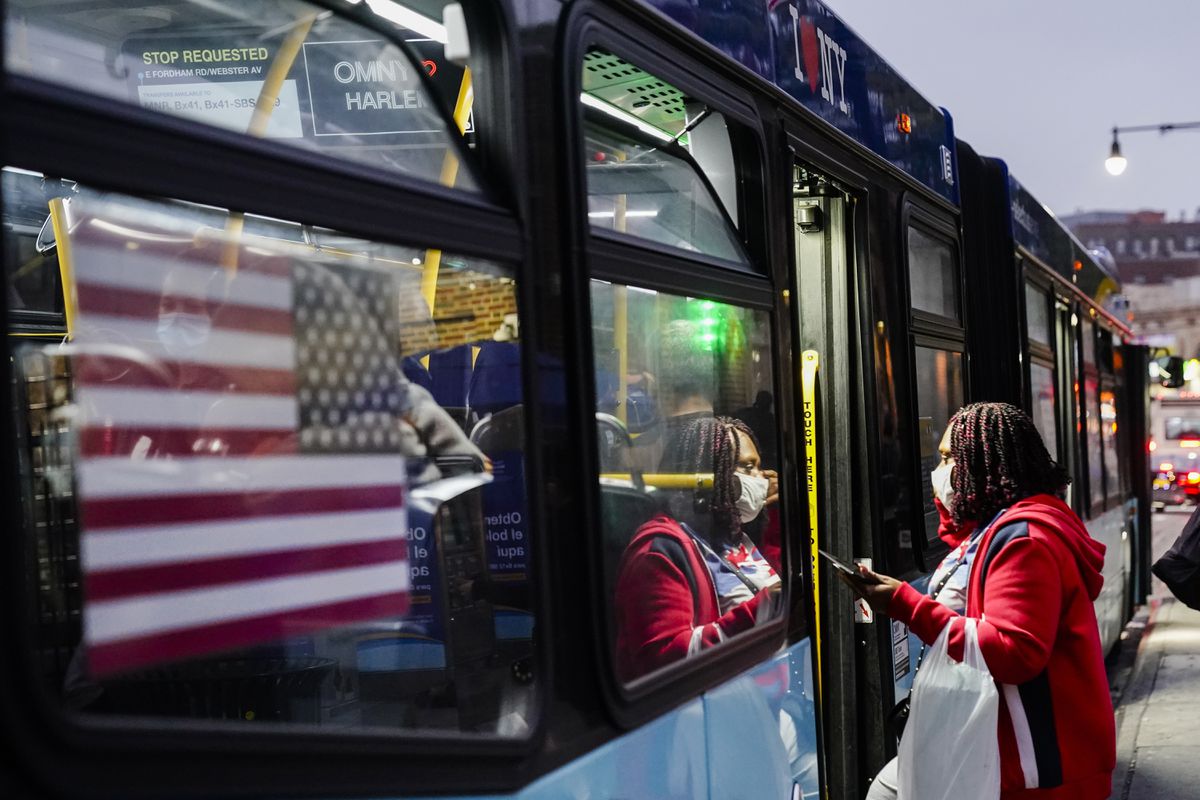 WASHINGTON - Masks must be worn at train and subway stations, bus terminals and airports nationwide, as well as on planes, trains and other types of public transportation in the United States, according to a far-reaching federal public health order issued late Friday.

The order, which will take effect Monday at 11:59 p.m., adds details to the mandate President Joe Biden signed on his first full day in office.

The order goes beyond the “masking for interstate travel” previously announced by the White House.

A key objective, it said, is “preservation of human life.”

“Requiring masks on our transportation systems will protect Americans and provide confidence that we can once again travel safely even during this pandemic,” according to the order from the Centers for Disease Control and Prevention. “Therefore, requiring masks will help us control this pandemic and aid in re-opening America’s economy.”

It lists exemptions for people with disabilities who cannot wear a mask and other cases, and said masks can be removed briefly while eating, drinking, taking medication, going through security screenings and other circumstances.

The order said operators “must use best efforts” to ensure masks are worn, including “at the earliest opportunity, disembarking any person who refuses to comply.” It said enforcement will be handled by the Transportation Security Administration and “by other federal authorities and may be enforced by cooperating state and local authorities.”

The CDC prepared a transportation mask requirement last year, but was blocked by the Trump White House. Breaking from his predecessor, Biden on Jan. 21 instructed the departments of Transportation, Labor, Homeland Security and other agencies to take immediate action “to require masks to be worn in compliance with CDC guidelines” covering transportation.

Hours after his inauguration, Biden also issued an order requiring masks on federal property, though many details of how it will be implemented remain unclear. Together, the moves were seen as the closest Biden could come to a national mask mandate.

Scientists say masks are among the most effective tools for slowing the uncontrolled spread of the coronavirus, which has killed more than 430,000 people in the United States.

But Biden sought to begin cracking that dynamic, reiterating his message that mask-wearing is a patriotic act. “The experts say by wearing a mask from now until April, we’d save more than 50,000 lives going forward,” Biden said.

Airlines have been a particularly fraught venue for mask conflicts, with a small but unrelenting stream of passengers refusing to mask up, despite long periods in close quarters. Safety reports filed with the federal government show flight attendants being taunted, cursed and ignored by passengers, some of whom called the virus a hoax.

Although airlines have banned hundreds of people from flying during the pandemic because they refuse to abide by company mask requirements, flight attendants and other aviation workers have long called for more government action to ensure safe travel during the pandemic.

A key piece of Biden’s mask effort will fall to the nation’s airline regulator.

The FAA has previously deferred to airlines on masks, and administrator Stephen Dickson told senators at a June hearing “we do not plan to provide an enforcement specifically on that issue.” He said at the time that “our space is in aviation safety, and their space is in public health,” referring to the CDC and other health officials. On Dec. 18, the FAA issued a statement declaring that “failure to wear a face covering is not itself a federal violation.”

But on Friday the agency said it is “committed to ensuring commercial airline passengers comply with President Biden’s face mask mandate throughout their journey from curb-to-curb.” In a statement, the FAA said it is coordinating with other federal agencies, airlines, unions and airports and is “strictly enforcing a zero-tolerance policy toward passengers who cause disturbances on flights or fail to obey flight crew instructions.”

It is unclear to what extent the FAA will rely on its existing framework for punishing unruly passengers. There have been 100 to 200 such cases annually in most recent years, according to agency data.

The Department of Transportation said in a statement that it has been coordinating with ground transportation officials and others around the country, describing CDC and TSA plans regarding masks, and working through its own potential regulatory issues. “After hearing directly from stakeholders and reviewing their comments, the Department will determine any next steps that it intends to take,” the statement said.

The TSA did not respond to a request earlier Friday for comment on its implementation plans.