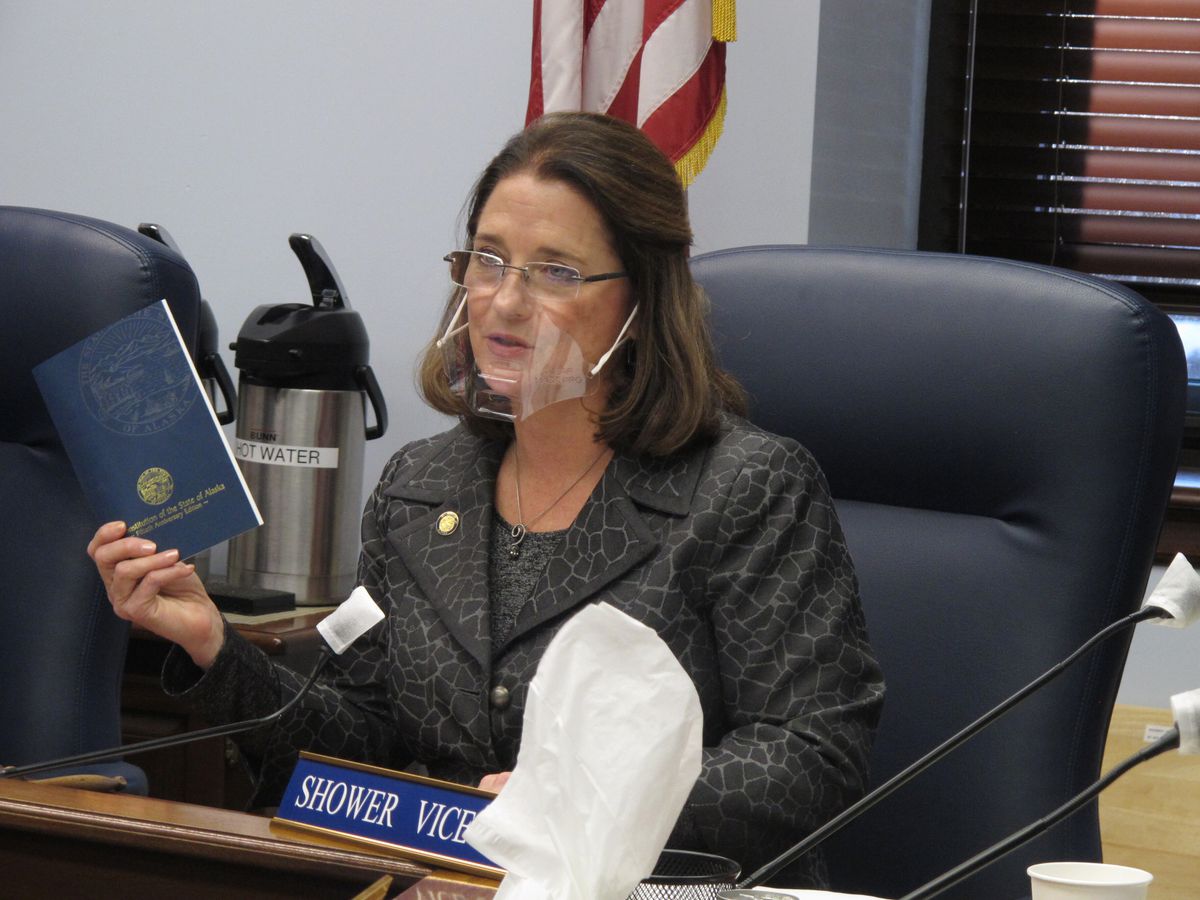 Alaska state Sen. Lora Reinbold, an Eagle River Republican, holds a copy of the Alaska Constitution during a committee hearing on Wednesday, Jan. 27, 2021, in Juneau, Alaska. Gov. Mike Dunleavy, a Republican, sent Reinbold a letter on Feb. 18, 2021, saying she has used her position to "misrepresent" the state's COVID-19 response. Reinbold said the letter was "full of baseless accusations and complaints." (AP Photo/Becky Bohrer)

Alaska state Sen. Lora Reinbold, an Eagle River Republican, holds a copy of the Alaska Constitution during a committee hearing on Wednesday, Jan. 27, 2021, in Juneau, Alaska. Gov. Mike Dunleavy, a Republican, sent Reinbold a letter on Feb. 18, 2021, saying she has used her position to "misrepresent" the state's COVID-19 response. Reinbold said the letter was "full of baseless accusations and complaints." (AP Photo/Becky Bohrer)

Many Republican lawmakers nationally have criticized governors’ emergency restrictions since the start of the coronavirus outbreak. Now that most legislatures are back in session, a new type of pushback is taking root: misinformation.

In their own comments or by inviting skeptics to testify at legislative hearings, some GOP state lawmakers are using their platform to promote false information about the virus, the steps needed to limit its spread and the vaccines that will pull the nation out of the pandemic.

In some cases, the misstatements have faced swift backlash, even getting censored online. That’s raised tough questions about how aggressively to combat potentially dangerous misinformation from elected officials or during legislative hearings while protecting free speech and people’s access to government.

Last week, YouTube pulled down a video of committee testimony in the Ohio House after a witness inaccurately claimed COVID-19 wasn’t killing children. The platform said the video violated its community standards against the spread of misinformation.

“When we’re talking about testimony that occurred at a public hearing, the far better response would be counterspeech, maybe in the form of fact-checking or labeling, rather than this attempt to flush it down the memory hole,” Wizner said.

In Michigan, for example, the House Oversight Committee didn’t include state health officials or other virus experts in a discussion about an extended pause on youth contact sports ordered by Democratic Gov. Gretchen Whitmer.

It did feature Jayme McElvany, a virus skeptic who also has posted about the QAnon conspiracy and former President Donald Trump’s unfounded claims of election fraud. Founder of a group called Let Them Play, McElvany questioned mask mandates and the science behind state COVID-19 data during a legislative hearing that didn’t feature any witnesses from the other side.

Wizner said such imbalances need to be highlighted, not suppressed.

“People need to know this is what passes for local government,” he said. When the hearings are posted online, YouTube owner Google has plenty of tools for flagging questionable information and directing people to facts, Wizner said.

In Tennessee, a Republican lawmaker is pushing legislation that would ban most government agencies from requiring anyone to get COVID-19 vaccines, which isn’t a mandate anywhere. Rep. Bud Hulsey has tried to drum up support downplaying the seriousness of the disease.

While testifying, he ticked off selective statistics that COVID-19 has a lower death rate among children and falsely alleged that the vaccines could cause genetic modifications.

Hulsey faced pushback from a fellow Republican, Rep. Sabi Kumar, a surgeon who has been a rare GOP advocate for proper mask-wearing while lawmakers gather at the Tennessee Capitol.

“The concern I have is that (the bill) creates an anti-vaccine attitude,” Kumar said.

Kumar pointed out that vaccines have saved countless lives throughout the centuries and repeatedly fact-checked Hulsey by emphasizing that the vaccines don’t change a person’s DNA.

“People have seen governments all across this country do things that have never ever happened in the history of the United States, and it scares them,” he said. “They have every right to be afraid.”

His bill has advanced out of a House subcommittee.

In Alaska, Gov. Mike Dunleavy is fighting what he called a pattern of misrepresentations by state Sen. Lora Reinbold, a fellow Republican, saying he would no longer send members of his administration before her Senate Judiciary Committee.

In a scathing Feb. 18 letter that referenced her Facebook posts, Dunleavy accused Reinbold of misrepresenting the state’s COVID-19 response and deceiving the public.

“The misinformation must end,” the governor wrote.

Reinbold has been a vocal critic of Dunleavy issuing disaster declarations while the Legislature wasn’t in session. She has used her committee to amplify voices of those who question the effectiveness of masks and the effects of the government’s emergency response.

On social media, she characterized the Dunleavy administration as being “wild” over “these experimental” vaccines. At a hearing in early February, Reinbold questioned the extent to which the administration had suspended regulations during the pandemic.

The governor said that while he has tried to ease rules on businesses such as suspending fees, he’s never imposed martial law or forced Alaskans to get vaccines. Reinbold has called the governor’s criticism of her baseless.

“Some call ‘misinformation’ information they do not agree with or do not want to hear,” Reinbold said by email.

The dustup prompted intervention by the Senate president, who said he expected his committees to provide a “balanced approach.”

In Idaho, Rep. Heather Scott opened the legislative session in January by declaring, “The pandemic is over.” She said Idaho’s 1,600-plus COVID-19 deaths at that time amounted to “nowhere close to a pandemic.”

The average number of daily COVID-19 cases is falling in Idaho, but the death toll has risen.

During a live Zoom forum with constituents in mid-February, Scott criticized the National Governors Association, which last year issued a statement with tips for fighting misinformation about the virus. She alleged that the group is run by “globalists” at the World Economic Forum and that “they are the ones that came out with COVID.” The term “globalists” is widely considered to be an anti-Semitic slur.

Scott didn’t immediately respond to a message seeking clarification on what she meant.

Several of those who are spreading bogus virus information in legislatures also have supported Trump’s false claims that the 2020 election was stolen.

In Virginia, Republican Del. Dave LaRock, who attended the Trump rally in Washington, D.C., that preceded the attack on the U.S. Capitol, warned a state House Health committee in late January that COVID-19 vaccines couldn’t be trusted. He said they were especially risky for several communities, including the elderly and people of color.

“There is legitimate vaccine hesitancy in communities that the gentleman listed, but actual and factual information is key, not fanning the flames that are based on historic events,” she said.